Park is a prodigiously talented young artist whose charcoal drawings pulsate with manic, freakish figures and imagery from the internet and contemporary culture in a social comment on the modern American dream 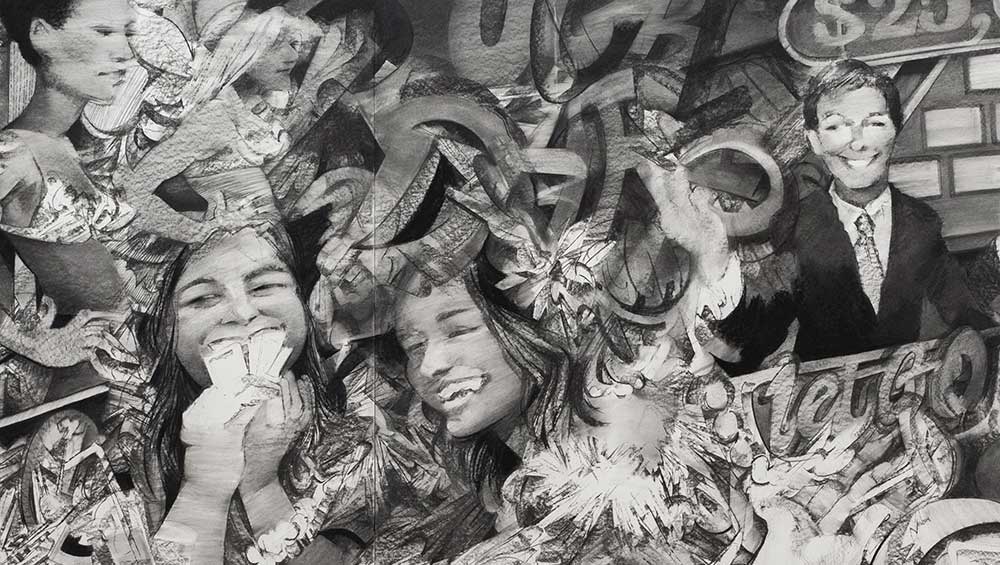 Anna Park (b1996 in Daegu, South Korea) is just a couple of years out of the New York Academy of Art (with its emphasis on painting and figuration). Her MFA in hand – actually, even before that – she dived headlong into the fray of the art world, making a tremendous splash. The articulate, prodigiously talented young artist had her first museum show this autumn at the Scad Museum of Art in Savannah, Georgia (on until 2 January 2023), curated by Daniel S Palmer, its new chief curator, as well as solos in Los Angeles (her show there at Blum & Poe, which now represents her, has just closed), Tokyo, Rome and New York. In addition, since 2018, she has participated in nearly three dozen group exhibitions in notable venues in the US and abroad, topped off by winning several coveted awards for artistic excellence.

Park says she likes to people-watch and she has done a lot of it, living in very different locations and cultural environments as she grew up. Born in South Korea, she found herself in New Zealand, California and Utah, spending a good part of her formative years in the latter, and now lives in Brooklyn, New York. She said that she sees herself as a spectator but also identifies with what she portrays, her torqued social commentaries an inversion (or the newest iteration) of the American dream, projections of how a generation sees itself. 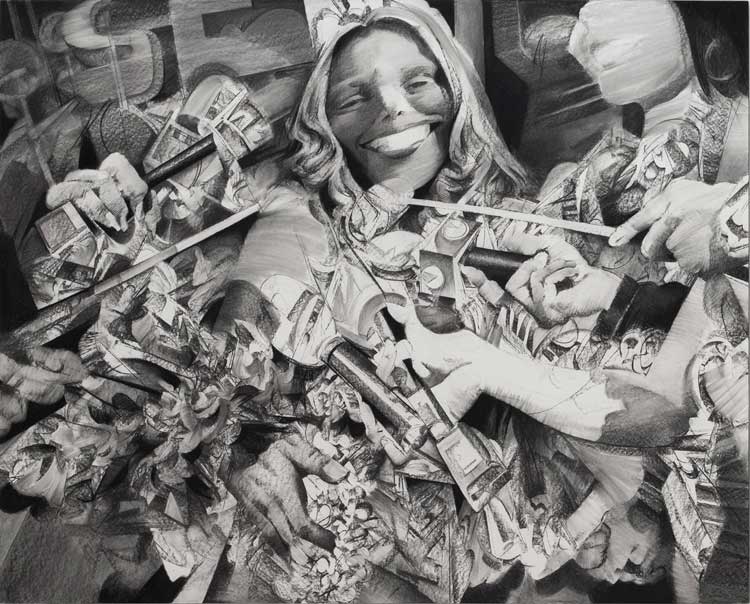 Park’s show at Scad is powerful, its rousing black-and-white drawings evoke comparisons to photographs from an earlier era, blown up. Although there are just five works on view, they command a lot of real estate, measuring from 1.5 metres x 1.8 metres (60in x 72in) (Now You See Me, 2021) to a supersized stretch of 4.6 metres (180in) (Last Call, which is also the title of the show). Made of charcoal on paper on panel, the friable charcoal, her signature medium, at least for now, is an unusual choice, especially at this scale, but Park likes to play, to experiment, not knowing in advance where it might lead, she said. And charcoal can be exceptionally nuanced as wielded by Park, the range and complex orchestration of its tonal gradations enriching, a tribute to her virtuosity. 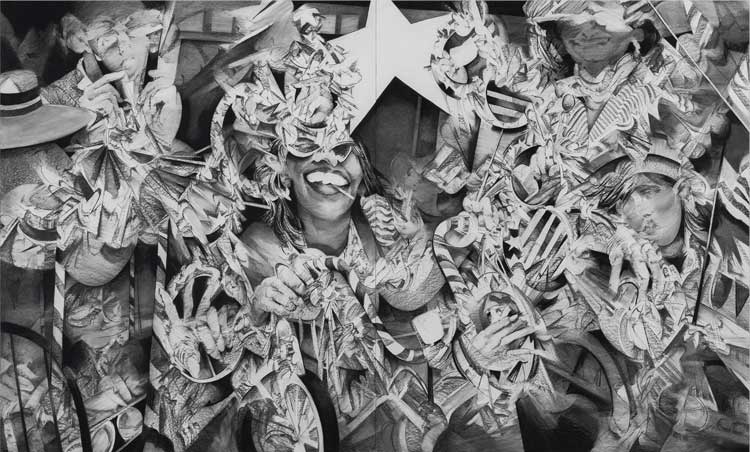 Her projects veer between the realistic and linear to the abstracted and expressive, a deft mix of the absurdist, the surreal, pop, cartoons, comics, graphic design, academic realism, abstraction and more to arrive at her own distinctive vision of the (ironic?) heroism of Millennial and Gen Z life. Baudelaire’s notion about the heroism of modern life and its relativism is echoed in the title of Hero Mentality, depicting current popular idolisations and fetishisations. (For context, these works were made in 2021 when thoughts that we were in the midst of an extinction event were just abating, and getting together in crowded conditions no longer a death wish). 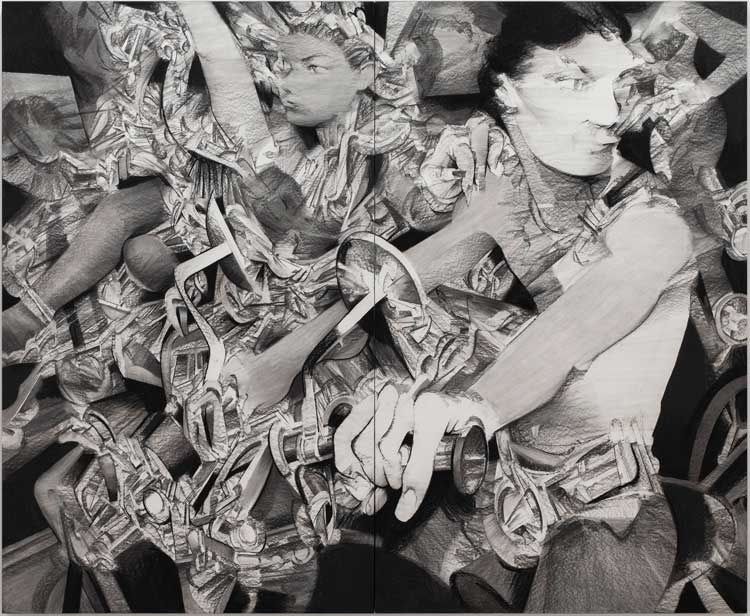 All Park’s titles seem double-edged. The rider/biker, the spotlight on him in Eyes on the Road, is picked out from the mass of people surrounding him. His gaze, watchful, perhaps furtive, perhaps simply diverted, is caught by something beyond the picture plane that might be the road not seen, about to be taken, or not, a symbolism that is universal but also particularly American, recalling Jack Kerouac’s On the Road, the 1957 cult classic that has launched countless road trips. Park characteristically leaves it open. In Now You See Me, the head of the central figure forms the top of a pyramidal composition, her eyes closed, in faked, ecstatic pleasure, flashing a white-capped, toothy celebrity smile for the press. However, hemmed in by a phalanx of mics pointing at her like spears, she seems as much prey as predator, cornered by clamorous, invisible interlocutors coming in for the kill. Upside down figures (recalling Georg Baselitz’s hallmark images) often appear in Park’s work, as in Free Fall, an upended enormous woman or girl, her head, petalled in a corona of blond locks, about to bang into the lower edge of the painting, as if exiting the womb, sliding out of the fictive plane on to the real floor, into the real world to greet us. 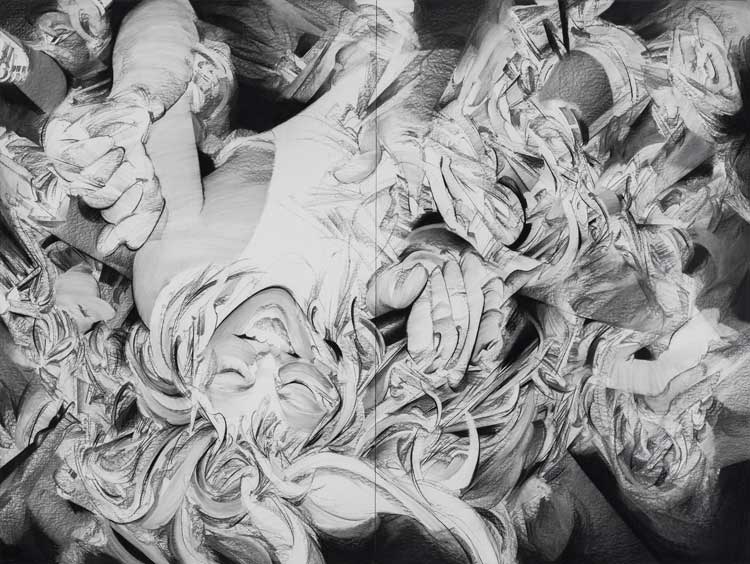 Park’s giddy, cacophonous (you can almost hear the din), all-over bacchanalias seem to beg for crowd control, bursting with manic, freakish figures revelling in a pile-up of objects, all desirability cancelled out, the jumbled oversupply making everything interchangeable, turning everything into trash, the Midas touch in reverse. The results, no doubt, are equally unpropitious. The miscellany of objects competing with the motley figures for space also seem to spill out of the picture into the actual space of the gallery. Last Call, her epic fantasia sourced from the internet and social media and more, sounds either a warning or an incentive to increased frenzy before lights out. This is party time cast in a darker, ambiguous mode.