A major exhibition of new works by the German artist Georg Baselitz (b1938) is showing in London at White Cube. Wir fahren aus (We’re off) spans the entire gallery space, including large-scale paintings, bronze sculpture and an extensive body of works on paper.  This is Baselitz’s first solo exhibition at White Cube Bermondsey, although the London public has had the opportunity to view the major retrospective at the Royal Academy in 2007 and his early work at the British Museum in 2014 in Germany Divided: Baselitz and His Generation, which included work by other German artists such as Markus Lüpertz, Sigmar Polke and Gerhard Richter. Wir fahren aus draws together two familiar strands within the artist’s practice: portraiture and the process of repeating and reinterpreting images and themes over time, employing different techniques and mediums.

In this exhibition there are 16 new, monumental paintings spread across several galleries. Baselitz has reinterpreted his own early works, throughout his career. Bedroom (1975) is an early double-portrait of himself and his wife Elke that was itself inspired by Otto Dix’s The Artist’s Parents(1924) where his elderly parents sit side-by-side on an old sofa. Baselitz reinterprets the double portrait by using recent Polaroid photographs of himself and Elke sitting nude, in a similar position as Dix’s parents. In doing so, Baselitz explores the notions of time, of mortality and of self in a macabre style that calls to mind numerous works of Egon Schiele or George Grosz. Stylistically, their bodies are rendered as contorted figures in pink or white against dark backgrounds; paint is sprayed to create a hazy, slowly unfolding reality. In this, Baselitz creates an ephemeral, transcendent quality in his figures alluding to the unknowable nature of death.

These are themes powerfully addressed in the earlier, celebrated Avignon canvases exhibited at the 2015 Venice Biennale. There is also a sense of pagan rites being played out at the end of the artist’s life; Baselitz is 78 and working with great passion and obsessiveness. The contorted figures evoke charred victims of war or fire, ancient corpses from mythology or archaeology. In any case, they seem destined to become museum pieces, difficult as it is to imagine living with the works in a home. Yet there is also an embrace of mortality that belongs to ancient rites, and somehow the images possess a strange beauty. It is a richness that comes from courage, and in these 16 new large oil paintings, and tree-like sculptures, Baselitz combines the passionate embrace of love, sex and death. Death here is erotic, the prospect of separation in death confronted; Baselitz makes no promises or guarantees, and so the viewers are challenged deeply, to make of their own mortality what they will.

It is in the series of new drawings that focus on portraiture where the artist depicts Elke sitting on a chair, nude, facing the artist that Baselitz’s intentions and skill most clearly proliferate. She is drawn with rapidly executed ink lines and bold washes of colour, over and over, capturing the universal experience of mortality.

Just as Dix sought to pay homage to his predecessors in German art such as the image of doom and decay,Hans Burgkmair and his wife Anna (1529) painted by Lukas Furtenagel (1505-1546), historic references abound in Baselitz’s work, such as to the German Renaissance painter Hans Baldung Grien [1484-1545] who painted The Ages of Man and Death (1541-1544) represented by a youthful beauty, a haggard woman and a skeleton.

Baselitz is an overtly angry and rebellious painter, and his work has always seemed to throw back at his viewers the disgust and guilt that he perceived the world thrust on Germany after the war. His attitudes were formed as a child who witnessed the fires that burned in Dresden following the controversial bombing of the city in 1945. Yet there is also a theatrical absurdity that lifts his work into an international museum context as a vital response to European history, beyond the personal.

From the 1960s, when he created works that shocked, or that were banned on the grounds of obscenity, Baselitz’s response was nonetheless steeped in a firm knowledge of the artistic works and writings of key artists and theorists: Wassily Kandinsky, Kazimir Malevich, Friedrich Nietzsche, Samuel Beckett and the French writer and artist Antonin Artaud. Baselitz has been involved with the work of the mentally ill and outsider artists; he has significant collections of Renaissance woodcuts and African art. Recalling his works being seized, he says: “It was fun to do something that people would be upset about. But I also wanted to do something extraordinary and serious and I felt very privileged to have the artist’s power to contradict. You feel like you are the founder of a new religion, even if your congregation is only your wife and kids.”

The 2014 exhibition at the British Museum was important in the manner in which it placed Baselitz’s work in the broader context of postwar Germany. There his dedication to drawing, and printmaking in the German tradition is revealed and explains his immediate, often fierce attack on the paper, wood block or etching plate. The linocuts especially show the powerful immediacy of the drawn line, and his ability to work in two or three dimensions on a great scale as the new exhibition testifies, can be attributed to the organic energy he captures in drawing. Baselitz describes drawing as allowing an exceptionally, “fluid type of space … [where] you can break any kind of order or convention, quickly and precisely”.

The characteristic hulking figure that combines an oversized body and small head questions the role of artist and hero. In 1969, he began to paint his figures upside down. The distorted, fractured human forms from the 60s onwards are as shocking in their perception of humanity as those of his forebear in the northern tradition, Hieronymus Bosch. Where Baselitz departs from Bosch, and indeed most artists who have influenced him, is in an inflated sense of the absurd. 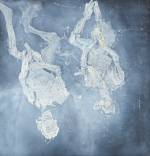 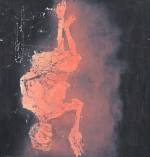 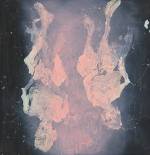