The octogenarian painter’s enormous, unpredictable canvases are by turns joyful and fearsome, introvert and extrovert, ordered and chaotic 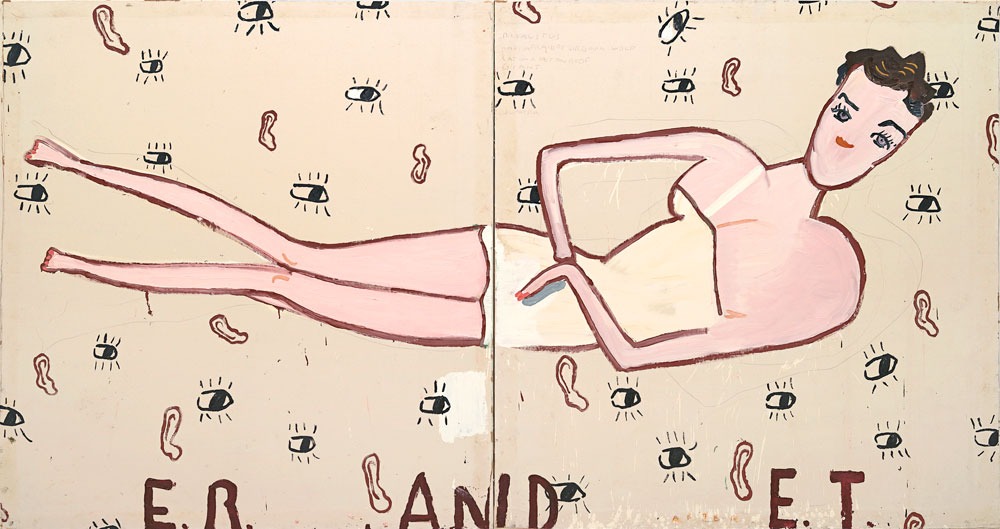 Who would begrudge the irresistible rise of Rose Wylie (b1934), currently in her ninth decade? As a tale of late-life success, it is almost the stuff of the Oscar-bait biopic. Abandoning her art in the mid-50s to raise a family with fellow artist Roy Oxlade, Wylie did not complete her MA at the Royal College of Arts until 1981, aged 47. She then laboured with relatively little notice for a couple more decades, occasionally exhibiting in London and southern England, before being “discovered” in the late 00s. Then, months before her 76th birthday, something changed. Germaine Greer dubbed her “Britain’s hottest new artist”. Once the barrel was rolling, it continued apace: since 2010, Wylie has had solo shows in galleries from New York to Moscow. She received a Paul Hamlyn Prize in 2011, the John Moores Painting Prize in 2014 and the Charles Wollaston Award for the “most distinguished work” at the 2015 Royal Academy Summer Show. A year earlier that same institution elected her a Royal Academician. Now, London’s Serpentine Sackler Gallery presents Quack Quack, the largest survey of her work to date. 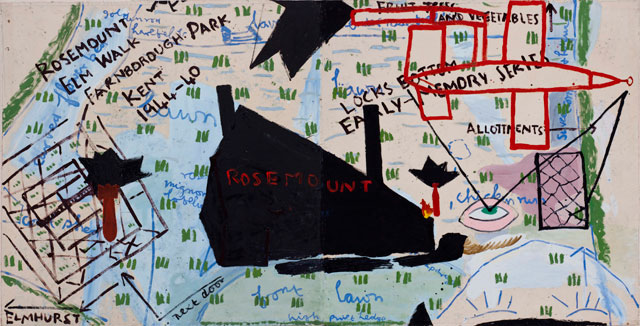 Only two paintings in the exhibition betray Wylie’s age. Rosemount (Coloured) (1999) and Park Dogs & Air Raid (2017), respectively among the earliest and most recent pieces in the show, recall her childhood experience of the Blitz. The first, set in rural Kent between “1944-40” [sic], has the flattered topography of a medieval map. Atop the rough texture of an unpainted canvas, there are patches of green and blue, tufts of grass and hedgerows. Uneven text marks out localities (“Elmhurst”, “Locks Bottom”), features (“Allottments” [sic], “Fruit trees and vegetables”) and the address of the eponymous house itself. Rosemount is a black hulk at the centre, pointed and chimneyed like a naval vessel. It looms out as if viewed head-on. To the left, a neighbouring home, presented as a set of nested boxes, is viewed from above. And to Rosemount’s right, Wylie places her own eye with a lash of hair, gazing towards a doodlebug as it hurtles towards the city – terror and exhilaration, a child’s reaction to the spectacle of war. 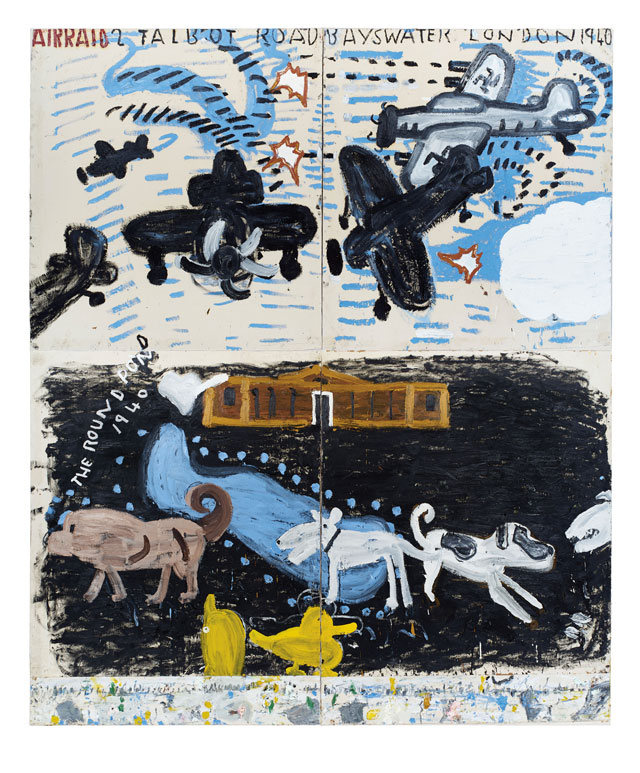 In Park Dogs & Air Raid, the theatre shifts to London. Wylie spent a short period in Bayswater before moving to Kent, although we see little of that area here. Instead, Wylie presents Kensington Gardens and the sky above. In the upper half, Spitfires and Messerschmitts are engaged in a vicious dogfight, lighting the sky with bursts of fire. Below, oversized dogs roam in a pitch-dark park, the grass painted like a tangled thicket. There are correspondences in the curvature of the dogs’ tails and the planes’ wooshing backdrafts, but they come from different worlds: global conflict and bourgeois domesticity. A pair of narrow panels at the very bottom bookend the composition with an abstract smattering of paint. At the centre sits the Serpentine Sackler itself, formerly a gunpowder store and thus a participant in the history of war. A white smudge indicates Zaha Hadid’s 2013 restaurant, unmooring the painting in time, and reinforcing it as a vision of individual memory rather than an attempt to reconstruct history. 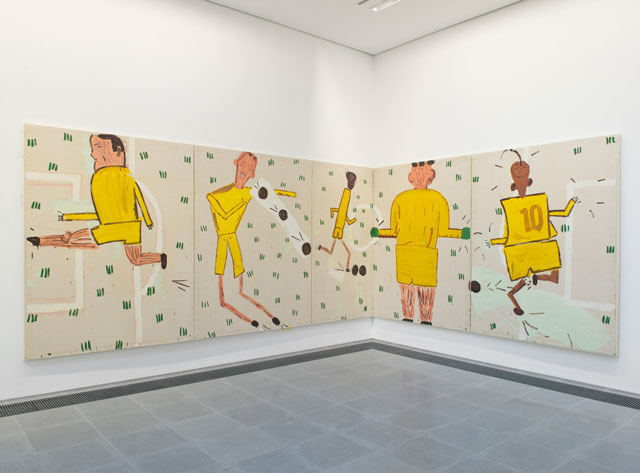 For all their unembarrassed corporality – the contorted bodies of footballers in Yellow Strip (2006), the scantily clothed body of Elizabeth Taylor in ER & ET (2011) – Wylie’s images emerge from the realm of her mind. Even her misspellings – “allottments”, “planaks” in Empty Bench (2017) – are redolent of a brain running ahead of itself. Wylie’s subjects, although often drawn from other visual mediums such as cinema and magazine photography, are painted from memory. As she said in 2014: “The final drawing is often the memory of having drawn it a lot of times before.” Wylie’s subjective approach allows her to frolic with associations. In ER & ET, the actor reclines on a background of eyes and ears, taken from the embodied cloak of Elizabeth I in Marcus Gheeraerts the Younger’s Rainbow Portrait (c1600). Squint at the lush vegetation and pink hillocks of Park Duck (2017), and you could be looking at Hieronymus Bosch’s Garden of Earthly Delights (c1515). 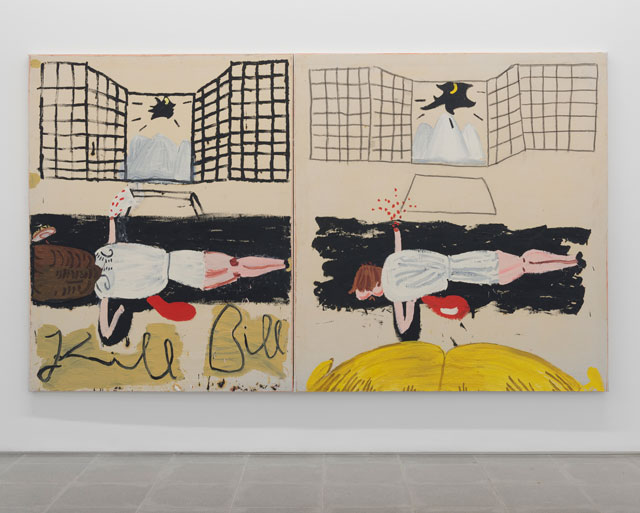 In 2013, the art critic Brian Sewell described one of Wylie’s paintings as “a daub worthy of a child of four”, and the word “childlike” is often used to describe her raw, messy style. But “childlike” implies an innocence, and Wylie’s mode is one of experience. There is a disappointment for every thrill, a banality for every wonder. Hers is an unweeded garden. In Jack Goes Swimming (2013), based on the romantic comedy Jack Goes Boating, the central figure’s back is chiselled with a scar, the sort to make a beholder wince, while Kill Bill (Film Notes) (2007) nonchalantly depicts a character’s bloody death. Arsenal and Spurs (2006) presents a bird’s-eye scene of a football match as oppositional combat, the players reduced to numbered shirts under the command of their team’s outsized symbols, one of which is a cannon. And Park Bench (Migrant) (2017), one of a series inspired by Kensington Gardens, inevitably calls to mind contemporary privations, although Wylie leaves the viewer to come to their own conclusions.

There is another tension in Wylie’s work, between intentionality and spontaneity. Her finished paintings are the result of a painstaking process of drawing and painting: in ER & ET, we can even see a pencil line mirroring the curve of Taylor’s shoulders, making Wylie’s process visible. Large-scale works such as the contiguous Green Twink and Ivy (2003) and Red Twink and Ivy (2002), half of a 17-metre whole, have a deceptively complex mise-en-scène based around numerous versions of the same figure. And yet her pieces abound with seemingly spurious addendums that appear more a product of instinct than intent. ER & ET features a list of Taylor’s most acclaimed screen roles, faintly scrawled above the actor’s arm. In NK (Syracuse Line-up) (2014), which places five portraits of Nicole Kidman in a row, apparently random smears of yellow and pink paint leap off the canvas like malevolent fingers. And she is happy to incorporate chance: “Accidents happen all the time with oil paintings,” she said in a BBC Radio 4 interview. “You drop stuff, the brush falls, a line comes out because you’ve scratched it off.”

In this willingness to be unpredictable, Wylie follows in the footsteps of her favourite painter, Philip Guston, whose extraordinary late works also demonstrated the aesthetics of the cartoon. She could also be placed alongside Georg Baselitz and the Neue Wilde, German painters of bracing intensity and expressionist subjectivity, although her work lacks their volatile political edge. But I would propose a less immediate parallel. Both in her insistence on the primacy of her work as seen – she told the Guardian recently: “The message is the painting. The painting is the painting” – and in her pulling attention to the physicality of her canvases, Wylie bears comparison to Jasper Johns (the subject of a major Royal Academy retrospective this year). But while Johns, in his Seasons paintings of the 80s, meticulously crafted images from his life into firmly ordered compositions, Wylie’s work thrives on memory’s entropy, on the way we organise the floating odds and ends of our minds. Human, all too human, in the best possible way. 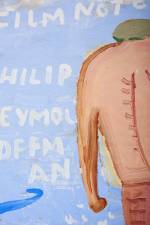