Inverleith House in the grounds of the Botanical Gardens in Edinburgh is showing the late works of Philip Guston. Just nine works are given the luxury of space, bathed in natural light, making it an unusually reflective experience.

In fact the experience prompts one to return to the essential characteristics of 20th-century aesthetic change, addressed by Dore Ashton in her review, “Philip Guston: The painter as metaphysician”, for Studio International, in 1965: “that painting is an interpretation of experience on all levels, psychological and spiritual as well - has opened the way for another language in painting, the language of metaphysics. Philip Guston’s paintings – his most recent paintings particularly – indicate that for him, painting is a mode of inquiry and a mode of stating an intuition concerning the meaning of existence. Guston’s paintings are more then a collection of visible facts. They are intentionally endowed with meaning, for as the Zen master says, as soon as the questioner poses the question, he already has an intuition of the answer”.

Philip Guston created monumental, but simple works, employing a limited palette, of pink, red and grey; from certain angles in Inverleith House, light touches the canvases causing the soft pink to reflect and illuminate the internal experiences of age, of vulnerability precipitated by illness, loneliness, what Guston referred to as “the doom of modern man”. A quintessentially ponderous mood pervades, where unlikely images touch a universal experience. The works are at once authoritative and powerful, yet they employ an apparently crude caricature of mundane objects. This is the first exhibition of Guston’s paintings in Edinburgh, and while the exhibition is small in scale it is instructive in the working methods of one of America’s most important artists of the 20th century.

It is difficult to observe Guston’s late works in isolation from his entire oeuvre. The Royal Academy in London, presented a comprehensive survey of his work in 2004: “The Art of Philip Guston: 1913-1980”. Philip Guston was born Philip Goldstein in Montreal, the youngest child of Russian émigrés who arrived in Canada shortly before his birth in 1913. However, Canada, and later America, failed to fulfil the Goldsteins' dreams of a better life. In Montreal they lived in what friend Morton Feldman described as 'one of the better Jewish ghettoes in North America, but a ghetto nonetheless'.1 In 1920, the family moved to Los Angeles but their fortunes did not improve. Guston's father, Louis, worked as a refuse collector and suffered severe depression. This led to his eventual suicide by hanging and it was Philip, aged only ten, who found the body. Philip’s mother, Rachel, was left to care for and support the seven children. Guston survived the trauma of his father's suicide by isolating himself from his immediate family, and by drawing.

Cartoons were particularly important for Guston, and indeed all children of his generation. There was a political dimension, too, and political satire and activity both became important aspects of his life and work, leading in fact, to his expulsion from school. In spite of limited formal education, he approached the history of art with great rigour, and after a brief spell at art school, which he found opressive, he became a largely self-taught artist. His early works possess a monumentality and intellectual strength that take one by surprise. Guston’s acquaintance with the work of Picasso and de Chirico, and his interest in politics gave him an intensely focused ambition. He worked as a mural artist, under the influence of David Alfaro Siqueiros, Diego Rivera and José Clemente Orozco. In 1934 he travelled to Mexico and worked as an assistant to Siqueiros. The social agenda shared by these artists was central to Guston's work in the 1930s.

It was in the early 1930s that Guston had his first encounter with the Ku Klux Klan when some of his paintings were slashed while on display. Guston's image of the hooded figures of the KKK stayed with him and informed many of his later artworks. In 1935, Guston moved to New York to take part in the Federal Arts Project (FAP), part of Roosevelt's “New Deal Program”. There, he was one of the artists funded to paint murals. In New York during this period he met Willem de Kooning, Arshile Gorky, Kline, Rothko and Newman. They formed the nucleus of what became the Abstract Expressionist movement. The late 1930s also saw an important shift in Guston's work from mural painting – an essentially co-operative and public enterprise – to private studio work. The Max Beckmann collection was housed in St Louis and introduced Guston to the intense psychological achievements of the modern German master. Beckmann's scepticism of society, his violent moods and the distorted figures were an important source for Guston. Guston, in turn, enlarged the heads and hands of his figures and created an insidious claustrophobic mood.

Philip Guston made abstract paintings for approximately 16 years, a third of his career. He did not subscribe to Clement Greenberg's rigorous formalism, where metaphysical and spiritual themes were eliminated. Guston viewed painting as, “an illusion, a piece of magic, so what you see is not what you see … I don't know what a painting is; who knows what sets off even the desire to paint? It might be things, thoughts, a memory, sensations, which have nothing to do directly with painting itself. They can come from anything and anywhere”.2 During the 1960s, Guston's doubt was directed towards the art world itself. He rebelled against the prevalent belief of the absolute purity of non-objective form. “I got sick and tired of all that purity … I wanted to tell stories!”

Drawing underpins all of Guston's work and enables him to construct an elegant composition. His knowledge of art history also informs his work so that a sophisticated and powerful dialogue between stylistic formal considerations, political ideas and autobiographical detail is presented in his remarkable pictures. Indeed, from 1965 to 1967, Guston only drew, and quite suddenly he began to paint again. The works at Inverleith House come from this late period and they all seem to have flowed most naturally.

An illustrated catalogue featuring an interview with the art historian Dr David Anfam, by curator Paul Nesbitt, addresses Guston’s relevance to artists today. Anfam suggests that “he challenged the orthodoxy of Modernism itself, the idea that painting could only move in one direction – which was propagated by people like Clement Greenberg. Guston completely turned that doctrine on its head. When the whole world thought that the future was abstract and anodyne, Guston proved it was back to brute things – ‘things’ and the figure – and I think that blow against conformity makes Guston perennially topical, because it means artists are not bound (excuse the pun) to live in a self-imposed straightjacket. It’s about freedom: that’s never out of date when it comes to creativity and art”.

Ansam observes that Guston experienced the artistic equivalent to “writer’s block”, referring often to “erasure” with all the negative connotations that it implies. After drawing for two years exclusively he appears to have reinvented his practice, with a strong lexicon of images, what he called his “new alphabet”. Returning to recognisable objects, to figuration, Ansam says: “it is as if some sort of psychological floodgates have been opened. The sheer fecundity of the late work, the way it does pour out of him, is evidence to me of a reservoir of images in his head, psyche, and in a way in his heart – that he simply couldn’t hold back. It’s almost as if he were like a ventriloquist and a voice was speaking through him, except that it spoke through his paintbrush.”

It was at the Marlborough Gallery in New York in 1970, when Guston was 57 years old, that he effectively reinvented himself as a figurative artist. His new paintings prompted rage and disbelief. Hilton Kramer was vitriolic, declaring a primitive force triumphing over civilization. Guston was accused of betraying the modernist cause. Yet a number of Guston’s most significant early works show how he absorbed the figurative tradition, whilst at the same time infusing the images with an originality, coloured inevitably, by his tragic childhood. Mother and Child (1930) shows the female as courageous, as his own mother had been in raising seven children, after her husband’s suicide.  Following the Marlborough exhibition opening Guston chose to recover from the criticism and scandal by travelling to Italy. Here, by paying homage to the Old Masters, he was able to find a new beginning for his late work.

“Virtually all the abstract expressionists were rooted in figuration. Another aspect that has been forgotten is that Modernism’s influences – Cubism, Surrealism, abstraction, etc – did not come at the outset of the various artists’ careers. Instead, they were schooled in the typical precepts that you got in any art schools of the time: the Old Masters. Pollock looks at El Greco, Tintoretto, Rubens; Clyfford Still says the figure lies behind it all. Rothko famously remarked that ‘None of us could paint the figure anymore without mutilating it’. His implication was that the human presence lay at the crux of his art and he famously conceived his later imageless icons in figurative terms. The only one who bucks this trend is Newman. Basically, Newman did very little early work and destroyed what he did. All of the others essentially used the figure as the anchor for their whole imaginative development”.

In the late work, where he makes mocking gestures at the art world, authority and religion multifarious references are made. The sublime, sought by Abstract Expressionists such as Barnett Newman and Mark Rothko, was replaced by humour, politics and cartoons. Trauma is assuaged by repetition and irony. Here the artist acts as a puppeteer, controlling a cast of figures that are both essentially human, but also magical. They are also autobiographical. Drawing from early childhood experiences was already well-established in his oeuvre, but he gives it a new forcefulness in works such as ‘The artist as antihero and nicotine addict’: The Studio (1969). The work can be compared to Vermeer’s The Art of Painting/The Allegory of Painting/ Painter in his Studio (c1666), and other artistic influences such as De Chirico, the existentialism of Fellini and perhaps the nightmarish tone of Ingmar Bergman.

Laura Cumming’s description sums up Guston’s perspicacity and importance in this seminal work:

“The bulb, the Klannish hood, the ciggy with its orange tip: Guston evolved a pungent vocabulary of forms that couldn't stand for anything except themselves and yet always meant so much more. Those hoods, hugger-mugger in some kind of office, what are they up to with their arms raised against each other? That curious citadel, pink, fat and squat, ascending like Brueghel's towering Babel, seems both ancient and yet so modern you might turn a corner and find it before you today, a sinister bureaucracy rising up to blood and milk clouds. Guston's late paintings have become archetypes, irreducibly simple, translating the world. Like good cartoons, and great paintings, they reveal what cannot easily be said.”

Combining profound mental anguish with the juxtaposition of crude and silly forms (gigantic shoes, decapitated, bald head, cigarettes) Guston achieves a fine counterpoint between knowing and innocence; between rage, injured flesh, and the comic. Although the Philip Guston exhibition at Inverleith House shows only nine works, they are profound images that belie their simple forms, attaining a rare level of human insight and poetry in visual form. 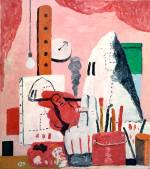