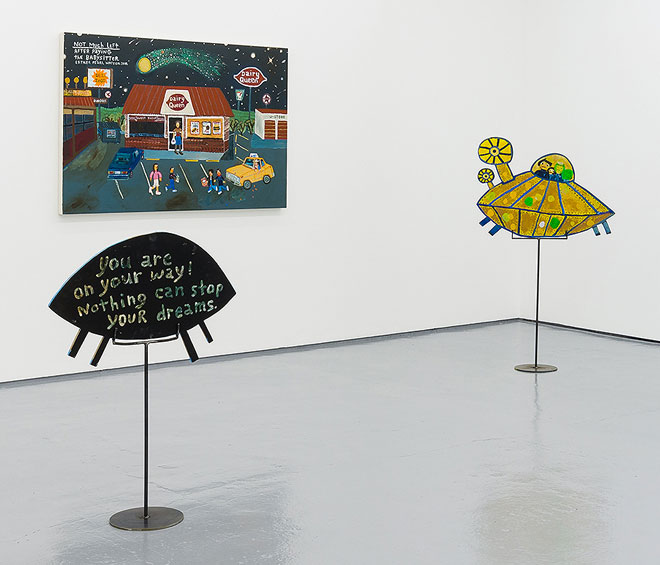 The origins of Mothership, Esther Pearl Watson’s solo exhibition at Maureen Paley, London (until 22 September), is a letter written by the artist’s mother to Watson’s grandmother in the late 1980s. Snippets of the text, which point to the struggles of a woman bound to domesticity, are inscribed in the corners of the paintings on display. These straightforward declarations – “Gene took the paycheck and didn’t come home last night” – frame the Texan-born artist’s portrayals of her wayward childhood: cattle and cornfields reside under flying saucers floating in a star-filled sky; a church outing led by her father appears next to car rides to fast-food restaurants.

The regular appearances of the spaceships are a reference to Watson’s father, who spent his life unsuccessfully building UFOs to sell to Nasa. Although the words of a matriarch act as a unifying device for the series, it is the presence of the artist’s father, with his earnest and persistent aspirations, which prevails. His endless pursuit of the American dream is highlighted by the exhibition’s three-dimensional works – cutouts of the ubiquitous flying saucers that bear comments taken from a high school yearbook. “You are on your way! Nothing can stop your dreams,” reads one. 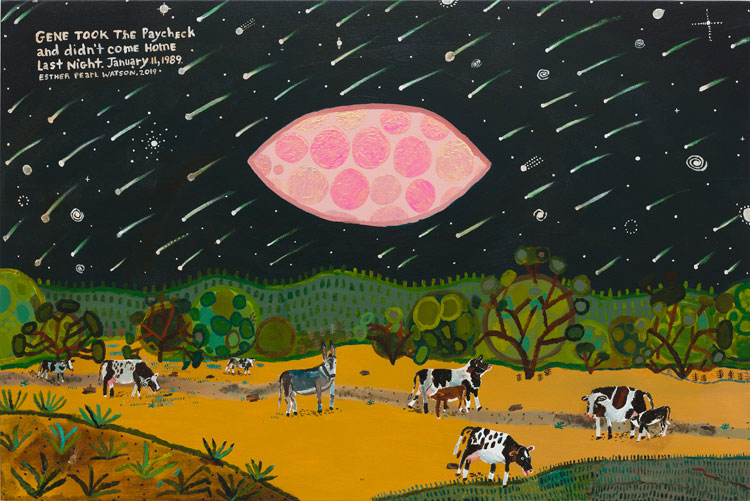 Watson’s scenes are painted from memory and the reliance on fantasy is not new within her practice. The artist (b1973) is perhaps best known for her 2009 graphic novel Unlovable, which was based on a teenager’s diary that she found in the toilets at a petrol station. Her extensive work as an illustrator makes sense in the context of her narrative-led paintings, which convey a message of duality: a sense of dysfunction is always accompanied by a feeling of levity.

Allie Biswas: Tell me about your father.

Esther Pearl Watson: A lot of the paintings I make are memories of my dad building the future transportation, which were going to be these flying saucers. It was a hobby. Most of the time he would work in factories, but he would quit those jobs and work at Domino’s Pizza so he could build flying saucers during the day. He would alternate between building these spaceships and trying to be a good family man, and then he went through this very religious phase where he would take us to church. Sometimes he would wear religious outfits when we went to church.

AB: Clothing seems to be an important part of his identity. He also appears dressed as a cowboy.

EPW: My father was adopted when he was seven years old. He was born in Italy. It was a big change, leaving war-torn southern Italy and then coming to the United States. His adoptive parents would dress him up like a cowboy, and he grew up during the space age, and I think all of those things filtered into who he is. 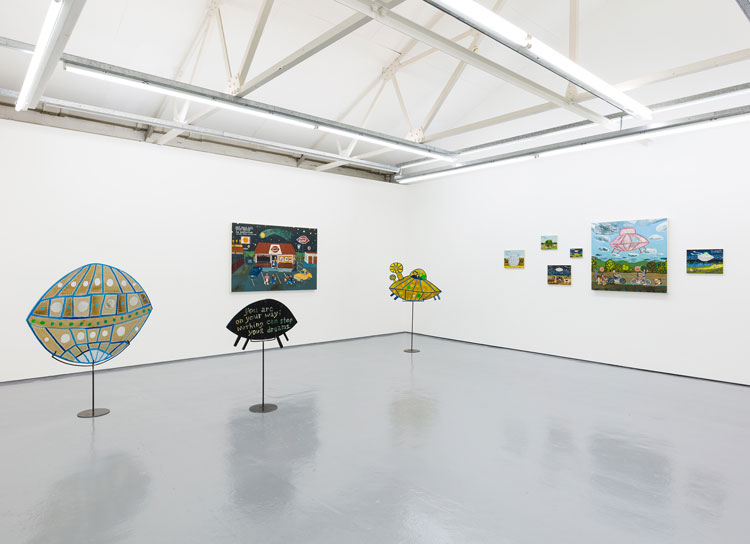 AB: The paintings are about rural life in Texas; more generally, American culture is at the centre of your work.

EPW: I talk a lot about this American idea of the dream. If you can just pull yourself up by your bootstraps, and you dream big, you could be rich and famous. My dad thought that if he could sell his designs to Nasa, all his problems would be solved. And my mother believed in it, too. She would sew him space suits. I love how nutty it can be.

AB: And there is a complete lack of scepticism, which is also nutty.

EPW: In the show, I quote from my husband’s high school yearbook – “You are on your way! Nothing can stop your dreams”. I feel as though that is the message I grew up with and that my parents believed in. Yet what I am painting is a very dysfunctional childhood in the 1980s. There isn’t a social support system in place and mental illness is very stigmatised in the United States – no one discusses it. “You need to shape up and get yourself a really good job.”  So, there’s my dad dressed up as an angel trying to go to these factory jobs. And everyone would say: “Well, OK, as long as you’re doing a good job.”

AB: The show in many ways is a testament to women and the maternal roles they take on. There are two contrasting narratives: one that traces the function of imagination (your father’s ambitions) and one that reflects on reality (summarised by your mother’s letter to your grandmother). The show is called Mothership and its starting point was a letter from your mother to your grandmother that spoke of the self-sacrifice associated with being a wife and mother. Are you siding with the female perspectives being discussed here?

EPW: Yes. I was thinking a lot about women’s bodies, because right now – all the works were made in the last year – a lot of women’s reproductive rights are being threatened. My daughter is now transitioning into adulthood and it had me thinking about the women in my family. She gets angry when strangers online try to tell her what to do with her body. I worry about her future. Will she have to work multiple jobs just to pay rent? If she chooses to raise children, will a large portion of her income go to a babysitter? Does this cycle repeat? The pink glittery saucers in the show are based on my daughter, who wore a pink glittery tutu at the time I started painting these “memory paintings”. (She quickly outgrew pink into olive green.) But she grew up associating flying saucers with her mother. That’s why they are motherships. 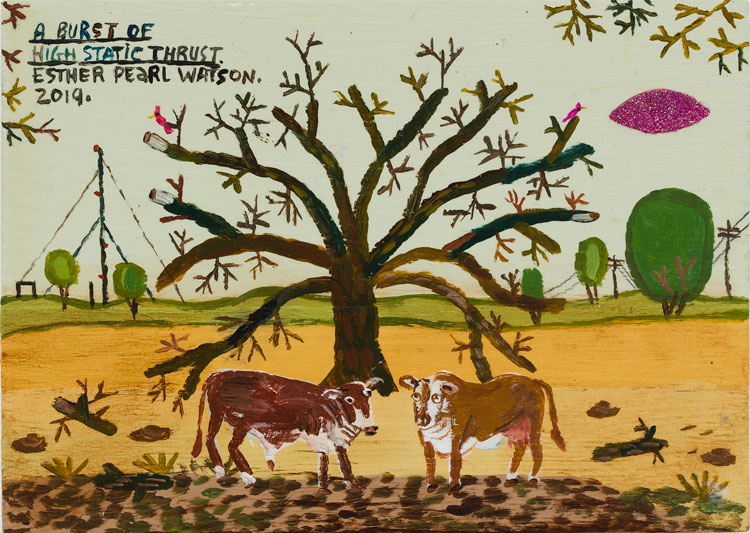 AB: The act of remembering is fundamental to your working process. When did you start making your “memory paintings”?

EPW: I started painting them around 2004, the same year that I was working on my Unlovable comics. I like how memory can’t be trusted. We can share an experience and remember different aspects of it. I like how my husband remembers the name of the realtor who helped us find our first apartment in New York City, while I don’t remember him at all. We were both there and I only remember that the front door hit the side of the stove and couldn’t open completely. I became interested in divergent memories when my dad would send me letters describing how each large saucer he built was dismantled. I had a completely different memory. It’s also nice how memories morph over time. I’ve painted the same moment several times and they look different.

AB: How would you say that your comics connect to your paintings? What is the relationship there?

EPW: From my years in illustration, I knew there were all these codes you had to follow to get someone to read the concept of the illustration. I like messing around with semiotics. When someone walked into the gallery to look at my work, they tried to gather the story. There are some ways in which I can point to the narrative, and other ways where I let the viewer co-author. I like the similarity of panels on a wall to the panels of a comic. I have always liked the black-and-white photo of Philip Guston’s studio in which small panels hang together on a wall. For me, that is a comic. 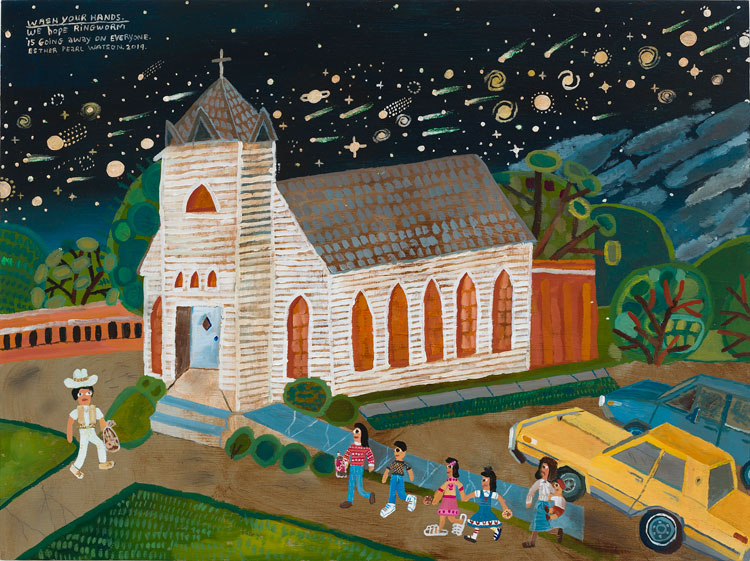 AB: How did you get into comics?

EPW: I was an illustrator in the mid-90s. When my husband and I moved back to Los Angeles, we got into the world of zines and mini-comics. It was the opposite of publishing for major publishers, in that we could be more experimental. There are no editors or art directors in self-publishing – unless you want there to be. Tabling with other alternative comic artists, I found that I liked deconstructing the lexicon of comics. The comics vocabulary is not very old – it formed about the same time as film. It seemed to be built off artists imitating the legends of comics, which were mostly men. I found that I was trying to find a voice of my own, so I broke a lot of comic rules, like inconsistency with characters, leaving in misspellings and mistakes, avoiding panels, using backwards speech balloons and so on.

AB: There is an underlying current in your work that is uncomfortable – your narratives are ultimately about failure or dysfunction – and yet you use a vernacular style that at first sight feels playful, even joyful. Was this a conscious decision?

EPW: I really search out moments of awkward humour. It is in my comic as well. That’s just been my whole life – painfully awkward moments that I naively navigate through. When I was still living at home, I came across Raw Vision magazine; this is how I was first introduced to folk art. There was a similar vision and passion that the artists shared with my father’s saucer-building. Then, in college, I found Douglas Curran’s book In Advance of the Landing: Folk Concepts of Outer Space. I realised there were others out there building saucers, like my dad. Folk art felt like the language I was raised in.

A lot of memory painting seems to idealise the days of the farm, which must have been difficult. I really like how it shows the distortion. Even in retablos or ex votos, no matter how bad it gets, there’s the floating saint of hope. So, I will intentionally make something that looks … People say the paintings look child-like or cute. I even have people say: “I have this painting in my kid’s room.” I’m like, well, that’s interesting, because … they are kind of painful to work on. For many years, while I worked on these memory paintings, I actually worked on my own Unlovable comics so I could laugh out loud. It was almost like a release.

AB: Finally, how would you compare the US that you are depicting in Mothership – from more than 30 years ago – to the present-day US?

EPW: I think there are a lot of similarities. The cycle of poverty and stigma of mental illness just repeats with the next generation. We still hold on to our visions of hope for the future.

• Esther Pearl Watson: Mothership is on view at Maureen Paley, London, until 22 September 2019. 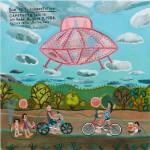