Maureen Gallace: ‘I wasn’t straining to do anything clever with such an odd or seemingly unfashionable way of painting’

Maureen Gallace: ‘I wasn’t straining to do anything clever with such an odd or seemingly unfashionable way of painting’

For her third solo exhibition at Maureen Paley, London, the New York-based painter shows a group of new works that continue to mystify with their enigmatic portrayals of secluded houses and nature scenes 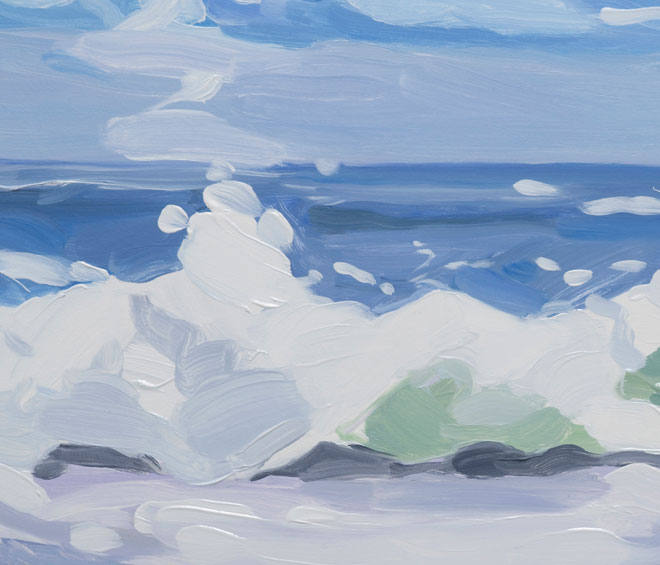 Maureen Gallace (b1960) is renowned for her exquisitely painterly works, which she first started making in the early 1990s. Drawing on various terrains, including those familiar to her from her childhood in rural New England, Gallace creates small-scale landscapes that are compelling in their ability to provoke a sense of immediate familiarity while remaining anonymous and distant. Other than distilling and reimagining scenes from reality, the artist’s skill lies in her crisp, light-flooded compositions, from which her lush brushstrokes appear to leap.

Allie Biswas: I would like to start with location. Your paintings since the early 1990s, when you first started showing your work, have been focused on a specific type of rural environment, that includes the ocean, the coast, flora, trees, and so on. How did this scenery become the subject of your painting, and are there particular places that you are referring to?

Maureen Gallace: The environment is not always rural or remote, depending on how you define those terms, though I don’t mind that description. Many spaces are in between or on the edge of smaller towns along the north-east coast of America. There is a lot of Connecticut and Massachusetts there  – places I know about from my childhood. Some of those places I have been returning to for decades. Others are newly discovered. My first landscape paintings were actually pretty synthetic and less specific. They were simply ways to figure out painting and respond to a certain kind of imagery. They became more specific later on. And it is true, I don’t often paint scenes from New York City, where I live, but I never rule it out either.

AB: When you first started showing your work, were you conscious that you were perhaps the only painter at that time in New York who was making such intimate, small-scaled, representational works? Were your landscapes, in this context, considered an anomaly?

MG: I think I was an anomaly in that I wasn’t straining to do anything clever with such an odd or seemingly unfashionable way of painting. In many ways, it was the antithesis of everything swirling around me, especially in hindsight. Since I was as informed as any young artist at the time about contemporary art – having gone to proper art schools – before moving to NYC in the late 80s, and then quickly establishing a place in the community once there – the combination of being in the know, but being OK with having a practice a little out of step, turned out to be a good thing.

AB: You have said that you have to feel calm when you look at your paintings. One of your most powerful structural devices is isolation – felt strongly by the absence of people. Does serenity for you relate to the power and presence of nature that is devoid of humans?

MG: I must absolutely have a connection to these locations and scenes, many coming from places that I grew up around. But I don’t fetishise nature or the landscape. Rather, I analyse these things as physical structures that I know and have studied. I do, though, fetishise painting – good painting. The sense of place and transport, the feeling or sense of figurative isolation, and contemporary and historical dialogue are all things that I’m happy to have accompany the work. But those things are never where I start. As far as me feeling calm, that is less about feeling serene and more of a structural thing: like how a building needs to be structurally calm for it to behave properly and not implode. The paintings are always one stray mark away from imploding, and that is the struggle.

AB: What about mystery? What role would you say that this plays in your work? Your use of architecture, particularly, encourages an atmosphere of ambiguity – houses that lack windows and doors; buildings that appear only as groups of one or two.

MG: I don’t mind mystery. In life, I think one looks at an interesting (old) house or stares out at the ocean, and senses a human history that can never be fully accessible. But from a critical standpoint, I have rejected an imposed narrative in the work. I think a certain amount of projection is inevitable. This is where a sense of figuration and our shared experience as people having passed through places that might resemble or feel like my paintings – whether real or imagined, fact or fiction – comes into play. But, for my part, although I do have a narrative like anyone else, I focus only on my ability to make the paintings work as paintings.

AB: Can you describe your process prior to starting a painting? Will you always visit the site that you depict, and is there a preliminary stage of sketching or photographing the scene?

MG: The process varies, but I’ll just say that I do revisit many places and study them through time. In artspeak, this might be described as a “time-based” practice, and so on. I’m fine with that, too, but I just don’t think of it that way while working, in the same way that a baseball player probably doesn’t think of their process as “time-based” when they revisit the same stadiums year after year. In other words, it is very much about performing in the moment. It is also about compulsion, some sense of duty, and sometimes excitement in revisiting locations to see what is new, along with what is familiar. I do photograph, and I do sketch and make studies.

AB: How does this compare to starting the painting in full? Do your methods stay the same, or are you approaching the canvas in a new way?

MG: Methods do change in consistently small ways. I can see how that adds up by simply looking back at the paintings’ consistent evolution. Physical conditions are always very influential on my process: the studio, the surface, the priming, the brushes. Once I start the painting, there is a very small window of time to complete it, which is just a matter of controlling the surface and dry-time. If it doesn’t work, it gets wiped out and I start over. And even wiping out is not always so simple. This process can take several weeks or could be instantaneous. It’s a bit of a high-wire act.

When it comes to doing shows, with several pieces working in dialogue, if done correctly, then even I won’t be able to tell the difference between paintings that came together with some ease versus paintings that were more of a struggle. But I like to think that the work presents a contradiction to the viewer. On the one hand, its first act is all about the ease and seeming simplicity that effortlessly emits from the painting’s surface by way of harmony and so on, and the second act reveals a bit more of the physical and mental tension involved with getting there. And I mean this regardless of how many attempts it took for any given painting. It is more about each individual work embodying a sustained effort, in total – refining and articulating painting as a language in and of itself.

AB: There is a sparseness and stillness to your work. Would you say that, for you, abstraction relates to reaching the essence of place?

MG: I don’t necessarily see sparseness and abstraction as direct equivalents. But I know what you mean, and I guess that evokes a way of dealing with representation after, let’s say, impressionism. And despite so many ebbs and flows of that dance between representation and abstraction over the past century and a half, I look at where we are now and think there is still an incredibly compelling intersection between the two things. And painting in particular is able to take this on in a direct and visceral way. So, yes, I think that applies to my work as well.

AB: Many see your work as sitting within the same vein as American landscape painters such as Fairfield Porter and Edward Hopper. I’d be interested to hear your views on this.

MG: I welcome those comparisons since I am clearly working within a certain tradition. Painting is always in dialogue with its own history one way or another. And I do love the painters who have direct influence on my work and who I’ve been fortunate enough to be in conversation with, American or otherwise; representational or abstract. Fairfield Porter and Hopper, as you mentioned, along with Jane Freilicher, Albert York and Giorgio Morandi. And then Agnes Martin and Robert Ryman. In more contemporary terms, other artists I think about and have a connection with are Billy Sullivan, Jason Tomme, Karen Kilimnik, Anne Chu, Vincent Fecteau and Brian Calvin.

AB: Lastly, tell me about the works you chose to show for your current exhibition at Maureen Paley in London.

MG: Every show is a continuation of what came before. And the selection process is always about feel, and honing the intimacy found between the works. I am always trying new things with respect to images and execution, and, as I mentioned earlier, I am always trying to refine, which could mean both making things tighter or looser. So that is the simplest way to describe this current show with Maureen Paley –paintings in search of refinement.

• Maureen Gallace is on view at Maureen Paley until 20 November 2016. 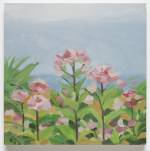 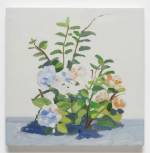