In the Lithuanian artist’s latest exhibition, contrasting public reaction to the dismantling of communist public sculptures in his homeland are examined in two video works 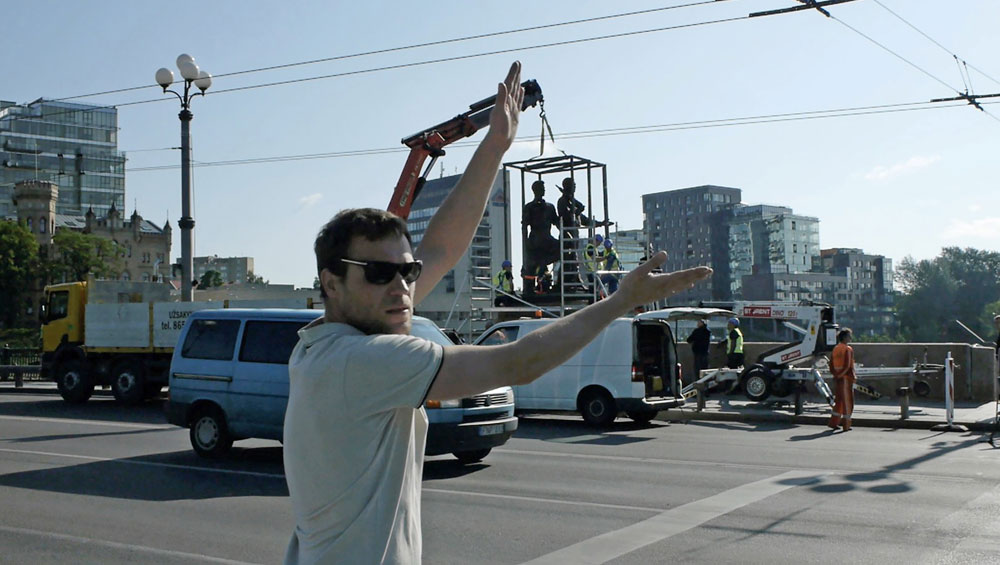 With the Revolution: Russian Art 1917-1932 exhibition at the Royal Academy also opening last month, socialist realism is being much talked about. Although the Royal Academy exhibition focuses on Russia, the largest republic in the USSR, the Soviet Union, which existed from 1922-91, included 14 other Soviet socialist republics in its final years. Deimantas Narkevičius (b1964) has spent a large part of his career as an artist exploring the effect of the old union on one of them – his native homeland, Lithuania.

In an interview in 2014 for Tate’s online video series, TateShots, Narkevičius said: “Going from one political formation to another is a big, radical change.” Inevitable questions arise for the art communities in these regions, such as: “Do we directly address our history and incorporate it into the fabric of our future?” Or: “Do we completely negate the past and carve out something totally new?” In the case of Narkevičius, you would have to say that the artist falls somewhere in between.

For his new exhibition, 20 July 2015, Narkevičius has juxtaposed two video works that discuss the same topic – the dismantling of old communist statues – but are distinctly separated by the time in which the events took place and by the public’s reaction.

The first video work, from which the show takes its title, is 20 July 2015 (2016), and is located in the ground floor gallery. The 3D film was initially conceived as part of Doubled Youth, Narkevičius’s recent solo exhibition at the Baltic Centre for Contemporary Art in Gateshead. It is a short film that documents the removal of eight socialist realist sculptures from the Green Bridge located in the heart of Lithuania’s capital, Vilnius. Despite the fact that Lithuania gained independence in 1991, these well-known public works, initially installed in 1952, had remained until the summer of 2015. The film takes the viewer through the entire day on which these sculptures were taken down, providing us with a sober view of the ghostly atmosphere surrounding the area at the time.

Although the use of 3D technology gives the viewer an immersive experience, Narkevičius takes care not to let us forget that we are, in fact, watching a film. An anonymous member of the production crew can be seen clapping from scene to scene in a manner suggesting that the scene footage is about to begin. These parts, which are purely there as reference for editing teams, would normally be cut. But Narkevičius has included them in the finished edit, resulting in a distance between the work and the viewer. Someone even wipes the camera screen in a circular fashion, leaving viewers feeling as though he is wiping our 3D goggles. Perhaps this gesture signals a wiping away of the past, clearing our vision for the present.

The film has a slow yet calm pace, building towards a crescendo when the statues are finally taken down at 2am. During the removal of these sculptures, the film captures a local news reporter commenting on the scenes, with some degree of surrealism, addressing the news camera with: “Is it normal?” In an interview for Baltic about 20 July 2015, Narkevičius noted: “When there are no marks of former occupation, then people don’t think about it at all.” He then goes on to talk about how he thought these discussions were over in the 90s, in the aftermath of independence, and that the socialist realist sculptures were “beautiful objects”, but “political monsters”.

The other film in the exhibition, Once in the XX Century, is from 2004, and has been acquired by MoMA. It consists of pre-existing footage taken from the Lithuanian National TV archive and traces the taking down of a public sculpture of Lenin in 1991. Narkevičius edited this VHS tape to reverse the playback of the material, with the result that the footage appears to show large crowds applauding the erection of the Lenin sculpture, rather than its removal. It’s a simplistic gesture by the Lithuanian artist, and yet poses complex questions surrounding shifts in political regimes.

The events shown in the two films are separated by nearly a quarter of a century and provide a clear analysis of how time alone can change public perception of the same ideas. Regardless of the fact that Narkevičius reversed the footage in Once in the XX Century, the new-found optimism that the people of Lithuania felt in 1991 at gaining independence is clear. However, 20 July 2015 documents a different feeling. This story is one of an anti-climactic nature, in which the people look completely disinterested in their surroundings and the events that are taking place. Is Narkevičius trying to highlight the confusing message that the government is sending out by the removal of statues so long after the political change took place? Or is he attempting to suggest a deeper societal issue in a country that, like so many that have experienced dramatic political change, have conflicting ideas about how best to pursue the future?