It seems incredible that the battle to win people's hearts and minds during the cold war that divided Europe and much of the rest of the world during the years following the Second World War could be symbolised by an American kitchen (one of four American kitchens) that was shown in Moscow in 1959. Part of the American National Exhibition, which was designed to portray the USA as a place of liberty and the pursuit of happiness (and people's capitalism), this particular kitchen was where Vice-president Richard Nixon and First Secretary of the USSR Nikita Krushchev met face-to-face for their notorious 'kitchen debate' in which they thrashed out the competing claims of communism and capitalism in providing the best quality of life for the greatest number of people. But it was also when, for perhaps ten years, Russia made an effort to match America in the field of domestic products and architecture during the thaw (as it was called) that followed Krushchev's denunciation of Stalin's policies in 1956.

In the Victoria & Albert Museum's exhibition 'Cold War Modern: Design 1945-1970' photographs of this historic meeting, the American exhibition and images of Russian product and architectural designs that reflected attention to the needs of ordinary people during the thaw come in the third section. 'Cold War Modern' begins with 'Anxiety & Hope in the Aftermath of War' and 'The Conscription of the Arts'. And here it is clear that, with the Iron Curtain going up across Eastern Europe (Churchill's phrase), the development of nuclear bombs in Russia as well as in America, and the unexpected lead by the Russians in the race to conquer space (Sputnik was launched in 1957), both the Russians and the Americans set out to create post-war utopias and regarded modern ways of living as a sign of progress.

Indeed, for the Americans, massive aid for the reconstruction of Europe was not only an attempt to avoid the mistakes following the First World War but also a way of establishing the free market in the West which welcomed such American products as Charles and Ray Eames' armchairs, using revolutionary glass reinforced plastic technology developed during the war, and Eero Saarinen's upholstered 'womb chair' whose shape hinted at the need for protection against the nuclear bomb. Indeed, 'Cold War Modern' points out that a belief in post-war dreamworlds and the possibility of nuclear catastrophe existed side-by-side, the latter leading to Buckminster Fuller's proposal for a dome over Manhattan which would not only create a climate-controlled city but would also provide shelter from radioactive fallout.

The response of artists following the end of the Second World War ranged from monuments to the Unknown Political Prisoner by Naum Gabo and Reg Butler that were never built to Picasso's 'Massacre in Korea' of 1951 and Andre Fougeron's 'Atlantic Civilisation' of 1953, which records the global nature of politics and how domestic expenditure on housing and pensions is having to compete with that on armaments (France had just entered the Korean War). Later, at the Venice Biennale of 1964, Rauschenberg's Kite depicted the American hegemony, its military and cultural imperialism.

But, despite the political, economic and social turbulence caused by the war in Korea of 1950-53, the Berlin Airlift of 1948-49, the building of the Berlin Wall in 1961 and the beginning of the war in Vietnam in the early 1960s, the utopian vision of the modern international style established during the interwar years was soon re-established. In Marseilles, Le Corbusier's Unite d'Habitation was begun in 1947; in Berlin, Gropius' Architects Collaborative built blocks of flats in 1956-67; in Rotterdam, the Lijnbaan shopping and residential precinct built from 1948-53 set a precedent for pedestrian precincts that was adopted by many cities after the war; while in the East, Stalinallee in Berlin in the 1950s and later housing schemes in Moscow also reflected the modern movement (though the Russians also developed a taste for skyscrapers).

The establishment of the Hochschlule für Gestaltung at Ulm in 1955 with American finance revived for 13 years the design philosophy of the Bauhaus (Ulm closed in 1968) and, in terms of product design, led directly to the approach taken by Braun in its design of radios, radiograms and televisions, while in Italy an integrated design programme was maintained by Olivetti in its design of typewriters, office furniture and computers. Indeed, in the mid-1960s, designs echoing the modern movement could also be seen in Yugoslavia and East Germany (the German Democratic Republic). I well remember visiting the Leipzig Fair twice at that time and seeing domestic furniture that compared favourably with that promoted by the Design Centre in London. However, as 'Cold War Modern' makes clear, many of the designs in Eastern Europe never went beyond the prototype; all they were was window dressing.

When it came to cold war architecture, Buckminster Fuller's geodesic dome, developed for radar stations between 1955-56, demonstrates how a design originally intended for the military could be used for a festival (for example, Expo 67 in Montreal, where the dome still survives) and even by American hippies in Drop City, Colorado who were looking for an alternative society. Another prominent artefact was the telecommunications tower: in Moscow (its post-war Tatlin tower) once the tallest structure in the world; in Czechoslovakia, regarded as the most beautiful; and in East Germany, served by hostesses in futuristic costumes. Most towers had restaurants so were seen as prestigious public monuments.

The telecommunications tower signalled the advent of McLuhan's global village, the battle for supremacy over the airwaves and the importance of the computer. 'Cold War Modern' features both IBM's computer programme, significant for getting Americans into space, and Stanley Kubrick's '2001: A Space Odyssey' (1968), which reflected man's fear about possible dominance by computers and robots. The way in which robots, building nodes and modular components could be used for megastructures is also illustrated by Archigram's Plug-in City of 1964 and Walking Cities in the Desert of 1973. Similar ideas were developed by Archizoom in Italy and NER in Russia. Such megastructures could ignore national boundaries, be built on water or in the Arctic, and some, of course, incorporated many features found in space stations today.

By the end of the 1960s, however, the threat of imminent nuclear annihilation, illustrated in 'Cold War Modern' by Kubrick's 'Dr Strangelove' of 1962 and Le Corbusier's 'Poème électronique' of 1958 - a catalogue of cold war fears and hopes - had diminished. Instead, the Prague spring of 1968 continued the revelation of cracks in the Soviet empire while student unrest in Paris and the occupation of both the Milan Triennale and Venice Biennale of the same year indicated that all was not well in the West. Indeed, the occupation of the Italian exhibitions was by people who believed that art and architecture were being reduced to the status of commercial goods. 'Cold War Modern' suggests that the oil crisis, which followed in 1973, ended the post-war phase of the modern movement. Instead, architects like Archigram and Frei Otto were increasingly isolating man from his environment while the 'back to nature' movement (and countless other spiritual exercises) were trying to reconnect man to Mother Earth.

What 'Cold War Modern' avoids is any reference to the Swinging Sixties - indeed, there is not much fun in the exhibition. Nor, apart from space travel, is there much reference to transport, apart from the observation that America believed that cars should be privately owned whereas the Russians believed they should be hired when needed. The exhibition is also short on both Polish and Cuban graphics: Cuban posters in the 1960s were brilliant in their use of American artistic styles to lambast the Americans for their fear of an island only 90 miles off the coast of Florida. But as a commentary on how art and design was used by both sides during the cold war, the exhibition is a revelation. And it ends with a warning that remains as relevant today as when it was issued by the New York Times in 1970, 'Unless this flowering home planet remains a haven for life, the entire solar system may become as devoid of life as are the mountains of the moon.'

The picture taken of Earth during Apollo 8's mission around the moon in 1968 is a reminder of just how lonely and fragile our planet is.

'Cold War Modern' continues at the Victoria & Albert Museum in London until January 11. 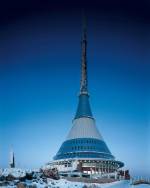 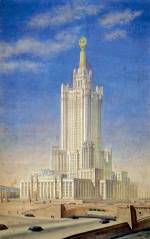