Following the Mexican Revolution of 1920, art that reflected the country’s traditions and social ideals blossomed – and, for a while, the US fervently embraced it 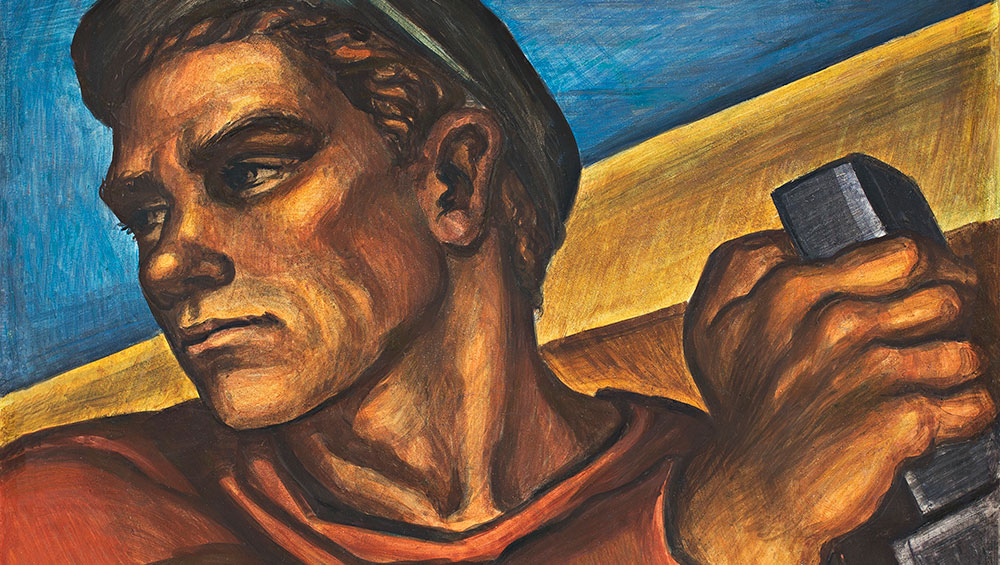 The story of the destruction of Diego Rivera’s mural for Rockefeller Center dominates art-historical mythology as a David and Goliath tale of censorship. But retelling the same story means others become forgotten, languishing as whispers. The Rockefeller Center mural was not Rivera’s first commission in the United States. By 1933-34, he had already completed several projects in California and Michigan. But why had Rivera come to the US after enjoying a steady stream of government commissions in his native Mexico? And why were audiences and patrons in the US so receptive to his artwork, so willing to sing its praise? Those questions are explored in the exhibition Vida Americana: Mexican Muralists Remake American Art, 1925-45, on view at the Whitney Museum of American Art in New York.

By the 1920s, Rivera was already an international celebrity for his role in the cultural renaissance in Mexico under President Álvaro Obregón’s new government. Seeking to unify a country ravaged by a decade-long civil war, Obregón supported monumental public mural projects that celebrated Mexico’s pre-Hispanic culture and traditions as well as the social ideals and achievements of its populist revolution. Leading muralists – José Clemente Orozco, Rivera and David Alfaro Siqueiros – were awarded the choice projects and enjoyed the benefits of giddy international press reports that brought American artists, eager to see the works and to learn from the masters, to Mexico. 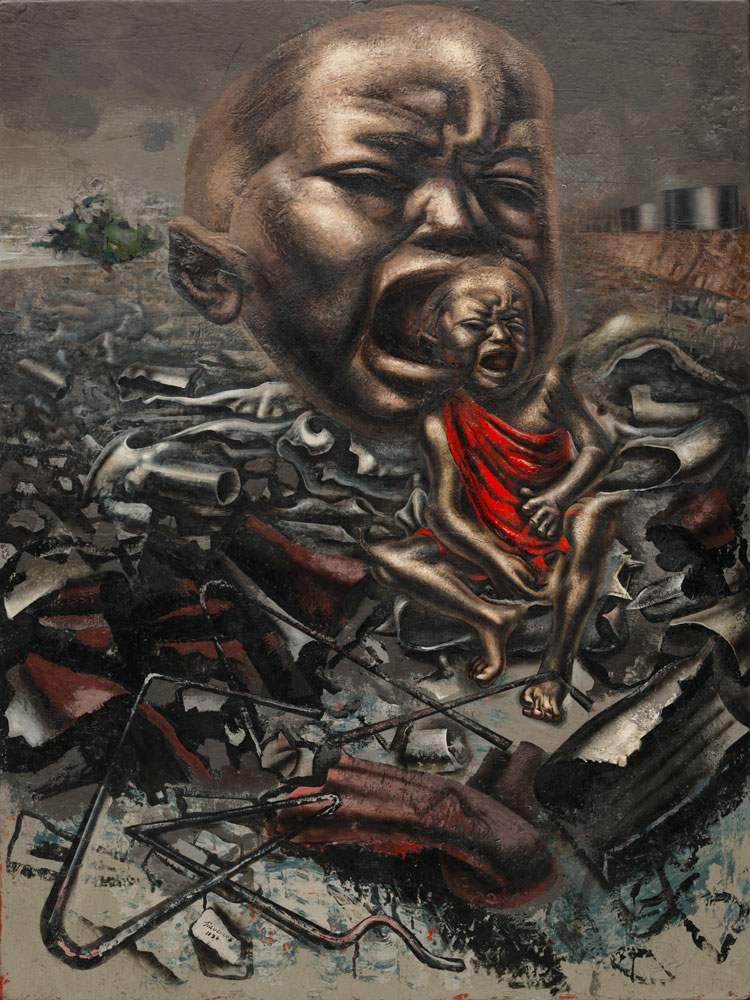 Since the turn of the 20th century, as industrialisation swept across the US, American intellectuals had expressed dismay at their country’s materialism and focus on individual achievement – evils they believed ultimately brought nothing but alienation and isolation. For them, rural life, such as that found in Mexican villages, represented a more authentic existence, a promise of a return to Eden. The folkloric themes so prominent in the new murals in Mexico were thus accessible as well as appealing to Americans. The wholesomeness of the agrarian lifestyle was also a powerful propaganda tool for Obregón and his allies: it offered a symbol on which to build a new national history, divorced from Spanish influence. Stepping off the elevator on to the fifth floor at the Whitney, you encounter images of the Indigenous population by Mexican and American artists. 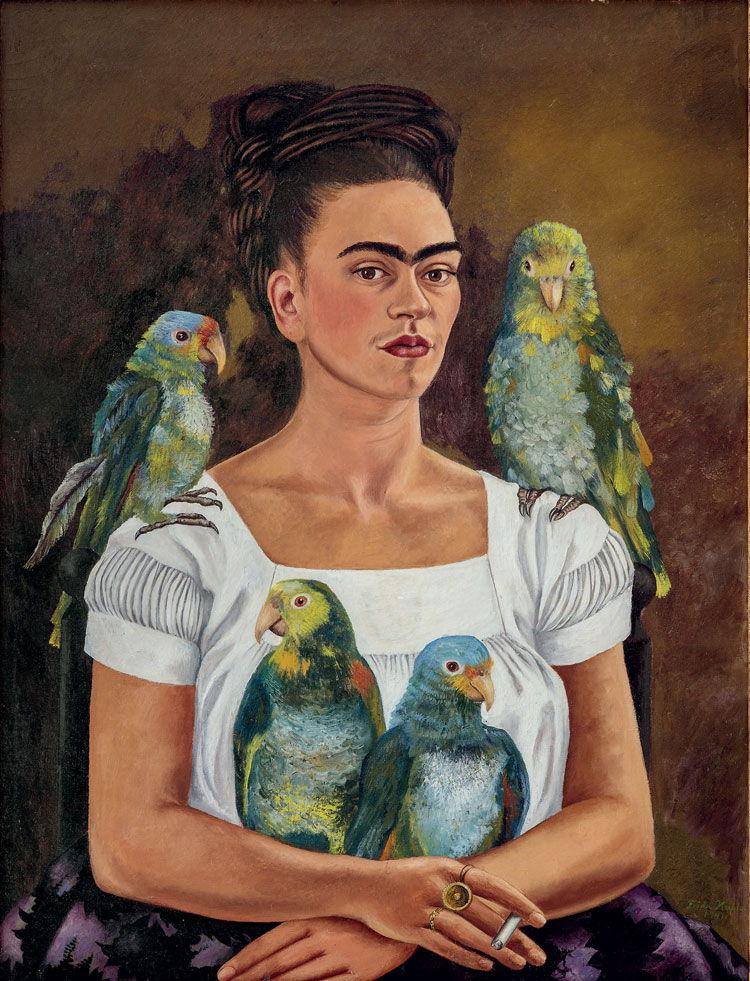 Frida Kahlo’s Me and My Parrots (1941) and Alfredo Ramos Martínez’s Calla Lily Vendor (1929) hang near Everett Gee Jackson’s Women with Cactus (1928), while Mardonio Magaña’s wooden sculpture Motherhood (1931) shares a room with photographs by Tina Modotti, Paul Strand and Edward Weston. Clips from a video produced by the tourist board in the 1940s extoll the wonders of traditional embroidery and floral headdresses, while an excerpt from the Russian Sergei Eisenstein’s unfinished film ¡Qué Viva México! (1932) shows a wedding in Tehuantepec, a city in southern Mexico often featured in the art of the Mexican muralists, particularly Rivera. The shared themes and subject matter in these works capture and promote the romantic vision of a more innocent existence, upheld by the noble peasant, a stereotype that ultimately also reinforced their marginalised status. 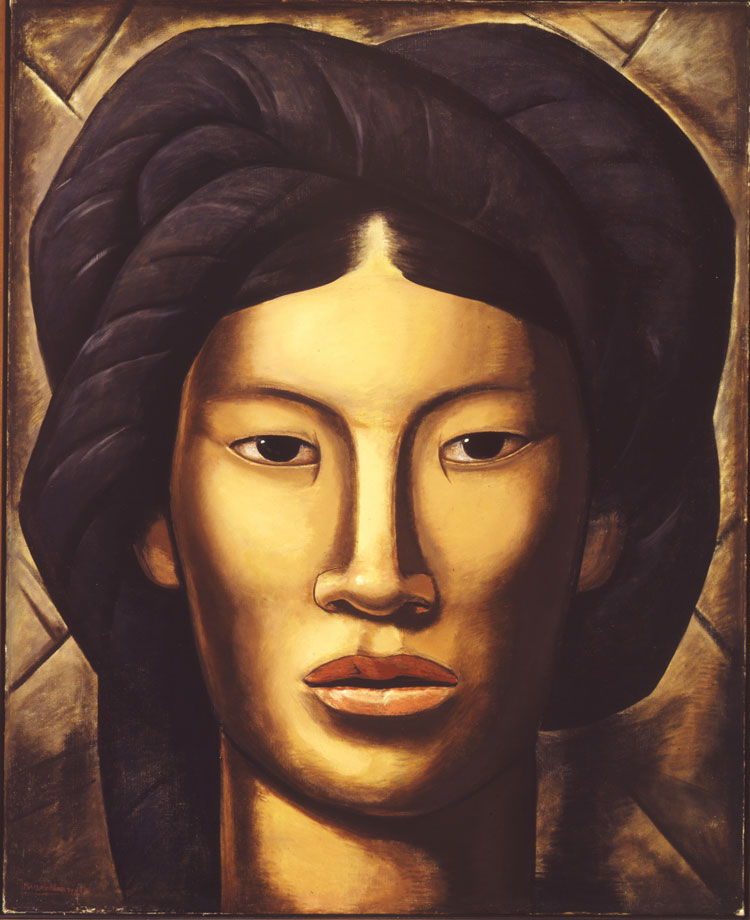 The heroic struggle of the Mexican population against Spanish rule and the dictatorship of Porfirio Díaz was equally important to the new Mexican identity, and artists balanced their romanticised portrayals of peasants with visual narratives of the people’s struggles for emancipation. Figures such as Emiliano Zapata, who led the fight for land reform and was assassinated in 1919, were elevated to the status of national heroes. While Ramos Martínez’s tightly filled canvas of Zapata’s followers conveys a sense of the group’s singular purpose, Orozco’s image of the revolutionary soldiers is more conflicted. Here, the figures seem to march more to death than to glory.

For American artists, part of what was so intriguing about the Mexican mural programme was that it had attempted to use art as a social force to inspire unity and to illustrate social wrongs. Perhaps one of the most surprising champions of the Mexican muralists was the American regionalist painter Thomas Hart Benton. Benton lauded their use of a modern visual vocabulary to speak directly to the public about relevant social issues and urged his fellow artists to follow their example. In the aftermath of the 1929 stock-market crash, as the US struggled to pull itself out of the Great Depression, American artists, too, remodelled elements of national history and everyday life into inspirational epics of strength and endurance. 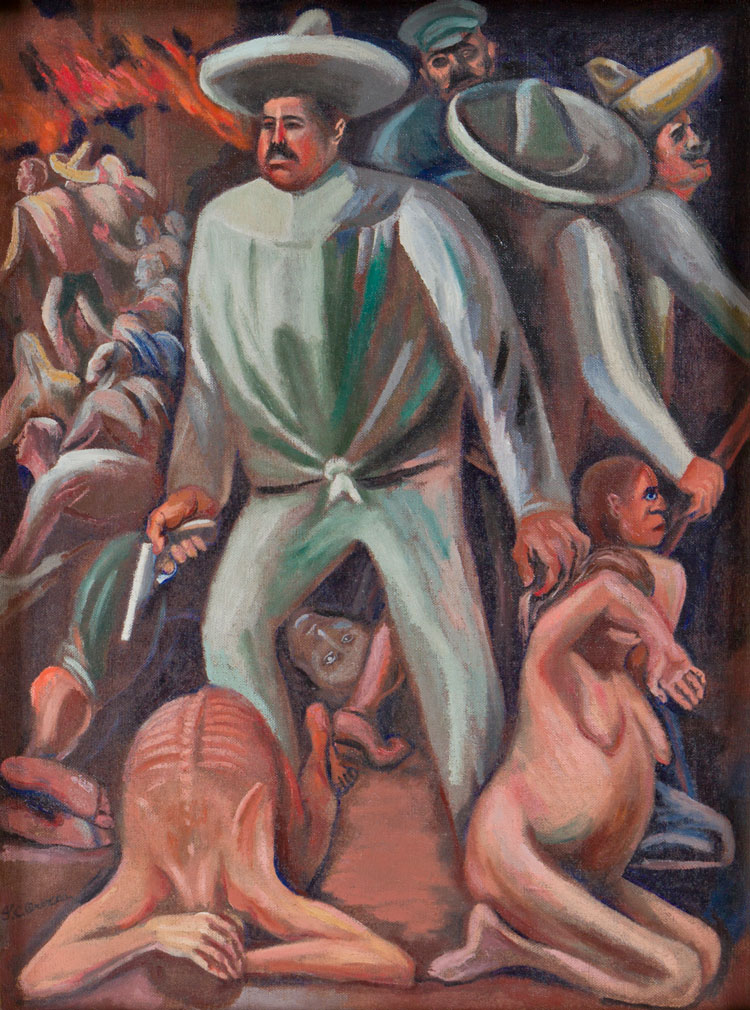 Indeed, the parallels between the missions behind the Works Progress Administration’s Federal Art Project in the US and the art programme under Obregón in Mexico are no coincidence. The WPA praised the Mexican mural commissions for their accessibility and for embracing the idea that art could be used for public good. Artists who received commissions under President Franklin D Roosevelt’s New Deal initiatives were directed to create works that promoted an equitable and prosperous past and present, ideals that could provide a sense of optimism about the nation’s future. All projects underwent a thorough government review process to ensure clarity of messaging (and to excise any communist undertones). Nevertheless, often the rejected ideas are the most compelling, such as Fletcher Martin’s studies for Mine Rescue (1939), a mural project for a post office in Idaho that borrowed too much from the Mexican muralists’ social critique and apotheosis of the underclasses to heroic status through their labour and personal sacrifice.

Hale Woodruff was among the many artist who travelled to Mexico to study with Rivera, drawn in particular to the Mexican muralists’ celebration of their people’s fight for freedom. Rivera’s influence as a visual storyteller permeates the mural cycle Woodruff created for Talladega College in Alabama, which depicts the 1839 rebellion aboard La Amistad (a ship illegally transporting abducted Africans), the civil rights trial won by American abolitionists, and the captives’ repatriation. Woodruff and many other African American painters thus constructed redemptive narratives of social justice out of their own history of oppression, resistance and liberation, transforming that history into a new shared identity, one that foregrounded the contributions of African Americans to national life.

When Rivera arrived in the US in 1930, his reputation proceeded him, and he quickly received commissions and was honoured with exhibitions. Yet his encounter with modern industry in the US also pushed his subject matter away from a focus on revolution and a condemnation of capitalism to celebrating the abundance of America’s natural resources and its engineering and industrial achievements. This shift unsurprisingly made his work even more palatable for wealthy American patrons and artists. 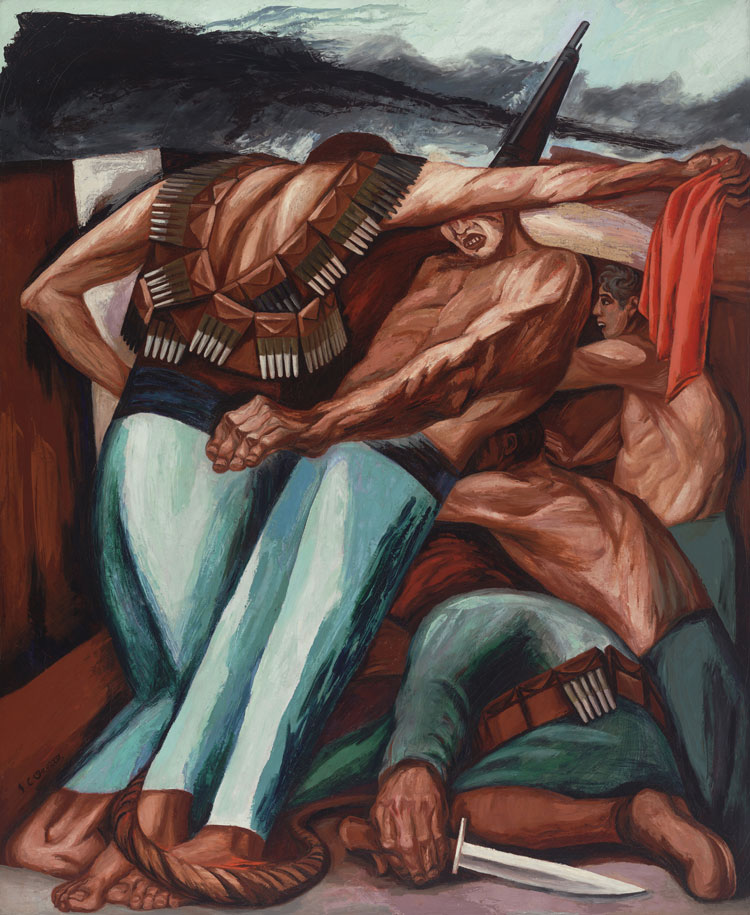 But Rivera was not the first leading Mexican muralist to come to the US once commissions at home declined after the inauguration of a new Mexican president in 1924. Orozco arrived in New York in 1927 and had completed his first large commission in this country by 1930 – a mural for the Frary Dining Hall at Pomona College in California. For this work, he focused on Prometheus, the mythical Greek Titan who incited the wrath of the gods by bringing fire – and thus knowledge – to humanity. Orozco embraced classical myths as tools to explore the human condition as he continued to receive major commissions from American institutions including Manhattan’s New School for Social Research, Dartmouth College in New Hampshire and the Museum of Modern Art. His style and subject matter were incredibly influential for American artists. Shortly after seeing Orozco’s mural in Pomona, Jackson Pollock’s eldest brother, Charles, wrote to him about the Mexican artist and his dramatic work. Intrigued, Pollock travelled from New York to see the mural the same year it was completed and kept a reproduction of it in his studio for the rest of the decade. Orozco’s sweeping diagonals and his evocation of visceral trauma reverberates within many of Pollock’s oil paintings and sketches created between 1938 and 1942. 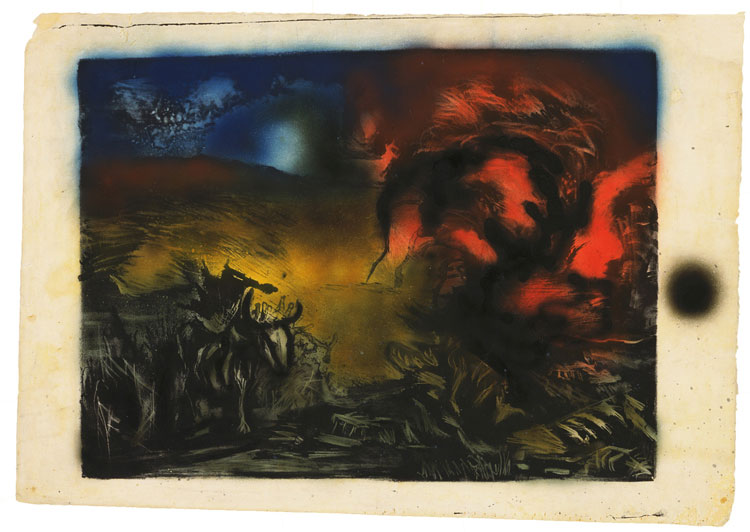 Siqueiros, the most politically and artistically radical of the leading Mexican muralists, spent seven months in Los Angeles in 1932, producing three murals. During his time there he adopted new tools and techniques – spray guns, blowtorches, photo projections – some of which he discovered from Hollywood set designers. He also embraced a collectivist approach to art-making, calling the group of artists who worked with him the “Bloc of Mural Painters”, a move that aligned closely with his communist beliefs. Siqueiros even encouraged two of his promising collaborators – Reuben Kadish and Philip Guston – to travel to Morelia in Mexico, where the two young artists completed a mural in the University of Michoacán’s museum. The exuberant style employed in that work echoes the baroque drama of their teacher. 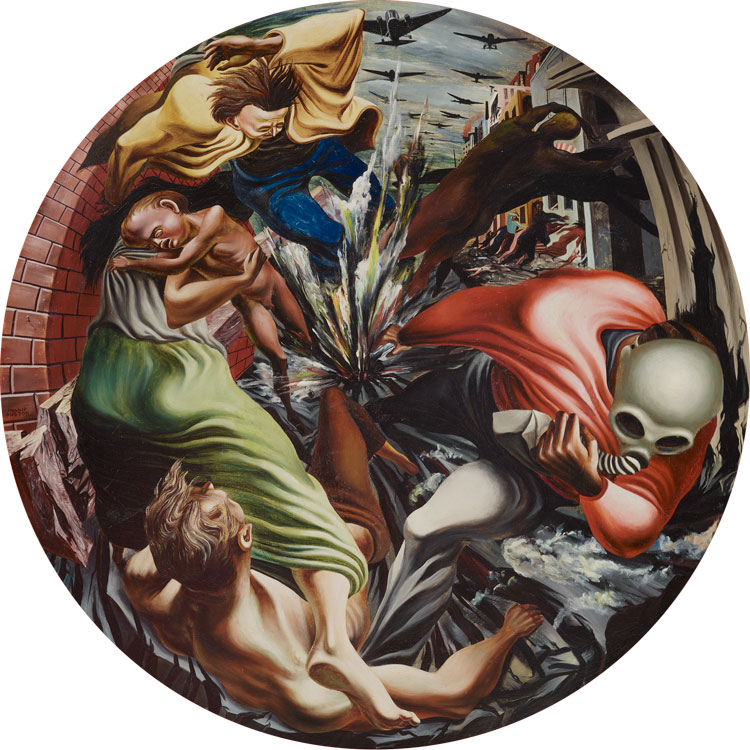 Yet the question remains: Why was the influence of the Mexican muralists forgotten? Sometimes the simplest answer rings true. The fable of the triumph of the New York art world over Paris after the second world war relies on the ascendency of abstraction and non-objective art and a proud embrace of nationalism. The Whitney’s show more than corrects the errors in this narrative, providing a more complete history of modern art in America and highlighting the importance of international, cross-cultural exchange. 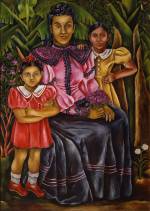 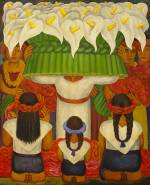 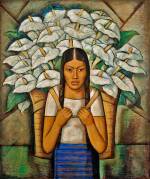 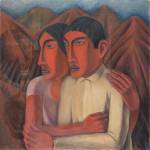