Frida Kahlo: The Artist in the Blue House(published 2003) is the most recent title in Prestel's list of excellent art books for children. Creatively conceived, well written and well designed, these are the most attractive books of their type on the market.

I had initially received two books to review on Paul Klee last year: Dreaming Pictures, Paul Klee (1997) by Jürgen von Schemm and Paul Klee: Animal Tricks (2002) by Christian Rümelin. As the titles imply, Klee is a perfect subject to aid the education of art for children, given that he himself sought to tap the innocence and candour of children's art. In both these titles, the choice of works is extremely good, allowing the reader to enter into the magical world of Klee's painting; the effect is to liberate a child's mind, not inhibit it. My youngest daughter, then aged eight, promptly produced 'portraits' of the family; ‘Man with a Big Mouth’ was particularly inspiring.

The graphics in these books are an instrumental factor making the ideas and questions posed accessible and enjoyable. Different fonts and letter sizes, as well as sentences in the shape of aspects or actual forms of the art works all serve to retain the young reader’s interest. It is very cleverly done and poetic in nature. The pictures are presented on one page with the text in a variety of forms on the opposite page. In our family, favourite pictures have subsequently inspired amusing stories, as well as numerous imitations.

These books are not limited to a narrow age group. On an educational level, Dreaming Pictures is full of creative ideas to interest four to six year olds, while also introducing ideas pertaining to the formal elements of picture making, such as energy, direction of lines and the meaning implied in colour, suitable for a ten year old. These might seem like obvious ideas, but there are surprisingly few good books about art for the very young. An older age group will pick up on aspects of the text that suggest the poetic nature of symbols and colour.

Within the Adventures in Art series (now numbering almost 30 titles) there is a wide range of approaches. The books are not formulaic in any way. Published at the end of last year to coincide with the Royal Academy's blockbuster exhibition ‘The Aztecs’, The Secret World of the Aztecs by Ferdinand Anton (2002) was designed for young children as an introduction to Aztec culture. Given the massive catalogue that accompanied the exhibition, with essays by world experts on highly specialised areas of Aztec culture, Prestel's small and accessible book, scholarly and clearly presented became, in fact, a very good and quick way to orient the uninitiated to the exhibition. Ferdinand Anton discusses the subject in a thematic manner: the history of the Aztec Empire, the rulers, calendars and pictographs that children had to learn. There are sections too on Aztec gods, human sacrifice, rituals and daily life. Aztec arts are well described as belonging to all aspects of life. Like the other titles in the series, The Secret World of the Aztecs, is fully illustrated in colour with art works and photographs. Precision is maintained yet the text is accessible for children of all ages.

Frida Kahlo: The Artist in the Blue House, edited by Magdalena Holzhey (2003), introduces the challenging and, at times, enigmatic art of the Mexican artist (1907-54), with a certain originality and aplomb. Holzney presents Kahlo's dramatic life using diary extracts and photographs to conjure the life of this remarkable and courageous woman artist. Techniques, such as collage, are described, the tragedy of Kahlo's life – a large part of which was spent confined to a wheelchair – are interwoven with her marriage to, and divorce from, Diego Rivera. The book presents this exceptional individual in a natural and interesting manner. Perhaps not such an easy subject for children as other titles such as Hello Fruit Face! The Paintings of Giuseppe Arcimboldo, or A Jungle Expedition: Henri Rousseau, the Kahlo book is a welcome addition to the list, for it expands the repertoire of art education for children away from the more amusing and light-hearted. 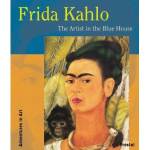