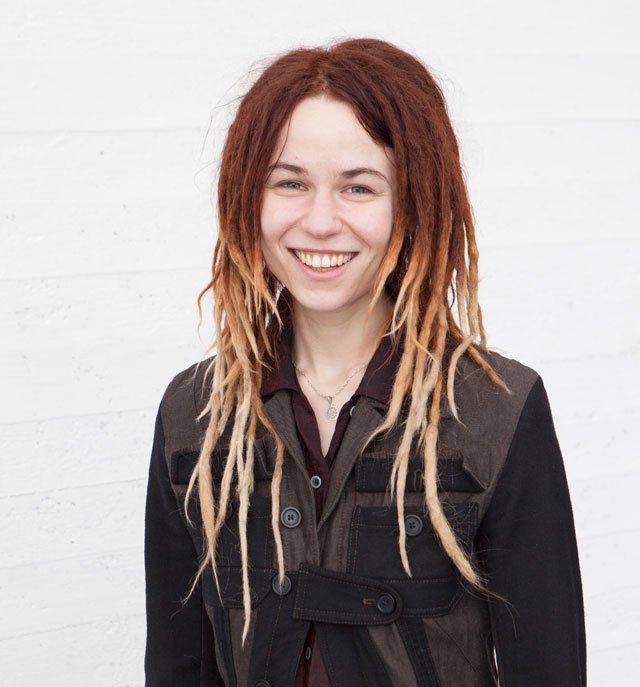 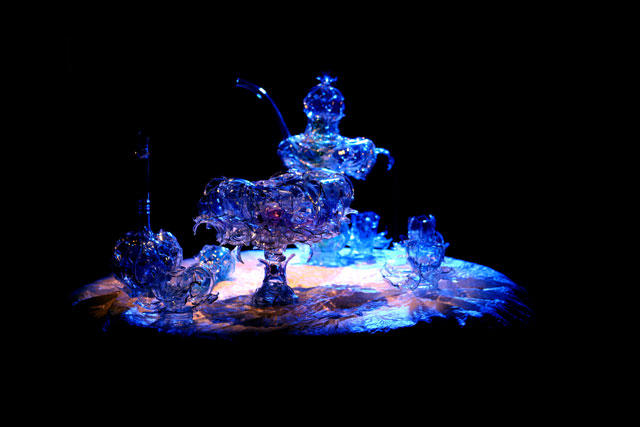 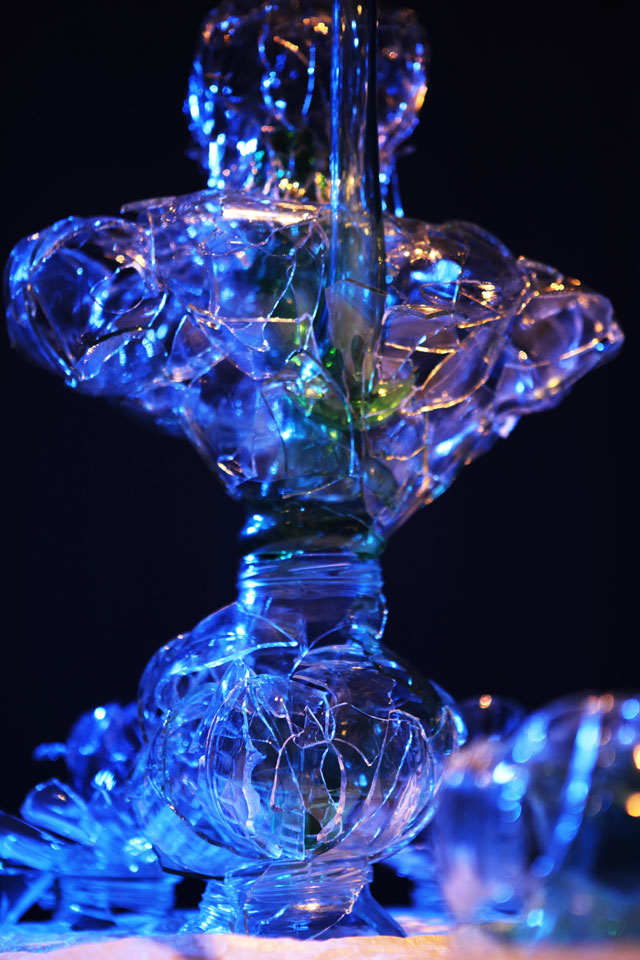 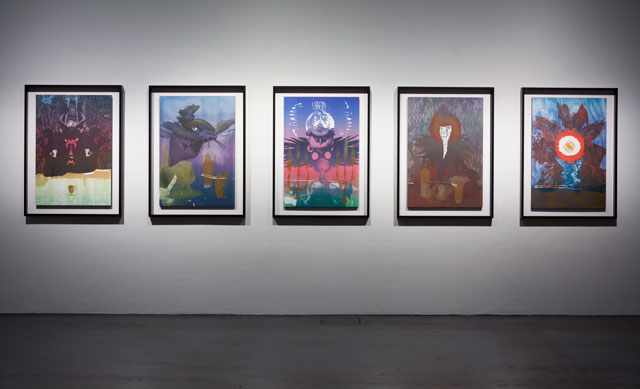 Alge Julija Kavaliauskaitė: ‘There is something about glass that I am continually drawn to’

Kavaliauskaitė, originally from Lithuania but now living in Finland, talks about art and alchemy, haunted mansions, her latest exhibition and why she was drawn to live in Nuutajärvi, a village famous for its glass-blowing

Alge Julija Kavaliauskaitė (b1992, Lithuania) is a printmaker and glass-blower, living in Nuutajärvi, a village in the forest, 150km north of Helsinki, famous for its glass workshops. I came across Kavaliauskaitė’s gnostic prints in There And Back Again, an exhibition of young artists from the Baltic region, now at Kiasma Museum of Contemporary Art in Helsinki. Framed along one wall, Kavaliauskaitė’s prints, collectively titled Evening Breakfast (2016), contain diaphanous animals in fuchsia and teal, shimmering golden goblets and tall teapots, walls of flickering blue flames in which faces begin to emerge. 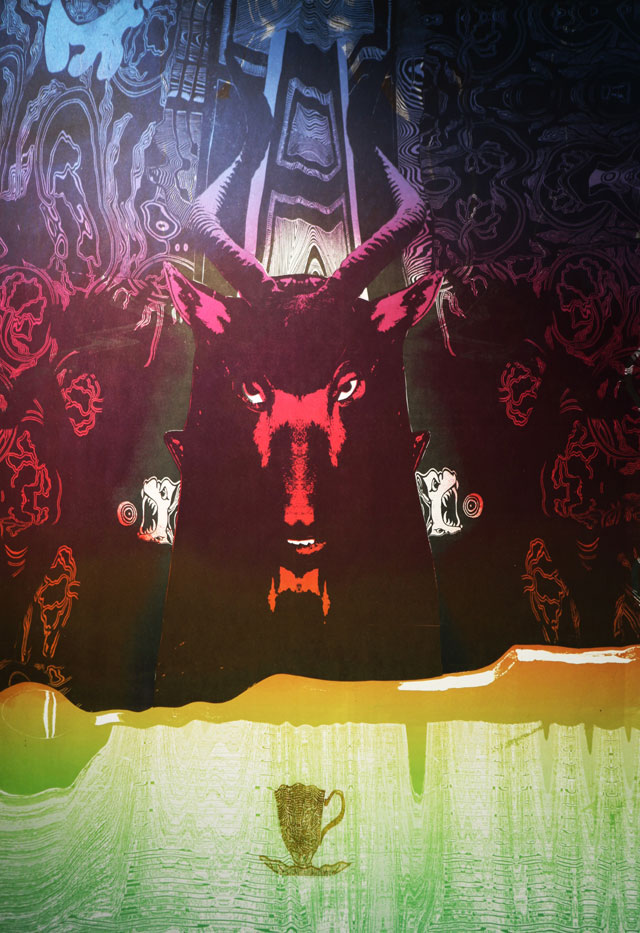 A Lithuanian artist living and working in Finland, Kavaliauskaitė draws from local traditions of glass-making, and histories of Finnish shamanism. Over the following weeks, we spoke of the occult nature of her practice and the “guests” she invites into her glass and ink. Communicating via Skype, our voices occasionally scrambled pops and squeaks, our conversation moved between art and alchemy, haunted mansions and glory holes. Beyond the window of her studio, the Siberian winds arrived in Nuutajärvi forest. Snow began to fall. 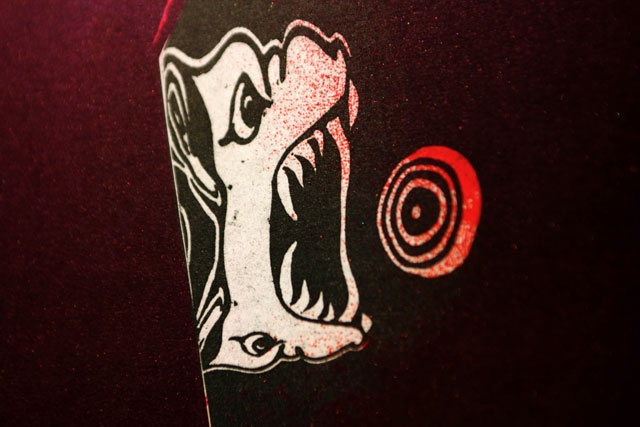 IZABELLA SCOTT: The five lithographs that make up Evening Breakfast (2016), exhibited at the Kiasma Museum in Helsinki, are colourful mystical prints that show gatherings of sorts. You have described them as designs for tabletops, but there is something occult about the prints, as if they reference the tables of a seance, or meeting points of the human and spirit world.

Alge Julija Kavaliauskaitė: It’s not fashionable to talk about symbolist art, or occult art – that is, art based in gnostic knowledge, hermetic knowledge, alchemy or occultism. It has a slippery place in art history, and often it’s not even considered art. So, I often wrap the meaning of my work in other words, or use allegory to hide its meaning – but there are always hints. The prints you describe in Evening Breakfast are actually half of the work. The second half is a table, which stands in the centre of the room. On the table are golden dishes, which act as a kind of offering. When there is a table and there is an offering, then I can invite the guests – and the party begins. 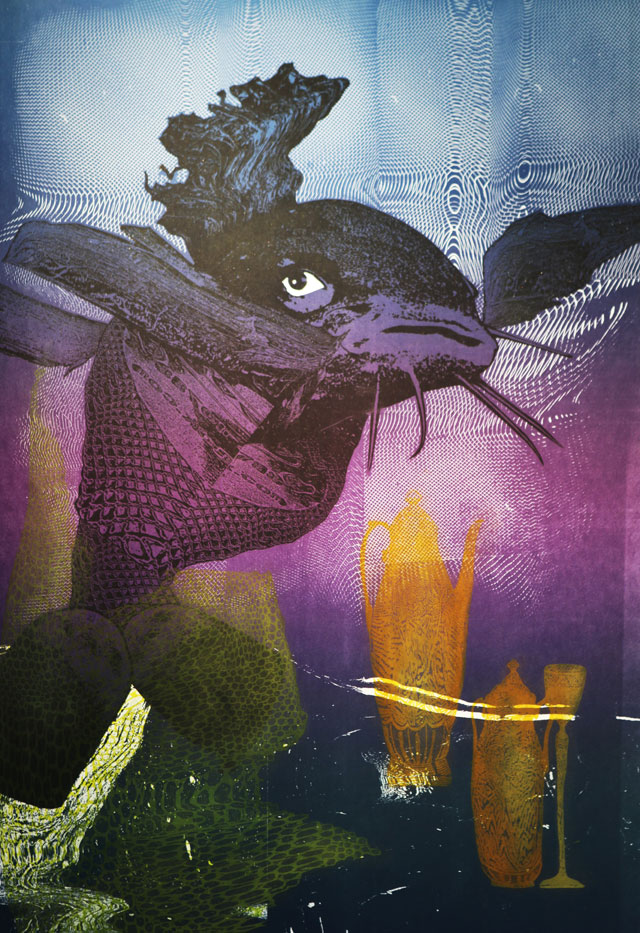 IS: Who are the guests?

AJK: The first print is for [the film-maker] Alejandro Jodorowsky. I find Jodorowsky and his work extremely interesting, and I often communicate with him through my art. Another guest is Yayoi Kusama, the print titled Not in Rivers, But in Drops (2016) is for her. I’m very drawn to the way Kusama combines micro and macro cosmoses, all through the dot. To skip forward, my fifth guest is Frida Kahlo. The fifth is important because, the number five brings strength and imbalance. I gave the fifth print, Iron Heart (2016), to Frida. In the work, you can see a hermetic object, a round globe, in which there is the heart foaming and seething on blue fire – and iron turns into gold. 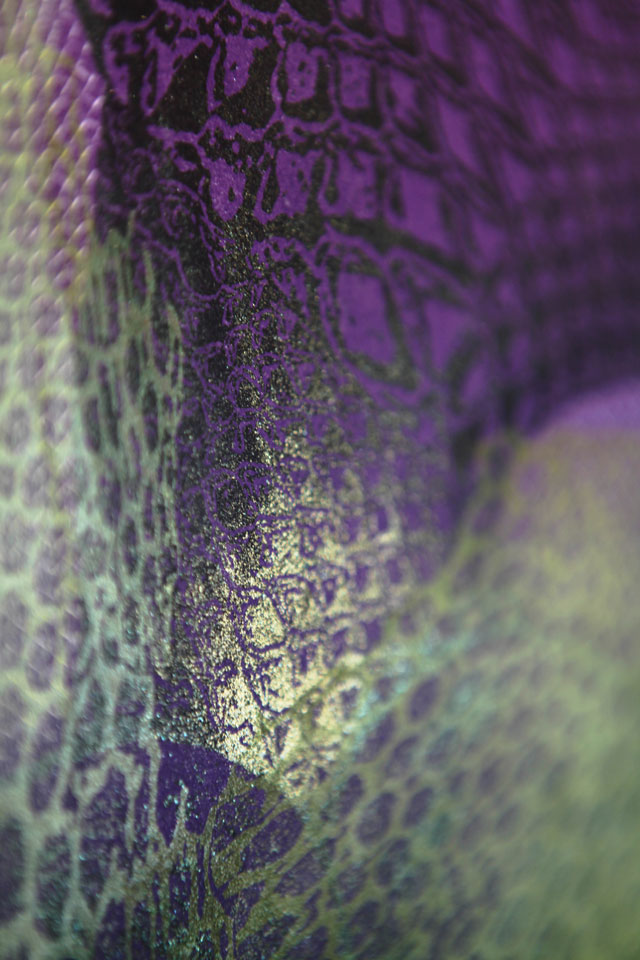 IS: The images are full of golden cups, candlesticks, stags with narrow eyes, and flying fish – and they remind me of Tarot cards. Do you see them as such?

AJK: They are hidden meanings, but the images are not reversible – they can only be read from one direction – so I don’t see them as Tarot cards. But I am working on a new installation called Fallen Angels, made from paper and glass, which can be seen from either direction. In this work, I am communicating with John Donne, a poet, mystic, philosopher and alchemist, who thought a lot about the dualism of body and soul.

IS: You are living in the forest, in a village called Nuutajärvi, which is about 150 km north of Helsinki. What draws you into the forest?

AJK: Nuutajärvi is the oldest working “glass village” in Finland, where there have been glass furnaces burning for 225 years. In 1793, the glass factory was established in the forest where there was a plentiful supply of fuel. I have lived here for two years, and I blow glass every day. The workshops do not have heating, and in winter the only sources of heat are the furnaces and glory holes. The old concrete floor crumbles under my feet, and I touch iron every day. The tools for working with glass are mostly made of iron: jacks, diamond shears, scissors, puffers, iron rods and blowing pipes. It’s a careful craft, and working with glass takes all my attention, so I barely remember my body – but it teaches extreme concentration. 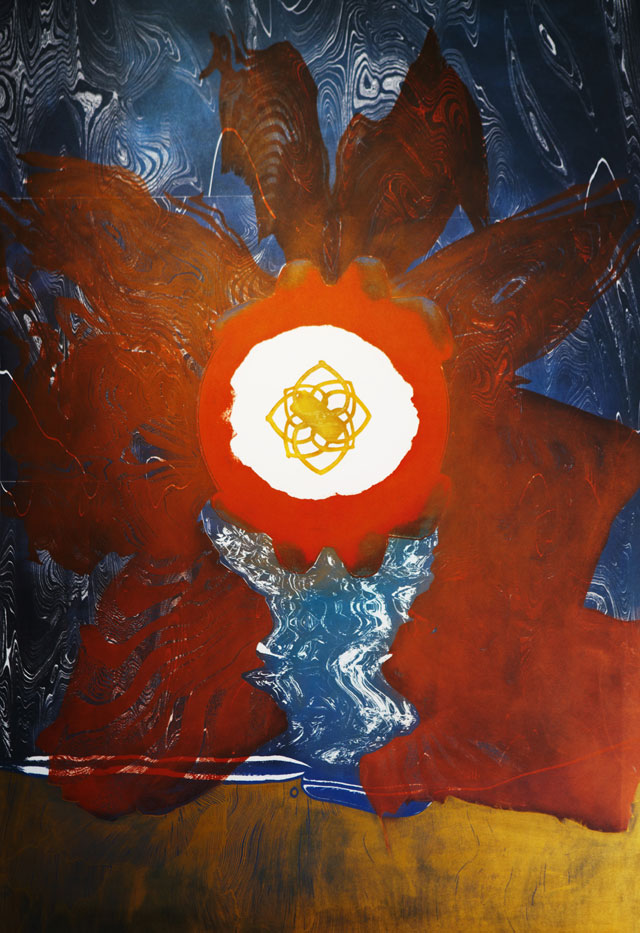 IS: In the series Mensa Illuminata (2016), a set of glass objects, which look like shimmering, splintering glass teapots, are displayed on a table covered in crinkled Japanese paper. Are these glass fragments forged in Nuutajärvi?

AJK: “Mensa” is the Latin word for table, and these are objects I make from glass waste – broken jars and bottles and bowls – which are then illuminated. There is something about glass that I am continually drawn to, partly because of its transparency. I’ve worked with paper since I was a child, but I always wanted to somehow make paper transparent. I tried all sorts of different papers – but it was never possible. Then I found glass, and the quality of glass is translucency: the light can go right through it. Living here, I work in the glass workshops every day, and by the evening, there are more broken things than whole things. Once glass is broken, there is no way back – it will always have a fissure. But my glass sculptures put this fragility and fracture to use. 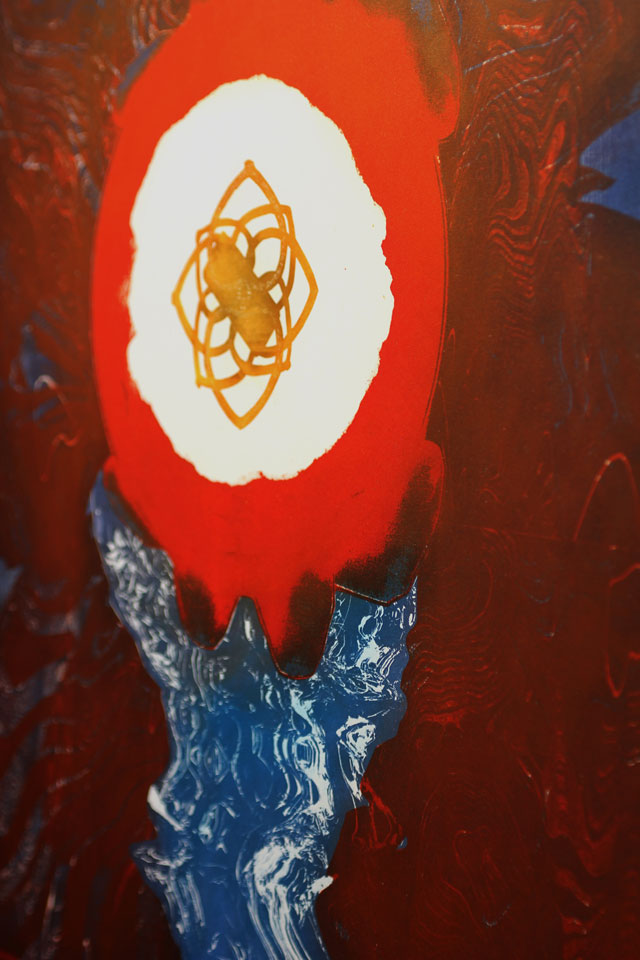 IS: For the lithographs in Evening Breakfast, you have also described using rubbish. Are you looking for certain shapes, or symbols in the wastebaskets?

AJK: I never make sketches, but I conceive the works in my head. The image builds and grows until I feel physically ill – and then I know it’s time to work. By this point, I have a clear idea of the image in my head, and so I begin to collect the material I need. For the work with the guest Salvador Dalí, titled Black Gives Way to Blue (2016), I had an image in my mind of a flying fish. To make a fish, I needed a net, so I made one from a sieve from my kitchen. Most of the images in this part of the work are made of rubbish or clothes, household items or personal belongings, and the fish is also made from plastic packaging in which grapes are sold in the supermarket. I am always collecting up chewing-gum wrappers or medicine packets or labels. Once I have assembled the image, I copy it using a Xerox machine. Then from these copies, which number in the thousands, I cut parts out and begin to assemble a collage. The collage is built on a transparent plastic sheet of film and every part of it is soaked in oil so that it becomes translucent and I expose it on a photosensitive plate. The very last stage is to print. 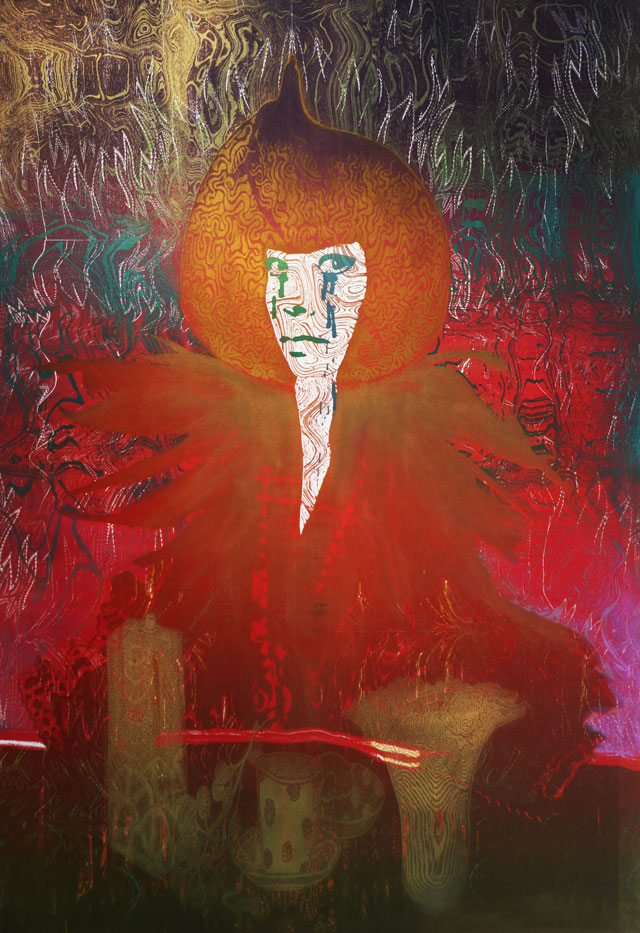 AJK: You have mentioned that you use a Manroland press – an old piece of technology from the 1940s. Why did you choose this press?

AJK: Offset lithography has a long history – the first offset press was developed in England in 1875 for printing on tin. There were various developments for printing on paper, and the Manroland press came out of this tradition. I discovered the press at the Academy of Fine Arts in Helsinki, when I was studying there. It’s an archaeological thing – a huge, very beautiful machine that takes up a whole room. The rollers mix the ink, and they look like rainbow-coloured pipes. I like to work with my hands and with raw materials, and I think of my practice as somewhere between printing, photography and painting.

IS: How does painting fit in?

AJK: As I build up the layers of the collage, I paint the surfaces in gold and silver powder, and other precious metals. I often use pure oxides, such as the glitter that occurs naturally in some stones. Of course, there are many chemicals in the printing process, but I also like to use natural oxides because the colours are really beautiful, and they have a different quality – like watercolours that have honey in them, rather than synthetics. 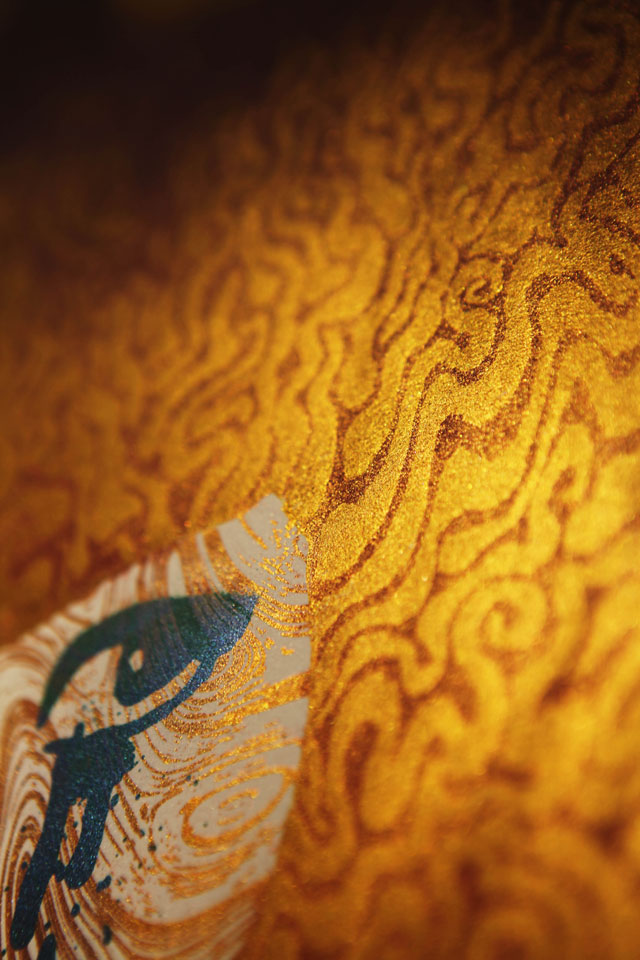 IS: Your glass is often coloured like jewels. Do you tint it yourself?

AJK: There are different ways to colour glass. The first and most ancient method is to use iron oxide impurities to produce green tones in glass. High quantities of manganese can create a deep violet colour. Sulfur and carbon produce amber, chromium makes shades of emerald, and selenium creates a famous ruby tint. There are many colours that can be made with oxides: shimmering yellows, opaque reds, or opaque whites. Another way to tint glass is to apply powders on the surface, which can be very beautiful, making the glass look like a piece of jewellery. I use all these methods in my artistic practice.

IS: Do you feel bound to Nuutajärvi by your craft?

AJK: Glass is strange and special. I have worked with paper and wood and metal and stone – but glass is something else entirely. I came to Nuutajärvi after I’d been studying glass-blowing in Jerusalem. It’s not just the furnaces that keep me here. It is very beautiful, and I take inspiration from the sun, the lakes, the river and the trees. I’ve lived in Finland for seven years and I find the culture so interesting. Outside the cities, Finnish shamanism still has roots. This is the history of the Lappish or Sami people, who say the soul can move out the body, and that the body can shapeshift. Perhaps this culture has survived because of Finland’s geography – it is removed from the flows of central Europe. Lithuania, where I grew up, has more of a Christian influence that melted into pagan traditions. 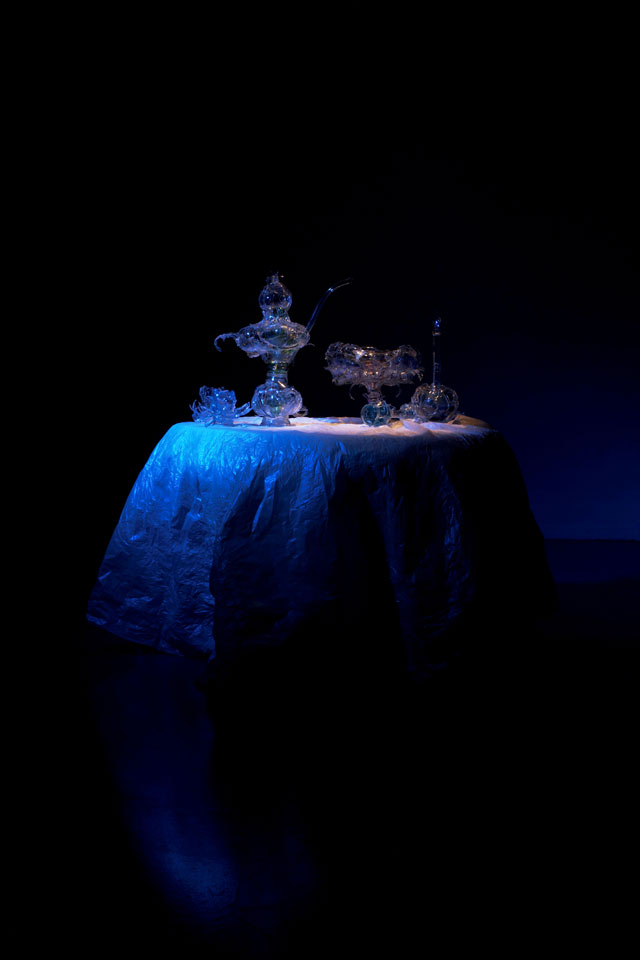 IS: Are there shamanistic traditions in Nuutajärvi that you are drawn to?

AJK: I will tell you a story. After two months here, as I was cycling around in the forest, between the lakes, I came across the Nuutajärvi mansion, a huge neoclassical building with an elegant art nouveau interior. It is a very old house that was supposedly built by Johan Sirén, an architect who built the Finnish parliament. One of the last owners was another architect, Harald Neovius, and his wife Jenny Neovius, a well-known medium who held seances in the mansion. The house became a meeting point for political figures of the time and many upper-class Swedes and Finns. After Jenny Neovius’s death, the house was left untouched for many years, and is now owned by a doctor. He says there are three ghosts living there – a lady in white, a little girl and a man who hides in the bathroom. There are many oral histories; Nuutajärvi is a very strange and peculiar place.

IS: When you talk of contacting Kahlo or Jodorowsky, is this a metaphor of artistic influence? Or do you identify as a magical practitioner – a witch, say?

AJK: Descriptions of the witch have changed so much through time, and it’s hard to know whether it was always a punitive label, or even something more. My work is a method of communicating. It’s the material truth of immaterial things. It helps me to talk with beings around me and talk to myself. I’m not interested in labelling myself as a witch. On a practical level, I’m an artist – this is my magical practice.

Alge Julija Kavaliauskaitė’s prints Evening Breakfast (2016) are on show at the group exhibition There and Back Again, at Kiasma Museum of Contemporary Art, Helsinki, until 24 March 2018.