Edvard Munch: The Modern Life of the Soul

Edvard Munch: The Modern Life of the Soul

'I was walking along the road with two friends. The sun set. I felt a tinge of melancholy. Suddenly the sky became a bloody red. I stopped, leaned against the railing, dead tired, and I looked at the flaming clouds that hung like blood and a sword over the blue-black fjord and city. My friends walked on. I stood there, trembling with fright. And I felt a loud, unending scream piercing nature.'
Edvard Munch, Nice, 22 January 18921

For many people outside Norway, Edvard Munch is a one-picture painter. So iconic is his 'The Scream' (1893) that it has become the Mona Lisa of neurotics, the Whistler's 'Mother' of paranoids. The Museum of Modern Art has foregone including any of the paintings of the famous image in its current, ambitious retrospective, 'Edvard Munch: The Modern Life of the Soul', which runs from 19 February to 8 May 2006. (The recently stolen Munch Museum variant was neither the first nor is the best.)

The show does have two copies of a later lithograph of 'The Scream'; one plain and the other hand coloured, but these are less dynamic than any of the paintings. Munch's savage colour is as disturbing as his catatonic line. Also included in the exhibition are two other haunting pictures of the period: 'Despair' (1892) and 'Angst' (1894), which show that same blue-black fjord and city beneath flaming clouds but without the undulating terror that permeates every stroke of 'The Scream'. Scrawled on the first version in faint pencil is the warning, 'Could only have been painted by a madman'. At first glance, a Munch retrospective without his most famous picture seems like a performance of Hamlet without Hamlet. But in the end, the curators wisely concentrated on other works that reveal the raw, emotional range of Munch's extraordinary achievement as a painter and printmaker.

Munch was a courageous and difficult artist. 'All art, literature and music must be born in your heart's blood', he insisted. 'Art is your heart's blood.'2 He took risks. He dared to make mistakes, and there are some dreadful paintings at MoMA. His constant experimentations do not fit into neatly defined periods like Picasso's do. Early in his career, while in search of his own style, Munch seized on various technical tricks he found in the art of Degas, Gauguin, Lautrec, Redon, Seurat, Van Gogh, Vallotton, Vuillard and other contemporary painters in Paris - and then just as freely abandoned them. Munch was not an Impressionist. He was less interested in the seductive surfaces of things than in the emotional truth beneath. There is none of that Parisian joie de vivre in his mature work. His distinctive vision as an artist finally emerged, after years of study and experimentation in the early 1890s in powerful paintings of broad strokes, jarring colour and disturbing psychosexual content. Munch did not paint pleasant pictures for the parlour. He concentrated on the decay of the flesh. He had many reasons for his melancholy: his mother died when he was four, one sister went mad and another died of tuberculosis at the age of 15. Munch was often ill, both physically and mentally, and spent a good deal of his long life in sanatoriums. His love affairs were disastrous. While Van Gogh sacrificed an ear, Munch shot the middle finger of his left hand after the break-up with his finance. Munch was not a sentimentalist. He raised his many intense deathbed scenes from the maudlin to the sublime, but there is no joy in any of his lovers' beds.

Munch has often been aligned with the Symbolists, but his raw, searing paintings have little in common with the effete preciosity of Puvis de Chavannes and Gustave Moreau. There is nothing polished or pristine about his subject matter or technique. He subjected his pictures to his 'horse cure' by leaving them outside to test their resilience to the harsh Norwegian weather. His supreme subject was Sex, but his frequently perverse art is neurotic rather than erotic. It is no surprise that the German Expressionists embraced Munch as one of their forefathers. He was an Expressionist before there was such a thing. He was an Outsider long before there was anything called Outsider Art. Predictably, Hitler and his Nazis condemned Munch as entartete (degenerate). Munch's audacity makes his art feel fresh and contemporary.

Munch's work is always agitated, rough, rude and incomplete. The world he depicts seems to be in constant flux, at the point of some sudden tragedy. One wonders on viewing the three young women by the rail in the throbbing 'Girls on the Pier' (c. 1901) who will be the first to jump. Munch was continually at war with nature, both physical and human. He plied his lonely beaches with massive, aggressive muscular rocks. Munch was the poete maudit of misogyny. He did not glorify the female body as had Manet or Renoir, for anatomy bored him. 'Just as Leonardo [Da Vinci] studied the recesses of the human body and dissected cadavers, I try from self-scrutiny to dissect what is universal in the soul,' Munch explained.3 He feared women. Their voracious erotic appetites threatened him. But could he really have hated them as much as these paintings suggest? Their flaming red hair ensnares their lovers in an endless spider's web of deceit. His Madonna with her scarlet halo is just a whore in pursuit of her own sexual gratification. The cause for the mother's grief in 'Inheritance I' (1897-99) is syphilis. Even when together, his lovers are alone.

The centerpiece of the MoMA show is the enticing 'The Dance of Life' (1899-1900), which depicts the painter himself waltzing with another red-headed temptress in scarlet, the couple flanked by two women (perhaps the same women at different ages) ready to cut in; the one on the left virginal and in white, the other older and in deep mourning. Among the other dancers is a green-faced lecher so intent on seduction that he seems about to bite the neck of his next young victim or strangle her in an amorous embrace. Perhaps the moody Norwegian found no pleasure in sex. Yet he was a true Modernist in recognising that women are, indeed, intensely sexual beings. Once he shed the yoke of Symbolism in the early 20th century, Munch was free to explore a new sensuality in his paintings of female nudes and a remarkable triptych of naked men on the beach. There is real flesh on these bones. But there is never anything pretty about his confrontational art.

Munch's portraits, too, are challenging. Ibsen, Strindberg, Mallarmé and Hans Jaeger sat for him, and he produced a striking posthumous painting of Nietzsche. Although there is a lovely picture of his sister, Inger, from 1892, and another, from 1903, of Dr Linde's four sons looks like a parody of John Singer Sargent's glamorous portraits, generally, Munch did not flatter his subjects and was no gentler with himself. MoMA presents a wide variety of self-portraits that run from the arrogant young genius all in blue (1895) with his stern face and lit cigarette to the peculiarly androgynous red pastel complete with breasts, drawn about 14 years later. Munch was a masochist who nailed himself like a yellow Christ on a cross in 'Golgotha' (1900) while friends mill around, mocking him. 'Self-Portrait in Hell' (1903) is one of the most outrageous self-portraits in all of Western art, the defiant naked artist consumed by the fires of eternal damnation.

Munch was perhaps most original as a printmaker. There are some drawings in MoMA's show but, for the most part, these were just the artist's means to an end, and not masterworks on their own. Munch did not merely prepare his printing plates - he assaulted them. He scratched and slashed and smeared and gouged the surfaces. Like George Bellows, Munch often reconceived his best-known paintings as fine prints with remarkably inventive results, sometimes improving on his original iconography. At some point between 1895 and 1902, Munch pumped up the blasphemy of his 'Madonna' (1894-95) by enclosing a lithograph of it within a bloody frame of rushing sperm and adding a ghostly fetus in the corner. He abandoned a black plate in the predominately red lithograph of 'The Sick Child' (1896), which immortalised his consumptive sister Sophie's steady decline. His most famous image after 'The Scream' is 'The Kiss', a composition he continued to rethink almost up to his death in 1944. It first appears in a relatively disappointing painting of 1892, but it was as a two-colour woodcut made six years later that Munch's 'Kiss' entered the common visual vocabulary of 20th-century art when he boldly printed the flat black silhouette of the couple on top of the raw grain of the wood. Here is pure passion with none of the delicacy and filigree of Gustav Klimt's equally celebrated 'The Kiss' (1907-08). Munch's lovers seem to be sucking the very life's breath out of each other. He returned to the theme just a year before his death; in its final conception, the passionate couple are nearly lost within the pulsating rhythm of the dominant wood grain. Even to the very end, Edvard Munch remained defiant and naked before the world. 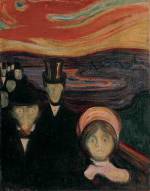 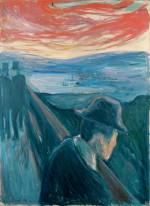 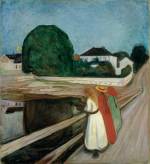 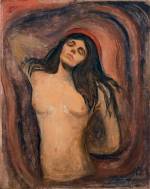 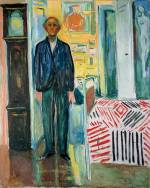 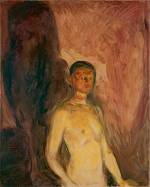 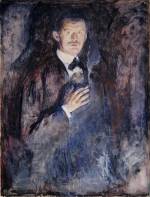 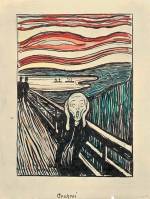