Renaissance Impressions: Chiaroscuro Woodcuts from the Collections of Georg Baselitz and the Albertina, Vienna

Renaissance Impressions: Chiaroscuro Woodcuts from the Collections of Georg Baselitz and the Albertina, Vienna

Renaissance Impressions is a comprehensive survey of some remarkable pieces of printmaking from the 16th century. The robust figures of saints, philosophers, classical gods and witches occupy the walls of this scholarly exhibition.

Charting the development and spread of the chiaroscuro woodcut from its roots in Germany, Renaissance Impressions showcases more than 150 rare prints from the collections of the Albertina Museum, Vienna, and the artist Georg Baselitz. Due to restricted space, many of the prints from the exhibition’s original incarnation in Vienna have been be excluded. But this distilled version works just as well. Sometimes less really is more.

The woodcut was a marvel of mass production. Woodblocks were more durable than copperplates, a single one capable of producing hundreds of prints over 30, 40 or 50 years. But it was the introduction of colour to these prints for the first time in Europe that saw the start of a whole new artform. The use of several tones within one image is referred to as chiaroscuro – literally light/dark. Its invention is credited to both Lucas Cranach the Elder, who postdated a print so that he could claim to be the sole inventor, and Hans Burgkmair. It was quickly taken up by artists from Italy and the Netherlands and became a truly Renaissance artform in its own right.

Dr Achim Gnann, one of the curators of this exhibition and curator of Italian art at the Albertina, explained to me the stylistic differences between the German and Italian practice of woodblock printing: “In Germany, the prints are very linear, the black lines have a descriptive quality. In Italy, they started from this German manner using this one linear block and the white of the paper, and then they used more and more blocks and more and more tones.” The result is a wonderfully fluid, painterly image; a remarkable feat when one considers that each print is the result of a series of impressions carved from wood.

While a great deal of emphasis is placed on the Italians in this exhibition, some of the most playful and intriguing prints are, in fact, German. The artist Hans Baldung achieved notoriety for his print depicting naked witches. The group are shown in the act of boiling up a potion in preparation for the Sabbath, surrounded by all manner of diabolical paraphernalia. Baldung served an apprenticeship with Albrecht Dürer, who rejected the use of the chiaroscuro technique, feeling that his prints didn’t need colour. A later woodcutter disagreed and added a tone block to the German master’s famous Rhinoceros – included here. But the mischievous nature of the German chiaroscuro woodcutter is perhaps best illustrated with The Unequal Lovers (after 1533). Attributed to Hans Sebald Beham, it depicts an elderly man who appears to have acquired his young bride on the strength of his financial clout rather than his charm or looks. The subject proved a popular one in German art from the late 15th century.

One of the most impressive pieces in this exhibition, if just for its sheer size and complexity, is Andrea Andreani’s woodcut The Triumphs of Caesar (1599) made after a series of paintings of the same name by Andrea Mantegna. The lively composition is formed of a daunting array of people and animals, including some oddly proportioned elephants faithfully reproduced from the original painting. The finished piece took Andreani seven years to complete and required 40 woodblocks. This example aside, most of the prints in this exhibition are the only colour realisations of drawings by some Renaissance heavyweights. The names of Dürer, Raphael and Titian continually crop up in the abundant accompanying text. Ugo da Carpi’s woodcut Diogenes (c1527), created after that other giant of the Renaissance, Parmigianino, is perhaps one of the finest examples of the chiaroscuro technique. The ancient Greek philosopher is depicted with such depth of tone that his twisting muscles and swathes of cloth take on a sculptural monumentality. The ridiculous and comical presence of a plucked chicken in the background offsets the studious and imposing figure of Diogenes, who likened the wretchedness of man to just such a bird.

Not all woodcuts were destined for folios and frames. Some were made as cheaper alternatives to marquetry, the inlay technique used to decorate furniture. Such images took the form of bold black and brown designs, which were printed on paper and then glued to a range of furnishings, both domestic and ecclesiastical. The glue turned the paper transparent, leaving only the black and brown tones showing against the wood. Dr Gnann tells me that a design by Erasmus Loy, exhibited here, is the only surviving example of such a print in its original format that is unattached to a piece of furniture. Displayed in the same room is Hendrick Goltzius’s Hercules Killing Cacus (1588). The accompanying text tells us that Goltzius was a leading exponent of the chiaroscuro woodcut in the Netherlands. The powerful Hercules is so dextrously rendered that it is easy to forget that you are looking at a print. The whole image looks instead like an energetic pen-and-watercolour drawing.

The curators have helpfully included a video demonstrating the process behind the woodcut, which serves to make the prints in this exhibition seem all the more remarkable. The sombre tones and often classical or religious subject matter may not appeal to everyone, but the importance of such an exhibition should be stressed. It is unusual that two such extensive and complimentary collections, one in a museum, and one private, can be brought together to form such a comprehensive picture of a seldom appreciated Renaissance invention. 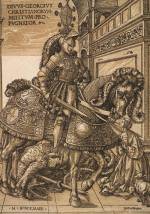 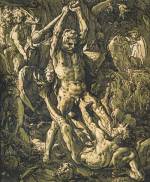 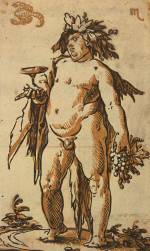 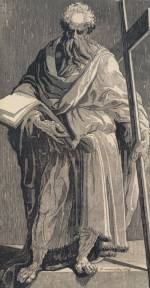