Germany divided: Baselitz and his generation

Germany divided: Baselitz and his generation.  From the Duerckheim Collection

After the war, both in England, but also in Germany, people struggled to re-establish their identities. Many men felt emasculated, and many women wanted to maintain the responsibilities and “freedom” they had acquired during their husbands’ absence at war.

In Germany, this adjustment to a changed situation was coupled with a complex and long drawn out coming to terms with the guilt of the past, or Kriegsbewältigung. In addition, for many, any sense of national identity was lost because of the division of the country into East and West.

In what forms part of a series of exhibitions and a public programme examining Germany, the British Museum is showcasing a comprehensive selection of the early works on paper of six key artistic talents who moved from East to West Germany during the cold war years, in large part to maintain the freedom to make provocative and cutting edge work – Georg Baselitz (b1938), Markus Lüpertz (b1941), Blinky Palermo (1943-77), AR Penck (b1939), Sigmar Polke (1941-2010) and Gerhard Richter (b1932).

The main body of the exhibition focuses on the work of Baselitz, born Hans-Georg Bruno Kern, who changed his name to honour his birthplace, the Saxon village of Deutschbaselitz, in 1961, three years after moving to West Berlin on a student grant at the State Academy for Fine Art. (He had been expelled from the East Berlin Academy of Fine and Applied Art in 1956 on the grounds of “political immaturity”.) Seventeen of his works on display come from the collection of Count Christian Duerckheim, and these, along with another 17 by Baselitz’s contemporaries, have recently been donated by the Count to the British Museum. The rest of the show comprises a further 60 prints and drawings on loan from Duerckheim’s extensive collection of more than 600 sheets.

Some of Baselitz’s early work was produced when he was very much an “angry young man”, at the start of the 60s. Referencing the language of Existentialism, his works were deemed pornographic by the authorities, for their visceral, erotic and angst-filled content. One display cabinet contains Pandemonium Manifesto II, produced with Eugen Schönebeck, a fellow refugee from East Germany, in February 1962. The original had been produced a year earlier to accompany their joint exhibition in Berlin, which contained provocative paintings intended to challenge the “official” abstract art of the west and simultaneously to reject the socialist realism of the communist East. The texts and images combine a sense of nihilism, ecstasy, euphoria and eroticism.

In 1966, Baselitz began to divide or fracture his paintings, often by a horizontal line bisecting the image, as in Divided figure with outstretched arms (1966). This symbolic act reflected his own sense of disconnection, torn between East and West Germany. It also led to suggestions – on top of his lumpy, androgynous and soulless figures of earlier work – of gender ambiguity, as, for example, in Two Stripes (1966), of which it has been proposed that the upper half of the body might be read as female, the lower half as male. From 1969, Baselitz began to invert his imagery, with the intention of making the viewer aware of both the figurative content and abstract marks. This inversion became his trademark, and remains so to this day. Country Road (1969), a simple landscape drawing, is the first work known to involve this feature.

By the mid 70s, Baselitz was achieving an international reputation, and, around this time, he began producing a number of inverted self-portraits, such as Nude with Wing (1975). Elements within this work recall the figures of his earlier Heroes series, such as the outstretched arm and the halo-esque wing of the title, relating the artist to his oeuvre and, more widely, to the German nation at large. To the same end, recurring motifs such as the eagle became a common feature of Baselitz’s paintings from that period.

Lüpertz, best known for his figures in steel helmets, is also a fan of Germanic motifs, openly referencing the history of Nazism and the second world war. His early works, which he called “Dithyrambic” after Greek hymns to Dionysus, god of wine and song, are also exhibited, again showing a flair for abstraction, set quite apart from the realism of the east.

Penck, who was the last of the six artists to leave the East, only ultimately being expelled in 1980, built his reputation on this side of the border largely through his dealers and his clandestine friendship with Baselitz. His childlike stick figures, such as Ohne Titel (‘Untitled’) (1967), became a symbol of contemporary man, in his renewed state of infancy, during the cold war years. Overall, there is something a little lighter, more comic and more dreamlike about Penck’s work than is found in that of his contemporaries.

Polke, whose works also have an entertaining quality at times, might be aligned more with developments in Pop Art, and his sketchbooks contain collages and ink drawings that wouldn’t look out of place alongside Richard Hamilton.

Palermo, whose pseudonym comes from an American boxing manager and gangster, was close friends with Polke and Richter when they were studying in Düsseldorf. His work, the most abstract of them all, and more aligned with developments in the USA, comprises simple screen prints of basic shapes and forms, stretched canvases and painted wood. Sadly, Palermo died young, from a heroin overdose, at the age of 33.

Finally, the Richter section of the exhibition contains a great many sketches in pencil, ballpoint pen and felt tip, alongside his first ever watercolours, made in a hotel room in Davos, Switzerland, on 2 January 1978. Some are studies for full works, others exercises in abstract mark-making, and some are just notes and ideas. A sheet from Atlas (1962-89) comprises 25 colour photographs and, to accompany this, there are enchanting displays of magazine cuttings depicting clouds, lakes and mountains – as inspiring to us now as to him then.

The exhibition is displayed in discrete sections for each artist, much more museum-style than gallery, with no real attempt to contextualise or compare (apart from via the informative wall panels and accompanying texts). As such, a visit is less like looking through a chronological album and more like stumbling on an alphabetised archive. Either way, it offers a valuable insight into the work of six of Germany’s key artistic figures in the 60s and 70s, exploring their East German wartime roots and grappling with their identities as they crossed the border – willingly or otherwise – to begin a new life in the West.

This exhibition forms part of a “Baselitz blitz” in London, with three consecutive shows, the other two being: Georg Baselitz: Farewell Bill at the Gagosian Gallery, from 13 February to 29 March 2014, and Renaissance Impressions: Chiaroscuro Woodcuts from the Collections of Georg Baselitz and the Albertina, Vienna, at the Royal Academy of Arts, from 15 March to 8 June 2014. 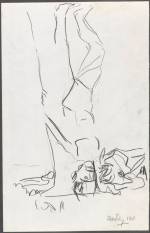 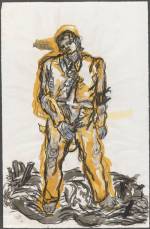 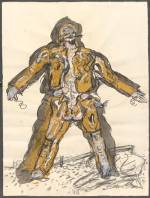 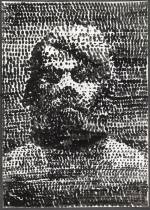 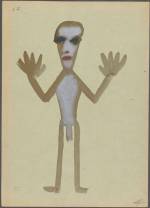 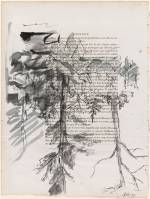 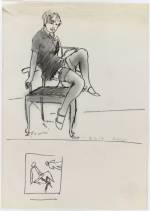 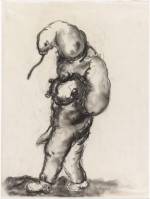 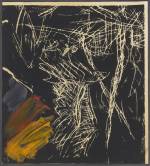 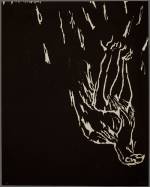