Georg Baselitz: Between Eagles and Pioneers

Georg Baselitz: Between Eagles and Pioneers

In 1963, the conservative German newspaper, Die Welt, was one amongst several to vehemently object to the “scandalous” works of a little known, young artist being displayed in a new gallery, Werner & Katz, on the bourgeois Kurfürstendamm in Berlin. One work in particular, Die große Nacht im Eimer (1962-63), was castigated for portraying “zersetzte menschliche Leiber [...] In sexueller Ekstase befindlich” (“decomposed human bodies in sexual ecstasy”). As a result, this and another painting, were seized by the public prosecutor, and the artist, Georg Baselitz (born Hans-Georg Kern, 1938), was made to stand trial for public indecency.

Nearly 50 years later, in October 2010, the same newspaper invited the now world-renowned Baselitz to collaborate with them on their issue celebrating the 20th anniversary of German reunification, producing new works, which would appear throughout the paper in place of any photography. A radical experiment to celebrate new beginnings and changing attitudes, both national and personal, and perhaps an attempt on the part of the publication to atone for the mistakes of its past?

It appears that the only person not repenting is Baselitz himself. A rebel from the start, now in his early 70s, his recent works keep returning to significant moments of his past, remaking key works, and rendering his references to Communism, Nazism, and other historico-political events ever more emphatic. Yet Baselitz himself denies his works are a historical commentary: “Ich gebe keine Kommentare zur Geschichte, ich bin ein Teil der Geschichte” (“I’m not giving a commentary on history, I am a part of history”).1 Growing up in the East, before fleeing to the West to study and then becoming an international star, he has been described by Cornelius Tittel, Culture Editor of Die Welt, as “der deutscheste aller deutschen Maler” (“the most German of all German painters”).

Baselitz is perhaps best known for his trademarks of inverted images (something he began doing in 1969) and obfuscating drips. Despite admitting that his works are content-heavy, he maintains that they are not intended to be about the depiction of an image, but, rather, the painterly expression itself – the raw medium, as applied to the canvas, be it through broad brushstrokes, scratchy ink-like outlines, built up textures, or the drips themselves, which, through their deliberate act of obscuring, bring the viewer back to focus on the method rather than the product.

His works produced for Die Welt, on display now at White Cube, comprise three sets (accompanied by some smaller watercolour sketches): eagles (hung high, as if soaring in the air), dogs (standing atop inverted peaks, uncannily evocative of roots), and double portraits. They present basic and simplified images, sketchy and fleeting, repeated over and again, from one canvas to the next, with subtle variations – the addition of more colour, a different drip pattern, and different background strokes. By subverting the familiar motifs of the GDR’s Young Pioneers movement (the series of two figures, under the collective title of “Seid Bereit, Immer Bereit” (“Be prepared, Always Prepared”), the movement’s slogan, are posed in the stance of its traditional greeting), the “age-old neutral motif” of the dog, and the overburdened Germanic symbol of the eagle, Baselitz, intentionally or not, reflects the bittersweet feelings of today’s German population, recalling the days of the GDR both with shame and horror, but also a certain “Ostalgie” (nostalgia for the certainties and security provided by the regime). 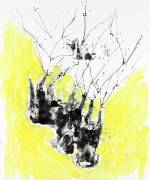 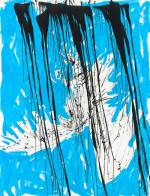 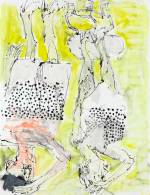