Ancient Wisdom And Modern Knowhow: Learning to Live With Uncertainty

Ancient Wisdom And Modern Knowhow: Learning to Live With Uncertainty

Ancient Wisdom And Modern Knowhow: Learning to Live With Uncertainty by Robert Maxwell. Published by Artifice Books on Architecture, 2013.

This is a magisterial volume by no less than the current leading transatlantic architectural historian and critic. Hopefully not a swansong, but the intellectual distillation of 60 years of thought on the development of architecture; indeed, a consummation for today of evolved ideas. The book explores this manifold saga with a searching series of in depth observations, which, with nine chapters plus a preface by Eric Parry and introduction by Adrian Forty, add up to a major work.

Robert Maxwell is Emeritus Professor of Architecture at Princeton University. He emerges not only as an architect of early distinction, but also a true polymath, an homme de lettres, rare in the architectural world, free of jargon and succinct in phrase. His perspective on developments runs across those 60 years. The subtitle of this compendium is Learning to Live with Uncertainty, though Maxwell, an influential teacher, has never seemingly been plagued by uncertainty himself: he has always been able to think his way through the decades of parenthesis that have characterised British architecture in an already confused, tribalised society.

Of course, Maxwell had emerged as a distinctive modernist by 1950. History is made real by the accidental, and it was fortuitous that at Liverpool University School of Architecture, he overlapped by purest chance with both Colin Rowe and James Stirling. There, the effect of the incumbent conventional disciplinarian
CH Reilly as head of school was duly modified by the guest wartime presence of the Polish School of Architecture, demonstrating a continental form of baroque modernism. Maxwell, Rowe and Stirling had all experienced war service, the latter two becoming casualties. A common bond of thinking joined them. Maxwell even executed the main elevational drawing for Stirling’s student fifth-year final scheme.

This conjunction of three remarkable individuals was to have an inexorable effect on British architecture over the next 50 years. Rowe became the intellectual provider of post-enlightenment wisdom, Stirling the interpreter of this in built-form, Maxwell the incisive navigator. The effect on American architecture was no less formative, with Rowe moving to Texas, with a stint at Cambridge and then to Cornell, and Maxwell going to Princeton. In the meantime, both kept in contact with Stirling, whose Leicester University Engineering building was the first significant symbol of a fusion of modernism with mannerism – even though it wasn’t admitted to be so at the time. Nikolaus Pevsner had to be sharply corrected by Stirling for claiming that the carefully selected red bricks were blue. Stirling missed nothing.

Early chapters of Maxwell’s book focus on the essence of Ancient Wisdom and the classic orders by Claude Perrault. There followed Henri Labrouste, who was early on transfixed by the Doric scale and massive grandeur of the temple of Hera 1 at Paestum. At his November book launch, Maxwell referred to the importance of rhetoric, and this soon figures, a strong overriding principle of his standpoint. Adrian Forty, in his introduction to the book, says this grates with the British, as Mannerism always has. Maxwell substantiates his claim, deriving from an early reading by him at Liverpool of Luisa Becherucci’s Manieristi Toscani (1944), affecting his own thesis design that combined “a stylised front with a prosaic back”. This indeed must have intrigued Rowe, already preparing in l947 his influential The Mathematics of the Ideal Villa, exploring a relationship cast across 350 years or so between Palladio and Le Corbusier.

In 1950 in the Architectural Review, Rowe provocatively advanced his thesis with Mannerism and Modern Architecture, where in a key example he selects the blank panels of Palladio’s Casa Cogallo with that of Le Corbusier’s Villa Schwob (1915) and co-aligns these. Maxwell judicially points out here that, in each case, paintings were intended for these spaces. Stirling followed suit with an article on Le Corbusier’s Ronchamp Chapel, recognising the new tendency. If Stirling had now prepared for an increased mannerism, as at the Leicester Engineering building, in this, Rowe was undoubtedly his mentor. Rowe became the touchstone for a new surge of rhetoric in British architecture, which still runs and runs.

Charles Jencks is credited with promoting “Po-Mo”, as the Architectural Review now called it. Robert Venturi had in 1966 published Complexity and Contradiction in Architecture, a game-changing, seminal work in America. Perhaps Jencks was promoter rather than initiator. When Venturi and Denise Scott Brown built the new extension to London’s National Gallery, Jencks described it as “more Post Office than Postmodern”, but the intellectual genesis of this direction still owed much to Rowe. Stirling’s entry came second in the competition, more rhetorical in content, more streetwise, so possibly posterity will eventually admit it as Jencks’ own preference.

This case study from the l980s is included here because it exemplified the “uncertainty” now ranging across British architecture. Indeed Stirling’s Arthur M Sackler Museum of Asian Art and Archaeology at Harvard University contained an increased range of historical references, to the delight of both Rowe and, indeed, Kenneth Frampton. Maxwell’s argument, accumulated in this book, emphasises the fundamental shift of balance – tectonic plates sliding unpredictably – now affecting architectural thinking in both Europe and America, largely precipitated by the combined activity of Rowe and Maxwell, pedagogically so to speak, and, of course, by Stirling in practice.

In a central section of the book, entitled The Animated Archive (from a paper given at a Colin Rowe Festschrift at Cornell University in 1996, after Rowe had received the RIBA’s Royal Gold Medal for Architecture), Maxwell duly plots complexity and contradiction via two works by Albrecht Dürer (Melancholia 1, and St Jerome in his Study). These etchings were intended as a pair, complementary aspects of the transition from sacred to profane, from that world of “ancient wisdom” to “modern knowhow”. The Archive, as we know it, is animated by the habit of borrowing, and combining anew, fresh combinations of images. The incidence of finding relevant combinations is as much one of accidental chance as of retentive memory. Today, computerised sourcing can accelerate the process, with as yet unforeseen consequences for the integrity of individual thought, ideas and facts; so such as issued from Rowe, and indeed from Maxwell are particularly rare as a resource. One is thankful to find the core knowledge published here by Maxwell, with well-founded illustrations.

In a central chapter, Maxwell switches to Rowe’s own contribution again, expounding on Rowe’s own revisions to theory with dramatic effect. In the first instance, it was Stirling who most readily absorbed into his design work Rowe’s postulations, so gently administered: via written articles, but also through his regular critique and discussion, over the board or in favourite restaurants, or seated in the Hope chairs that Rowe approved and Stirling duly acquired. In a further survey, Maxwell identifies those architects who came after, including Peter Eisenman, Coop Himmelbau and Rem Koolhaas.

Peter and Alison Smithson, so much a part of the evolving scene of the 1970s and 80s are seen sadly by Maxwell as something of a tragedy, from the high note of the Economist building in the 60s to the low pitch of the failed Robin Hood Gardens housing in east London, now threatened with demolition.

Daniel Libeskind’s masterly Jewish Museum, Berlin, and the expressionist, globally spread tendency of Zaha Hadid are deployed by Maxwell to bring us up to date. We cannot surmise the reaction here that would have come from Stirling and Rowe, but Maxwell recognises the new context, himself now the sole survivor of this triumvirate of talent, without caution but with reservations. More and more it emerges from the book that a continuous thread of their architectural collateral underpins the text as a whole. This brings the reader, academic, architect or student, into clear and navigable seas in this 21st century morass. 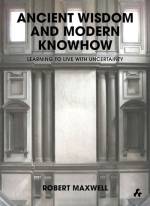