An Exhibition of Event Photography

An Exhibition of Event Photography

For anyone interested in the ways in which a photograph can aspire to the condition of a work of art, there is an exhibition which opened on 8 December 2007 which is unmissable.

The exhibition will end on 2 March 2008. It is presented on two floors of the Museum Kunst Palast in Dusseldorf, located close to the Dusseldorf Kunstakademie and the Dusseldorf Kunsthalle within sight of the River Rhine. In the 1960s and 1970s, the Akademie and the Kunsthalle represented the heart and centre of a European art world which caused Dusseldorf to be a fitting rival to New York as the world capital of contemporary visual art. Certainly, the spirit of Fluxus was then nourished in Dusseldorf and in the surrounding region of North Rhine-Westphalia centred on the conurbation which linked Dusseldorf to Cologne, Krefeld, Moenchengladbach, Wuppertal, Duisberg and Bonn as the nodal point of the German post-war economic miracle.

The exhibition at the Museum Kunst Palast acknowledges the importance of that historic time. The exhibition's German title is 'Fotos Schrieben Kunstgeschichte'. The English translation chosen by the Museum is 'Written by the Photographs: Art History', together with a subtitle which is more specific: 'Archive of Artistic Photography of the Rhineland's Art Scene'.

This archive was established in 2003 with generous support from the art fund Kunstiftung Nordrhein Westfalen.

From the very beginning of the initiative which established this unique archive, the work of three artists was considered of prime importance. These artists were Benjamin Katz, Erika Kiffl and Manfred Leve. Their use of photography had caused art historians, critics and curators to come to the conclusion that the photographs they took represented a new genre of 20th century art which could be termed 'Event Photography'.

Manfred Leve personifies such an art form with his photographs of early 'Fluxus Happenings'. His work as an event photographer is well defined in the catalogue published in 2004 in relation to an exhibition of his photographs from 1957 to 2003. The exhibition was aptly entitled 'I don't make photographs, I take photographs'. It is noteworthy that the photograph on the catalogue's front cover is one of an historic series taken by Manfred Leve of Blinky Palermo in 1968. It should also be noted that, coinciding with the exhibition 'Fotos Schreiben Kunstgeschichte', there is an exquisitely beautiful exhibition celebrating the career of Blinky Palermo, beginning when he was the favourite student of Joseph Beuys at the Dusseldorf Kunstakademie and ending with his tragic death at the age of 33. It is an exhibition which has transformed all the gallery spaces available in the building housing the Dusseldorf Kunsthalle and Kunstverein, so that the exhibition and the architectural structure of the building are regarded as integral to each other.

Benjamin Katz focuses his camera on his artist friends at work, at the installations of their exhibitions, and in periods of what can be seen as 're-creative intervals' between work. Erika Kiffl concentrates on the presence of artists identified with particular spaces, either in the act of mounting exhibitions or in their studios, showing their art-making in progress, or in their meetings with museum and gallery directors, critics and fellow artists.

The exhibition is blessed with a handsome 408-page catalogue with an introductory essay by Stephan von Wiese, who has, for the past five years, devoted himself to a self-appointed daunting task. The full extent of his achievement is revealed for the first time in the exhibition, providing much food for thought for those art experts concerned with the true spirit of avant-gardism in art rising from the improbable setting of utter devastation in the aftermath of World War II.

This introduction is illustrated by the now iconic photographs which Charles Wilp took on 9 March 1960 of the historic artistic event which Yves Klein entitled 'Anthropometry of the Blue Period'. This took place in Paris at Pierre Restany's Galerie International d'Art Contemporain. It introduced 'performance art' in no uncertain manner to the cultural life of post-war Europe. It was also the visual expression of Pierre Restany's 'First Manifesto' defending 'New Realism', expressed in the art of Yves Klein and artists such as Jean Tinguely, Raymond Hains, Daniel Spoerri and Arman.

The exhibition is arranged in sections, beginning in the 1950s and leading to the first decade of the 21st century. The first section deals with the activities from 1957 to 1960 of artists who found much needed patronage in the world created by Jean-Pierre Wilhelm in his Galerie 22. This whole section reveals the profound commitment and insight developed by Manfred Leve which enabled him to create perfect examples of 'event photography' relating Jean-Pierre Wilhelm to his fellow gallery director, Alfred Schmela, and to artists such as Jean Fautrier, Nam June Paik, Manfred de la Motte, Charlotte Moorman and the Group Zero artists, Otto Piene, Heinz Mack and Gunther Uecker.

It could be said that all of them were rightful heirs to the legacy of Dada artists. It was significant that John Latham, Britain's foremost avant-gardist artist, was attracted at that time to Dusseldorf, as was, of course, Yves Klien.

Sections Two, Three and Four are focused on the interface between the visual and performing arts, emphasising the importance of contributions made by John Cage, Nam June Paik, Charlotte Moorman, David Tudor, Merce Cunningham, Robert Morris and Yvonne Rainer.

This section makes reference to the historic 'happening' on 5 June 1965 entitled '24 Stunden' at Rolf Jarling's Galerie Parnass in Wuppertal. This brought together Joseph Beuys, Bason Brock, Ute Klophaus, Charlotte Moorman, Wolf Vostell, Tomas Schmit and Eckhart Rahn. The pocket-sized catalogue was an artwork in itself. I was fortunate to acquire a copy of this on its publication; I regard it as one of the most important art works in the Demarco Archives.

In 1967, leading artists of the Fluxus movement were attracted to the Dusseldorf Kunstakademie to participate in the event 'Festival Fluxorum Fluxus', enabling Joseph Beuys, George Brecht and George Macunias to work in fruitful collaboration.

Another section devoted to Group Zero from 1960 to 1973 included strong references to the exhibition 'Strategy: Get Arts' presented under the aegis of the 1970 Edinburgh Festival by the Richard Demarco Gallery in collaboration with the Dusseldorf Kunsthalle with extraordinary photographs by Monika Baungartl relating to the site-specific art works made for the exhibition by Klaus Rinke, Stefan Wewerka, Ferdinand Kriwet, Gunther Uecker, Joseph Beuys and Henning Christiansen.

This section is closely related to the sections considering the importance of Joseph Beuys as Professor of Sculpture at the Dusseldorf Kunstakademie from 1961 to 1972. These in turn relate to the 'actions' Beuys made from 1965 to 1974 in the Galerie Schmela and at the Moenchengladbach Museum. These actions are in direct relation to the Beuys 'action' at Edinburgh College of Art made in collaboration with Henning Christiansen, entitled 'Celtic Kinloch Rannoch: The Scottish Symphony', which was photographed by Ute Klophaus. This was the first 'action' Beuys made in Britain and through it he declared his personal commitment to the cultural heritage of Celtic Europe.

Each of the eighteen sections inevitably brings the development of event photography completely up to date with Benjamin Katz's images of Lawrence Weiner and Giovani Anselmo (1989) and Mario Merz (1992) and the images taken by Manfred Leve of the studio of Gerhard Richter (2006) and of the studio of Felix Droese (2007).

Among the most historically significant of Erika Kiffl's photographs are those of Polish artists - Miroslaw Balka, Leon Tarasevic, Isolde Wawrin and Joanna Przybyla - in the act of installing their work in the Museum Kunst Palast, as their contribution to the exhibition 'Dialogue - Austellung-Warschau-Dusseldorf'. This was a milestone in the political and cultural dialogue which helped heal the wounds of war suffered to an extreme degree by both Poland and Germany.

In recent years, the collection of 'event photography' has been considerably enlarged to become an important academic resource of worldwide significance. It has certainly helped considerably to establish the importance of North Rhine-Westphalia as a key region where the art world of Germany, and indeed the whole of Europe, could be seen to regain its pre-war strength of purpose.

The exhibition catalogue contains a number of insightful texts, particularly those of Renate Buschmann, Antje von Graevenitz, Jurgen Harten, Susanne Rennert, Klaus Rinke, Anne Rodler, Anda Rottenberg, Armin Zweite and, of course, Stephan von Wiese, who, as exhibition curator, has lived to see his dream of such an exhibition fully realised with what he himself acknowledges as the invaluable support of his colleagues, particularly the exhibition's co-curator, Renate Buschmann, and Beat Wismer as Director General of the Museum Kunst Palast.

The exhibition should, of course, be transported to Britain, and what better location could there be for it to be shown to best advantage than that provided by Edinburgh College of Art as the ideal home of 'Strategy: Get Arts'? Andre Thomkins was responsible for the palindromic title of the exhibition which must be seen clearly as the first to introduce, beyond the frontiers of West Germany, the dynamic force of what now must be acknowledged as the rebirth of European avant-gardism, located around the confluence of the Rhine and the Ruhr, the North Rhine-Westphalian heartland. 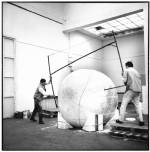