The message of Yoko Ono’s art has always been world peace. In her performances, installations and books, she invites the audience’s active involvement to make them understand her art not only on an intellectual, but also a visceral level

In 1971, Yoko Ono had an unofficial solo show entitled Museum of Modern (F)art at the Museum of Modern Art in New York. Even though the artist advertised the exhibition in the Village Voice and the New York Times, few people knew about it – least of all the museum’s administrators. People who came for the opening had trouble finding Ono’s work. As the visitors came back out of the building, a reporter spoke to them, explaining that Ono had released a swarm of flies into the air from the museum’s garden, and that this constituted a kind of “conceptual” art that the visitors could contemplate. The reporter was accompanied by a cameraman, who filmed their responses. The reaction of the art-going public to the exhibition/performance varied. Some were puzzled, finding a type of art that was literally “in the air” difficult to understand; some were indignant at being tricked by the artist; yet others claimed to like it. They must have understood that the performance conceived by Ono was not measured in the dimensions of space or, in fact, any of the material aspects traditionally associated with art – money, prestige, or extensive curatorial entourage. The performance existed not only in the act, but also in the reactions to the event, which, in this case, were purely verbal, “conceptual”.

Now, almost half a century after her defiant “(f)art” show, an official exhibition at MoMA, Yoko Ono: One Woman Show, 1960-1971, looks at the work in the decade leading up to that original performance, and includes a video of the interviews with visitors from 1971. At the press conference for the exhibition, Glenn Lowry, MoMA’s director, apologised to Ono for not being “prescient” enough in 1971 to organise a one-woman exhibition of her work. Now the “mistake” is corrected.

The explicit reason for this timely correction was the 2008 Fluxus Collection Gift made to MoMA by collectors Gilbert and Lila Silverman, which made the museum curators realise the tremendous role played by Ono in the Fluxus movement. One Woman Show, curated by Christophe Cherix, chief curator of drawings and prints, and Klaus Biesenbach, chief curator at large, includes about 125 objects, installations, films and audio recordings, as well as a wealth of rare archival materials, such as the artist’s editions of books, photographs and programmes of her early performances. It includes such influential works as Touch Poem #5 (c1960), Painting to Be Stepped On (1961), Bag Piece (1964) and Cut Piece (1965). The exhibition makes clear that by the time Yoko met John Lennon in November 1966, she had already established herself as one of the premier figures in Fluxus, and that the powerful presence of a pop icon in her life had a two-pronged effect: on the one hand, it made her more visible as a person because their union transformed her instantaneously into a cultural icon on her own right, while, on the other, it obscured for a while her own work as an artist.

The exhibition also brings to the fore the paramount importance of time as the pivot of the artist’s oeuvre. In virtually all of Ono’s works, the dimension of time is made palpable, while that of space is subdued or minimised. In fact, from the very beginning, time-based arts such as music and performance were an integral part of her work. The earliest work in the exhibition, Lighting Piece, demands that the viewer/participant “light a match and watch it till it goes out”. Ono made it in 1955, while still a student at Sarah Lawrence College in Yonkers near New York.

After marrying her first husband, a Japanese composer named Toshi Ichiyanagi, and moving to New York the following year, Ono formed close ties with leading avant-garde figures on the New York scene, many of them musicians, such as John Cage and La Monte Young, as well as artists, such as George Maciunas, and began showing her work first in her Chambers Street Loft and then in Maciunas’s AG Gallery, Carnegie Hall and other locations in the city. Her work demanded not only the viewers’ time, but also their active involvement. Grapefruit, a book that came out in 1964, for example, consists of 150 instructions to either do things or imagine doing them. The tasks seem quite easy at first glance, but are impractical and whimsical, and therefore feel strange and uncomfortable. For example, in the Mask Piece for John Cage, made in the spring of 1964, Ono tells the reader to: “Wear a blank mask/ask people to put in wrinkles, dimples/eyes, mouth, etc as you go.” Shadow Piece (1963) tells readers to: “Put our shadows together until they become one.” Painting to See the Skies (1961), one of several instructions for painting, extols us to: “Drill two holes into a canvas. Hang it where you can see the skies.” It is up to us to follow these instructions, of course, but even if we choose not to act on them, at least we are made to take time to consider an action.

Ono’s multiple performance pieces and films on view at the exhibition also demand either our time or participation. There is an entire room – empty unless people enter it – dedicated to visitors touching each other. Another striking work is an excruciatingly emotional film of Ono performing Cut Piecein 1965. It is mesmerising in its slow and deliberate flow, which allows us to closely observe random audience members meticulously disrobing the artist. The most striking part is perhaps not the multiple acts of violation of her privacy masterminded and staged by herself, but rather Ono’s obvious discomfort and her efforts to conceal it. Several films from the mid-60s, such as Eyeblink, a 36-second sequence of a closeup of the artist’s eye, or Fly, a 25-minute-long view of a fly’s journey over a naked female body, make us slow down our busy pace and pay attention to details that we normally pass by as unimportant.

In 1971, on the occasion of her Museum of Modern F(art) exhibition, Ono wrote “Seven Texts”.1 Four of them were on “ownership”. Each of the ownership texts was a short story or a set of instructions educating the reader on the traps and perils of owning material riches. These texts were followed by a short poem, On Sky, informing us that, “In actual fact … the sky starts under your feet. / It won’t be too much of a problem for you to fly …” A set of instructions, How to Fly, guided the reader first to: “Make sure that your mind is not clogged with heavy burdens such as resentment, anger, secrets and the past.” Then, to “Make sure that your wings are light and free” as well as the “wings” of people around them, because “you are part of the world”. “Just like your body, all it [the world] needs is to be unclogged and have good circulation. Circulation is the secret to freedom and the key to fly.” To people familiar with Ono’s biography, these words reveal the source of energy behind her life and her art. As a child growing up in war-torn Japan, she had known first-hand, destruction, hardship and hunger brought to her country by the American bombardments. Having come to the US with her family, she chose the path of forgiveness and reconciliation. Never forgetting, but forgiving is the message of Ono’s art. At the press conference for the exhibition, she wrote a statement, the message of which was world peace. She never tires of preaching the words of peace – it is her life’s mission. 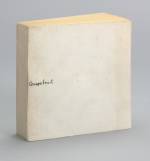 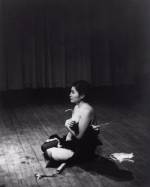 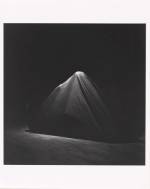 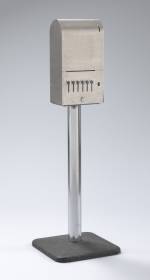 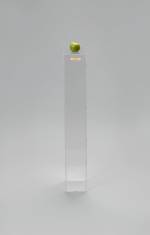 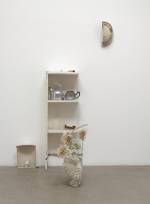 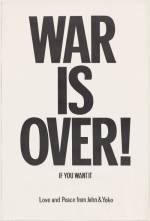 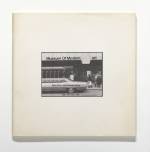