Yoko Ono: To the Light

Yoko Ono: To the Light

The Serpentine Gallery’s Yoko Ono: To the Light is the artist’s first London-based retrospective in over a decade. A hugely influential early conceptual artist and Fluxus group member, Ono was among the pioneers of the 1960s’ artistic commitment to participation, ephemerality, and the everyday. Her output exhibited at the Serpentine spans virtually every medium including film, sculpture, installation, photography, painting, performance and poetry. Known by too many for her partnership with John Lennon alone, this exhibition makes the case for the seriousness and thought-provoking nature of her art.

To the Light’s presentation is thematic, drawing out the formal, conceptual, and political themes that span Ono’s output. This focus – rather than a chronological one – seems apt given her proclivity to revisit performance-based or site-specific works in new environments. Many pieces are double-dated, testifying to her interest in repetition and variation; a strict progression of discrete periods does not apply.

No interpretive texts are included, removing Ono’s work from its art-historical context. This is surprising in an exhibition that claims to “reflect upon the enormous impact that Yoko Ono has made on contemporary art”.1 For a non-specialist, assessing her influence on other artists on the basis of To the Light will be impossible. But a different and beneficial form of engagement arises from ensuring that the propositions and suggestions advanced within Ono’s own work are not diluted by the gallery’s interpretive apparatus. In an industry sometimes prone to curatorial aggrandisement, this choice feels refreshing, and Ono’s work stands solidly on its own.

Its frequently activist stance also imparts a potent sense of recent history. In the opening room three large and roughly identical piles of dirt titled Country A, Country B, and Country C constitute Three Mounds (1999/2012). Upturned soldiers’ helmets from the two great wars float midair, suspended by fishing wire, and contain small blue-sky-coloured puzzle pieces signed “y.o.”. Visitors may take the pieces, which Ono hopes eventually to reunite into a puzzle. The poster WAR IS OVER (if you want it) (1969/2012), now tattered, dirtied, and burned at the edges, is an emblem of her career-long devotion to peace. A sound recording titled Hawk/Cambodia (2012) plays a tropical bird’s warning call on a short loop, a strangely urgent soundtrack to sixties videos showing an eye blink and a match burning in ultra-slow motion.

Across the exhibition, Ono’s “instruction pieces” establish the terms of her relationship with the audience. Imperative sentences arranged like haikus upon framed paper, these works lay out physical projects or thought experiments for the audience to complete anywhere and anytime. Exhibited first in 1962 and continually refreshed, To the Light presents a new series titled Footsteps and Rooms (2012). Mimicking the structure of Zen master-student dialogues, they offer both straightforward tasks: “Walk through the museum with a map of the rooms/ Rubber stamp the map with where your feet carried you/ Send the map of your footsteps to a friend” (FOOTSTEPS I, 2012) and the playful paradox of koans. Rooted in Ono’s studies of phenomenology and existentialism while the first female student of philosophy at Japan’s Gakushuin University, they establish her art as an attempt to translate imaginary thought into concrete reality.

What To The Light makes unequivocally clear is precisely what sort of mental attitude Ono champions. Whereas activists today frequently describe themselves as motivated by anger, rage even, at injustice, Ono’s activism is consistently driven by joy, laughter, hope, and faith in small gestures. Because there is indeed much to feel angry over, critics have often found her approach naïve, precious, or childlike. But this exhibition manages to inspire, perhaps through the accumulated force of her decades-long dedication to cultivating the better aspects of humanity. In a contemporary art world where biting critique, irony, and deconstruction are so often invoked to bring about positive change, Ono’s approach presents a marked contrast.

Across the show, Ono’s idiosyncratic symbolic system takes shape, making every piece feel like part of one giant work. The colour white, glass and mirrors all represent purity of thought. Blue sky is a metaphor for human transcendence, and the room is a landscape against which to defy Cartesian boundaries and expand consciousness. A new instruction written for the show reads:

Open the ceiling, windows and walls.
Mirror everything in the room.
Let the mirrors reflect the sky.

Sky TV (1966/2000) is a small white room featuring a closed-circuit colour television that displays the sky outside. Hand-written phrases scattered along the walls in a wavering line form the piece A Blue Room Event (1966), reading in one part: “This room slowly evaporates every day. This room moves at the same speed as the clouds.”

The airiness of Ono’s propositions gives way to more documentary, consciousness-raising content upon addressing patriarchy. In every Cut Piece performance, audience members each snip off a scrap of Ono’s clothing. A 1965 video shows Ono sitting stoically upon a stage while bohemian youth self-consciously undress her, until a young man deliberately cuts her bra straps. Opposite, Cut Piece (1964/2003) records a more respectful audience, their motions and demeanour almost ritualised. Many whisper something to Ono and elicit a smile. These performances show how quickly and comfortably people violate their morality if provided the sanction of an artist-audience pact, and visualise the fragmentation of the female person. Seen together, they also evince the development of Ono’s career and public persona.

Ono is an obvious choice for Olympic programming: the internationalism of her art and activism shares affinities with the Olympic ideal of global conviviality. Ono’s new work #smilesfilm, a large-scale participatory project gathering an anthology of photographs showing individuals smiling, is displayed with a photo booth to receive contributions.

It’s a project that John Lennon would have loved. His presence – both literally as a protagonist in certain art works and figuratively via Ono’s general preoccupations – can be felt throughout the exhibition. The video Two Virgins (1968) shows John and Yoko embrace in slow motion against a marvellously sunlit blue sky, their body language effortlessly conveying an almost beatifically genuine romance. In various pieces, their love is offered up as a model of ideal human interaction and part of the driving force behind Ono’s energies. To the Light is immensely successful in that Lennon’s presence does not take away from Ono’s work or diminish her authorial status. He is part of the story, just not in the way it is usually told. 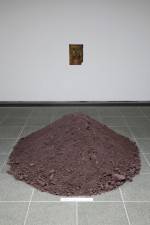 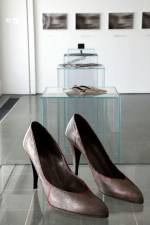 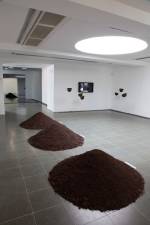