At Frieze Art Fair, Saskia Sassen spoke compellingly about how artists can find potential in underused urban spaces, working to give such places a value that goes beyond the concrete terms of real estate. 'China Power Station: Part 1' echoed the strategy of exhibiting in vacant industrial spaces by taking over Battersea Power Station in October 2006, making this abandoned yet spectacular site accessible to curious visitors for the first time in decades. The huge crowds that came to the exhibition, the Serpentine Gallery's first off-site project, were drawn by the venue as much as the artwork and were testament to the enduring appeal of Sir Giles Gilbert Scott's iconic building.

Begun in 1929 and finally completed in its current form in 1955, the colossal power station was designed to provide 20% of London's electricity, but its functional life was short and it closed down in the early 1980s. Since then it has passed through various hands, standing empty and unused while developers struggle to find a profitable use for its massive capacity. Scott's sister power station at Bankside has found better fortune, becoming the home of Tate Modern.

For 'China Power Station: Part 1', two of the artists took the imposing site as the starting point for new work: Ma Qingyun provided visitors with bicycles to explore the wasteland around the power station's empty shell, while Yung Ho Chang's viewing machines framed elements of the building for a more static form of architectural contemplation. Sadly, the decrepitude of the power station's structure had a significant impact on the exhibition displays inside the building, as health and safety regulations limited the number of visitors allowed in each room and affected the positioning of certain pieces. In spite of these restrictions, however, a number of works stood out.

Fitting with its obsolete industrial setting, Cao Fei's engaging video piece 'Whose Utopia' (2006) explored the status of the individual in the factory production line. A commission for the Siemens Arts Programme, this triptych of films was the result of a collaboration between the artist and production line workers from the OSRAM light bulb factory in Foshan in Guangdong province. The first film shows the mechanised choreography that keeps the factory moving in a seemingly endless pattern as light bulbs roll, twist and jiggle along the different conveyor belts and glow in a rhythmic pattern as each one is separately tested. In the second part, this pattern is interrupted by individual members of staff dancing around the factory floor, leaving their posts and effectively breaking the rules and the rhythm of their daily work. The final instalment is composed of portraits of staff standing still in their different positions, offices and departments, pausing in their work to be recorded as distinct faces within a larger group.

Zhang Pei Li's 'Happiness' (2006) looked at a different kind of group: the crowd. The film splices together repeated shots of rapturous applause from a crowd with the declarations of a single character whose precise identity, whether movie hero or political leader, is difficult to discern. The film is an endless loop of call and response with the applause becoming maddening and utterly meaningless. Liang Wei's single shot piece, 'Blue' (2006), provided a counterpoint to this mechanistic crowd by showing a clutch of passers-by being drawn together round an object just out of shot. As they nudge one another, make comments and jostle to get a better view their curiosity gives rise to an active and collaborative process of looking.

In 'The Music Hall of Zheng Daoxing' (2002-04), Xu Tan presents the unique personal history of one individual in the form of a song. Having interviewed Zheng Daoxing, a retired transportation worker who has turned his hand to making instruments, Tan wrote a lengthy ballad which Daoxing performs on film accompanying himself on his own hand-made guitar.

Finally, on the top floor of the exhibition space, Gu Dexin had built a wall of apples with the assistance of the nearby New Covent Garden Market. Notable among the selection of mostly screen-based work, his installation, '2006-10-7' (2006), decomposed throughout the duration of the show, filling the room with a sweet, fetid odour.

Negotiating with the Parkview development company and securing Battersea power station as the venue was a brilliant coup for the Serpentine and the large visitor numbers and long queues were evidence of people's fascination with the building. However, rather than heralding a new chapter in the power station's history, as the architectural models which accompanied 'China Power Station: Part 1' promised, the exhibition was swiftly followed by yet another delay in the redevelopment process; Parkview sold the land and building to another developer, apparently netting £390 million in the process.1 As 'China Power Station' moves onwards and upwards with parts two and three planned for Norway in the autumn of 2007 and China in 2008, Battersea power station finds itself in limbo once again, abandoned and inaccessible in spite of the evident admiration that the building inspires. 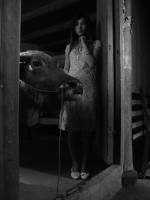