Michelangelo Pistoletto: The Mirror of Judgment

Michelangelo Pistoletto: The Mirror of Judgment

Michelangelo Pistoletto (b Biella, Piedmont, Italy 1933) was a key figure in the development of conceptual art and a founder of the important and influential arte povera movement. From early childhood however he grew up in Turin. Remarkably, this Serpentine Gallery exhibition is the first public exhibition of his work in Britain since 1999, although he had in the period from 1966 over 20 international exhibitions in Europe, Asia, and the USA. In 1999 he exhibited at the Museum of Modern Art, Oxford. This was the first time anywhere in Britain.

In July 1970 Studio International organised within a special section of 48 pages of the journal, and under the aegis of Charles Harrison, a most original showing of the work of 37 artists divided into six varying groups, by six critics, including Harrison and Lucy Lippard. Germano Celant’s arte povera “poor art” movement was already under way by then, although the title was not deployed on this occasion. Instead, amongst Celant’s selection of eight artists (one page each), including among others notably Alghiero Boetti, Mario Merz ,and Giuseppe Penone, was exhibited as the page signed by Pistoletto.

In fact this was a graphic replication in line of a previous Studio International cover, that of October 1966 (a sculpture by William Turnbull, 3,4,5 (1966), steel, painted red and orange). Pistoletto did a “bounce-back” for us. Was this meant as a compliment, or a kind of wry parody, or both?1

The organisers at the gallery have supplied a very informative interview with the artist. Here also Celant has supplied for the exhibition catalogue at the Serpentine a new, very comprehensive essay in reappraisal of Pistoletto: as a key mentor himself of arte povera, this is a welcome item. Pistoletto has always been a polemical artist, and although undemonstrative as an individual he has since the 1960s always been a key social and intellectual organiser in the movement. In 1998 this was aptly fulfilled by his establishment outside Turin of Città dell’arte, a working Trust foundation set up by him. Here the creative spirit of arte povera and indeed generally of conceptual art internationally (Beuys and Long were renowned here) was sustained and disseminated perhaps for posterity. Various multi-disciplinary groups of artists were fostered by Città dell’arte and artists’ residences set up. At the 2003 Venice Biennale a pan-Mediterranean community scheme was established by Pistoletto.

That year at the Venice Biennale Pistoletto was awarded the Golden Lion for Lifetime Achievement, a highly appropriate recognition of the continuity and development of the artist’s ideas for contemporary art and society using art to generate social change.

This Serpentine exhibition in 2011 comes as an important marker for Pistoletto, carrying both retrospective and prospective components. It is also particularly complementary, whether by coincidence or not, that it runs concurrently with Peter Zumthor’s adjacent Pavilion, containing the “hortus conclusus”, the secret garden within a mysterious enclosure, embodying the idea of contemplation of nature. It forms an exemplary realisation of Pistoletto’s own interpretation of the meaning of Paradise, developed here eventually after first and second paradises, into “The Third Paradise”, symbolised here in the Serpentine Gallery’s North Gallery. Pistoletto says:

“paradise means garden, from the old Persian word that means ‘protected garden’. But now our entire planet is a garden that could be destroyed if we don’t preserve the very fragile atmosphere that surrounds it and protects it from the cosmic void.”

His First Paradise (the one of nature such as created by Zumthor here) was one in which humans were totally integrated, could cultivate the surrounding land, but enjoy also the protected garden. The Second Paradise started when humanity became independent from nature and produced the artificial world in which we live today. So the Third Paradise is the integration of the natural paradise with the artificial paradise. One might here comment that the contemporaneous wide enthusiasm for “Prairie Gardens” reflects this human quest, a return to nature.2 Pistoletto here confirms that “the Third Paradise is conceived as a Hortus Conclusus, (coincidentally referencing en route that of Zumthor in the adjacent Pavilion he has created) the one where we all live”. And he concludes, “the future for me is not about the possession of the world, but about making love with the world – it’s our partner. But if we make love with the world, we have to love humanity. If you love humanity, you love yourself.”3

Germano Celant says of the exhibition: “If the mirror reflects the firmament in which all reality is reflected the construction in London” of a ‘temple’ of iconography, which I will call the “Serpentine Temple” is the firmament of society’s reflections on the spiritual world. It is the attempt to visualise the projection of the human being in relation to the cosmic unknown; to express all the possible connections between fixedness and the passing of time. In fact it is the definition of a territory where the human moves within the labyrinth, as before a mirror …”. He defines this Serpentine Temple created by Pistoletto accordingly, as “an architectural structure in which human potential is nourished by the transformation of the individual, in a kind of rite of passage through the cardboard labyrinth, leading to a growing self-awareness”.

Entering the labyrinth, a landscape of sinuous, curving corrugated cardboard, the visitor experiences en route specific episodes, some of an iconic religious nature (relating to the four religions which only worship a single god), some symbolic and mirror-bound. Here Pistoletto introduces along the way his Mirrored Well (1966), plus some of his Trombe “Horns” also from the 1960s, together with four Mirrors of Judgment (2011), all aspects of the Temple. One is reminded of his arte povera colleague, Alighiera Boetti’s Mercator projection of the world, Mappa (World Map) (1971–73), which indicates just such an idea of universality, of reaching out to find the real axis of the world. Here the visitor initially is confused, but on eventually emerging from the maze finds self-awareness greatly enhanced. This journey has to be experienced directly to be fully understood and realised. Typically events in an earlier Pistoletto work (Zoo) spilled out into the streets and piazzas; he claims that his use in his work of mirrors stimulates the activity of social participation, mobilising the audience into further action. This remarkable, curving maze, typically povera “poor” in its low-cost corrugated cardboard material one metre or so high, (so heads can look over) wends its way, twisting and turning but always upright, via this episodic partly mirrored route, to its final conclusion. Perhaps there is an element of the fairground ghost train too: its good to have company there. Here is a social message, ritualistic and self-referential. No wonder most visitors are smiling quietly when they emerge.

It can be seen in retrospect that arte povera always maintained something of an anti-modernist stance (even referring back to the work of de Chirico), and indeed developed a firmly anti-consumerist standpoint in contrast to Pop Art and even to Minimalism, hence the socio-political counterpoint of the movement. At the same time, as Pistoletto demonstrates today, there is a continuity of simplicity (and poverty) of materials used as here. An absolute fundamentalism in the selection of low-cost materials was not in opposition, for instance, to the choice in 1970 by Boetti for his Mappe Mundi series, in a seemingly artisanal craft-related decision to have the series woven anonymously in Afghanistan in the early 1970s (where Boetti had lived at times). Implicit was a rejection, as by Pistoletto, of the post-industrial world. As Pistoletto shows, the underlying principles of arte povera can be said to be as relevant today, especially given the current social and economic global crises, as ever. An urgent sense of humanity, and love of humanity, becomes paramount however, in this exhibition now, more than ever. Thus, Pistoletto’s focus on the visitor’s self-discovery as key.

The Serpentine Gallery have to be congratulated on this timely exhibition, which hopefully consolidates in Britain, following elsewhere the high repute, the quality of Pistoletto’s work, and in good time at last. 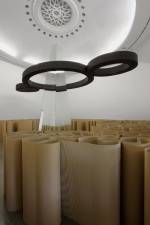 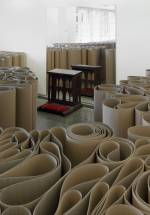 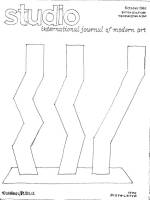 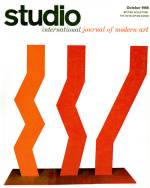