In this major retrospective at the Serpentine Gallery, the works of Reiner Ruthenbeck – in particular, his overturned furniture – have raised that old question, But is it art? Happily, the answer is yes.

Having studied photography and sculpture in his native Germany – the latter under the guidance of famed Fluxus artist Joseph Beuys at Düsseldorf Academy of Art – Reiner Ruthenbeck (b1937) produces collections of what are, essentially, simple sculptures, images and everyday objects. A chair, a pile of paper, a suitcase, a light bulb; any viewer should be able to accept these items as tangible and inanimate, but more often than not this is not possible. Beneath the guise of simplicity that characterises the majority of Ruthenbeck’s oeuvre is a concealed net of complexity, one that can capture and consume entire galleries and all those who stand within.

Enter the opening room of the Serpentine Gallery, London, for example, the home of Ruthenbeck’s first major retrospective in a British public gallery to date, and you will find three heaps of ash on the floor, each pierced by a different form of metal. On the three surrounding walls of the room sit three shapes – Black/White Double Ring 100, White Fabric with Metal Square 150, Triangle with Dashed Baseline 100/05 – circle, square, triangle. This is not a complicated space: the physical makeup of each work is well within the realms of comprehension. The effect produced, however, is far more complex. Through the juxtapositions of colour and material, one experiences a renewal of awareness. Several pre-existing yet unnoticed factors come to light: the immensity of the whitewash that is interrupted by the delicately formed triangle, the heavy-handed nature of the architecture that is mocked by the circular twining of ribbon, the contrived cleanliness of the floors as they are piled with ash. Ruthenbeck’s works do not stand within the gallery as temporary additions, but grow to incorporate each corner of the space itself.

Lighting Attempt (2004), a series of five spotlights fixed on a painted black square, and Suitcase (1968), a collaborative sound piece that loops a recording of Fluxus musician Henning Christiansen, leads the viewer towards the obscure West Gallery. It is a space shared by an assortment of free-standing and free-hanging constructions: the Furniture works – a series of three freestanding iron cages  – Suspension V (1969-70), a hanging material cradle holding a square pane of glass, and Laminated Box (1968) are flanked by two wall-mounted works from post-1985 and Double Ladder (1967), two ladders that stand erect via the support of one another.

There is an evident continuity within the room, the direct result of both a consistent angular design and a particular shade of dark red, thin fabric strips of which are draped on almost every sculpture. These interrelations are important, for this is no longer a collection of individual works but a small community; a collective in which each object relies on, and is simultaneously relied on by, the next. The shapes stand frozen, silent and united while the viewer becomes the intruder, painfully stumbling in a desperate attempt to be included. Again, while initially intriguing, these constructions are of very simple design. Despite this simplicity, they somehow encompass the whole room, producing a calm yet threatening ambience that actually repositions the focus on the viewer, the moving figure, the rückenfigur, the extraneous odd one out.

Within the North Gallery is the conceptual light installation Twilight/Between Dog and Wolf (1977). The work features a single, dim light bulb hung in the centre of a large circular room, the effect of which is reminiscent of twilight, the transitional moment when “one can barely distinguish between a dog and wolf”. On entering the chamber, you become utterly removed, enveloped, a lone subject beneath a dim spotlight. Careless conversations between the gallery’s invigilators float through the walls while light occasionally threatens the hanging canvas that covers the door, but while inside you remain completely unnoticed. It is as if you have taken a step out of reality into a liminal space; a paradoxical doorway in which to catch your breath and take stock, only to emerge again into the garish light of the gallery. It is a work of comical simplicity – Ruthenbeck does not conceal the CE mark [the mark that shows that it complies with EU directives] at the base of the light bulb, a testament to its commonplace origins – but one that further illustrates the artist’s ability to capture the maximal through the minimal.

The single weak point of the retrospective is the East Lobby, which is hung with a series of black-and-white photographs taken between 1961 and 1971. The monochrome images are of forgotten spaces – roads, construction sites, restaurants – the visual reifications of the discernible emptiness that was present amid the Furnitureworks. They are unnecessary, slightly obvious and present a strange challenge to the viewer’s intelligence – “Did you not find it earlier? Here is a picture of a solitary beer glass. This is what it feels like to be alone and overwhelmed.”

Moving from the lobby to the East Gallery, however, this blatancy is thankfully lost again with the introduction of two of Ruthenbeck’s better-known works: White Paper Heap (1978-9), a pile of 600 crumpled pieces of paper, and Overturned Furniture (1971/1993), a series of two tables, four chairs, a chair with an armrest and a chaise longue, each of which is lain on its back. The inclusion of this latter work in the retrospective has proved particularly contentious and, unfortunately, has reawakened a much-used critique that plagued a generation of conceptual artists. “These are everyday objects. Not objects of artistic merit, but objects with a clear function. How is this art? This is overturned furniture, not Overturned Furniture.” But this capitalisation is incredibly important. Ruthenbeck has taken these tables and chairs out of their natural environment and, in a manner akin to the likes of Joseph Kosuth, Marcel Duchamp and, more recently, Ai Weiwei, has redesigned their meaning. Not only does he reposition the furniture within a modern gallery setting, removing it from time and space, but in his inversion of the furniture he also strips it of any functionality. These are no longer objects of practical purpose, but objects on which to look. This particular field of critics appear to assume complete knowledge too readily, unable to follow any further line of questioning beyond the realisation that a chair is a chair or a pile of paper is just that. “I know that this is a table. It has been turned upside down, but it is a table. So I ask again, how is this art?” It is art because it presents a stumbling block in the monotony of the everyday, because it repositions a conventional and accepted norm and as a result forces the viewer to re-evaluate their pre-existent set of beliefs.

A man walks into the same living room that he has walked into for the past three years, but feels like a stranger. He is very aware of himself. He remembers that the cleaner came yesterday and realises the coffee table is slightly off centre. From the first room to the last, Ruthenbeck’s works trip you up in this way. They represent known forms in an unknown state – objects simultaneously familiar and alien that inspire both a feeling of unease and a questioning of the acknowledged truths of everyday life. How is this art? It is art because, like the coffee table, it is slightly off centre. It is art because it makes you reconsider something that you thought you knew. It is art because we are not talking about the West Gallery living room of two tables, four chairs, a chair with an armrest and a chaise longue, but about Overturned Furniture, a work by Ruthenbeck that was conceived in 1971 and has inspired debate ever since. 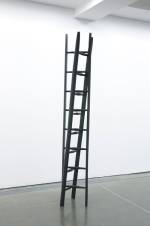