The boys the girls and the political

The boys the girls and the political

The Lisson Gallery’s summer show takes a linguistic turn while tapping into the trends of the networked age. Studio International talked to its curators, Hana Noorali and Lynton Talbot, and discovered the meaning of the ‘metamodern’

The boys the girls and the political, this year’s summer show at the Lisson Gallery, reinforces the gallery’s position as an influential and pioneering contemporary art space, which advocates new thinking and approaches to art-making, and shows a commitment to younger artists. The gallery has a strong record of holding experimental summer shows in recent years. In 2008, Perplexed in Public transported works outside the gallery and created a series of public interventions. In 2013, Fusiform Gyrus, curated by Raimundas Malašauskas, enticed visitors into a sensory landscape, with the exhibition name belonging to part of the brain involved in face recognition. This year, the gallery has invited the London-based curators, Hana Noorali and Lynton Talbot, to present an exhibition with an open platform to realise their independent project. The title is derived from a series of seven paintings: The boys the girls and the political (2015), by Jesper List Thomsen, who is one of 10 international artists participating in the exhibition.

The artists featured are those whom the curators have, in most cases, had working relationships with in the past, many spanning five years or more. They are Thomsen, Lucy Beech and Edward Thomasson, Elaine Cameron-Weir, George Henry Longly, Beatriz Olabarrieta, Ben Schumacher, Richard Sides, Cally Spooner, Alice Theobald and the art collective Am Nuden Da. The curators present new material from each artist in a fresh and engaging show. Noorali and Talbot say: “Each of these artists demonstrates one, or at times all, of the three key themes within the show – collaboration, the use of language as artist material, and an inquiry into the nature of creative labour.”

The use of language as artist material is framed by a selection of works that take a linguistic turn. For the Danish-born artist and writer Thomsen, who now lives and works in London, the written language is a springboard for the series of paintings, The boys the girls and the political. “Thomsen describes in text a lived event as a stream-of-consciousness performative act, the written material generated becomes documentation of an experience much like a photograph,” say the curators. The act of writing is transformed into seven pieces, modular in their interchangeable parts, which create a “grammar” through the exhibition. The work suggests the curators’ interest in the fluidity and capacity of language to permeate a space beyond that of the singular object.

British writer and artist Cally Spooner has composed an audio piece with six a cappella voices, which plays on a single speaker on a stand, in a work entitled And As the Medieval Cloisters Connect Seamlessly With the Corridors of Power … I’m Quietly Confident (U-Turn) (2013). You can listen to actors’ voices create a social harmony; yet, as a counterpoint in the background, you can hear the artist reading a transcript of former education secretary Michael Gove’s parliamentary speech in which he was required to make a public U-turn on a proposed educational policy.

Spanish artist Beatriz Olabarrieta expresses an intention to explore how language lives inside and around objects. In her artwork Untitled (2015), she incorporates televisions or projectors into her sculptures, and, in doing so, plays with the vocabulary of today’s multimedia landscape. The technological world is also the subject of a work by the art collective Am Nuden Da, formed by Thomsen, together with Adam Gibbons and Lewis Ronald. Facebook Blue Filler (2012 – present) is an ongoing installation, the first part of which derived inspiration from Blinky Palermo’s Blaue Dreiecke (1970). Presented in its seventh iteration here, the subtle and responsive work is composed of a sequence of blue marks in coloured wall-filler, which evokes the blue used on Facebook.

The act of reading is explored in British artist Alice Theobald’s And the Wanderers Wandering at the Wonders of Themselves (2015), three films that trace the steps of two people wandering through a public square in Hackney, east London, from different angles. Each film is edited to reveal more than one viewpoint. In playing with the language of editing, and giving the viewer multiple readings of the encounter, Theobald explores the nature of communication and the representation of reality. Distributing the three films on three flat screens across both buildings of the exhibition is a smart move. The curators offer space for thought about the transmission of ideas across the conceptual art. The work can be intellectually demanding.

Noorali and Talbot say: “We wanted to mirror the artists’ approach to making in our presentation or curatorial method. In this sense, there are a number of fixed locations where artists needed space to make the work and use the resulting environment, but all artists are represented in numerous sites throughout the exhibition and across both buildings. This is an attempt to allow the practices of these artists to permeate the entirety of the show and their works can act as “grammar” or “punctuation points” to some extent through the exhibition.”

With its emphasis on the context of technologies, modern communication and flows of information, the show taps into the trends of the networked age. Since multiple readings on multiple levels emerge from the artworks, such as Theobald’s films, this exhibition appears distinctly postmodern. Yet the curators add their own twist to such an interpretation by turning to the theory of metamodernism, originated by Dutch cultural theorists Timotheus Vermeulen and Robin van den Akker, which has attracted attention in the art world in recent times. As in the case of this summer show, you could find that their ideas are worth exploring.

Noorali and Talbot say: “Vermeulen and Van den Akker’s works on the “metamodern” could be said to have informed our [curatorial] approach. In their essay, Notes on M etamodernism, Vermeulen and Van den Akker outline a definition that sits between postmodern irony (encompassing nihilism, sarcasm, and the distrust and deconstruction of grand narratives, the singular and the truth) and modern enthusiasm (encompassing everything from utopianism to the unconditional belief in reason).”

The curators add: “Ontologically, metamodernism might be imagined as a pendulum in constant flux, moving continuously to (and away from) innumerable poles – enthusiasm, fanaticism, irony, apathy. As an understanding of the contemporary, geopolitical climate, metamodernism describes a landscape of homogenised politics, democratised online space and an environment of open exchange. The artists presented in The boys the girls and the political demonstrate working practices that reflect the increasingly fluid way in which information is sent, received, digested and shared within the undoubtedly humanised technology of our time.” 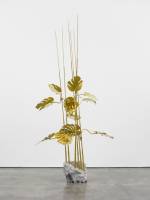 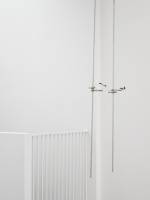 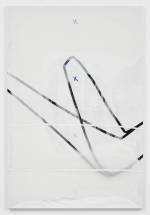 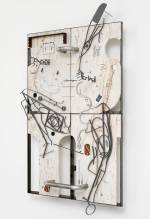 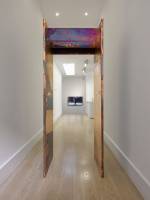