Alex Katz’s paintings are recognisable from their bold, flat and often colourful depictions of figures and landscapes. Katz, who was born in Brooklyn, New York, in 1927, found an artistic formula that was emblematic of his lifestyle as well as his subject matter, to which he stayed loyal.

Consequently, his works are iconic and numerous. After graduating from Cooper Union School of Art in Manhattan in 1949, he moved to study at Skowhegan School of Painting and Sculpture in Maine, where he established this characteristic style. In 1954, he bought a home and a studio on a lake in Lincolnville, Maine, to which he has returned every summer from New York City.

As he paints what surrounds him – his family and his locations – Katz’s lifestyle is a recurring theme in his work, and many exhibitions have been curated thematically. At his sixth show at Timothy Taylor Gallery, titled 70s/ 80s/90s, a new approach has been taken, similar to a small-scale retrospective, with works made in these three decades. There is one painting from 1975, five from the 80s and five from the 90s. The punctuation of the title – the decades divided by the casual and interchangeable forward slash rather than an inclusive comma – made me question the relevance of chronology in Katz’s work: it seemed as if the focus were transferred to its duration. The collection of works celebrates his steadfast style and his commitment to it; years turned into decades as Katz continued to paint using the same devices and techniques. His style stayed the same, as did his wife, Ada del Moro, and his holiday home.

The press release states that the exhibition initiates a “distillation” of the works – what the Oxford Dictionary terms: “The extraction of the essential meaning or most important aspects of something.” I was intrigued to discover how Katz’s already reductive works could be distilled even further. As promised, however, the works are “distilled” into their essential categories: Ada, Maine and New York City, along with a couple of smaller works. Ada is distilled through the large-scale work, Ada, Ada (1991), in which eyelashes, eyelids and the inside skin of her eye are anatomically simplified. She is a generic classroom model of science and a clone on the canvas. Chalk white smudges into the dark grey, softening the image. Katz started painting Ada in 1957; they married the following year. An attractive model and convenient muse for Katz, Ada is the bridge between his life in Manhattan and that in Maine.

The painting Vincent & Vivien (1987) characterises life in Maine. It shows Vivien, his daughter-in-law, reclining horizontally on a sofa. I use the word reclining here in its most meaningful way; she is fully relaxed with her neck and head supported. Katz’s son Vincent leans his weight on the back of the sofa, perhaps asking her a trivial question. They both wear patterned jumpers in a land where leisurewear is daily attire. Their poses are heavy, their expressions sedate: they are fixed  in the moment.

Across the gallery, life in New York City is a complete contrast. Black Stockings (1987) shows six  women who, I imagine, are crossing Times Square on a green light during their lunchbreaks. There is an extraordinary evolution of natural motion as they travel across the long wall of the gallery. Painted in oil on aluminium, the six individual pieces are  angled forward from the base of the wall. Under the gallery lights, shadow becomes a graphic line device forming another dimension. Unlike the women of Maine, these Manhattan women are untamed, with wild hair, and dressed in black, red and blue. Similarly to the women of Maine, they have a glazed and shallow appearance, which has powerful aesthetic qualities. The press release describes the women as “chic and flirtatious”. Katz and Timothy Taylor Gallery both seem to represent these three decades as socially interchangeable.

Dusk 2 (1992) is a dramatically cropped portrait of a girl. Her acutely angled profile reveals her cheekbone, the outer corner of her eye and a neat eyebrow end. Her hairband is nautical, navy-and-white striped, worn with a blunt fringe and groomed bob. Katz captures the immediacy of the moment in each image, and although he avoids narrative, he is in tune with the positioning of his subjects, so astute that they are almost contradictory to the lifestyle they represent.

His works are often described as a reaction against Expressionism or a pre-cursor to Pop, and similarities can be noted; block colours, flatness and repetition, but we must not collate evidence towards a preconceived outcome. The best articles I have read about Katz do not compare his work to other movements, but allow him a place in an oeuvre of portrait and genre painters such as Thomas Gainsborough, Joshua Reynolds, Pierre Bonnard and Edouard Manet. A liberator of leisure and a solid propagator of the mainstream, Katz lies somewhere between the Impressionists who painted the social world around them, at face value yet often with detectable codes of embedded social understanding, or, on the other side, the Ukiyo-e, the visual culture of the floating island of pleasure in 19th-century Tokyo, where woodcut prints idolised the Kabuki actors and courtesans in their elaborate costumes. Katz’s portraits are somewhere in between: they are real people, yet it is hard to see if they are social signifiers or actors, and you can’t say that they are neither.

An exhibition of Katz speaks for itself visually because the works are so balanced and vibrant that they work as a set. This does not mean, however, that they should not be pushed to their potential and challenged. Titling and describing the exhibition is part of the curating process. Words have explicit meanings that should be carefully considered for the sake of communication. In a commercial context today, curating has never been more important. Art has become more of a financial investment, rather than an aesthetic one, especially in the case of great living American painters, but a commercial gallery is not an auction house or a shop. This is an excellent exhibition and a prime opportunity to see some incredible pieces of art history. 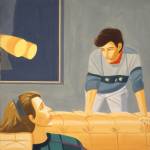