Sitting in the back seat of my parents’ car as a child watching people and scenery passing by, figures were flattened by the glass, their faces blurred by a finger smudge I had made earlier, and their bodies obscured by objects that rose and fell with the motion of the vehicle.

Reflections doubled forms, and the window was just another frame of illusion, where people were extras who emerged and disappeared for my own personal narrative. Marc Desgrandchamps takes fragmentary elements of this experience, monumentalises them and asks you to pause and question this momentary dimension of narrative, where each figure or scene becomes a central pivot to the plot.

In this exhibition of vivid beach scenes, Desgrandchamps has turned up the opacity on his figurative painting, where his subjects slow down to the leisured pace of their location. The title of the show, Solitudes, is a reference to the solidity of his figures, which has been increased compared with those in earlier works. He tells me: “When I talk about solitude, it’s not about a psychological dimension, it’s related more to space. The title of the exhibition actually shifted from solid to solitude because decisive figures structure the paintings. In this exhibition, every figure has a materiality and a solid consistency, whereas, previously, they were much more fluid and transparent.”

In one piece, a seated female figure fills up almost half the canvas. Her dress is painted with a solid block of black acrylic paint. It is as if the colour has strengthened with duration, and she adopts the immobility and weight of an Alex Katz painting. She is a static viewer, too, and she continues to watch a figure move across the horizon, yet our window is limited to Desgrandchamps’ canvas, and the watched figure will soon disappear. Looking across the works in the exhibition, it seems that transparency is directly linked to movement, and the paintings are built up of layers of speed, where the beach is the strongest and most static object. “This is a way to reaffirm the solidity of the figures, in creating separate layers, and this is why I talk about solitude, because they are not interwoven. You have this moving aspect: they are in motion against the scene of the beach, which is still and immobile.” Speaking about the progression of his work, Desgrandchamps continues: “My intuition tells me that I will always be in between opacity and transparency with the figures.”

Although Desgrandchamps could be labelled as a figurative painter, his landscapes are sometimes empty, but despite this, the viewer is always aware of a very human presence. “I have a fascination with the figure, which is more or less always female, but the presence of the human figure can be felt even when there is no figure at all.” He explains further that, because the beach is a manmade environment, it is an “emptiness that can always generate presence”. Evidence of our human existence lies in objects such as a metal dustbin, a signpost and piles of unused deckchairs. These objects seem almost surreal without their creators, like Dali’s melting clock face in the sunshine. There is a dimensional duality in Desgrandchamps’ work, where the viewer will find themselves between flat layers of figurative representation, yet the beach offers a horizon of depth. “There is a contradiction between these two realities and it’s a contradiction without a solution. This is related to my double culture. I’m very interested in the modernist tradition of abstraction, yet also figurative work. Figurative painting is related to an idea of representation in a dualistic space. The third dimension is always related to the figure, even if this is an illusion. I know it’s an illusion, but it’s still relevant.”

Desgrandchamps talks about his use of photography as a tool for recording. “I have no pretentions to be a good photographer and that is not what interests me. If I see something of interest, I take a photograph to help [me] remember something for a painting. I’m afraid I will forget what I saw and it helps with memory. I see photography as a tool to make paintings.” Photographic influences are clear within Desgrandchamps’ paintings; there is a snapshot-style quality about the framing, and also a certain flatness. “Photography is very important to me, and all these things you mention are absolutely clear. There is a flatness in my paintings, also present in photography, but what is important also is the relation to what you could call a ‘photographic time’. It’s a mixture of presentness and a kind of immobility. Like painting, photography is a way to transcribe and show the passage of time. The blurred effect of the figures is a way to show the passage of time, that there is something going on.” It’s a painting of duration and reality, like the effect of a slow shutter speed.

Almost like a stage on which we expect action, the beach offers various uses for Desgrandchamps. “The beach is temporal, it extends far away and it’s very primitive, but it’s also a modern invention and a social setting. On the other hand, you lose that social dimension: often people sit alone or in small groups, they are almost naked, so they are not in a social logic, as they are in the city.” The beach is a site of human observation for all and has been an influence to painters throughout art history because of its social and natural dimensions. Desgrandchamps told me about his artistic influences, too. “In the 1930s, Picasso was making paintings of beach scenes that were almost surreal, and maybe my three planes have been influenced by this; my paintings are always structured by the sky, sea and the land. Another painting of influence, also from the 30s, who is almost unknown is Christian Bérard. He made a kind of geometrical beach scene with one figure, who is almost lost in the sand.” The rich colours of the location he describes are also important to Desgrandchamps. “I am very sensitive to the south, the Mediterranean light, and this strong blue in my painting. I take elements from everywhere, so you don’t have to know where it is, but these are beaches in the south.”

Although the beach has this broad social dimension, there is an individuality in the way Desgrandchamps depicts each figure. This approach has similarities to Wilhelm Sasnal’s painting, Bathers at Asnières, (2010), picks out one protagonist from Georges Seurat’s Une Baignade à Asnières, originally painted in 1884, starting a conversation about the loneliness of leisure of contemporary life. Sasnal brings the focus from a scene of many and isolates a personal experience: in the same way, Desgrandchamps’ empty beach offers similar questions of personal solitude. “The idea of narrative is very important in my work, but never in the case of a story with a beginning and an end. I include narrative elements, but I do not give a solution. There’s an enigma and you have to find that by yourself. What you said about childhood memory is very important, and we all have that kind of memory. When I was a child, I had this kind of boredom in the back of the car, seeing all these things that appeared and disappeared. Everybody tells their own stories and I don’t give you the story, just elements with which you can build narratives.”

A series of drawings, which were made from the paintings, are also being exhibited alongside the works. They are composed of dashes that increase and decrease in density, again referring to an impressionistic era of leisure. A beautifully compact book has been designed to accompany the drawings, with text in French, German and English. Desgrandchamps summarises personal moments connected to the images and offers a fragment of a solution to the viewer. It does not answer, however, the questions that a thousand captured frames of memories across our lifetime, let alone a day at the beach, will open up. With his paintings in this exhibition, Desgrandchamps moves towards an acceptance, which could perhaps eventually become an appreciation, of an unresolved story and the beauty of a moment, stolen from the life of another who exists in tandem with our own personal and all-consuming narrative. 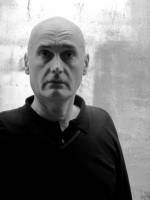 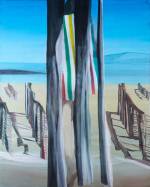