William Crozier: The Edge of Landscape

William Crozier: The Edge of Landscape

Working in the shadow of the second world war, the nuclear threat and the Irish Troubles, Crozier’s work confirms that life is merciless. Yet even at its most desolate, there is a vitality to it, a forceful wildness that shines through in his electric soup of colours 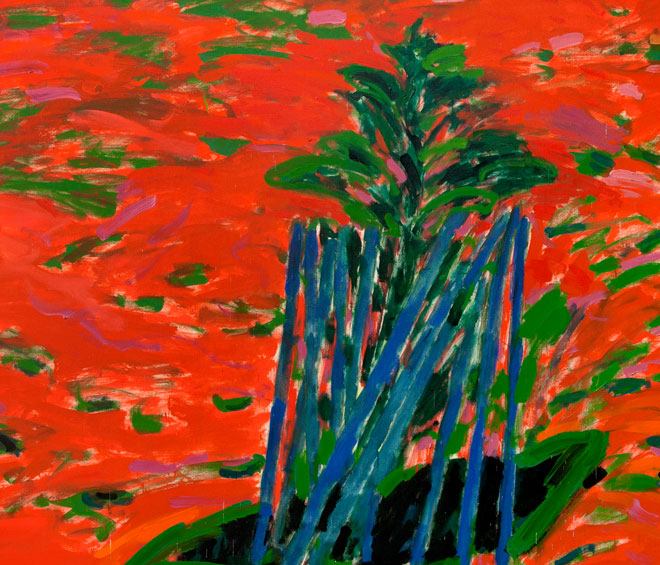 In the aftermath of the second world war and the Holocaust, much of European culture was dominated by a renewed sense of sincerity. Mirroring the experiences of the recent past, the creative responses of the time often bordered on despair and brutality. The stricken psychological environments of earlier expressionists such as Edvard Munch no longer seemed overwrought, while the mind games of the surrealists suddenly seemed far too playful and flippant for stark reality. In Paris, existentialist writers would try to bring some form of order and meaning to what seemed overwhelmingly chaotic and meaningless. Some of their compatriots (Samuel Beckett, Antonin Artaud, Georges Bataille, etc) seemed to believe there was little meaning or solace to be found in the abyss but acknowledged that was where humanity dwelt regardless. Across the sea, as this gripping retrospective at the Irish Museum of Modern Art (IMMA) demonstrates, William Crozier began to articulate these matters in paint. 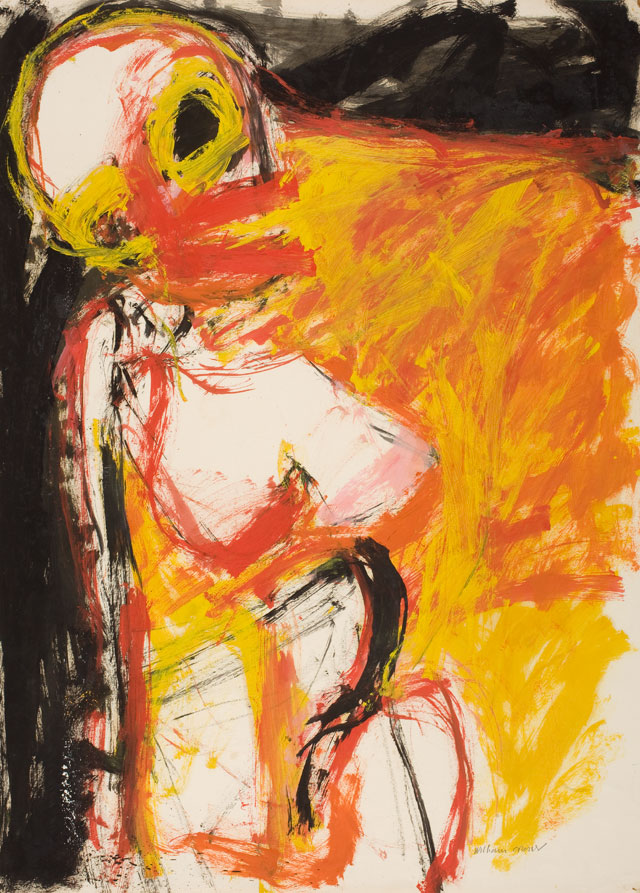 Born to working-class parents in Scotland, Crozier (1930-2011) graduated from Glasgow School of Art in 1953. Moving between the bohemian scene in London’s Soho and rural Essex, it was a brief but inspirational spell in Paris that proved crucial to his work. Crozier’s paintings became increasingly experimental and charged with emotion. “The painter is not seeing but reinventing,” he claimed, “making the apple or the landscape in the image of his own disappointment or eccentricity.” This view began to warp the countryside he painted in idiosyncratic ways. In one untitled piece from 1958, the landscape is rendered indistinct but stops short of abstraction. It appears a no man’s land, or perhaps a land all-too ravaged by mankind. This is a place of dead trees and stagnant lakes; an industrial aftermath, almost apocalyptic in its sense of blitzed decay. Where there is life, in the striking fleeting use of blues and reds, it seems unnatural. The grandeur of earlier colourists appears diseased here. It is a landscape where romanticism seems not just dead but murdered. 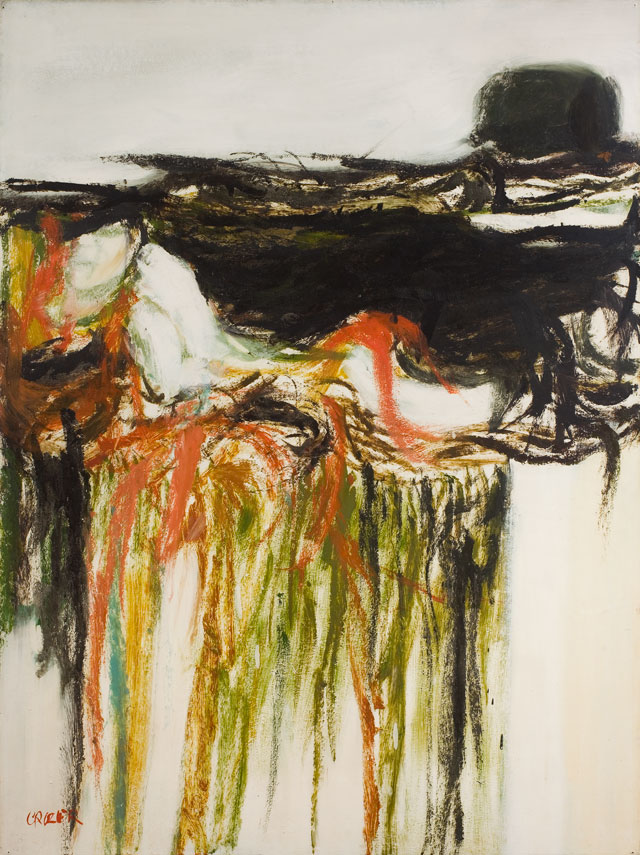 Yet, even at its most desolate, there is a vitality to Crozier’s work. In another untitled piece from 1960, he moves again towards the abstract, but moss or the tendrils of tideline seaweed still appear discernible. The atmosphere is not only grim but inventive, as if feeling had transformed the Earth and we are gazing at alien flora and fauna. Crozier’s painting Empty Hill (1959) is clearly a pessimistic work; a setting where living things writhe as much as grow. Perhaps this is not a case of seeing through a glass darkly, but, rather, viewing the world with too much precision for comfort. The environment is, after all, a place of struggle and slaughter as well as procreation. Bird calls, for example, can be alarms as well as courtship songs. The viewer is not entirely a passive observer in front of Crozier’s work. There is the implicit suggestion that humanity had a part to play in this, or perhaps these are portents for us, painted at a time when the threat of nuclear annihilation hung over the world much as climate catastrophe does today.

By the 60s, Crozier’s landscapes had become increasingly populated, although whether the figures can be said to be living is questionable. These are the dead and dying. Robbed of the individuality of their features, they appear more as cadaverous ghosts than characters. There are traces of Francis Bacon, in whose London social circles Crozier once moved, in the tortured visceral forms as well as the velocity and skilful imprecision with which the canvas is assailed. In an untitled figure from 1961, the face is stripped away to the skull. It is a memento mori, but the figure seems somehow distressingly alive, an anguished volcanic backdrop reflected on its flesh. An untitled landscape from the same year seems saturated in blood, like an obscene wound. Its power lies in its ability to simultaneously repel and puzzle. 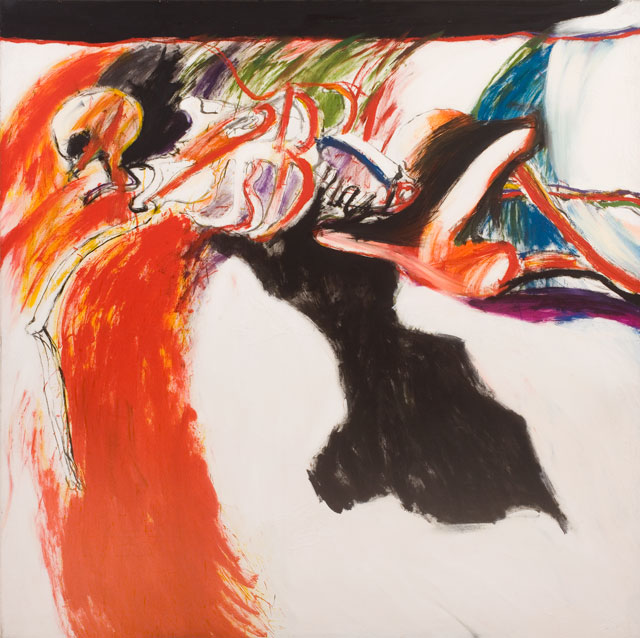 Another existential artist’s work, the desiccated figures of Alberto Giacometti, shadows Crozier’s. Yet the artist has his own vision, terrible as it is. In Giacometti’s sculptures, the figures endure, however stricken. In Crozier’s paintings, those slender reassurances are absent. If the figures are alive, it only confirms that life is merciless. Death would be a blessing, as well as a crime. At what point, Crozier asks, does a human being become something else? At what point, does what was once a person with a name and an identity become meat? His Fallen Figure (1962) is framed in skeletal collapse. Paint is applied like wild streaks of blood. It is a portrait of death that, in its pulsing jerking rhythm, seems very much alive. Anxiety, as crushing as it might be, was still an energy. 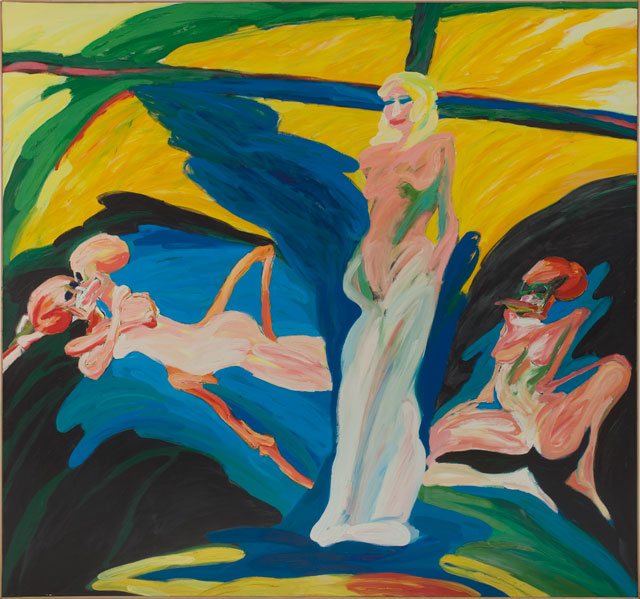 Morbidity can, however, distort, at least as much as sentimentality can. We find in The Ladies of Charlotte Street (1975) the kind of scathing venom that fuelled George Grosz. The skeletal forms find their way into this work, too, with all the puritanical hysteric unease of a vintage public health warning of venereal disease. One undead corpse is splayed in a grotesque parody of wanton pleasure. Two others are fornicating. Colour swims around them, as toxic as they are vibrant. A Madonna, in contrast to the archetypal whores on either side, occupies the centre, before an imitation of the cross. Perhaps she is redemption personified. Or perhaps another siren. It certainly has impact, but of a questionable kind.

With the Troubles of Northern Ireland then on a blood-stained plateau, Crozier painted Crossmaglen Crucifixion (1975). It feels like a centrepiece of his career. The familiar emaciated almost extra-terrestrial figure is present, robbed of identity in a land where having the wrong identity could cost you your life, amid Crozier’s electric soup of colours. As the north tore itself apart, partly in the name of religion, a work of reimagined Christian iconography such as this packed a punch. It conveys the sickening waste; the aberration of justified murder; death as a cruel and disproportionate presence. It revives what has long since turned into the partial amnesia that is decontaminated history. It is raw. What it lacks in complexity or nuance, it makes up for in elemental strength. We know this image before we see it. It was set in Crossmaglen, but we recognise this figure all across the world and all through the bloodiest century in history. 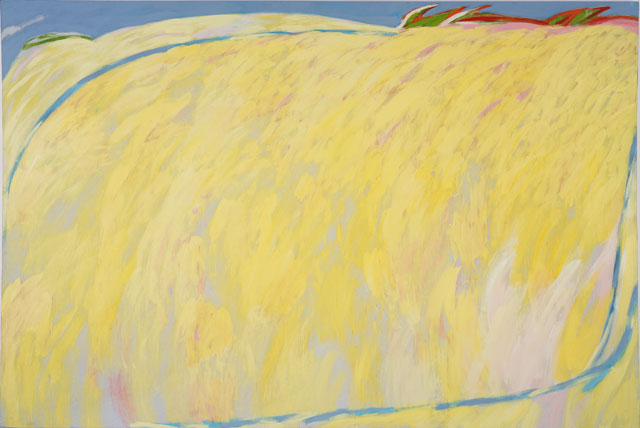 Crozier’s later work, such as The Watermeadows (1977), suggests a new-found serenity. Yet there is still a forceful wildness at work, and still an intimate but alien feel to the environment. The Rowan Tree (1982) appears almost fauvist in colour and pattern. His lyricism is increasingly noted, but the paintings are still directed by emotion. Crozier never lost his existential leanings, although now they were joined by a stoic’s appreciation of beauty. “Man is condemned to be free,” Crozier’s fellow traveller Jean-Paul Sartre wrote, “because once thrown into the world, he is responsible for everything he does.” This sounds ominous, but there is, at least, freedom; whatever its condition or demands. Crozier recognised this dilemma and rose to the challenge. In doing so, as this powerful exhibition shows, he discovered colour in the darkness. 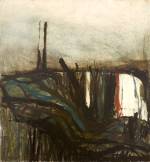