'Outsider Artists' are not only untrained, but have also avoided 'social conditioning and cultural indoctrination' according to Michel Thevoz, Curator of the Collection de l'Art Brut in Lausanne, Switzerland, the largest and most comprehensive museum of 'Outsider Art'. 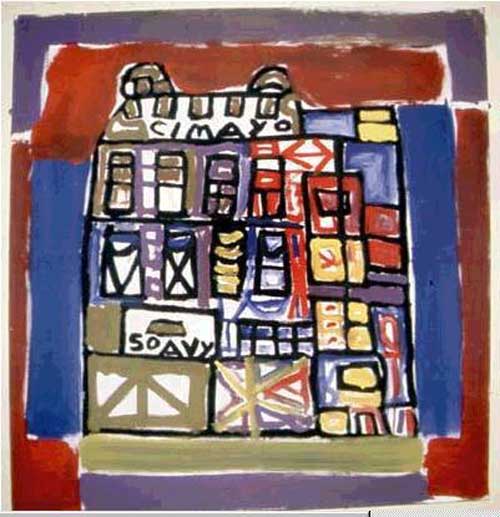 'John the Painter' has been a resident of psychiatric institutions for three decades (hence the anonymity) and is presently living at Our Lady's Hospital in Cork. In 1993, after 20 years of confinement, 'John' began taking art therapy workshops under the auspices of Cork Community Artlink. He had his first chance to use paint and brushes and found an original and, literally, fantastic voice.

From initial small works – mainly repeating geometric patterns – he completed his first major painting on paper that covered an entire wall in the makeshift hospital studio within three years. Measuring six metres by two, 'Jet Plane, Blue, Red, Yellow, Green, Boxes, Arrows on Grand Parade, Chinese Version' is a fabulous spectacle that seems to chronicle 'John's' rapid maturity as an artist. At the far left are black geometric lines, perhaps a little tentative. Then the lines become colourful and a male figure is surrounded mainly by white space. Moving to the right, 'John' slowly experiments with colour and form. He applies more paint – bright colours begin to fill every space except at the top of the painting, where arches and roof beams are outlined as if to cap the work. The work becomes more complex and intense; the brushwork is more confident, longer lines of colour and larger blocks of paint are applied as he approaches the right of the painting until (at the extreme edge) recognisable structures emerge: numbers, arrows, houses, windows, kites, a Union Jack and the Japanese flag.

After this large-scale work, 'John' seemed to gain confidence and began to explore favourite themes: people, places and things remembered, and loved, from his childhood in Cork. Two paintings, side by side 'Savoy' part 1 and 2) depict the Savoy cinema from different perspectives. In the first, a face, probably 'John's' own, is at the centre and the cinema swirls around it, bending, pulled towards the face. His affection for the cinema is clear, the colours bright, contrasting; one window smiles at the viewer, another displays a vibrant red and yellow heart. The work is a deeply felt expression of happier times and warm memories of his youth – a time of great change and excitement, when the first Apollo missions were being launched and Elvis, the Beatles and Rolling Stones were battling for the charts.

The second Savoy painting is also full of affection, but – having allowed his raw emotions full reign in the first work – this is a more restrained expression of his feelings. He needs to recall the cinema realistically in order to pay homage to it. Although 'John' has not seen it for 30 years, for those who know Cork, the Savoy is instantly recognisable. The basic shape and structure of the cinema are formally outlined in black but, again, the windows are full of colour and expression. Fields of colour – blues, reds and purples – surround the Savoy, as though to protect and preserve it.

Another Cork landmark, the Mangan Clock, is beautifully remembered in 'Shandon'. Created about a year after the two Savoy paintings, in this single work, 'John' has combined exuberant memories with the elements of realism that are essential to him. The clock is supported by struts and crossbars forming a wide, happy grin. Atop the clock face is a rectangular tower with the appearance of a human face; its eyes, nose and lips have an expression that is benevolent but serious. 'John's' Mangan Clock is an important building with a playful purpose. It is a gentle giant, studying passers-by and protecting those who meet under it.

'John's' work falls into two broad types: memory paintings, in which an apparent jumble of black and coloured lines which reveal – on closer inspection – details of fondly remembered people, places and objects; and contemporaneous paintings, in which he records his present surroundings with vibrant blocks of colour and shapes, free of the black lines that help to make his memories tangible ('Flower Pot' and 'Tea for Two').

Everyone remembers that Picasso's eyes were opened to Cubism by the influx of African sculpture to the West. What is forgotten is an equivalent creative influence on Surrealism; Adolf Wolfi, confined to a small cell in a Swiss asylum, produced thousands of influential works. Dr Hans Prinzhorn collected paintings from many more inmates and published Artistry of the Mentally Ill in 1922. It had a major influence on Jean Dubuffet and André Breton – who, together, recognised the importance of Art Brut or Raw Art.

From another country, in another era, has come 'John the Painter', an untrained and – for 20 of his 30 years in relative isolation – completely 'artless' talent. His transformation, from voiceless 'mental patient' to fluent and brilliant communicator, is a tribute, not only to his own genius, but also to a dedicated group of art therapists and teachers, especially Artlink's William Frodé de la Foret. 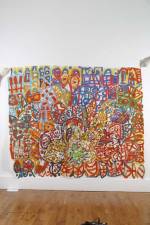 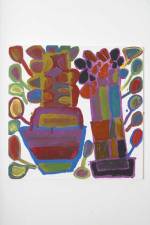