A visitor pavilion by Feilden Fowles opens up an overlooked area of the 500-acre sculpture park. The Weston responds to its setting with a sensitive design - part sculpture, part architecture - utterly in tune with the landscape 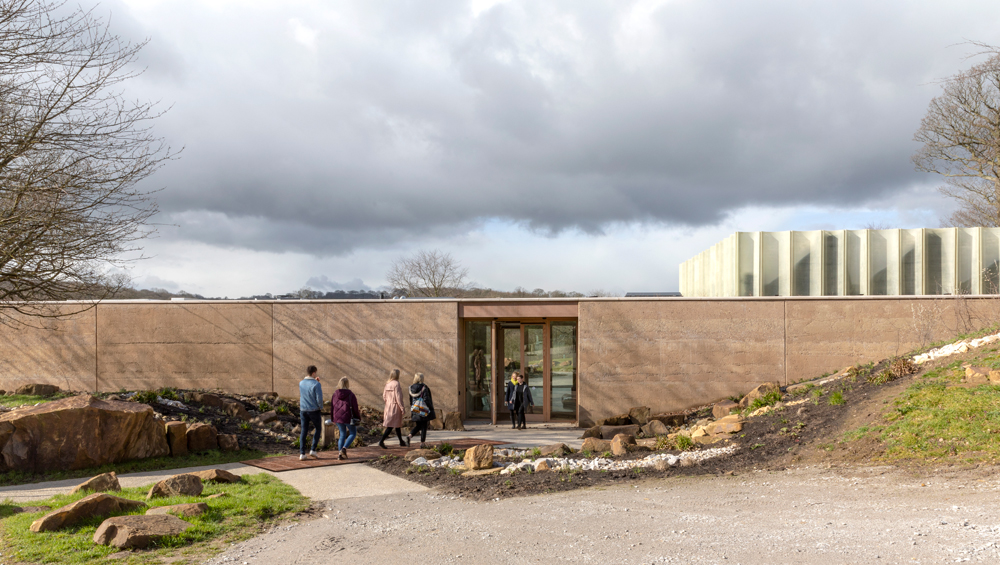 The Yorkshire Sculpture Park in Wakefield is a national UK arts institution. Established in 500 acres of rolling Yorkshire countryside in 1977, its mission is to promote the joys of contemporary sculpture in an accessible, natural setting, in tandem with a pioneering arts education programme. Thanks to the inspired acquisition and curation of about 80 sculptures and installations, and an expanding programme of temporary exhibitions in buildings both new and restored, the park is now visited by half a million people every year, and boasts one of the finest sculpture collections in the UK.

The newest of these buildings, the Weston, is ostensibly about activating a part of the landscape that had been dormant: set high into a disused quarry, it opens up the eastern edge of the park, closest to the M1 motorway, the main artery connecting London with the north. The Weston brings a new gallery, restaurant and visitor facilities, and provides a focal point where there was none. It also includes some additional parking space. That sounds very practical and infrastructural, but this new building, by the young London practice Feilden Fowles, is so much more than that. 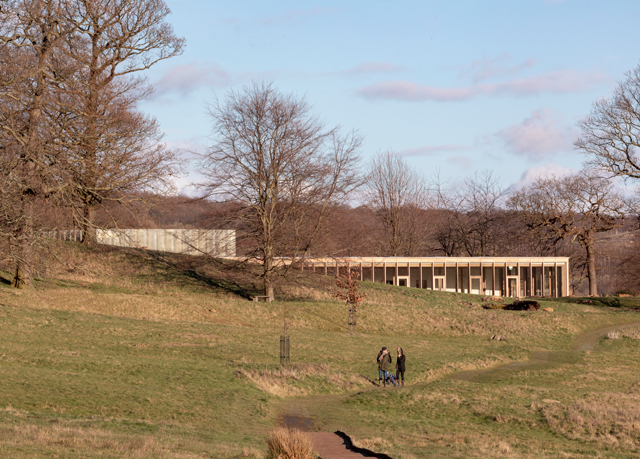 Like James Turrell’s Deer Shelter Skyspace (2007), just a field away, the Weston presents a blank face to the arriving visitor: a monolithic single-storey wall of layered, pigmented concrete runs for 50 metres, with only one aperture, in the form of a glazed doorway. But where Turrell’s work involves a procession through a concrete corridor before the big reveal - a toplit, light-drenched cell – the Weston couldn’t be more different. Crossing the low entrance threshold, the visitor steps down to a large, open platform serving up a wide, panoramic vista over fields, lakes and wooded hills.  Glazing arcs around in one long, inward-curving sweep, interrupted only by the slim, wooden pillars of this section’s light, timber pavilion structure and the pale wood furniture of the Weston’s restaurant, to the left. Immediately before the restaurant is an intimate, low-walled, soft-seating alcove with a wood-burning stove; here visitors can sit and revive themselves after a chilly wintry walk on the premises (the YSP is open all year round). 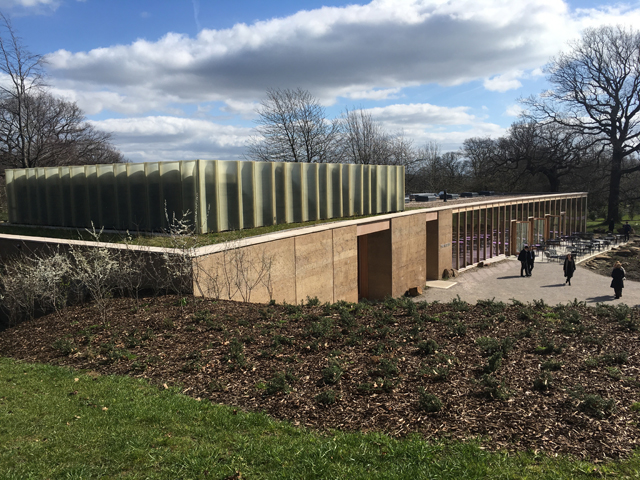 This sense of welcome and refuge was a notion that emerged when architects Fergus Feilden and Edmund Fowles first encountered the site in 2014 as they prepared their competition proposal. Feilden says: “We cycled here from Wakefield on the tail end of an October storm. We came along that infrastructural corridor, with wind battering the site, and the noise of the motorway. I was looking for some kind of shelter. As we were siting the building we felt a lot of resonance with that. We had to create a bit of a haven here, and a real threshold.”

Other inspirations came from the sculptures they loved in the park, such as the Turrell and, of course, Henry Moore, one of the park’s first patrons, whose bronzes create strategic moments of pause and reflection on the fields and lawns here – often surrounded by grazing sheep. Fowles says: “Henry Moore once said: ‘The first hole made in a piece of stone is a revelation.’ Form and the absence of form was of interest.” 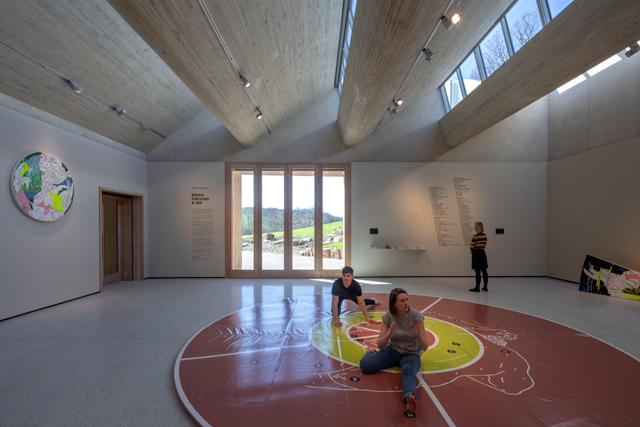 This idea resonates in the Weston’s monolithic exterior wall, but also in the gallery space, to the right of the entrance. Here, rooflights carve great stripes of sky across the ceiling, framed by huge concrete structural beams whose curving, bullnosed forms suggest a wave-like rhythm. Above the roof, these beams emerge as triangles, creating a distinctive sawtooth profile. To soften that roofline’s impact on the landscape, they are enclosed on four sides by undulating fibreglass panels, which then become a lantern as dusk falls, with light from inside the gallery projected on to their semi-translucent planes. Both this roof lantern and the warm glow of the restaurant’s glazed facade will turn the Weston into a landmark as well as a seductive beacon from across the site. 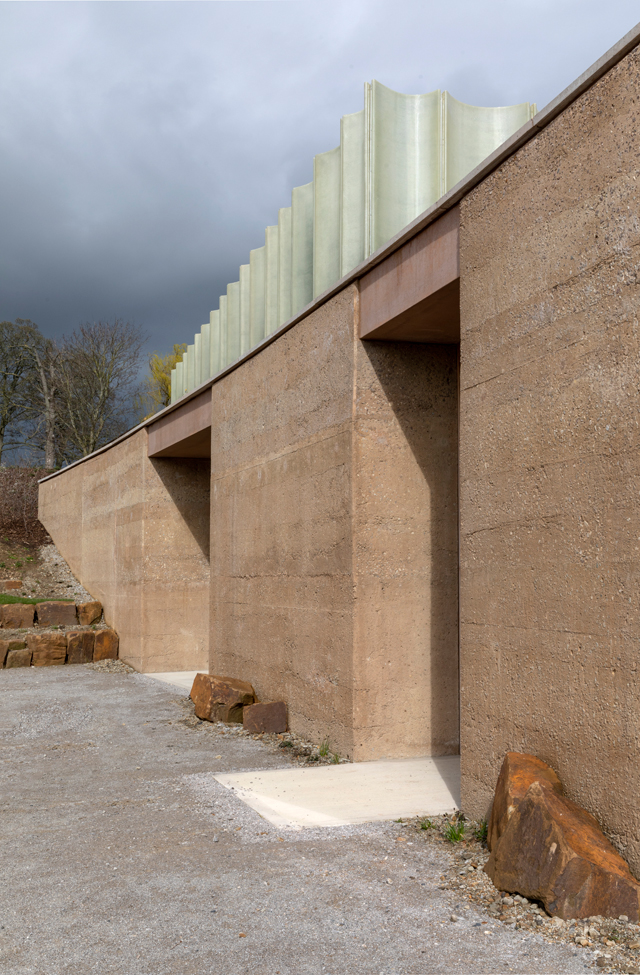 With the building’s interplay of solidity and fragility, strength and lightness, and its harvesting and choreography of light, it is clear the pair were concerned with, as Fowles puts it: “The relationship between sculpture and architecture and how can we try to embody these two things.” As well as Turrell, he says, the pair looked to “the land artworks of the 1960s and 70s, such as Robert Morris and Richard Long, the idea of carving landmarks into the ground, working with contours. There’s such a rich history of the geology of the area. We wanted to bring the layers through into this monolithic wall.”

Consequently, the aggregate used in the concrete is drawn from local quarries – a mixture of sandstone, limestone and granite - and boulders from the quarry itself are deployed in the rock-garden-inspired landscaping. The walls also hide a pioneering environmental control feature: between the concrete layers are 10,000 unfired clay bricks that moderate the temperature and humidity of the gallery. This hugely reduces the building’s energy requirements – there is only passive ventilation throughout the building, except in the kitchen area. 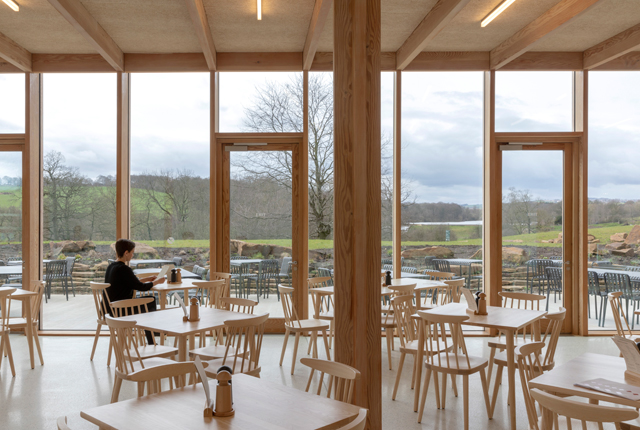 The architects were also playing with the idea of plinths. And the building’s southern, park-facing elevation does appear to sit on a long, pale platform, thanks to the simple paving that forms the outdoor dining terrace, which matches the light terrazzo flooring throughout the restaurant and lobby. These materials, along with the lime-rendering on the walls, make the building quietly – or brilliantly – luminous, depending on weather conditions. As Clare Lilley, who has been director at YSP for 25 years, says: “This building emits light and that’s one of the many really pleasurable things. In many senses, Feilden Fowles were a bit of a risky choice. They are young and a little bit untested at the time of the competition, but we liked their curatorial and educational ethos. They are very much about that direct connection with materials … and the important relationship between sculpture and the landscape.”

For the architects, an ambitious client and a decent £3.6m budget, meant this could be a career-defining project. But the way they met that opportunity speaks volumes about the ethos of this talented, but grounded pair. Feilden says: “We knew it was going to be a very significant building. We also knew we had some of the world’s most incredible and diverse sculptures in the park and we didn’t want to compete with that. We don’t think architecture should be competing with the landscape, or competing with the art, but should be serving the people, serving the art.” With this gorgeous, crafted new space, they have certainly delivered on that front.