Vanessa Baird: You are Something Else

Vanessa Baird: You are Something Else

Vanessa Baird’s vivid, illustrative pastels depicting domestic chaos and drowning refugees make for an immersive experience in her new solo show, You Are Something Else, at Oslo’s Kunstnernes Hus. This and other new public commissions in Oslo indicate an artist coming into her prime 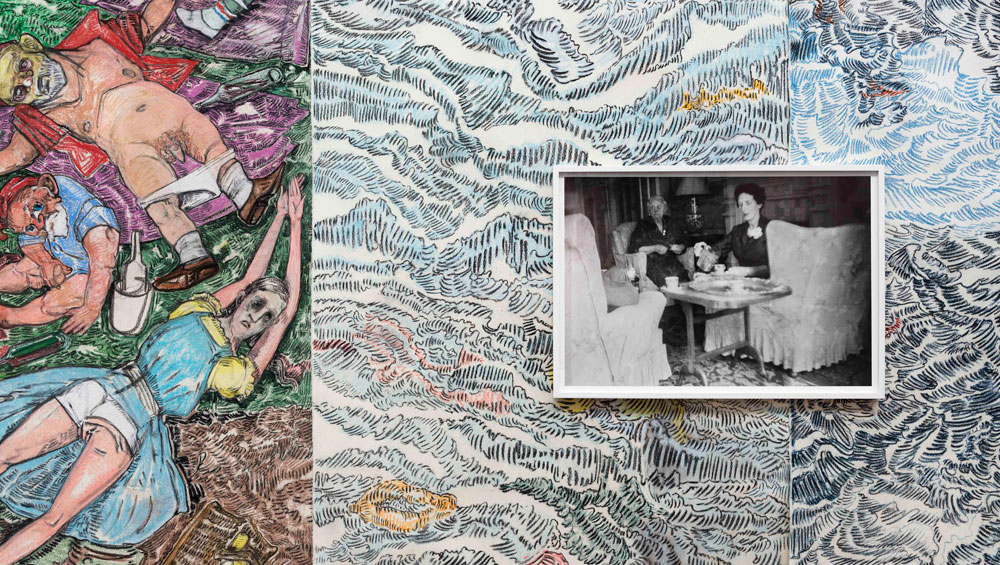 Revenge is sweet, and for Vanessa Baird (b1963, Oslo) it doesn’t get much sweeter. In November 2017, she is celebrating a solo show at the Kunstnernes Hus, as well as the completion of a large mural in the artist-led Sentralen space in downtown Oslo and the unveiling of an entire wall of framed, luminous watercolours within the opulence of the Grand Hotel’s Palmen restaurant. Over the past 100 years, this dining room has entertained some of the world’s leading writers and thinkers, whether as residents or luminaries attending the annual Nobel Peace Prize awards event held here; Baird’s dark, rich-hued, literary and acerbic imaginings will more than fulfill their role as conversation-pieces. 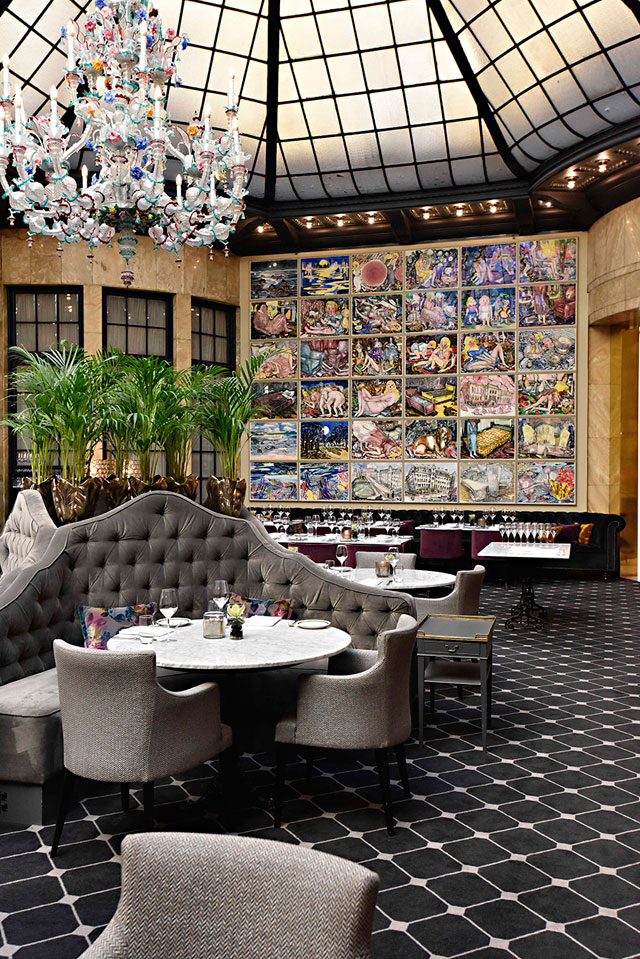 The new show, You Are Something Else, comes two years after she won the Lorck Schive prize – Norway’s biggest art prize – and four years after a three-part work she was commissioned to create for the lobby of the ministry of health was rejected for being too horribly prescient of the attack of 22 July 2011, in which eight people were killed by a bomb at the government headquarters building, placed by lone rightwing terrorist Anders Behring Breivik, who then went on to gun down 69 children on the island of Utøya. This work – To Everything There is a Season (2013) - became embroiled in a media frenzy, stoked by individuals who were spooked by the darkness in the fairytale-inspired imagery and the eerie coincidence that Baird’s mural – conceived and begun the year before the attack - depicts many floating pages, and floating pages are the main identifiable element in the CCTV footage of the explosion. To Baird, they represented the layers of communications between government departments. “Bureaucracy is about swapping papers. It’s what they do,” she says. 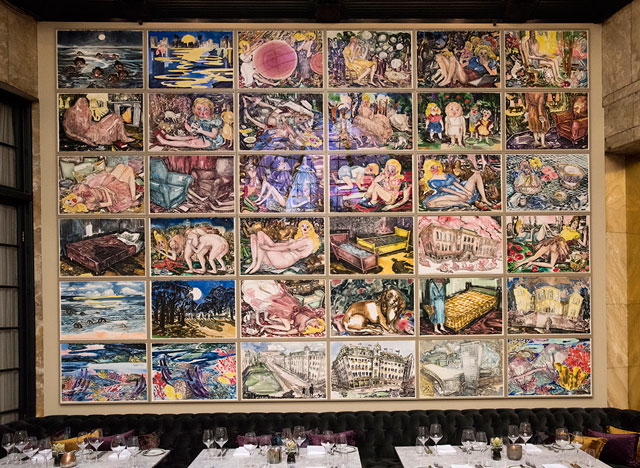 The scrutiny and paranoia she endured around this time is just one – admittedly nightmarish – element in a life that has clearly not been easy. She lives as a single parent, with three children, in the same house as her sister and her sister’s family, along with their 87-year-old mother, for whom Baird is a carer. Baird herself struggles with a chronic kidney condition. Although she has enjoyed the support of the Norwegian government’s laudable practice of paying artists a salary so that they can continue their work through lean times – a system especially supportive of women, who usually bear the brunt of child-rearing at the expense of their creative work – she has often found her art dismissed or diminished, as being “too literary, too illustrative”.

“Of course it’s been revenge,” she says, of her current moment of cultural elevation. “It’s been revenge, anger, fury and frustration … Revenge for the past 40 years.” (As well as being dismissed as too “illustrative”, Baird says she struggled within the education system – first, at school and, later, in her further art studies – largely as a result of being dyslexic in a country that appears not to understand the unique visual gifts that dyslexia can bring, along with the verbal challenges.)

The anger, fury and frustration are palpable in her work at the Kunstnernes Hus. It makes for a disconcerting backdrop to the VIP dinner in Baird’s honour: the walls pulsate with her vigorous, intense drawings, laid vertically like strips of wallpaper around the room. Part of the work is made up of the Lorck Schive prize-winning piece, I don’t want to be anywhere, but here I am (2015). This 18-panel work is joined by a new, much larger, 38-panel, series, You are Something Else (2017). The latter continues its predecessor’s compelling melding of two nightmare worlds: the one comprising vigorously drawn seas with exquisitely rendered foaming waves, filled with floating – or drowning - refugees, the other being the darkest depictions of female drudgery; she spares us nothing in laying bare the thankless, gruelling, repetitive maintenance required in caring for children or elderly parents. Here, mothers, children and grandmothers are shown in positions of prostration, submission and exhaustion, in grotesque landscapes that speak of interior and exterior chaos. Tree roots and carpets writhe, chairs and tables topple. 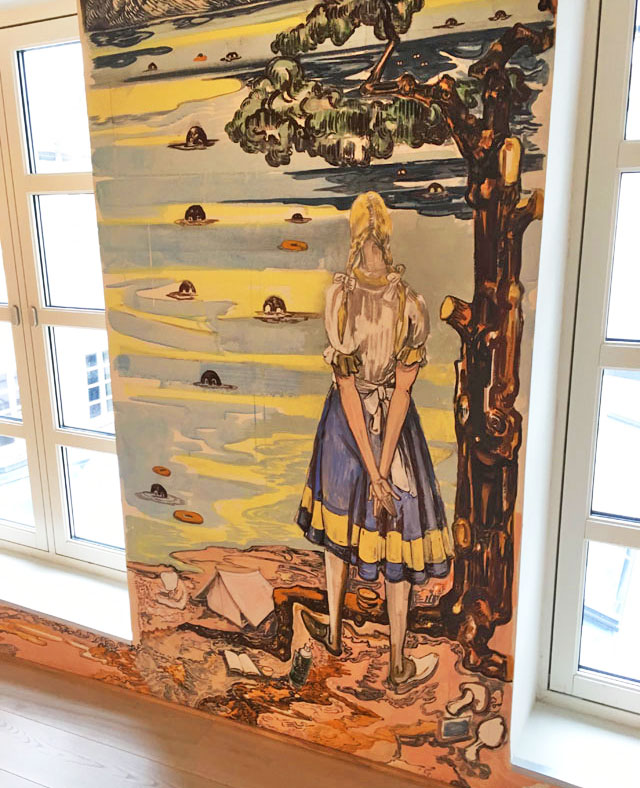 In this new work, Baird’s ever-present fascination with fairytales and myths – at least, the more sinister, psychosexual elements of these fantasies – takes new twists. She calls these combined works a “rant”. But the target of her anger and frustration is somewhat abstract. It isn’t her three children – who, if they appear, are shown as passive and doll-like. Conversely, it seems to be the fantasy characters conjured up from children’s bedtime stories or TV shows that spring to life, in often priapic animation, or sensual debauches; Little Red Riding Hood is depicted pleasuring herself while the big bad wolf lies in postcoital langour. The Smurfs make an appearance – though Smurfette, far from being the usual demure blue cutie, is swinging naked, boobs splayed, from the trees. SpongeBob SquarePants is also here, but covered in excrement, even glorying in the squalid stuff. There is a lot of excrement in these new drawings. It swirls around, blending with the watery/carpet landscapes, or is sprayed from the behinds of crouching females.

I ask Baird why there is this scatological new theme. Her riposte: “I had this idea of making a new book, 50 shades of brown.”

But if there is a purpose with this foray into faeces, its meaning is unclear. Is she simply trying to shock us? Is she thrusting this most base and smelly of bodily functions in our faces as the last taboo, in need of the bracing air of her frank, unblushing scrutiny? If so, it is hardly pioneering stuff. Gilbert and George were portraying turds and bum-holes in glorious Technicolor 30 years ago. Her fellow Norwegian Bjarne Melgaard – arguably, Norway’s most famous living artist – has taken us down this malodorous passage many a time; literally and figuratively. 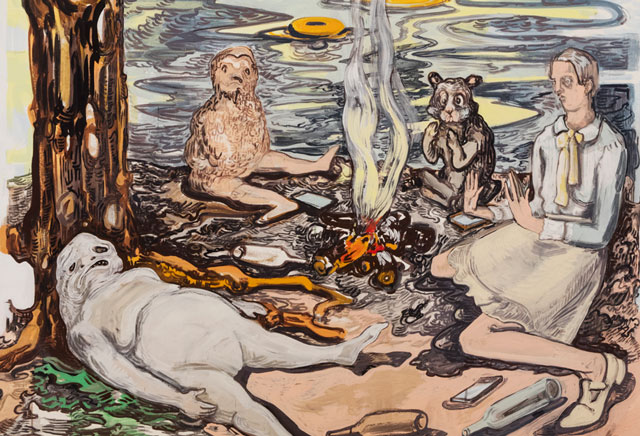 For good measure, Baird throws in a few pastiche paintings of idealised, romantic pictures of motherhood - a mother tenderly cradling her baby, a child’s portrait, all plump cheeks and dewy eyes – defaced with liberal dollops of dried and varnished brown stuff. She has said that her works, in the early years of motherhood, were very much a statement against the prevailing male imagery of parenting. But this dirty protest is surely too simple, too puerile a gesture.

However, the theme of effluence does unite the subjects in this room – there is certainly plenty of clearing up of effluence in the care of both the very old and the very young; the treatment of humans as so much effluent (in the case of the drowning refugees; or even the treatment of those who are lucky enough to wash up on shore alive) is a particularly poignant association; it suits the uneasy marriage of these landscapes, both the intense, confessional and intimate depictions of the home, and the brutal (albeit beautiful) vastness of the sea in which these helpless creatures float; their startled eyes and bobbing brown heads modelled on the discredited Little Black Sambo illustrations. I am struck, with these new seascapes, by the presence of small, beige circles, would-be lifebelts, which bear a strong resemblance to Cheerios; and cheerily they float, smacking of the first world’s predilection for easy but nutrition-free snacking, while far too small to be of any use to the refugees floundering around them. 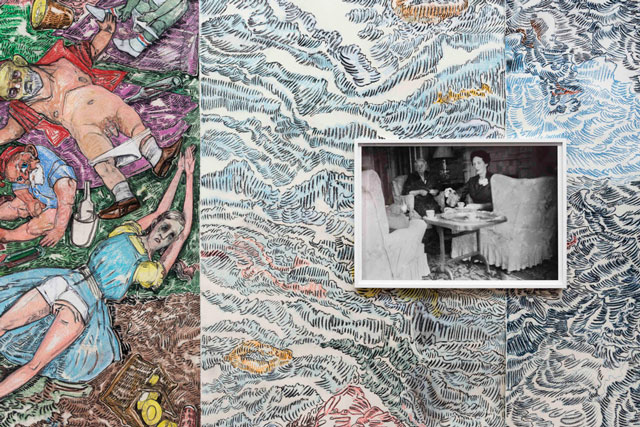 Baird is fearless in taking us to places we don’t want to go. This is true of her book projects – whether she is documenting, with a unique mix of brutal honesty and affection, her father’s slow death, from cancer, or making Grimms’ fairytales even grimmer. She weaves elements of everyday horror and beauty together with such skill that it forces us to pay attention. It was no surprise to be told that Tracey Emin, on a recent visit to Norway, saw and loved Baird’s work. But, like Emin, Baird’s autobiographical/confessional tendencies can drag her into dark corners that remain obscure to the external gaze, too specific, too self-indulgent. The use of fairytales or literary influences that are uniquely Nordic can be confusing. Paula Rego, for example, deals with similar subjects, in similar materials, but manages to build clear and compelling dramas, thanks to the archetypal power of her characters and arrangements.

“There was a lot of frustration,” Baird admits, while touring us around some of her more recent works. “I’m not that frustrated any more.” 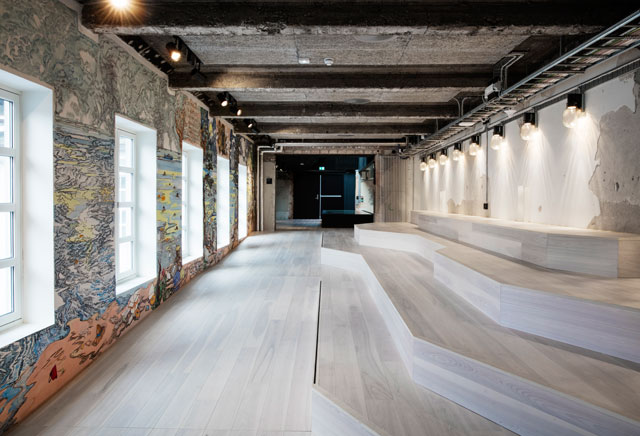 This confidence is visible in a new mural she finished this year in Sentralen - a vast, user-led arts space in the town centre, converted from an old bank. Here, she gives us more pastel-pretty seascapes, more bobbing, helpless refugee heads, more Cheerio lifebelts, but adds in a few cardboard boxes full of prized personal possessions - a reference to the controversial law brought in by the Danish government that allows it to confiscate asylum-seekers’ valuables to pay for their keep. These scenes are watched over by a strapping, blond Scandinavian maiden, all perfect plaits and pristine white blouse. And hovering, harpy-like, over the proceedings is Norway’s Conservative prime minister, Erna Solberg (looking like a monstrous matriarch from a Roald Dahl story), along with her immigration minister Sylvi Listhaug. 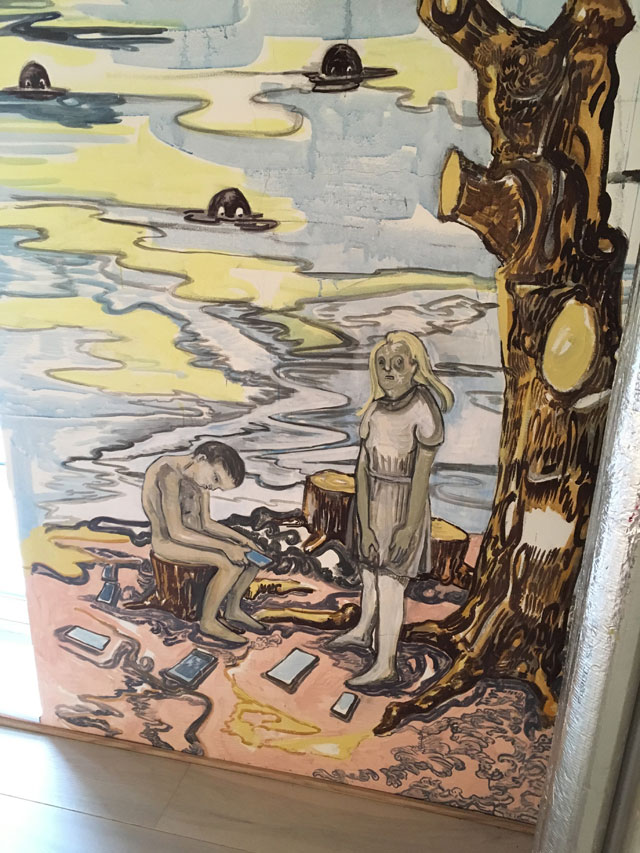 There is something brave about the themes to which Baird seems compelled to return – despite the flack she may take for doing so. In this mural, we have the frequently recurring floating pages, but we also have scattered mobile phones, a reference, she says, to the salvaged mobiles of the murdered teenagers from 22 July 2011, which are displayed in a case in the city’s new, and profoundly moving memorial museum, set in the building where the attack took place.

Whatever imaginative territory Baird enters, she likes to stay close to that very fine line between alienation and inclusion. 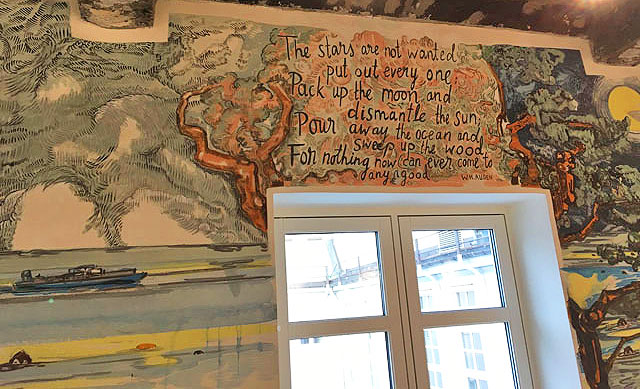 With these murdered children and their devastated families in mind, she writes in a few lines of WH Auden: “The stars are not wanted now; put out every one, / Pack up the moon and dismantle the sun, / Pour away the ocean and sweep up the wood; / For nothing now can ever come to any good.” An interesting choice for a lobby intended to be used as a place for informal meetings and brainstorming … But without darkness, can we truly appreciate the light?

There is light, and plenty of it, as well as darkness in the new commission Baird has completed for the Grand Hotel’s Palmen Restaurant. Called I am You are She/he/it is They are, it consists of 36 watercolour panels. With less introspective frenzy and a touch more wit and panache, she dashes off the customary array of haunted bedrooms, possessed fictional characters and demonic dolls, but there are also some gorgeous architectural and landscape works - a pulsating pink palace, a coral seascape, a moonlit landscape; magical tableaux that glow with richer than usual tones. It is great to see her allowing a change of pace and atmosphere, albeit rendered with her customary intensity and clarity.

As we left Oslo, Baird and her gallerist were preparing for a trip to New York, before her presentation at the Armory Show in March 2018. Whether the US will embrace the darkness in her tales – especially that busting of the sacred notion that motherhood is anything less than joyful – will be interesting to see. 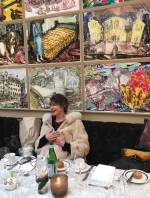 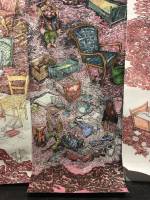