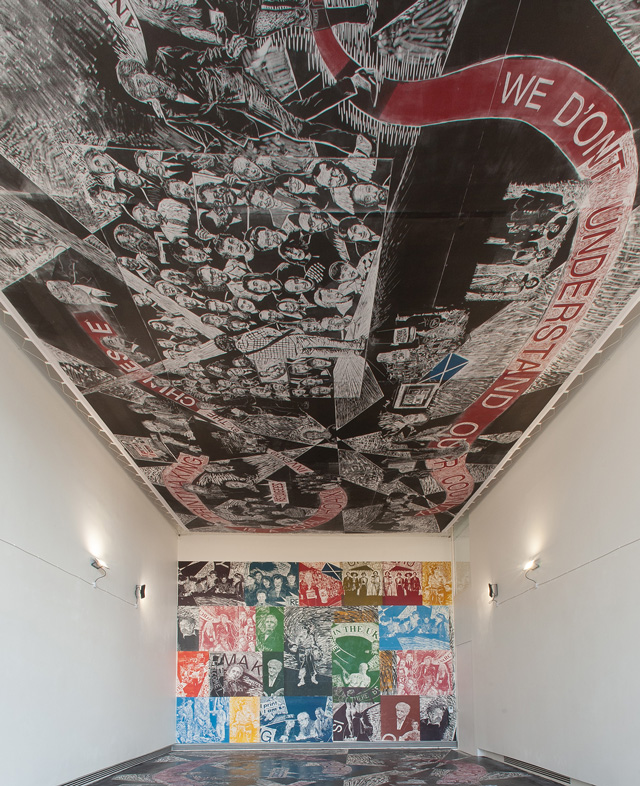 Thomas Kilpper: The Politics of Heritage vs the Heritage of Politics

Edinburgh Printmakers celebrates its new home with an exhibition by Thomas Kilpper, in which the German artist-activist takes on historical and political themes around colonialism and Brexit

Marking the opening of its new venue, a converted former rubber factory in Fountainbridge, Edinburgh Printmakers has unveiled a fascinating exhibition that interweaves the building’s heritage with modern political issues, as articulated by Thomas Kilpper (b1956, Stuttgart). By both celebrating and problematising the social history of the venue and the industry behind it, the artist-activist opens a public dialogue about how we interact with our cities and our heritage, and the implications for current affairs. 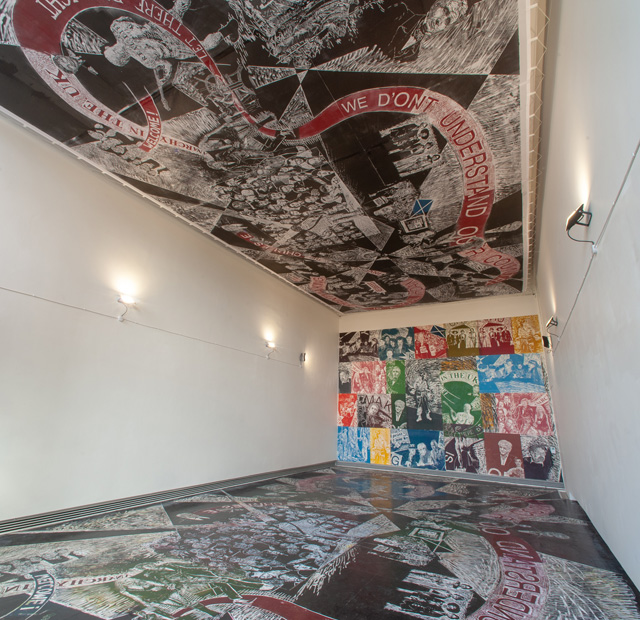 Installed in the new gallery space at Castle Mills, created as part of the huge renovation of the once-neglected factory, the work takes up the floor, walls and ceilings, filling them with images of modern politicians, historical figures and other key characters. The floor is covered in black, galvanised rubber, which acts as a plate for the printing of these images, which are carved into the floor itself. From Nigel Farage standing very close to Donald Trump, and Kate Moss (wearing Hunter wellington boots) striding by Theresa May, mid-dance, along with a chorus of infamous political figures, there is immediately an interesting sense of the mighty having fallen; they are at our feet, as we walk in and then over them, gradually degrading the plate itself as we do so, over the duration of the exhibition. 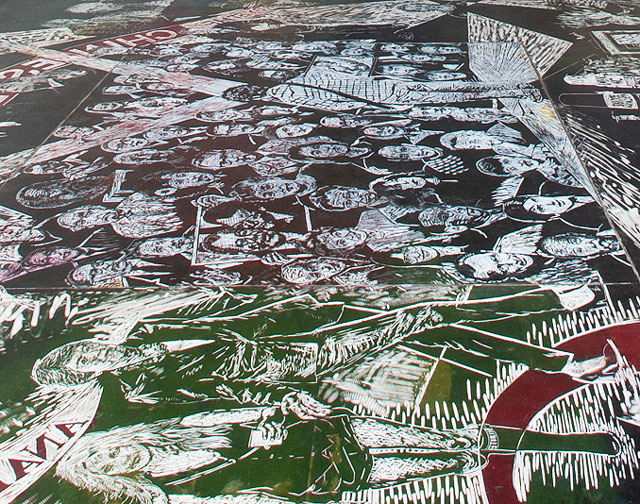 The same images also stand high above us and over us, though, in the prints on the walls and ceiling. In fact, it is impossible to get away from politics, here; we are contained in this black-floored chamber. There is inevitably, then, a sense of claustrophobia, reminiscent of the modern experience of current affairs. We may be able to trample all over Farage, but he is still underfoot, as well as stamped across the walls and hanging delicately from the ceiling. His image is inescapable. Politics more generally haunts us in this repeated, persistent, all-encompassing way. 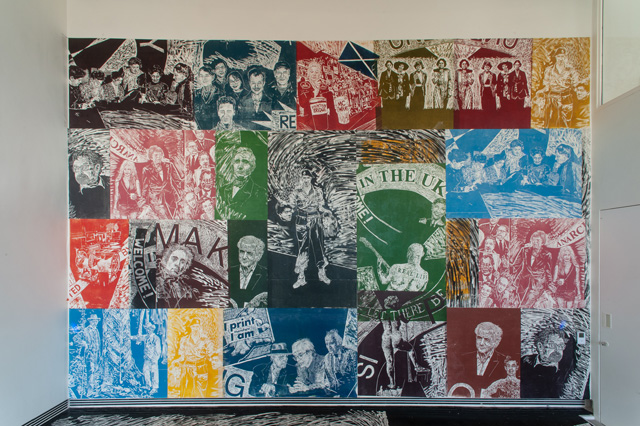 In addition to politicians, Kilpper also shows us images that relate to the social history of the building. Side by side with the figures of power are those who have lived and worked in this building. Kilpper has drawn on his research of the site as a rubber factory and then a brewery, undertaken during a residency in 2018. The vision, then, and hence the conversation it provokes, is a democratic, socialist one.

As the artist explained recently: “Across the world, decisions are being made by politicians that I think need to be challenged. Decisions on the environment, on coexistence and our way of living together. It is a phenomenon that societies are getting more polarised, rightwing parties reappearing and sowing prejudices and hatred against minorities, and politicians unwilling to protect the powerless in our society and instead promoting the interests of the banks and giant corporations.” 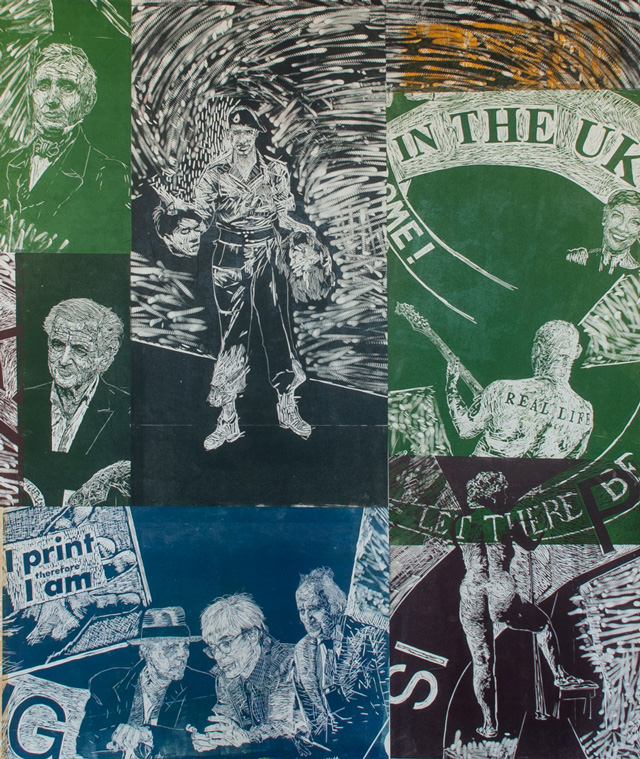 Stylistically reminiscent, in some ways, of socialist realism, and even Russian constructivism – with trade union-like banners and dramatic lines in red and black, blue and yellow – Kilpper’s exhibition, as well as celebrating the social history of the building and printmaking based in Edinburgh, provides a commentary on modern political issues, particularly the relationship between Scotland and Europe. The prospect of Scottish Independence, and associated ideas of colonialism and identity – whether ideological or national – come through in images of well-known and much-loved Scottish internationalists such as Richard Demarco, Sean Connery and Alasdair Gray, alongside local factory workers.

Kilpper also sheds light on the colonialist past of the British rubber industry, linking this to modern international relations. Exposing the atrocities that took place in Malaya as part of the imperialist project to take land in order to expand rubber production, Kilpper weaves these overlooked and often erased histories into official accounts communicated through mainstream British history and branding itself. The military background of seemingly innocuous products such as the wellington boot are also revealed in a tongue-in-cheek manner: Moss’s wearing of the (rebranded) Hunter wellington at Glastonbury is shown next to Theresa May’s (failed) attempt to rebrand herself and the Conservative party, as she is shown dancing on to a stage at the Tory party conference. In both instances, modern spectacles make a mockery of the legacies associated with the brands they wear. 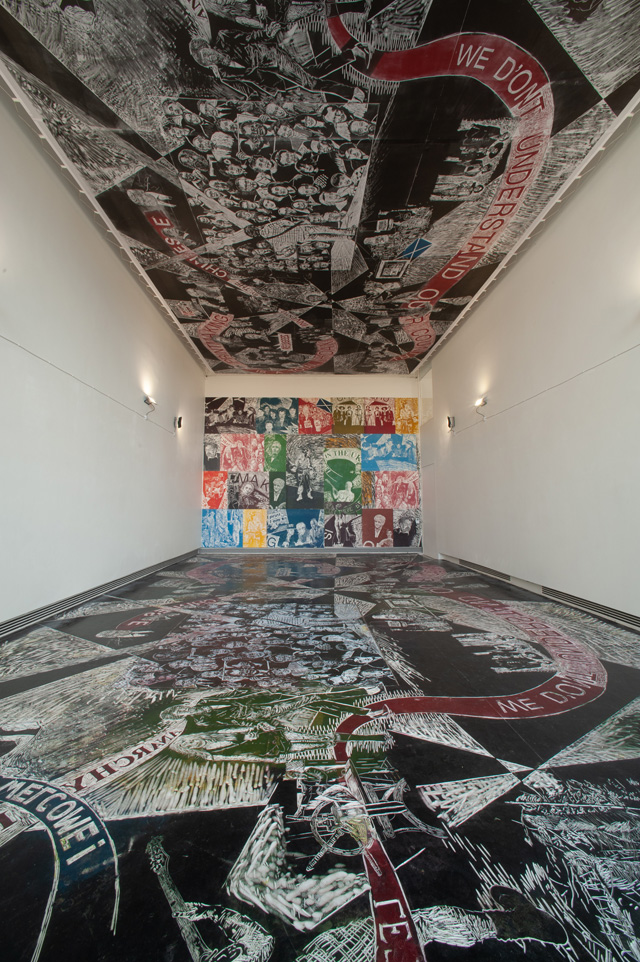 The idea of the political spectacle is particularly fascinating in this context, and it is key to Kilpper’s work. Here, the idea of an absurd and very political “show” is exaggerated by means of a window carved in the centre of the work – through which several German politicians watch the chaotic drama of Brexit unfold. By showing this perspective, which is shared in some ways by Kilpper – his studio is in Berlin, but he teaches in Norway – audiences, especially local ones, can gain insight into their own contested place in the UK, the wider world, and in history. Kilpper provides his own vision of a complex, conflicted history; like the process of printing itself, it is mirrored back to us, for us to see, consider and discuss. It is up to us, he also implies, as to how “history” is made and remade in the future: who we give power to, whose images we print and reprint, whose faces we forget or erase. This is a subversive and empowering work, and a reminder of the power of images and those behind them. Edinburgh Printmakers has begun its new era on an exciting note.