Joy Gerrard – interview: ‘I’m interested in how we witness and interpret these events’

Joy Gerrard – interview: ‘I’m interested in how we witness and interpret these events’

In her depictions of mass protests, Gerrard aims to make visible those who attend. For Protest and Remembrance at Alan Cristea, she focuses on anti-Trump and anti-Brexit marches

Working with hand-ground Japanese ink, Joy Gerrard (b1971, Dublin) makes small drawings and large canvases depicting bird’s-eye views of mass protests, here specifically anti-Brexit and anti-Trump marches from June 2018. Consciously working from media images – primarily stills from helicopter footage – which she collects in their hundreds, Gerrard selects those images that she will turn into her monochrome drawings, getting to know the image and memorialising it in the process.

From these, she then may select a couple to work up into a large canvas – using the same medium, but to very different, almost abstract effect. This time, she works from the drawing, concentrating on areas of tone and shade, creating a strong composition, built up in small sections. Overall, her aim is to make visible the masses who attend these protests, which she strongly believes can make a difference. Her work not only takes protest – and remembrance – as its themes, but it is, in itself, a form of protest. 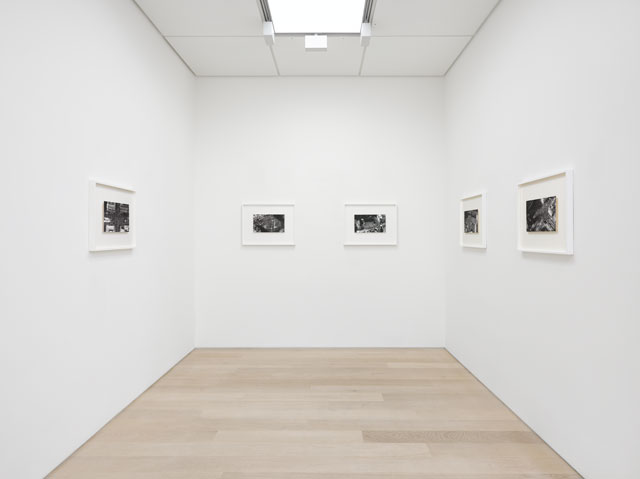