Grayson Perry: The Most Popular Art Exhibition Ever!

Grayson Perry: The Most Popular Art Exhibition Ever!

This exhibition delivers everything you would expect from the colourful Grayson Perry, but it is also a reminder that he is as much a part of the establishment as he is an original thinker 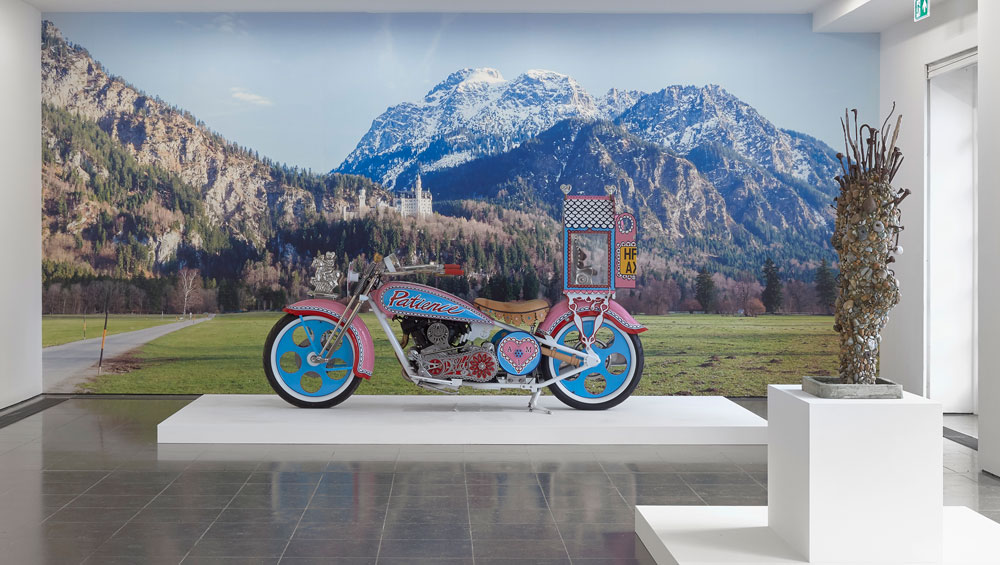 I like Grayson Perry. What’s not to like? He is engaging and playful. His alter ego, Claire, a doll-like man-girl who falls several cup sizes short of resembling a pantomime dame, has become a comforting presence on our TV screens (surely nothing bad can happen when Perry is wearing a bonnet). For those readers outside the UK, I should mention that he is not only an artist, but also a presenter. At the end of every programme, in which he interviews members of the public about issues such as gender, Britishness, and most recently, Brexit, he creates a work of art incorporating the people he has met, their views and their stories. In this way he is a self-made voice of the people, an artist-mediator between the public and the exclusive realm of the art world.

Perry wants art to be more engaging – and more engaged – with society at large, to be less insular, less “ethereal and inhuman”, as he puts it. And when it comes to artists who claim that money and prestige are not important (I have to admit, I haven’t met many – most live in the real world, after all), Grayson is open about not being one of them. He bats away academic pretentions and places value on aesthetic appeal and craftsmanship.

The title of this exhibition, The Most Popular Art Exhibition Ever!, is obviously tongue-in-cheek. “It made me giggle,” Perry says in an accompanying essay. But he knows, as an artist-celebrity, that his popularity will increase footfall to the Serpentine. “Popularity,” he says “is a serious business.” And when those visitors step through the door, the work that greets them is an enormous woodcut of Grayson as a hermaphrodite incarnation of Édouard Manet’s Olympia, complete with cat. Perry is playing with ideas of the artist as subject and with gender identity – his staple themes. He wants our attention and he has it.

The other woodcut in the exhibition, Animal Spirit (2016), is also deliberately provocative. A horned bear-bull with an erect penis stands over a naked infant. This is an image crammed with references to masculinity and death (a small figure hangs from a tree, crows sit on the beast’s back). The vulnerable child is being presented with the most masculine of things, a huge penis, like a grotesque mobile above a cot. The implication, I believe, is that the child is expected to grow up to embody the spirit of this beast, whose guts are labelled as “serious”, “reasonable”, “objective”, and “common sense”. As with much of his work, Perry is exploring the tensions between the “manly” exterior – the formidable, violent beast with claws and horns – and the more rational, nuanced interior that can seem at odds with the stereotype of masculinity.

Perry’s foray into the issue of Brexit, which aired on Channel 4 in May, examined the views of those who voted to remain in the EU and those who voted to leave. It concluded with the unveiling of two vases representing the opposing camps. The result, Perry believes, shows how much the two sides have in common – the vases are labelled as a diptych entitled Matching Pair. The “remainer’s” vase included a map of east London, the stars of the European flag, a woman cradling a cat, a portrait of the murdered Labour MP Jo Cox; on the “Brexiter’s” vase a portrait of the former UK Independence party leader Nigel Farage, a fat man in unzipped union jack Lycra, a jar of Marmite and the Cadbury’s logo. With politics in the UK more polarised than it has been for decades, this seems like a well meaning (if art world luvvy) attempt to bridge a widening gap. As Adrian Searle dryly put it in the Guardian: “It turns out both factions like tea and David Bowie. Gosh, we share so much.” But even Perry concedes that: “Brexit crystallised a chasm in our society that had been forming for decades.” And if nothing else, these vases will act as a document to future generations who will no doubt look back at this era and wonder what the hell was going on.

Another vase of yellow and pink pokes fun at the upper classes. Slogans such as “Rich people deserve equal rights, too”, “War and poverty are bad, I learnt that at university”, “I’m off to buy a very serious piece of political art”, “Super expensive knick-knack against fascism”, cover the vase. Inexplicably, there is also a swallow sporting a swastika. Perry’s ceramics sell at auction for tens of thousands of pounds. He is complicit in the world that he mocks, a beneficiary of those who fork out £80,000 for one of his vases. When it comes to money and popularity “some artists”, Grayson says “have often taken the self-designated moral high ground by claiming not to care … I am not one of them.”

Battle of Britain (2017) is an enormous three metre by two metre tapestry offering a dystopian view of the British countryside. Rows of dilapidated terraces back on to brown fields. In the distance, a figure stands over a bloodied body, a car burns, people camp under a bridge. Red graffiti declares a “class war”. But there is also a rainbow at the centre of no man’s land. Perhaps there is hope.

It all gets a bit more cheerful when Perry turns away from social issues to explore his inner life. His custom-built motorbike, painted in pink and baby blue acts as a portable shrine to Alan Measles, Perry’s deified teddy bear, which sits on the back, housed in his own little reliquary. An Alpine view provides the backdrop. Phew, we are out of Britain now. Opposite, the Couple Visiting Marriage Shrine (2017) is fun. Two figures, Perry and his wife, the psychotherapist Philippa Perry, stand side-by-side draped in tiny bead necklaces. It might smack of try-hard folk-art pastiche, with its distressed paintwork and scavenged offerings, but I quite like it nonetheless. It is a touching nod to the seeming magic of romantic partnerships.

But not everything here is so likable. There is a skateboard with the image of the Duchess of Cambridge painted like a brass plate of a medieval queen, complete with the infant heir to the throne. It is called Kateboard (2017) and it’s naff. I probably rolled my eyes when I saw it. Is Perry commenting on how the public sees Kate, how he sees her, or what she has become, what she represents as an icon of sorts? I honestly don’t know, but it seemed a bit lazy, a bit hackneyed.

Something else is baffling. Nearby, in a dark corner of the gallery, Perry has included some of his sketchbooks. Sketchbooks are such personal items that they usually only surface after an artist’s death. Perhaps it is all part of Perry’s self-documentation, a comment on the valued position of the artist. Here, he displays them propped open in glass vitrines, flanked by curious videos on iPads of hands wearing archivist’s gloves that reverently turn the pages. I have seen 1,000-year-old manuscripts handled with less care. I can’t help but wonder whether this is a tongue-in-cheek reference to the treasured relics of an artist’s life. I imagine so. But with Perry, it’s difficult to know sometimes. 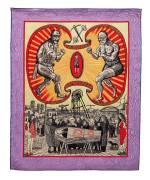 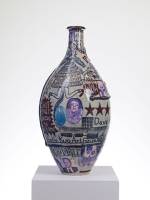 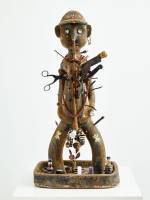