Toronto-based artist couple Matt Donavan and Hallie Siegel explore the history of changes in communication technology in their multilayered artworks derived from research and conversation. 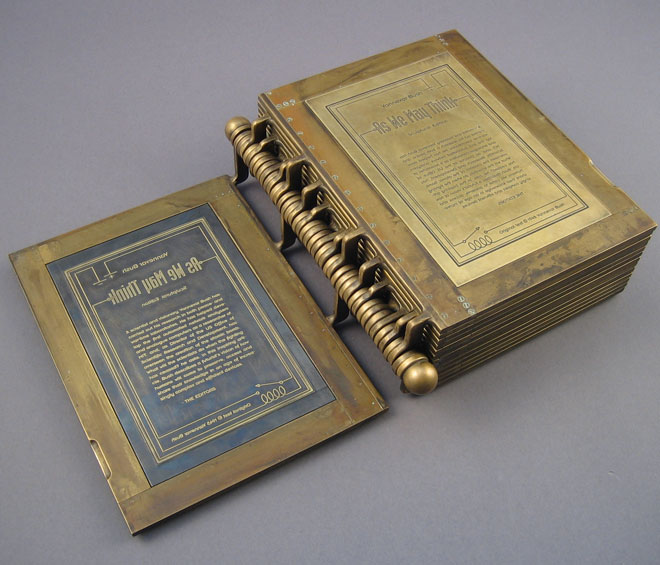 During their residency at Edinburgh Printmakers, Toronto-based artists Matt Donovan and Hallie Siegel, known collectively as Donovan & Siegel, investigated how typefaces have been adapted from letterpress printing to digital, looking particularly at how a curve can be rendered with pixels. The creative duo are interested in print culture and text in all its different forms, including essays, poetry and fiction. The exhibition presents works made as an outcome of the residency and also earlier works that examine the shift from spoken to written language.

Donovan & Siegel’s interest in historical advancements in technology has been informed by the amount of change happening in contemporary society. Siegel says: “We’re interested in how we are going through a major shift in how we are experiencing communication through smartphones, VR [virtual reality], AR [augmented reality] and all of that. How we feel about those changes and how we handle going through that change is partly informed by how we have handled major shifts in our communication in the past, so we are really looking at things like the transition from orality to written language, and written word to print, as being major cultural shifts.

As well as being artists, Siegel is a communications professional and a science editor, and Donovan is an industrial designer. Their combination of interests and skills create an ideal meeting point for discussion, and they also collaborate with other creatives and professionals, such as bookmakers and poets. At Edinburgh Printmakers, they had the opportunity to work with studio director Alastair Clark and printmaker Jessica Crisp, learning about printing techniques and effects. “We had two weeks to dive into the language and conventions of printmaking without having to become experts in every step,” says Siegel, who explains how the residency allowed them to understand the process of printing better, while also giving them creative freedom to experiment conceptually.

One effect interested them more than any others, leading them to develop new work. Siegel says: “When you do printmaking, you’re impressing something physically on a page. The paper itself can be quite toothy, but where you push the paper in, it can become very smooth, so you get these texture changes. We explored that quite a lot in some of the new work. We played on this idea of the textured grittiness of the paper and the pressed part being this smooth, screen-like feeling, as if the page is melting into the computer monitor.”

For the new works, Alias and And So It Goes (both 2016), Donovan & Siegel used this effect to create a sculptural surface of impressed and embossed squares on the paper, exploring how curves featured in traditional typefaces are rendered in pixels on the computer screen. The technique for making a digital typeface appear as near as possible to its traditional printed form is called “anti-aliasing”, which is what inspired Donovan & Siegel. Donovan says: “The kernel going into And So It Goes was thinking about that process of creating strategies for anti-aliasing fonts so that they look better on a computer screen, and contrasting that against the history of printmaking. The first fonts were really designed for letterpress printing, and it was critical to have that emboss around the anti-alias letters, so that you have that play between the digital representation, but also the history of how we supress this into the page.”

The formation of the text in And So It Goes is taken from the anti-aliasing process. Pixels are refined down to smaller sizes closer to the edge of the curves of the letters, and the use of different shades of grey helps to render the curve more smoothly from afar. Yet the closer you move towards the individual words, the more blurred the letters become as the pixels emerge and the grey squares separate from the black, until, when you are standing in front of the work, the curve becomes completely deconstructed and the appearance of the digital curve is broken.

In Alias, we see the opposite effect – raised blocks and smooth pressed paper create the outline of the word “alias” across three pieces of paper. The block squares vary in size following the anti-alias technique of refining the size of the pixels to create the curve. The raised shapes are a reminder of the familiar mid-90s Windows logo (and browsing the internet on a dial-up connection for a limited amount of time in the evenings). Siegel also feels a sense of nostalgia, creating these works across decades of change that the pair have experienced themselves: “Matt and I were born in 1974, and we grew up in the 80s with the Commodore 64 and Pac-Man and all these early video games. Those were the first computers we were playing around with – everything was blocky and chunky and pixelly, and it is just a very different aesthetic.”

Travelling back in time to another decade, Self-Printing Book (2004) brings us to 1945, when Vannevar Bush, the then director of the US Office of Scientific Research and Development, penned an essay challenging scientists who had been involved in the application of science to warfare to direct their postwar activity towards advancing communication. The essay was printed in the Atlantic Monthly. Siegel became aware of it while studying communications at university; it was a seminal text that envisioned the future of computer science, including technology such as hypertext and the internet.

The artists wanted to find a way to convey the idea of the text through the object itself, so they chose to print it in an unconventional way, in a thick, heavy, brass book. Donovan says: “We see the book as a tomb and a tome. It feels like this medieval artefact, but, inside, it is also a work of science fiction so it has this nice back-and-forth play with one step in the past, one in the future.”

The book is beautifully smooth, and heavy, with its double-page spreads carved with a print and an imprint of the text. The pages fit together like a puzzle, as if the book is printing itself. Siegel says: “If you imagine that this article was published in the Atlantic Monthly in 1945, it would have been essentially printed using a sped-up version of the Gutenberg press, the printing technique that had been used for hundreds of years. The vision of this article rolling off the press that day, and how it was almost like the printing press announcing its own demise, left this very palpable vision.”

As well as longform text, poetry is another form of writing that interests Donovan & Siegel. The work Haikube (2005) is a “poetry generation machine” and a unique hybrid of a Rubik’s Cube carved out of ebony wood. The piece is also a printing device inspired by Japanese woodblock printing, which prints thousands of combinations of haikus at the twist of a wrist, some of which are displayed on the walls of the gallery.

To create the haikus carved across the six faces of the cube, the artists worked with Canadian experimental poet Gregory Betts. Donovan says: “We gave him the constraints and some loose guidelines. We wanted to reflect print culture and the act of printmaking, but also change, play and mutability.”

Siegel adds: “And he really did play off that. He is also interested in the written form of poetry and the spoken word. If you read some of the poems, they are all tongues and open mouth, very oral and performative, and others feel more cerebral, such as, ‘As death is final we strive to elude it’. That is really about why we print things in the first place, which is in some ways how we preserve our thoughts for ever – even though we won’t live on for ever.”

They found that the format of constraint-based poetry worked in tandem with the Rubik’s Cube. Donovan says: “Here you have a device that’s very constrained and has a very predictable way of moving, and the Rubik’s Cube is an object that sits more inside the discipline of mathematics than art, so it was interesting to come up with something that had all these constraints, yet on another level became completely about change. The Haikube is a poetry-generation machine, so you don’t have to solve it back to the original poems, you can write your own poems with it. That duality is kind of fascinating, and working with constraint-based poems, coming up with a prescribed set of rules – there’s something very fascinating about that move back and forth between rigid and creative. And, ultimately, maths isn’t mutually exclusive from art, and that’s probably what, at an intuitive level, we are interested in.”

So after all their cross-disciplinary research and dynamic thinking, have they reached any conclusions about how we respond to changes in technology? Donovan says: “The only conclusion we reached is that there’s always angst and uncertainty as things change.” Siegel adds: “… as well as hope and ambition, as that goes with that, and we are really interested in that tension between those two.”

Siegel uses the example of their work Impressions (2005) to illustrate this. “Print and the written word are so prevalent and ubiquitous now that it’s hard to imagine what it might have been like to encounter them for the first time, but historic texts like Phaedrus which we used in Impressions can help us to see both the anxiety and optimism that surround disruptive technologies in a more tempered light.” In the work, two magnesium plates fold out like pages in a book, inscribed with an argument between Theuth, the Egyptian god of writing, and King Thamus, king of Egypt, written by Plato in 370 BC:

Theuth said: “My greatest discovery is the use of letters. They will make Egyptians wiser and give them better memories: they are a specific both for the memory and for the wit.”

Thamus replied: “Your discovery is an aid not to memory but to reminiscence: it will create forgetfulness in learners’ souls. Your disciples will trust the written characters, and not remember for themselves: they will have the show of wisdom without the reality.”

Theuth is positive, whereas Thamus is sceptical about the introduction of written language into society, which ultimately completely changed the way we communicate. Siegel says: “I think that same angst is something that we are experiencing now, with all the amazing things about the global village, interconnectivity and social media, that lets us all be close together, but other people are very anxious about how social values are getting eroded – so it’s one or the other.”

The artists’ collection of surreal inventions are the material products of their dynamic conversations about the history of technology, and, as well as being physically intriguing hybrids, each object also opens up a conceptual discussion to the audience about how these changes across history have changed us socially. Technology has defined our childhoods, our careers, our relationships, yet for better or for worse? Are you a Theuth or a Thamus?