Dulwich Picture Gallery shines a well-deserved spotlight on an almost-forgotten era of future-facing printmaking, which adroitly captured the thrill of modern urban life

British art is not known for a wholehearted embrace of the modern. As the Italian futurists glorified the erasure of history and the birth of a new machine age, Jacob Epstein spawned his terrifying Torso in Metal from Rock Drill (c1913-16), a merciless cyborg that he later called “the armed sinister figure of today and tomorrow”. As the country sensed its world-ravaging Victorian heyday was almost over, the future seemed less marvellous than millenarian. After the calamity of the first world war, many British painters turned inward, whether through Paul Nash’s geometric surrealism or Vanessa Bell’s essentially post-impressionist portraits.

Relatively little in the country’s visual art matches the avidity for the rhymes and rhythms of the modern city demonstrated by its literature, and perfected by Virginia Woolf in Mrs Dalloway (1925): “In people's eyes, in the swing, tramp, and trudge; in the bellow and the uproar; the carriages, motor cars, omnibuses, vans, sandwich men shuffling and swinging; brass bands; barrel organs; in the triumph and the jingle and the strange high singing of some aeroplane overhead was what she loved; life; London; this moment of June.” 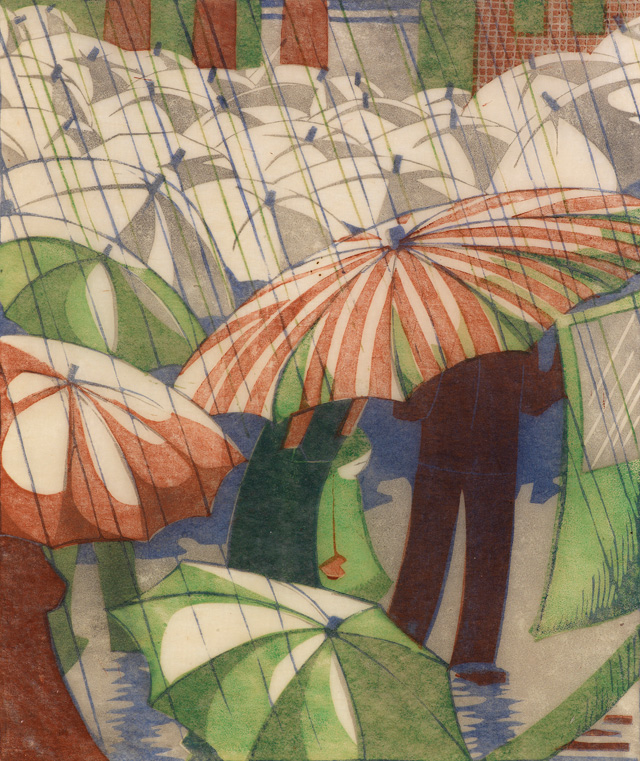 A new exhibition at the Dulwich Picture Gallery shines a streetlight on an oft-ignored band of artists who did, fleetingly, capture this thrill. It shows, as in William Edward Greengrass’s Jazz Musicians (1933), the heady zest of a newly popular form of music, here embodied by identical musicians sublimated to the sound itself. In Ethel Spowers’s Special Edition (1936), we see dozens of city dwellers digest the newspaper announcing Edward VIII’s abdication, watched over by a traffic light. Leaning more towards the semi-abstraction of cubism, Sybil Andrews envisaged Hyde Park (1931) as a swarm of to-hatted strollers refracted into the greenery, while her platonic companion Cyril Power added a dash of the surreal to his picture of an Exam Room (1934), where red-faced candidates sit under glaring lamps. Squint, and the lamps could be eyes. 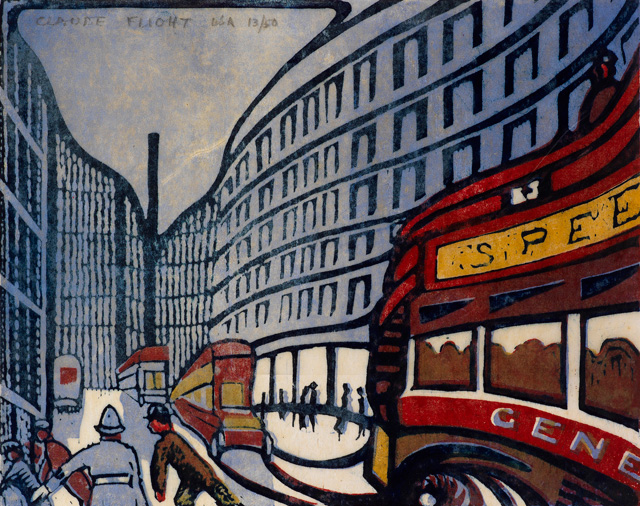 Cutting Edge: Modernist British Printmaking spins the yarn of a motley band of artists, who were united not just by their ludicrous, Evelyn Waugh novel-like names but by their association with a single institution and their use of a single, relatively newfangled technique, linocut. Linoleum, a compound of cork and linseed oil on a canvas backing, was invented in the 1860s as a hardy and cleanable surface for household flooring. In Germany, in the first years of the 20th century, Wassily Kandinsky and August Macke pioneered the use of linoleum in printmaking as a cheaper alternative to woodcut. Designs are cut, gouged or chiselled in before the sheet is inked with a roller, then impressed on to paper to create the print. The softness of linoleum allows for greater flexibility of mark than the harder woodcut, allowing for the creation of lighter, grainless images.

Britain was characteristically slow to catch on. The breeding ground for its flourishing was the Grosvenor School of Modern Art, in Pimlico, London. Established in 1925 by the wood engraver Iain Macnab, it dispensed with conventional pedagogic dogma in favour of allowing students freedom to explore their individual interests. The Anglo-French artist Claude Flight was appointed as printmaking tutor in 1926, to be joined later by Power as architectural drawing teacher and Andrews as secretary. Flight’s students included Greengrass, the Swiss artist Lill Tschudi and a trio of Australians: Spowers, Eveline Syme and Dorrit Black. 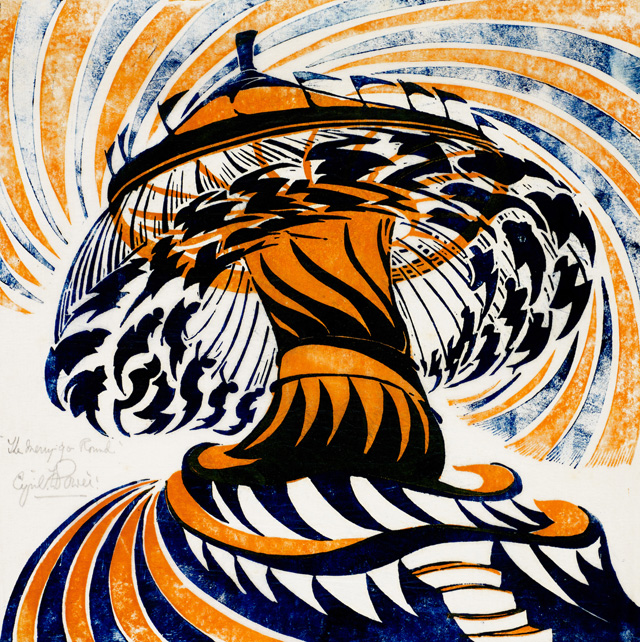 Each has their own characteristics. Flight is distinctive in his choice to limit his palette of colours. An early example, Speed (1922), shows a red London bus streak down a pale blue Regent’s Street, as if in soft winter light. Andrews, meanwhile, went in for lavish patterning: Fall of the Leaf (1934), a gently curving rural idyll, catches the exact palette of early autumn, while her envisioning of two Flower Girls (1934) uses bands of yellow and red to render her subjects’ sun-dappled wicker baskets. And Power, more than anyone, was fixated by movement. His blue and orange vision of a Merry-Go-Round (c1930) transforms the fairground stable into a whirring, spinning top, so fleet you can’t imagine it ever stopping. 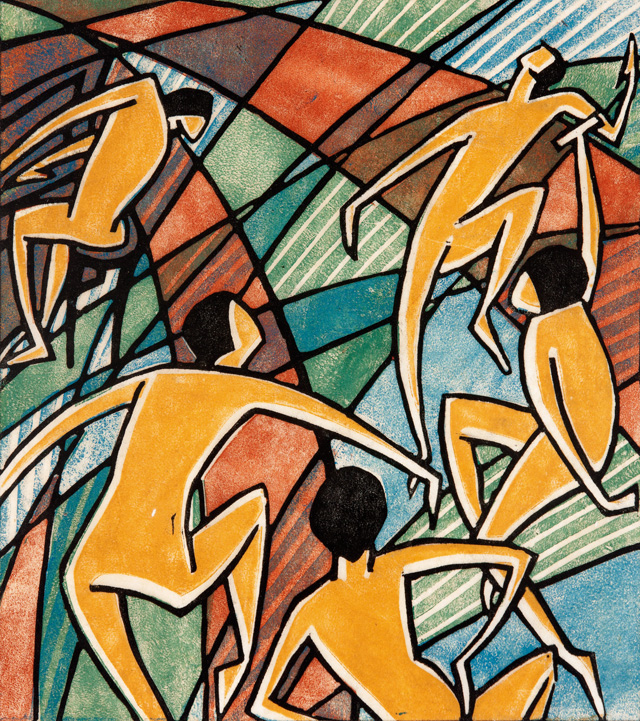 If there was one mechanism that came to epitomise the technological heat of the day, it was the underground, which, in 1933, went from a loose network of competing lines to a unified public service. Zipping through the deep-level tunnels could be a white-knuckle ride. “Everyone waited,” wrote Elizabeth Bowen, with wry nonchalance, in The House in Paris (1935): “for the train to impale them on London.” Andrews’ Straphangers (1929), which shows commuters curl around in an elliptical arc, incarnates this frenzy without revealing the train itself. Four pencil studies by Power see the elevators at Tottenham Court Road as skeletal mouths of hell, about to swallow commuters whole; I think again of Woolf, this time in The Waves (1931): “The descent into the Tube was like death. We were cut up, we were dissevered by all those faces and the hollow wind that seemed to roar down there over desert boulders.” But when Power’s images were translated into linocut, as Whence and Whither (1930), this dark architecture becomes softened by colour, the arches of the roof almost comforting, though the rows of commuters remain a faceless horde. 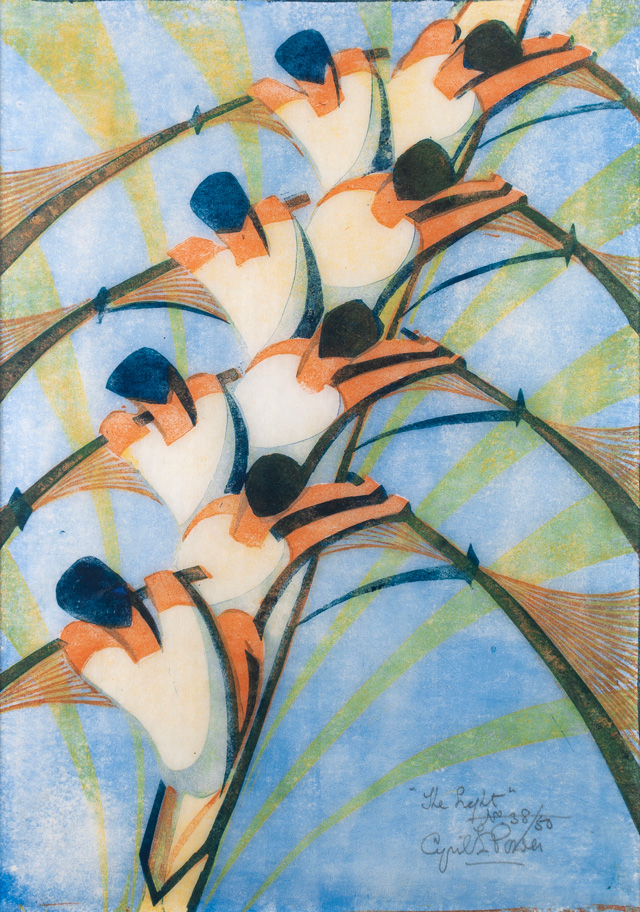 Locomotion was not the only form of movement that appealed to the Grosvenor School. One room at Dulwich is given over to their almost encyclopaedic depictions of sporting pursuits: running, horse-racing, motor-racing and innumerable ball games. Power was particularly adept at turning physical exertion into an exhilarating sign of the new freedoms afforded by leisure time. Tennis (1933) becomes a watery dance of fluid bodies, its too-close players scooping their rackets with quicksilver celerity. In The Eight (c1930), meanwhile, he turned rowing into the seeds of a Busby Berkeley spectacle, rowers peeling off from the boat like petals. 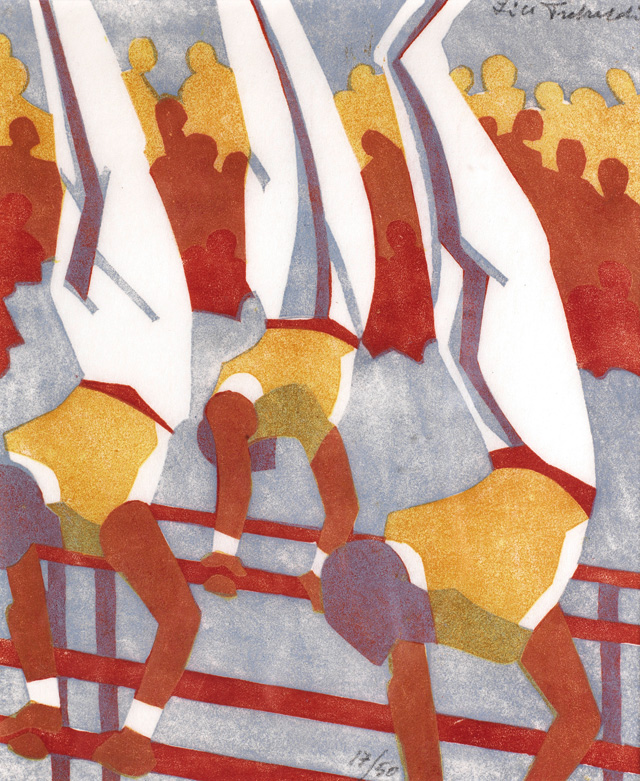 The joy in these scenes makes it easy to forget that these artists were working during the parched days of the Great Depression. The Grosvenor engravers, unlike fascistic Italian futurists or Hitler-praising Wyndham Lewis, had a gentle egalitarian ethos; their linocuts were meant to be art for the common man, although at £2-3 a print the economic realities did not quite accord with their intentions. Indeed, for all their interest in exulting in contemporary life, the subjects of Cutting Edge have a tantalising head-in-the-clouds aspect, as a cabinet of photographs and newspaper clippings at Dulwich demonstrate. Flight spent part of the year on the banks of the Seine, living in a cave that sometimes flooded; a photograph from the early 1930 shows him semi-nude with a band of friends, as if enacting a pseudo-Edenic masque. Another shows an almost as scantily clad Power next to a tent in the New Forest, blowing on a flute like some pastoral piper. 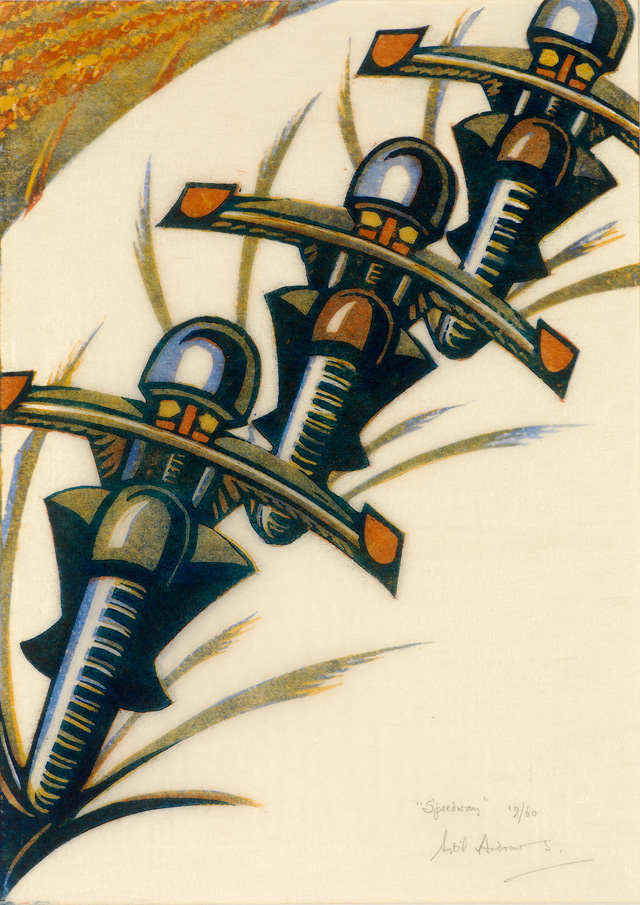 Arcadia could not last. By the end of the 30s, Flight’s output had slowed down to a crawl; he would later loose his prints under a Blitz bomb. Power and Andrews, whose intense bond had created the moment’s greatest artefacts, left London, with the latter eventually enjoying a long career in Canada. The students dispersed, and before long their aesthetic was branded old hat. Today – give or take the occasional spectre of Keep Calm and Carry On, what Owen Hatherley has called “austerity nostalgia” – they feel bracingly modern, or modernist. But in imparting a poetry into the quotidian, they offer far more than just a portrait of their time. Kudos to the Dulwich Picture Gallery for bringing them back into the light. 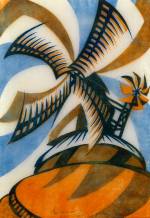 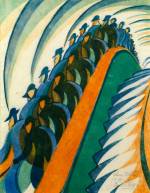