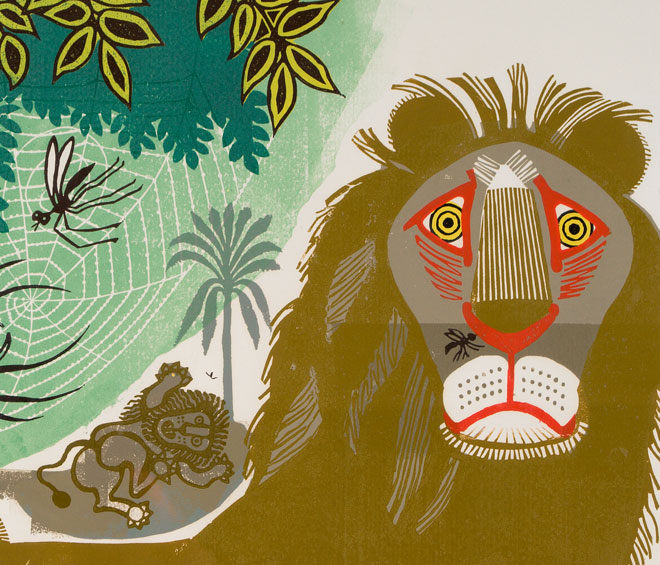 If I believed in the business of astrology, I would say that the planets aligned in 1903 to bring us some of Britain’s most treasured 20th-century artists. For this was the year that Barbara Hepworth, John Piper, Eric Ravilious and Edward Bawden were born. Bawden and Ravilious met on their first day at the Royal College of Art and became firm friends until Ravilious’s early death in a plane crash in 1942. They were tutored by John Nash, whose graphic style trickled down to his students, but Bawden’s own inventive approach came to define the commercial art of a generation. It is that originality that ties together Dulwich Picture Gallery’s colourful exhibition with work spanning his career, from early film poster layouts to confident and ingenious designs for London’s museums.

Bawden’s early works were bustling compositions packed with detail. In 1924, aged just 21, he was commissioned by London Underground to create a map of the British Empire exhibition. It is a ludicrously intricate jumble of people and animals, showcasing everything the empire had to offer, and could almost be a prototype for one of Grayson Perry’s tapestries, although conspicuously lacking in social commentary. Perry, coincidentally, was a paperboy in the village of Great Bardfield where Bawden lived. And Bawden, too, designed tapestries. One such example, commissioned in 1977 for the tercentenary the following year of the publication of The Pilgrim’s Progress, breaks John Bunyan’s story down scene by scene in a layout inspired by the board game Snakes and Ladders. You can follow the protagonist’s perilous route, marked out by a red path as he traverses mountains and escapes from some fantastical beasts. Bawden was extremely skilled at conveying entire narratives in one image – he liked a challenge – and his solutions are marvellous fun. 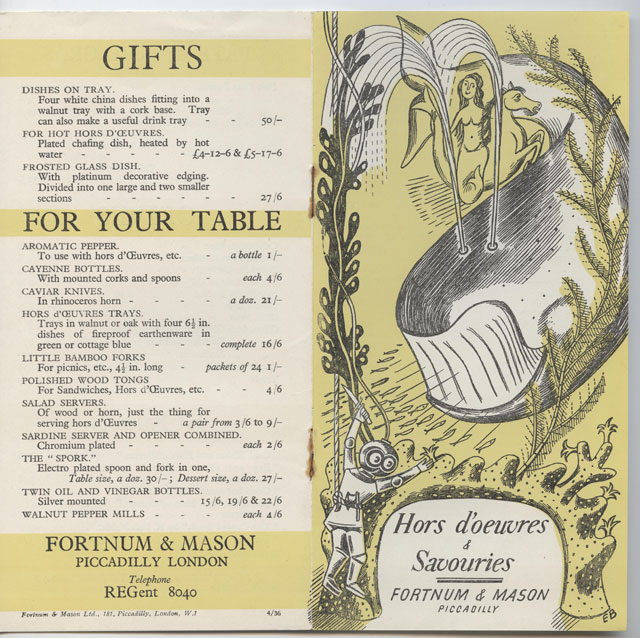 This playful side is central to much of Bawden’s work. Francis Bacon’s Garden (1928) is a delightfully stylish piece with humour running throughout. You can follow the multitude of paths to find gardeners stooping to their work, or lords and ladies milling around the follies and flowerbeds. At the bottom, a commoner, barely more than a stick figure, but full of character nonetheless, walks his dog, and a ploughed field in the corner hints at a whole world beyond the privet hedges. Bawden loved gardens and was a keen gardener himself. He illustrated recipe books and treatises on growing herbs and satirised both horticultural and village life, in which, we are told, he and his wife took “a lively interest”. 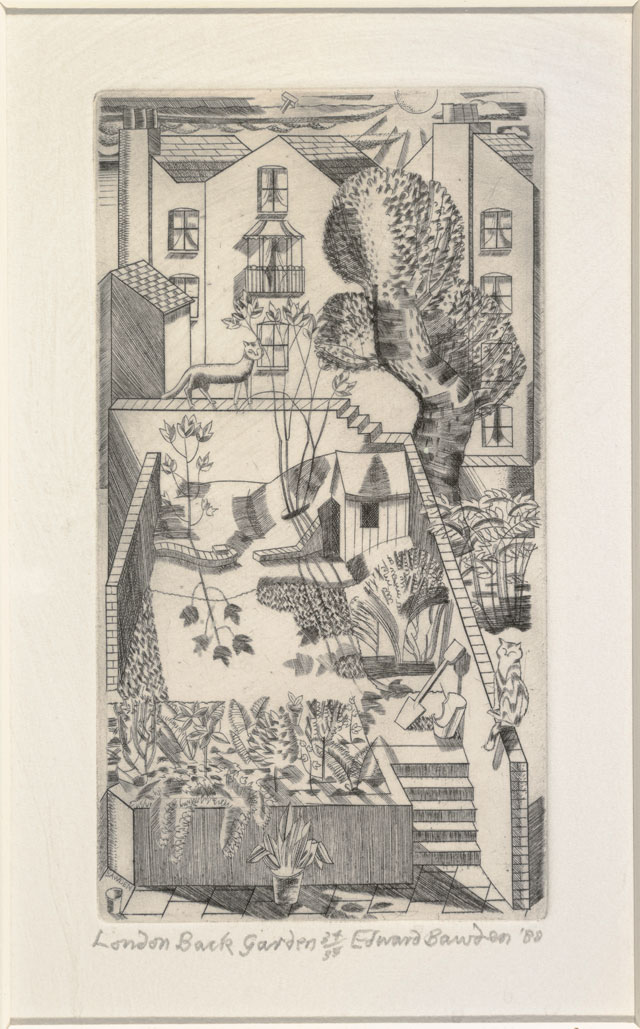 But there was more to Bawden than whimsical illustrations. In 1939, he was appointed as an official war artist and catapulted from his comfortable life in Essex to a five-year tour, which included Egypt, Libya, Lebanon and Iraq. Before this, we are told, he rarely drew a figure bigger than a matchbox, but in his new role he gained confidence in portraiture and produced some intuitive paintings of the people he met, from sheikhs to private soldiers and labourers, carefully noting down their names and occupations, determined that they should all be recorded as individuals, rather than archetypes. What Bawden does so well here is capture both character and context. And these are not cold likenesses, either, but truly sensitive, if at times slightly stiff, portraits. 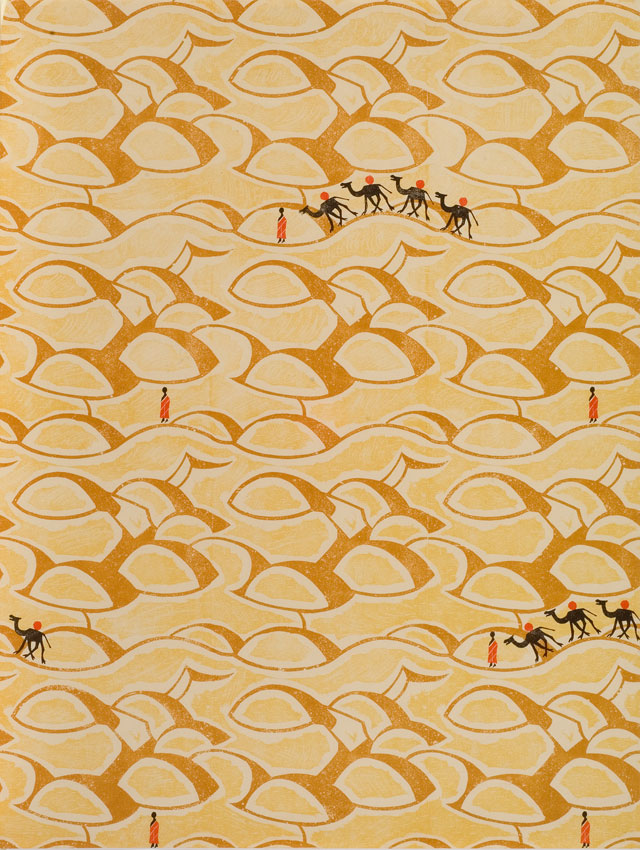 His interest in rural Essex, in the churches and quiet lanes, are explored here under the title “Spirit of Place,” where the English countryside is imbued, sometimes with dark Piper-esque undercurrents, and sometimes with the lighter touch of Ravilious. March: Noon (1936) looks like a forebear of David Hockney’s paintings of Yorkshire, with uncomplicated green-trunked trees lining roads that peel off in opposite directions. It is a wonderful lesson in the development of modernism and the British landscape. And he was not afraid to experiment with texture, scratching into paint to add highlights to foliage or trying out compositions with collage. 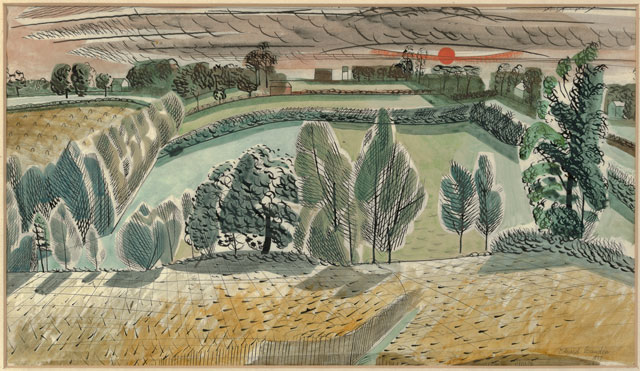 The last room is a celebration of Bawden’s whimsical side, bringing together a career’s worth of cartoons and illustrations. Here, we find his colourful interpretations of Aesop’s Fables, cartoons for Twinings tea and posters for the Natural History Museum. Again, Bawden’s ingenuity and sense of humour shine through. The Dulwich Picture Gallery does these exhibitions exceptionally well, bringing out the personality of the artist in an engaging and vibrant way, quite literally wallpapering the walls with designs. Just as with the Tove Jansson show last autumn, it is a broad, lively examination of a life’s work. And it is an exhibition of much more depth and variety than I was expecting.