Eric Ravilious, the renowned English painter of the pre-war decade, was killed in 1942 aged 39 while on active service as War Artist with the Royal Air Force, off the coast of Iceland. This may be one reason why this erstwhile friend and contemporary of Henry Moore became gradually marginalised. However a new and superbly curated exhibition is now on in London (accompanied by an excellent and informative catalogue) which does Ravilious full justice. We see the masterly development of his painting over the period from 1930. 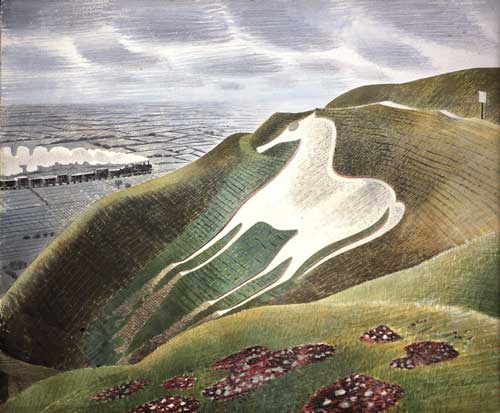 Dr Alan Powers, the curator of the exhibition, is wise in his catalogue introduction not to eschew the context for Ravilious' watercolours, and tellingly offers a reference to a view expressed by Clement Greenberg in interview (Studio International, Vol 175 No 896, January 1968) with Edward Lucie-Smith. Greenberg is prompted to elevate the English watercolour context historically, as distinct from 'the Grand Manner', which Greenberg found detrimental. Mischievously, he was tempted by contrast to that tradition, to include Henry Moore in that sweep, 'in my opinion Moore is a minor artist. His best work was done before 1940'. Conversely, said Greenberg, 'if you can't see how good the English watercolourists are you can't really see painting'. Dr Powers was right to include this context, and surely Ravilious formed part of that English tradition, rated highly among his peers. Ravilious was noticed early, praised in a 1924 review, Student's Work, at the Royal College of Art (The Studio, Vol. 88, p.203 15 October 1924 article by SB Wainwright). This new, scholarly exhibition at the War Museum now pays fitting tribute to a prodigy still little known in the post-war decades, and not yet recognised in full, a modernist in attitude and yet also forming part of that continuing tradition espoused by Greenberg.

Ravilious grew up in the South of England, and in 1922 won a scholarship to the Royal College of Art. From there, where he completed the course in two years, he was awarded a travelling scholarship to Italy. It is surely possible, as Dr Powers points out, that there he absorbed 'the cool planar structuring of Piero della Francesca'. He returned to the RCA again in 1925, and was fortunate to have Paul Nash, then a part-time tutor. Ravilious became established rapidly as a muralist of striking originality; his mural for Morley College (1928-1929), sponsored by Sir Joseph Duveen, achieved prominence. At this time Ravilious struck up many friendships within the architectural community, such as the young editor of the Architectural Review, James Richards, as well as with the architects Serge Chermayeff and Maxwell Fry. Ravilious' own sensibility was modernist, as Powers points out, but his techniques and subject matter were not. As Andrew Brighton has said (selectively quoted by Powers here), 'Modern serious art is not confined to Modernism'.

We look back today over 70 years to Ravilious' delicate structuring of planar landscape scenes in watercolour (typically 'Firle Beacon, Sussex' from 1927). He also had a notable, rare proficiency and poetry in the depiction of interiors, which yet remain invitingly private 'Farmhouse Bedroom' (1939) seems especially so with its double bed compellingly inviting. The view from a train compartment, with the White Horse chalk image through the window (Train Landscape, 1939), makes the train seem infinitely more real, complete with an emboldened '3' for third class denomination. Likewise the Museum's own 'Royal Naval Air Service Sick Bay, Dundee' (1941), conveys succinctly the idea of a defenced sanctuary calm, echoing the Sea Walrus aircraft riding at anchor on the estuary seen through the window.

And so to Iceland. James Richards (at whose flat Ravilious spent the night before going up to Scotland prior to Iceland) recalled that Ravilious seemed 'more tranquil in his mind than he had been throughout the preceding years' with 'a sense within him that he had come to the end of what he had to do'. This was a prescient observation and it was known that Ravilious found middle-aged painters - this group he was not himself to join - 'depressing'. So, Ravilious remains one of the best kept 'reservations' of the earlier 20th century: superlative technically in oil painting, woodcut, or mural as well as in watercolour, his preferred medium. The way through the 1940s, post-war or whatever, seemed less than clear to him. Today we can see all the more so how Eric Ravilious somehow encapsulated the ethos and the economy of a lost society, transitory, obscured through the war. Ravilious seemed to capture a careless innocence of the period, sustained by modernism as an ethos, and yet altogether something else.