This exhibition, the first in the UK dedicated to the work of Jusepe de Ribera, delves in to the motivations behind some of the baroque artist’s most arresting images of suffering 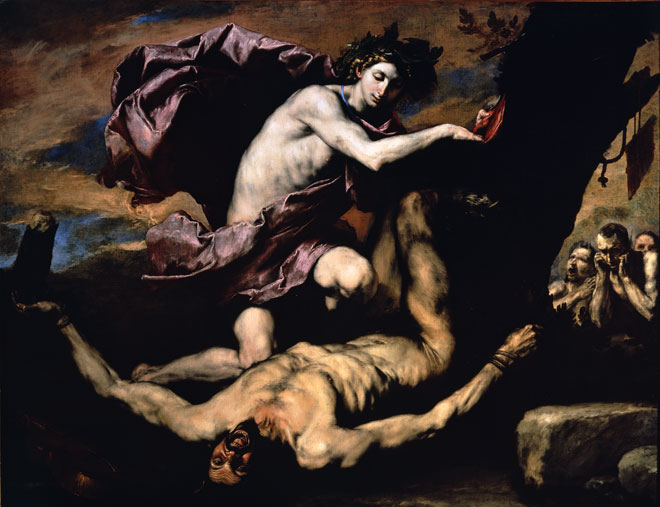 What a world Jusepe de Ribera (1591-1652) inhabited. Dirty, violent and capricious, counter-reformation Italy was a volatile place. This is Caravaggio’s world, Artemisia Gentileschi’s world, a world where murder, rape and torture crowded in from the grimy streets of the cities and through the doors of the studio. As did his contemporaries, Ribera embraced these chiaroscuro nightmares, dressing them in biblical robes, choreographing elegance into suffering. But the extent to which he actively revelled in these scenes is debated by curators Edward Payne and Xavier Bray, who argue that he was much more than a talented sadist, as some have suggested.

Ribera left his native Spain as a young man, choosing to make his name in Italy. Although clearly proud of his origins – he became affectionately known as Lo Spagnoletto (the little Spaniard) – he never returned home and became one of the heavyweights of Italian painting, turning his talents to that most baroque of subjects – the Christian martyrs. He was particularly fascinated with Saint Bartholomew, who was imprisoned for having converted an Armenian prince to Christianity. When he refused to honour the pagan gods, smashing the idol that was presented to him, he was flayed alive and beheaded for his troubles. 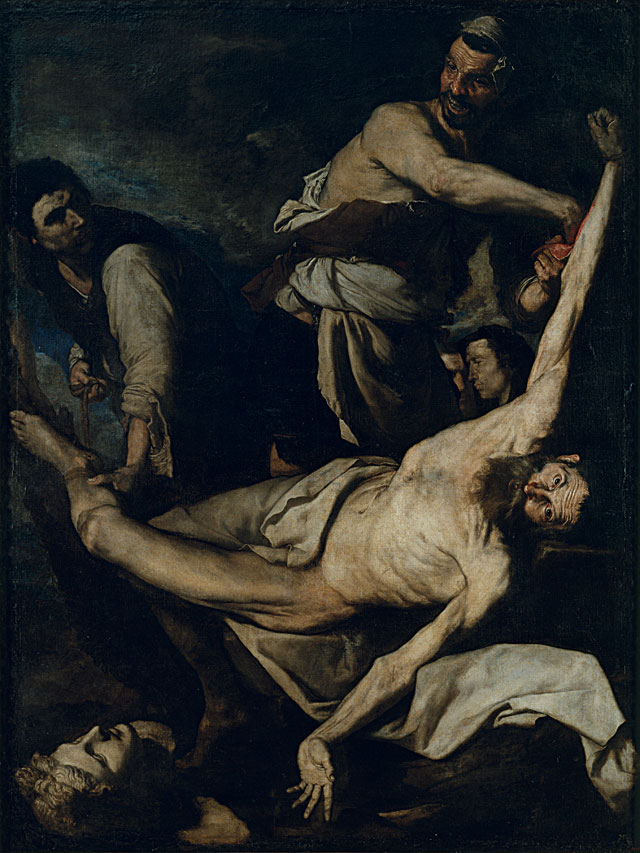 Two of Ribera’s paintings on this subject occupy the first room of this exhibition, both masterly and dripping with pathos. But arguably the most moving is the later The Martyrdom of St Bartholomew (1644), which shows the body of the eponymous martyr strung into a sweeping curve, his right wrist and left ankle bound with ropes. He looks directly out at us, his brow furrowed, as he implores us to reject the barbarity of pagan beliefs, his free hand gesturing to the head of an unseeing idol lying on the ground. Are you – like the cold, stone statue – blind to the true religion, he is asking us, or will you follow the path of redemption? A red-faced man delights in his job as torturer, digging his hand into the peeling flesh of Bartholomew’s forearm, while a mysterious, hooded figure leans towards another, who whispers conspiratorially into his ear.

With Ribera’s paintings – there are eight impressive canvases on display here – every sense is appealed to. In fact, a room of this exhibition explores the artist’s interest in the corporeal with a display of his drawings detailing eyes, ears, noses and gaping mouths. Skin was also important to Ribera, and, perhaps to add a more viscerally macabre experience, the curators have included a grisly specimen dating from the 19th century, which is decorated with morbid tattoos, the epigraph “pense a moi” added for good measure. This man was aware of the brevity of life and did not want to be forgotten. 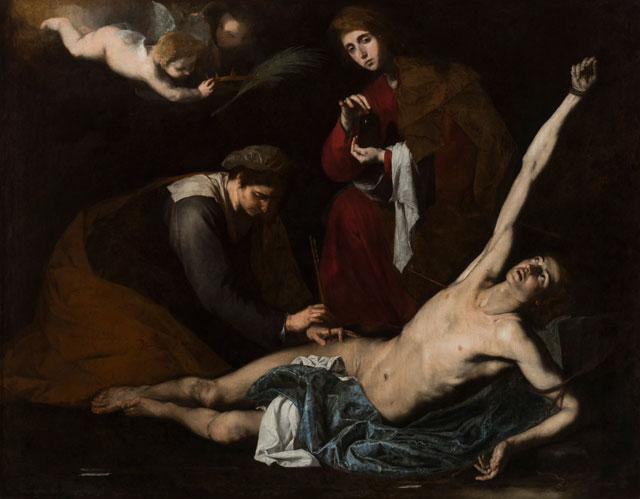 Ribera was also preoccupied with bindings. Even Saint Sebastian remains tied to a tree by his hands, as the holy women tend to his wounds. It seems not to have occurred to them to release his body, which forms an elegant curve almost identical to that of Saint Bartholomew. Much of his youthful torso remains untouched; Ribera has only painted two arrows, one in his hip and one in his side. This is a study of pain and vulnerability, but also of beauty in suffering; the artist delights in the male form with Caravaggio-esque sensuality. 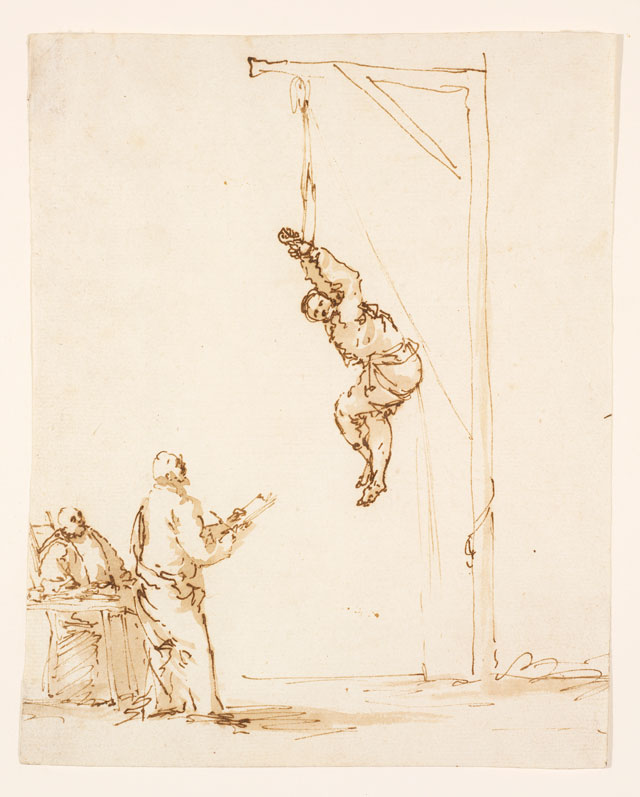 A favourite method of torture in Ribera’s day was the strappado. The victim, with hands bound behind his or her back, would be hoisted by a rope and eventually, the shoulders would dislocate. This was a public event, and one that the artist no doubt witnessed first hand. There are a number of sketches here, detailing this cruel form of punishment. One depicts a man loosing control of his bodily functions as the pain becomes too much.

The last painting, in the darkly lit final room, returns to the idea of flaying. For me, this work suggests that Ribera did enjoy painting pain – that, for him, scenes of torture went beyond simple moral instruction and everyday observances. Apollo and Marsyas (1637) illustrates the final scene of the classical myth, which tells the story of a satyr who challenged Apollo, the god of the arts, to a musical contest. Marsyas loses and is punished by the most horrific means; Apollo sees fit to flay the poor satyr alive, as his friends look on in horror.

In Ribera’s version, Marsyas is bound by his hands and feet, screaming in agony as the eerily calm Apollo rips the skin from his legs. A satyr in the background appears to put his fingers in his ears to block the sounds of his friend’s suffering. This is a cautionary tale, warning of the dangers of hubris, and undoubtedly an allegory for rivalry in the arts. But I’m not sure how convinced I am that this is a work about painting verses sculpture, as the curators suggest. Although Apollo is calm and pale, his fluttering cloak reminds me more of Titian’s Bacchus and Ariadne (1520–23) than it does the Apollo Belvedere. Rather, his pale skin and elegant demeanour heightens his godly status, setting him apart from the earthy, lustful satyr. 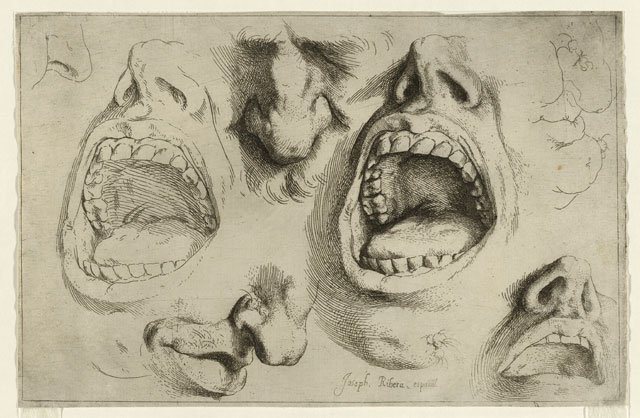 Ribera has clearly taken a great deal of care in getting Marsyas’s flushed face just right, in describing the satyr’s pain. He looks out at the viewer, engaging us, perhaps imploring us, his eyes watering, his mouth stretched wide with screaming. The placid, but sadistic god that stands over him only heightens the horror. Ribera was a true product of his time, an artist who embraced – and was a key part of – the baroque love of realism and violence. What this exhibition demonstrates, perhaps, is that Ribera took great care to imbue the saints with dignity and a noble stoicism, but when painting Marsyas and Apollo he let rip, using the mythological context as an excuse to convey agony, making us hear the screams of the satyr, making him, paradoxically, more human than the humans he painted. This final painting is an example of Ribera delighting in gore.