The Colour Palace is a monumental temporary pavilion by artist Yinka Ilori and architects Pricegore, bringing the heat and vibrant hues of Nigerian markets and mosques to the Sir John Soane-designed Dulwich Picture Gallery. But does it do more than simply draw attention and add ornament? 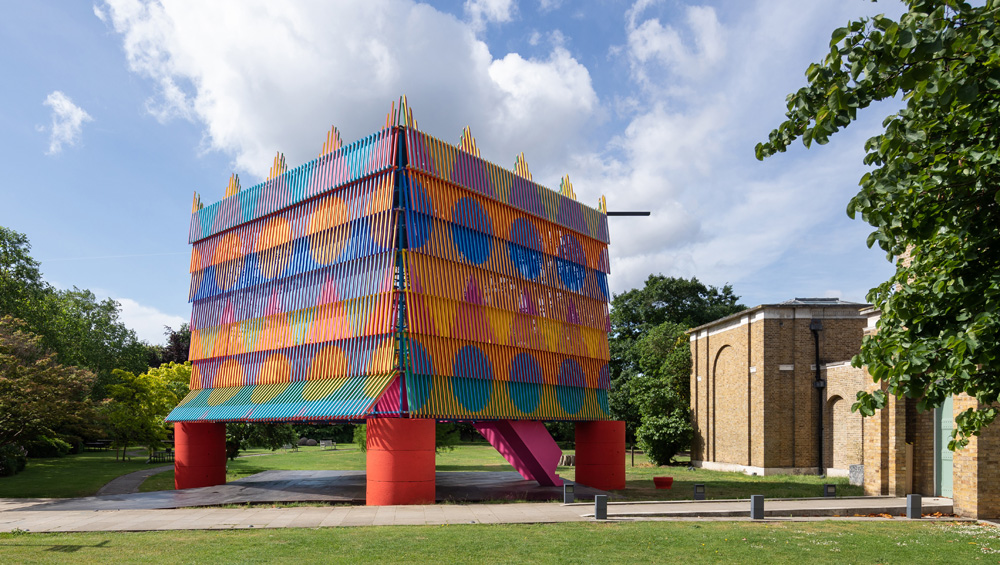 A little piece of Lagos has landed in Dulwich Village, in south-east London. And there is no denying the delicious frisson created by the eye-popping colours and patterns of artist Yinka Ilori and architects Pricegore’s collaborative Pavilion, in all its 10-metre-high glory, set against the mellow, 200-year-old brickwork and elegant lines of Sir John Soane’s Dulwich Picture Gallery, the UK’s first purpose-built public art gallery. Surrounded by some of the most exclusive private schools and expensive real estate in London - the vast, period properties along the adjacent road are in a constant state of excavation and renovation, their billionaire owners seemingly trapped in a never-ending game of architectural one-upmanship -  what could be more refreshing than seeing a building that speaks of boldness, ambition and dynamism constructed of nothing more than wood and paint land in its midst, open and welcoming to all ages, races and income groups. 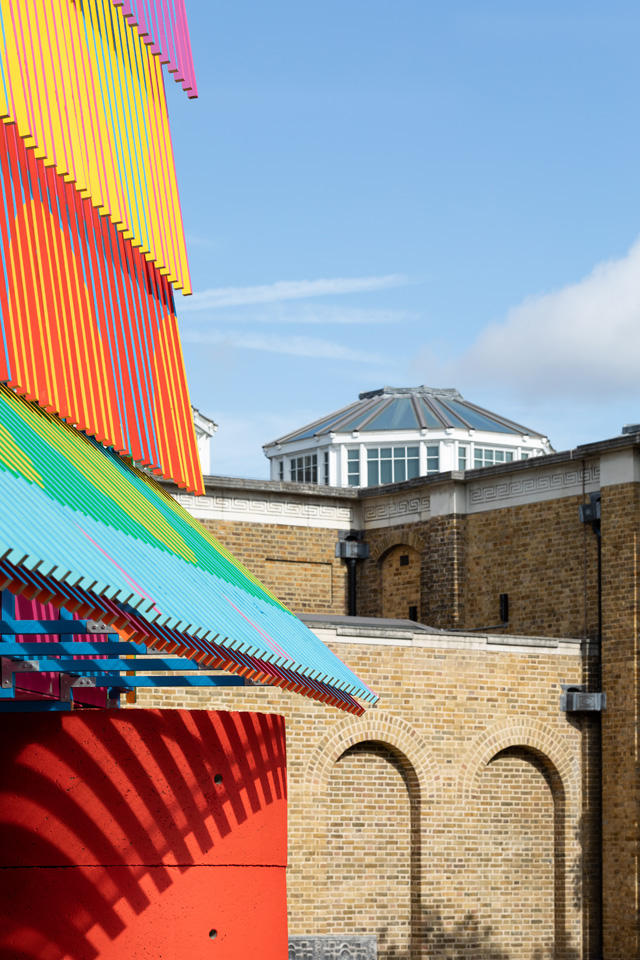 This building – The Colour Pavilion - represents the second round for the Dulwich Pavilion, a biannual competition launched in 2017 between the Dulwich Picture Gallery and the month-long London Festival of Architecture, aimed at giving young architects (and this time an emerging artist, too) a chance to create something spectacular in the public realm; it also gives the gallery a chance to step out of its somewhat cellular, antique spaces and expand audience and activities. This year, as before, it will host many educational and entertaining diversions, from Pavilion Lates to neon life drawing, supper clubs to yoga.

The zingy tones of pink, yellow, red, orange, blue and green may seem radical enough, but the wooden structure itself is highly innovative, featuring thousands of pieces of timber, all of the same size, displayed with their joints visible to reveal the craftsmanship and structural logic. 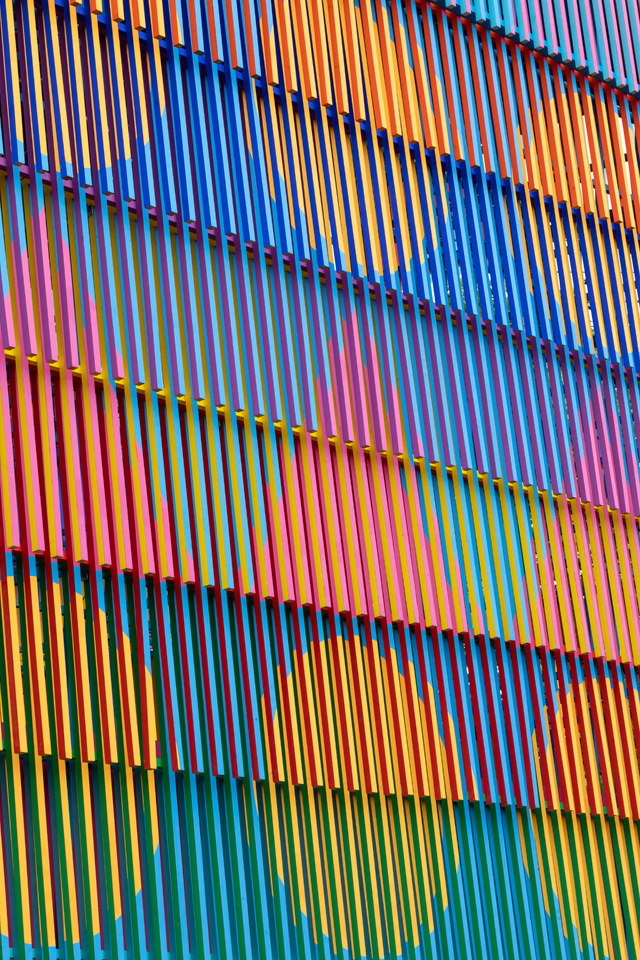 The British architects, Peckham-based Dingle Price and Alex Gore, met the British-Nigerian artist Ilori while touring artist studio spaces they had recently created, in a refurbished industrial building in north London, and were attracted to his bold use of colour in furniture and murals. He was looking for an opportunity to scale up his work, and a conversation quickly evolved around cultural exchange between the three practitioners, as well as between Soane’s strategic and rigidly geometric structure and the iconic elements of Nigeria’s architecture and design. The last include its elaborately ornamental mosques and the vivid, Dutch textile-inspired patterns that fill Lagos’s fabric markets – as well as the fabric shops of nearby Peckham, a London neighbourhood with such a substantial Nigerian community it has been dubbed “Little Lagos”. With sponsorship from local company Mylands, which makes specialist paints for film sets, the team were able to recreate the exact, rich tones of Ilori’s palette on a grand scale, deployed via his trademark repeated circles and triangles.

Gore says: “To do something that integrates art and architecture is quite a difficult thing. I’d always liked colour, always liked Yinka’s ability to tell a story through something like a chair. And we wanted, architecturally to try and keep that kind of ambiguity so you can use your own imagination: for us it might be one thing, for a six-year-old something else, for an art critic something else altogether.” 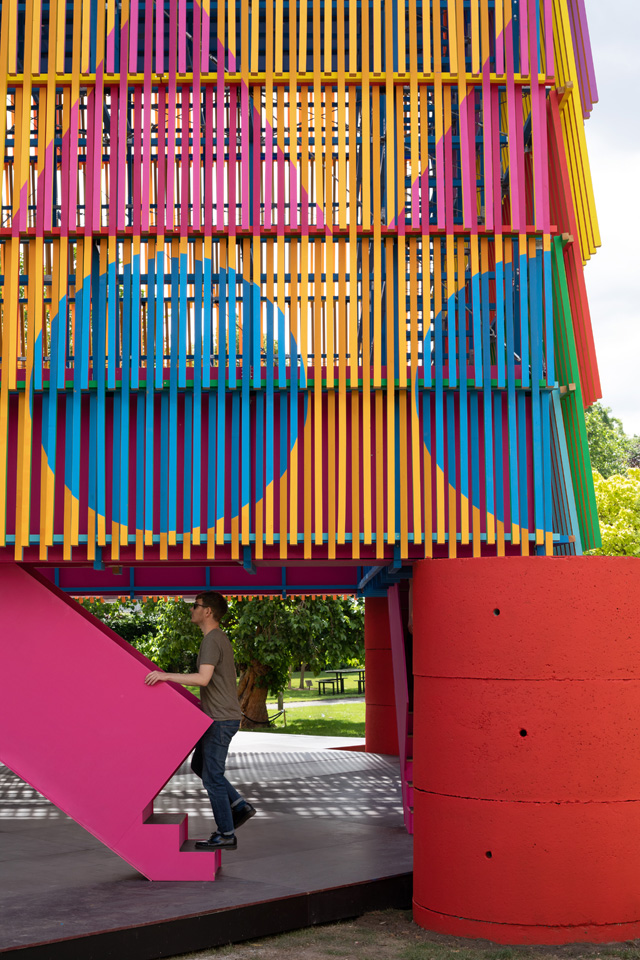 Set high on monumental feet – huge, red, barrel-shaped evocations of the saddle-stones that have long supported ancient grain stores from raids and floods, both in Europe and Africa – the structure remains open while creating a holding space in its centre, which the team describe as a “theatre in the round”. Two narrow, pink wooden staircases zigzag up from its ground floor to a first-floor, perimeter gantry that allows views through the lattice to the gardens and gallery beyond. While the cheap wooden elements may hint at African market stalls, the shape is intrinsically Soane-ian, says Dingle: “This pavilion base is a perfect cube and the (frames of the) cellular structure are a metre cubed. There are references also to Soane’s use of colour.” (Indeed, the interiors of Sir John Soane’s former home, now a museum, feature surprisingly vivid shades of yellow and red.) 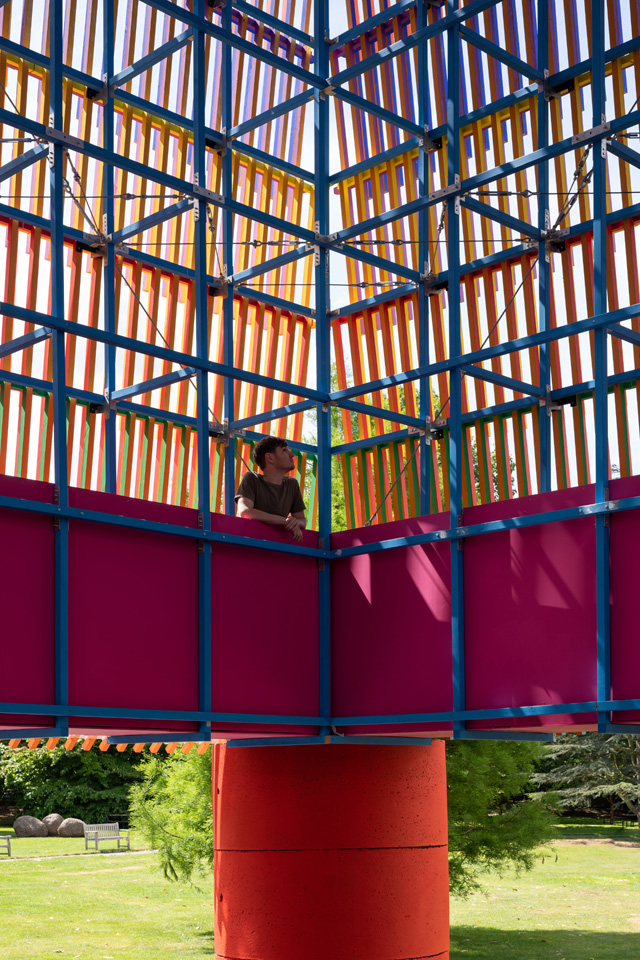 But the team didn’t want to take the Soane associations too far. Dingle says: “At the start of the design process we were sketching a few things that were very clearly Soane-ian - about the way he makes domes or particular windows - and we realised that was too literal.”

Gore adds: “We were learning a lot from what Yinka was showing us. But the (African influences) also reminded us a lot of things we’ve seen, like the Doge’s Palace in Venice. They were probably doing the same things for similar reasons. Those rhymes were really interesting.” 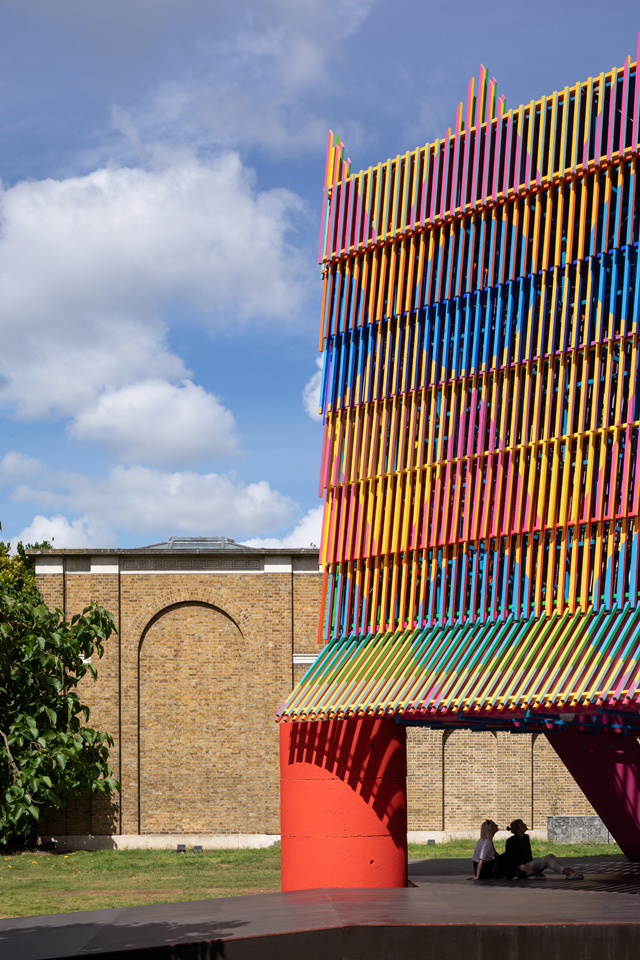 What they have done feels vibrant and quite radical, compared with the elegant mirrored and timber planes of the previous pavilion, IF_DO’s After Image. If there is one quibble, it is that the team clearly designed with only one kind of weather in mind: the pavilion really comes to life when sunlight pours through its slatted planes. They weren’t planning for the torrential rain that can often soak the UK in June – and has done so for the pavilion’s first wet week. On a dark, drizzly day, the interior feels dank and gloomy. But it was a bold choice - out of 150 competition entrants - for the gallery, and will no doubt put the architects and the artist fully on the map: 2017’s pavilion helped to catapult IF_DO to enviable prominence, for a young practice, and resulted in multiple offers of work; this one, if anything, represents even more of an enticing Instagram-opportunity.

But if the gallery is to seize this moment of augmented (virtual/social) attention and use the opportunity this pavilion offers to expand its audience from the usual well-heeled residents of Dulwich, it will have to work hard to prove its relevance; while the pavilion is free, the gallery’s entry price and the eye-watering cost of teas, coffees and cakes in its sleek, glazed cafe extension are enough to deter most non-traditional gallery-goers from the substantial Afro-British communities that live in the wider Southwark neighbourhoods. If the programme doesn’t go all out to attract those whose cultures are evoked in its pavilion’s patterns, it will risk being an empty gesture, a sop to the egos of the local residents: making them feel a little bit more urban and edgy without pushing them out of their geographic comfort zone. 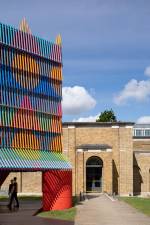 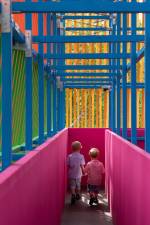