Just as all utopias contain potential dystopia within them, the grandest pageantries are their own parodies. As with great Pop Art, Thomas Bayrle’s strength comes from the uncertainty about whether his work is wholly satire, or celebration, or a combination of the two.

It is a shifting, ambiguous and often thrilling relationship, akin to the trembling needle of a compass. Certainly, the sensory overload involved in parts of the All-in-One retrospective has a distinct cutting edge, but it is playful rather than condemnatory. In Glücksklee (1969), hundreds of cans of condensed milk are built up to form a giant composite. The contents are no accident; the combination of the saccharine and the glutinous might be fitting ambrosia for our age. Inevitably, Warhol’s tins of Campbell’s soup spring to mind, and his influence is clear. Bayrle, however, was one step ahead of the doyen in a sense: Warhol with his screen-prints envisaged the future as reprographics and newsprint; Bayrle, more accurately, saw it as pixels. Where Warhol repeated the discoloured image of Marilyn Monroe until she became tragic, disposable and fascinating, Bayrle would continue the multiplication to very different effect. Warhol changed the image; Bayrle changes the viewer.

There are numerous occasions in this superb exhibition when Bayrle’s pre-emption of the computer age, with his characteristic “super-images”, seems not only highly impressive, but bafflingly so. The morphing figures of Hemdenleben (blaue Version, 1970), for example, are made up of thousands of recurring images; the overall impression strongly resembles the illusory 3D grid of modern animation and game design. That it was constructed manually seems remarkable, all the more so bearing in mind it was 10 years before the first relatively primitive 8-bit computers and consoles came into public circulation. It is like finding a blueprint of a jet engine in the steam age.

It is clear from the dates of the works on view that Bayrle was a prophet of the teeming image-saturated apocalypse we live in now and the digital mechanics that enable it. The problem with being a prophet is that you remain one only as long as your prophecies do not come to pass. The future Bayrle foresaw arrived, so there is a danger that his work might be subsumed in the very phenomena he predicted. Yet he is both inside and outside the stream of modernity, casting a curious eye over it, at once immersed and apart. There is also the strangeness of seeing the new turning old in his work – what we might call the antiquity of modernity. The well-dressed urbane couple of Hemdenleben may appear as electronic beings, but their style of dress dates them to at least half a century ago. Technology may go out of date and be replaced, but art is a very different and more resilient entity. It is merely our perspective of it that changes as we move past it to other angles. Indeed, Bayrle’s message remains more relevant than ever and will likely continue to resonate as populations increase and technologies magnify.

For an art that seems proto-digital, Bayrle’s work has surprisingly organic origins. In the late 50s, he worked as a weaver for several years. During this period of frenetic activity, he found the sound the looms produced, as well as the patterns of the textiles and the repetitive nature of his work, caused hallucinations. One day in the factory, he imagined he could hear nuns from his youth, chanting. Initially, he sought to replicate this chimerical feedback and investigate in art how the brain tries to make sense of floods of information. Later, he would see that, far from an isolated incident, the phenomenon was, in fact, the basis of modern existence.

Bayrle’s approach to this epiphany took artistic form in different mediums, all of which are commendably exhibited at the Baltic. He made kinetic sculptures from car engines, initially trying to get the sound of the mechanics to create associative loops. His aim was to conjure up monks singing as if there were harmony and spirit to be found in a potentially destructive soulless machine. These sculptures move as if they are living organisms. The viewer is at once drawn to the fluidity of the movements and repulsed by the uncanny usurpation of the human by such robotics. In another transformative work, La vache qui rit (1967), the stylistic simplicity or banality of the Laughing Cow icon is multiplied to the point where it becomes maddening. What starts as a childish image changes character, gaining a ludicrous hint of menace with mass replication. It is the visual equivalent of innocuous pop songs being played repeatedly at high volume to torment captives or besieged kidnappers. This is advertising as white noise and an early warning of the bombardment of brands that now defines the style of metropolitan life. Yet it is nothing more than a laughing cow.

What occurs in our overworked neural networks has been projected upwards by Bayrle on to civilisation as a whole. There is a not entirely healthy symbiotic relationship at work, although it is unclear whether cities are dysfunctional because we are, or vice versa. Bayrle’s art reflects traffic systems, telecommunication networks, the cartographies of supermarket aisles, town grids (City on the Sea, 1977), and the infinitesimal cybernetics that suggest to some that there is no such thing as free will, but rather innumerable undetectable systems governing us. God, if there is one, is the butterfly effect. Likewise, the devil. Bayrle’s 1977 cityscape portrait of the revolutionary/terrorist Carlos the Jackal avoids making any moral judgment of the man as a hero or villain. As with his similarly constructed crucified Christ over the autobahn, Autobahnkreuz (Highway Junction) (2006-07), this Carlos is a compromised character, swallowed up even in the process of encompassing society.

It would be unfair to depict Bayrle’s work as defeatist though, particularly given the rich strain of humour through much of it. Perhaps it is not a question of whether humanity can survive the machine age, but how both will integrate, and the problems and solutions (which is worse is debatable) this will arouse. Society, after all, Bayrle asserts, is a machine and has always been. The title of All-in-One refers to the Confucian concep of the individual as autonomous yet inseparable from the collective. The microcosm and the macrocosm are reciprocally linked. Bayrle displays this darkly but lightly. His bleakly comic and blankly erotic M-Formation (1970) is like a diagram from a Kamasutra for binary-fuelled robots (with a sly nod to Marx and sexual liberation in the process). Elsewhere, the apparently liberated figures of his Fire in the Wheat series (1970), casting off their clothes, dancing and fornicating, are not liberated at all. Dissent is co-opted, absorbed and endlessly repackaged by commerce as fashion. Damned as they are to be little more than mannequins, the figures stand in frozen dance steps or imitations of seduction. Even intimacy is commodified, prophetic given the now-burgeoning online porn industry and its influence. The difference between autonomous and automatons is just a slip of the tongue.

With SARS Formation (2008), we have perhaps Bayrle’s darkest creation. Looming down from the ceiling, it is a virus unpacked, harmless even intriguing as a solitary form yet one that threatens to multiply to threatening proportions, as all his work does. The microcosm and macrocosm again are linked by the electrical charge of what this holds in store for us. Yet even this is lightly rendered, resembling from afar perhaps modernist airport seating. It is a fine example of how the lofty space of the Baltic has been brilliantly adapted for the exhibition, using the ceiling, walls and floor, with sculptures, collages, silk-screens and an abundant collection of other work. Bayrle’s maximalism comes in different forms. At times, the effect is deliberately claustrophobic with his wallpapered, fashionably dystopian room. At others, the vastness of the hall complements the bleak skylines on show.

Bayrle’s art can and does have political bite. It lays out what might be called capitalist realism in all its garish glory and invites our opinion. It marks crossover points between the methods and ends of capitalism with its supposed antithesis, communism. This often incorporates Bayrle’s personal views as a former West German, balanced between worlds. His large cleaning-fluid bottle piece Ajax (1966) includes “archetypal” female figures, referencing domestic servitude and arguably the official German cleansing of the past. It also displays a recurring Bayrle link between the orchestrated Maoist spectacles of adoring crowds and the western spectacle of aspiration, conformity and retail-dazzled drudgery. “What will all this amount to?” Bayrle asks, whether through the ghostly silk-screened cardboard lattices transposed with propaganda images from Mao’s China or the throwaway junk of consumerism, where even the fruit (Apfelbrei, 1974) is mass-produced.  All is disposable in these worlds, Bayrle tells us, even people. Yet if that is the case, the ideologies behind these systems, whether overt or hidden, are equally disposable.

It is understandable in such an authoritative retrospective that some works fall short. His dollar sign motorway work $ (1980) seems a bit too obvious, despite its charm. At times, his intentions work a little too well, with Op Art ripples giving way to squirming, almost magic-eye, visuals. Often, the most effective work comes in more subtle packages. In Walter Benjamin’s often-quoted but little-read The Work of Art in the Age of Mechanical Reproduction (1936), the writer bemoans the increasingly prevalent loss of the aura or authenticity of an object when it is replicated. Appropriately, Benjamin identifies that we are now locked within systems (a Bayrelian idea if ever there were one). He implies that some of this missing aura has been diverted into the way creative objects are produced and those who control those means (an idea tacitly endorsed by the current monopolising advances by gatekeepers such as Windows, Google and Spotify and their otherwise bewildering worship at the expense of what is now risibly labelled “content”). We might go further and claim that our lives have lost this “aura” or had it stolen. Even statements of defiance, however, are consumed in both senses of the word; either converted into harmless saleable wares or crushed, as evidenced in Bayrle’s General Electric (1970).

Despite Benjamin’s accuracy, Bayrle’s artwork proves the theorist was too pessimistic. Aura may well be located in the eye of the beholder and may exist still within the capabilities of the creator. An artist such as Bayrle can isolate commonplace throwaway objects and infuse them with previously absent substance, if not quite authenticity. Despite its commercialisation, the power of art as “a place without” has not yet been completely erased. We may well be adrift in a sea of flotsam, but the best artists can raise an object above our heads to contemplate for the briefest of moments. Notably, the old word for aura, which the quasi-Marxist Benjamin sidestepped, was “soul”. In Bayrle’s Madonna Mercedes (1989), we are presented with a Virgin Mary and child icon made from distorted shots of a luxury car. “What is sacred?” he may be asking us. “Is anything still profane?” Perhaps there is the suggestion that spiritual glory has been replaced by soulless greed. It is worth asking, however, as Bayrle’s work mischievously hints, whether we ever had a soul to lose. And if we did, what price did it sell for? 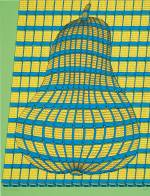 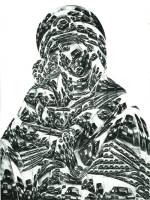