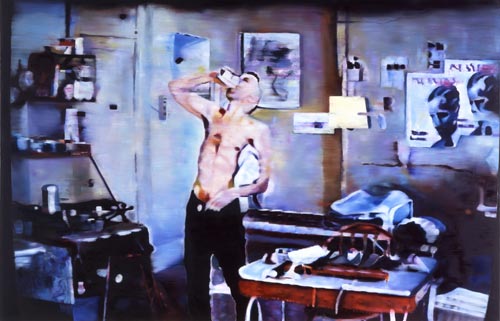 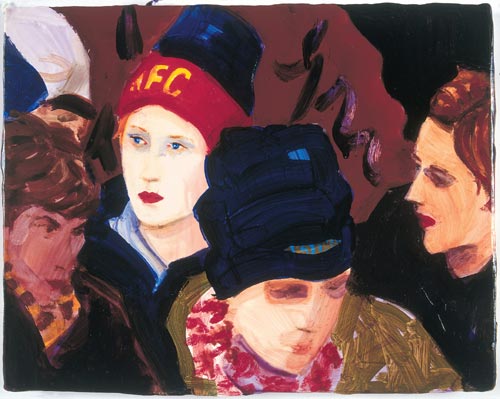 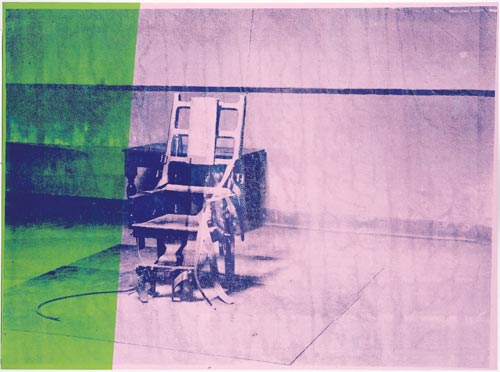 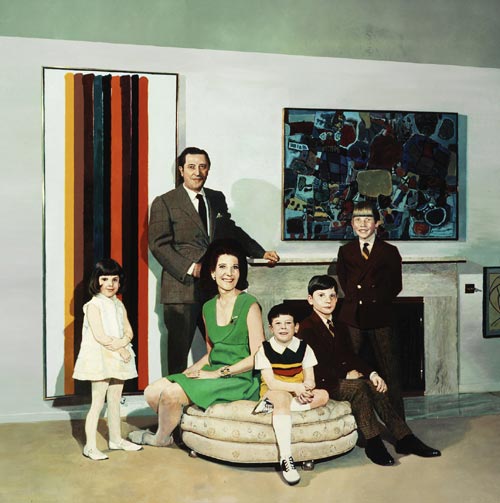 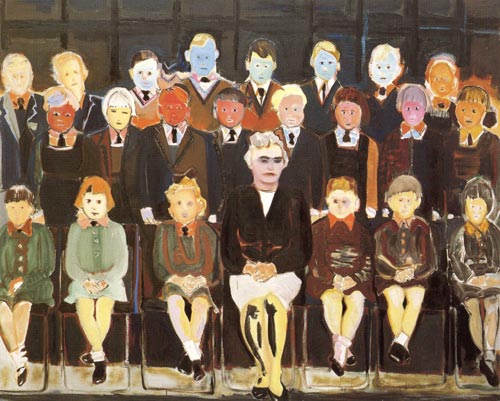 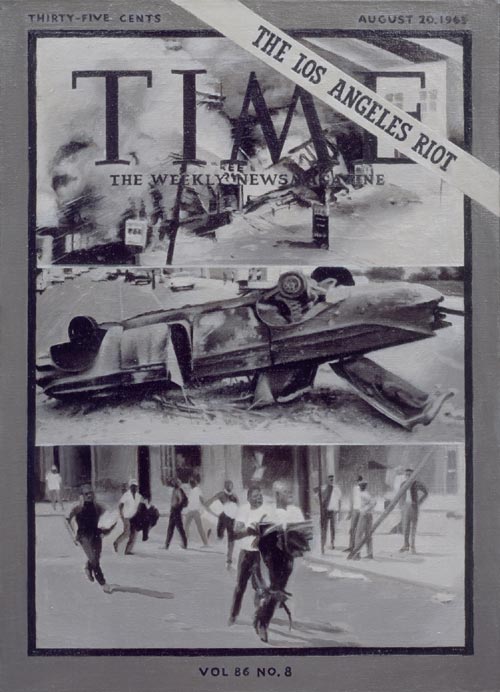 The painting of modern life

This is an outstanding international exhibition, dedicated to a significant section of contemporary painting. It has added lustre to the already tightly packed London galleries and museums programme. Ralph Rugoff, the curator, has applied considerable intellectual power to the exhibition catalogue and agenda. Seldom has a subject seemed to be have been so thoroughly investigated, and to be more appropriate to the cavernous open spaces of the Hayward.

In 1969, Udo Kultermann referred to the words of the nineteenth-century writer, as follows, 'One of the things we must do if we are to establish a new attitude to art, is to destroy the sense of certainty which is one of the principal legacies of the historical school (of art criticism). The individual would then be able to make his own value judgments, for he would regain a certain measure of timidity, which is a prerequisite for any really productive attitude to art based on intimate knowledge'.1

There is in such a way still today a valid contingency motivating this exhibition. The critical tradition, which prompted the exhibition, traces back to Charles Baudelaire, the French poet and critic. His essay entitled 'The Painter of Modern Life' (1863) described how contemporary painters sought to depict the changing landscape of modern life - capturing images of 'the transient, the fleeting, the contingent', and so drawing out from the conventions of fashion the poetry that resides in its historical envelope. Baudelaire was summoning painters to, 'focus on the world around them', a novel development at a very convention-riddled time. Baudelaire was interested in getting painting to join reportage together with high art's 'philosophical imagination'. This referencing undoubtedly gives the exhibition its intellectual provenance.

By contrast, the prescriptions of Clement Greenberg that modern painting should not be engaged with world scenes and its imagery was not therefore to be heeded, is disavowed by the body of artists covered in this exhibition; not only by their leading lights but also by the greater body that accompany them here. So we find here evidence of an alternative quest by painters confronted by the dilemmas of contemporary painting, its justifications, its techniques and its very rationale.

Predictably and fortunately, this exhibition reveals a distinct lack of cohesion or co-ordination between the participants. The twenty-six artists are selected from a wide number of working milieus, and their unawareness of each other seems to characterise their work and the views expressed. If one was to take a leading group - composed of Warhol, Richter, Pistoletto, Morley, Hamilton, Hockney, Robert Bechtle, Franz Gertsch, Kippenberger, Tuymans, Dumas, Peter Doig, Elizabeth Peyton, Liu Xiaodong - they line up loosely with a second row, Richard Artschwager, Vija Celmins, Judith Eisler, Wilhelm Sasnal, Eberhard Havekost and Johannes Kahrs. All are individual experimentalists, and there is little interaction. For example, the last two, Berlin artists Havekost and Kahrs, were included notably in a recent published survey2 and they have little enough in common. That is the form across the board.

Recent, grudging London press comment about the exhibition has complained that the number of works focusing on 'backs' of people is 'astonishing'; but in fact, of the 100 works on show in the exhibition, less than 20 actually focus on such human rears. Only Pistoletto, Morley, Hockney, Gertsch, Kippenberger, Tuymans, Dumas, Doig, Kandl and Eisler seem noticeably to be prone to backs. The Pistoletto 'Ragazza che cammina' is a masterly, fully clad posterior of great charm, confounding the low level of critique of the show so far.

This exhibition may indeed be unpopular with the arbiters of work here in London precisely because it departs from the normal mix. To refer back to Baudelaire and not, say, to Foucault or even TS Eliot is provocative but betrays an exceptional scholarly edge. Certain artists, such as Tuymans, exhibit a preference for filmic photographic sourcing, as opposed to purely photographic examples for which Gerhard Richter, Richard Hamilton and Peter Doig demonstrate their preference.

The planning of the exhibition is based upon the consummate awareness of the curators that they are dealing specifically with the continuity of the long-standing tradition of history painting in a contemporary vein, investigating and confronting preoccupations of modern life. To this end, the exhibition is hung thematically, in seven sections. There is an initial introductory section, with key works by Gerhard Richter, Andy Warhol and Malcolm Morley among others. There follows the section on history and politics, with Andy Warhol's 'Big Electric Chair' (1967), Vija Celmins' 'Explosion at Sea' (1966), Richard Hamilton's famed 'Swingeing London 67' (1968-9), and evocative works by Luc Tuymans, Morley, Elizabeth Peyton and Marlene Dumas.

The section on work is led by Gerhard Richter's 'Nurses' (1965). Characteristically monochromatic and blurred, it is accompanied by a similar group work, 'The Teacher' (1987) by Marlene Dumas. Her painting, 'The Visitor' (1995), this time all backs, accompanies it.

Wilhelm Sasnal's two gas stations works, and his 'Tarnow Train Station' (2006) are included together, brooding scenes tending to monographic representation. In contrast, the section 'Leisure and Everyday Life' provides a surge of colour, with Morley's 'On Deck' (1966) and Richard Hamilton's 'Chicago Project' ('I' and 'II'; 1969). The snapshot 'Mother and Child' (1984-5) could equally well be here, but is placed in the section 'Family and Friends' with Hockney's 'Mr and Mrs Clark and Percy' (1970-71). The Section 'Social Spaces' gives Peter Doig full reign. Franz Gertsch is assigned to 'Leisure and Everyday Life', and here where 'Family and Friends' might be equally suitable as a category there appears to be a sudden uprising of unwarranted 'Photorealism', surely not at ease in this exhibition. That apart, it would be relatively easy to jumble the paintings into different categories and with different mixes. The categorisation by subject attempts to imply a definitive approach to an exhibition structure which is otherwise pleasant to deconstruct. If the formulaic recognition of  'History Painting' as a continuing genre is to be maintained, there could be better ways of achieving this than the summary categorisation which has been applied.

Lawrence Alloway once described Malcolm Morley's paintings as establishing a state of the uncanny, and this might be applicable both to Richter and Pistoletto. This uncanniness pervades the works in the show (with the exception of those of Gertsch) in a subconscious way: it shows how the painting of modern life today is reminiscent of surrealist art, or at least invokes some of its techniques. The plethora of excellent photographic exhibitions and retrospectives held recently in Europe does help to legitimise this precedent. The exhibition as a whole offers a full and credible narrative for one of the routes which painters investigated from the 1960s, and which continues today. Set against the apparent threat earlier posed by photography, such a tendency has shown the resourcefulness to override, redefine and extend its own conceptual reach.

One is reminded, as one leaves the exhibition, rejoining the still grey conjunction of office buildings and commuter rail lines at Waterloo, of Gerhard Richter's sobering painting (not in the exhibition) 'Administrative Building' (1964): a drably anonymous office building, where lives are incarcerated in a desolate environment, as seen from a passing train,which perpetrates a kind of purgatory and a deep sense of unease.The painter must also reflect the leisure-based corollary compensation to this. That is precisely what this well-conceived exhibition demonstrates as achievable.

This is an exhibition for all students of painting to visit, at either venue in London or Italy.