Edinburgh’s National Gallery was indeed fortunate to receive the above exhibition following showings in Baden-Baden and then, Beijing, earlier in 2008. Reviewing the Catalogue is to appreciate a valuable tool to understanding the more salient tendencies of Richter’s work. This publication contains two outstanding critiques, one by Gotz Adriani and the second by Dieter Schwarz. Those who have seen the very major retrospective mounted by Museum of Modern Art, New York, in February 2002 and its massive catalogue (edited by Robert Storr) might guess that this new show is diminutive by comparison, but as the catalogue demonstrates it represents a significant update from that time.

National Galleries of Scotland with Hatje/Cantz, 2008
Edited by Gotz Adriani

Richter’s work has inevitably changed and evolved since then, and continues to do, and this publication captures just this moment in time. In Studio International Richter had first been noticed in 1965.1 We asked Richard Demarco on this latest occasion, (who had himself first invited Richter to Edinburgh during the 1970 Festival, to review the exhibition: see above). This early recognition was followed in Studio International by a full article by Heiner Stachelhaus (September 1972).2 Both instances posed critics with something of a dilemma, but they caught the challenge to painting already posed by Richter. Except for Anthony d’Offay in 1988, and the ICA in 1989, it was not until the Tate Gallery show in the 1990s, and again reflecting the stimulus of Anthony d’Offay, that Richter began to be seriously noticed here. But really it was Demarco’s involvement of Richter in his “Strategy Get Arts” Festival 1970 group show that started things.

“No one has set forth the terms of Richter’s dilemma more cogently than the artist himself. In interviews, letters and private ruminations, the leitmotifs of Richter’s thought have been stated from the very beginning: faith versus scepticism: hope versus pessimism; engagement versus neutrality: self-determination versus fatalism; imaginative freedom versus ideology. In the work itself, these dialectical binaries and the ramifications they have engendered take on a visual and beyond that, material reality: impersonal iconography versus delicacy of facture; veiled intimacy versus formality of presentation; chromatic austerity versus rich tactility; optical splendour versus physical remoteness; gestural exuberance versus strict self-censorship; resistance to easy pleasure versus exquisite hedonism: sombreness versus playfulness; forthright assertion of image as object versus mistrust of the image as representation.”3

One is brought in mind of a literary parallel, the novels of the late W.G. Sebald, (b.1944) a German author and academic in England, he offers a platform of the same complexity, as in his famous novel Austerlitz.4 Sebald has been referred to as the James Joyce of the 21st century. Sebald coincidentally also like Richter, although over a decade younger, originated from the Dresden area, and experienced family memories of the glow of the incendiary-bombs -sourced holocaust there of February 1945. The range of Sebald’s characterisations of places, and people, is at first seemingly disconnected and confusing to the reader, then deeply moving in turn. There is also, as with Richter a wholly unpredictable quality, with disconnected episodes, and backward references. Richter’s grey period in painting can readily be likened to Sebald’s, Austerlitz as a whole. Within Richter’s work one can draw out mystifying comparisons. Stadtbild, (Townscape, 1970) can initially be related to Townscape Madrid, 1968 (not included in this exhibition). Yet the viewing angles are wholly different. The first is flat overhead; the second is a shallow perspective. In this same exhibition, however another Stadtbild is deliberately obscured, indistinct. In the same year a perspective view of the Cathedral Square, Milan is blurred as if observed at speed. All these three are grey in tone, and the ghost of bomb-torn Dresden lingers in the urban gloom.

It is an unremittant process, en route for the wholly abstract diversion such as Grey (2000), itself advancing from the Grey, paintings of 1973, 1974 and 1976. Here indeed is what Dieter Schwartz has referred to in this publication as, “creating something that has nothing to do with art, that excluded any kind of composition, invention or design.” “His aim had been to use an absence of style and meaning to create a freedom that would have nothing in common with the conventions of art”. (As with Sebald’s basic premise in the literary constructing of Austerlitz) Richter, for his part, was very aware of the fact that his pursuit of stylelessness was itself a style, and that his avoidance of emotion could be deeply moving. “Richter based his solidly constructed visual universe upon a deep-seated scepticism,” writes Schwartz. His response is significant, to the question of “what painting still could do and should do” tied in with the belief ”that in utopia meaning future, hope may arise as it were subversively as something that secretly occurs in someone.”5

While Richter’s landscapes initially seduce and then spurn the viewer by a deliberate act of non-connectivity, the grey urban landscapes at turns now mystify and then repel the viewer. The grey abstracts then become less grey, incorporating traces of pale blue, even violet. A new exploration had thus begun. Specifically, under-painting gradually disappears. All this is revealed by the illustrations and texts of this publication. Conversely the Museum of Modern Art Catalogue did not attribute to the grey works any great insight or enthusiasm. From that time, in this new exhibition Richter, discreetly even subversively has placed them firmly in focus. The actual picture-hanging sequence of this show is recaptured in the catalogue, which must be a first step to getting a fuller understanding of Richter, the man and his work to date. The Stadtbild 1969 and 1970 paintings testify to this significant withdrawal from the city, not least by one who was a childhood refugee of the bombing, of Dresden and wandered around the ruins of a city thus devastated and dehumanised. So by contrast the glimpses in the landscape paintings of rural buildings and part-settings remain idyllically now to tantalise, yet stay always discreet in professing any significance. These are deeply personal works, within the total oeuvre. This book/catalogue is a vital aid to a fuller comprehension of the work of Gerhard Richter, a twentieth/twenty-first century master: whether of the postmodern or modern, it is only posterity that will eventually decide. 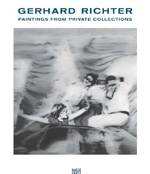