The Quick & the Dead

The Quick & the Dead 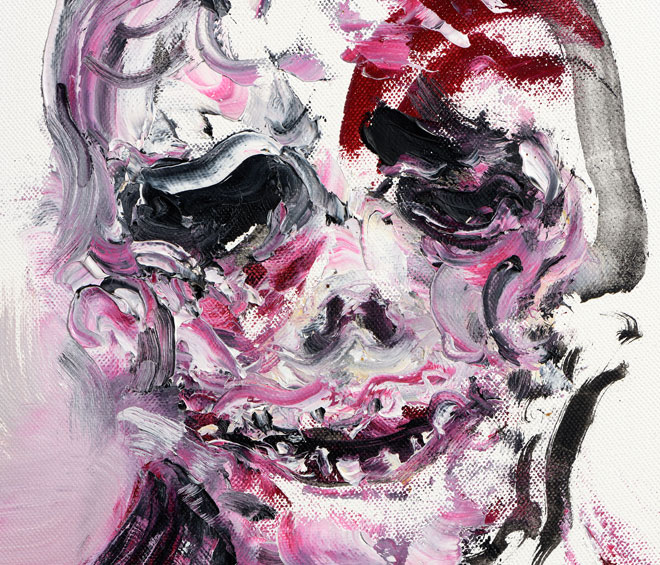 Although this is a group exhibition, The Quick & the Dead at the Jerwood Gallery, Hastings, is really about Maggi Hambling. She is the matriarch, the centre around which the younger (but not young) artists circle like orbiting satellites. Sebastian Horsley called her “mother” and she, in turn, called him “my wicked son”. Horsley, the top-hatted Soho dandy, known for his love of drugs and prostitutes, is the dead member of this band, the others are the “quick”, or, in the biblical sense of the word, the “living”. He introduced Hambling and Sarah Lucas in the Colony Room Club in Soho, London, in 2005 – the two have been firm friends ever since – but he died in 2010, aged 47, from an overdose. He is remembered here through stills of Lucas’s recording of his crucifixion in the Philippines, an annual Good Friday event involving penitent volunteers. The nails that were driven through his hands are displayed in a lined box as relics of an extraordinary life. 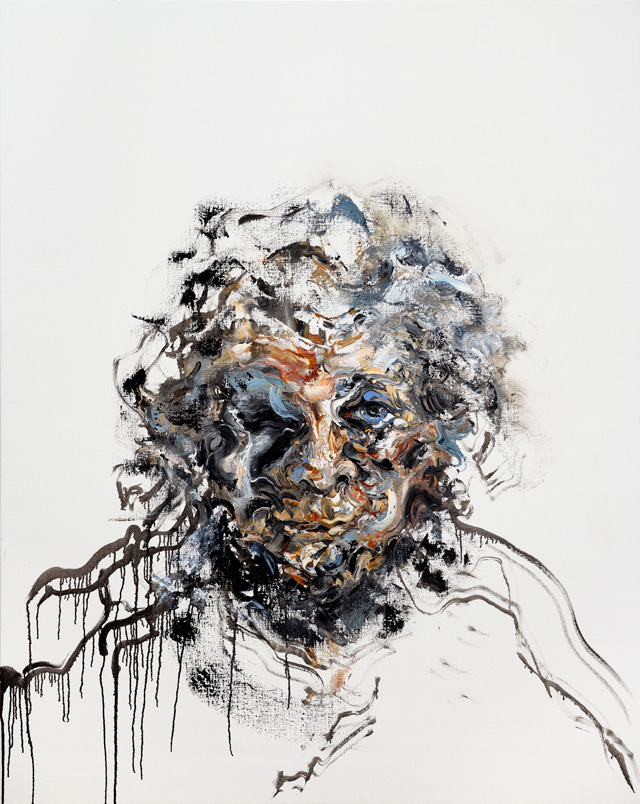 Hambling painted Horsley several times after his death, imagining, it would seem, his decomposing body, his likeness falling from his bones to reveal the white skull beneath. In all of these paintings he is disintegrating, melting or dissolving into oblivion. Hambling has said that Horsley’s life was an elaborate rehearsal for death and we feel her coming to terms with this, searching, unflinchingly, for an image that reconciles this tragic irony. 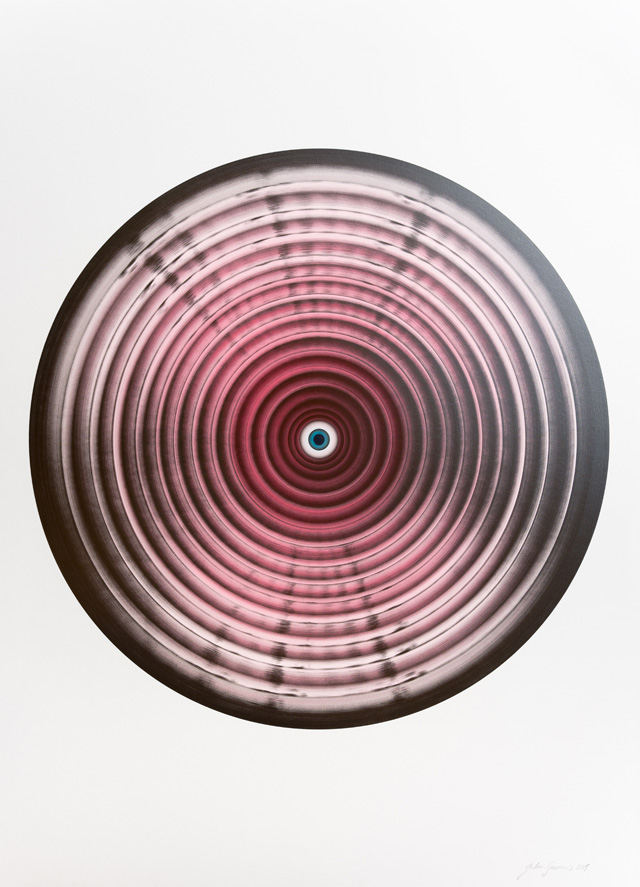 Julian Simmons captured Hambling’s forensic gaze with concentric circles of graphite, miles of it, in fact, which frame a single eyeball. He made two of these, one pink, recalling her “ruddy complexion”, and the other green. Juergen Teller, too, recorded that penetrating look with a photograph taken while he modelled for her. Half her face is obscured by a drawing board; a cigarette is clamped between her fingers, her downturned mouth set like stone. Hambling’s charcoal drawings of Teller seem to vibrate with her signature lines. In various studies he stares straight back at her, in another he looks down, and then he takes out his camera, his expression transformed from benign and perceptive to that of the scrutinising photographer. Hambling tells in a video about the project, that the two artists were initially wary of each other, frightened by the other’s reputation, but this confrontation, this mutual portrait-making, seems to be an act of familiarisation, a way of understanding.

Teller has a self-portrait here, too, in which he stands naked on his father’s grave, one foot resting on a football as he downs a bottle of beer. It seems to be a photograph detailing the pleasures of living, perhaps a nod also to the things his father enjoyed. This might also be, a sort of public “note to self”, that one should enjoy life while one has the chance, a sentiment Horsley would have surely approved of. 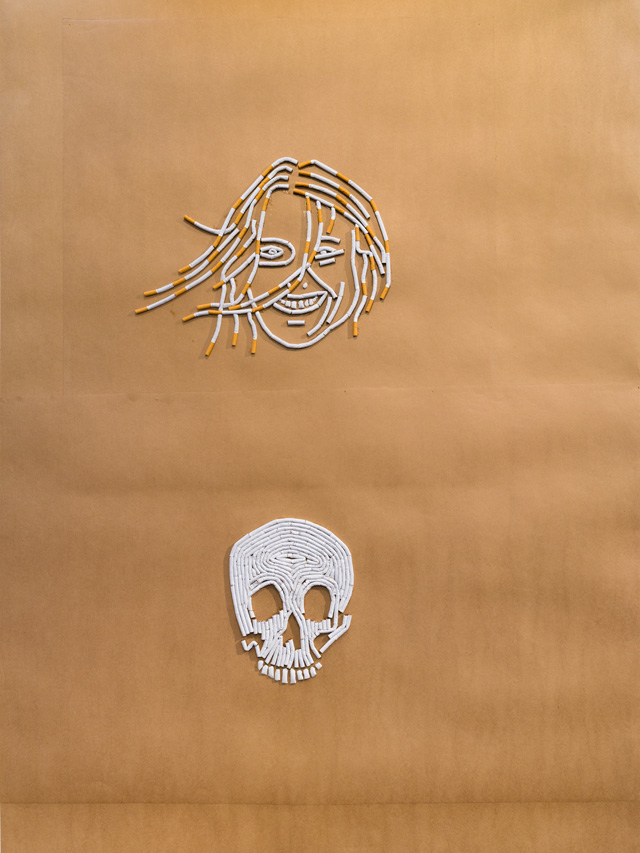 Lucas’s self-portrait, exhibited next to Teller’s, is similarly concerned with the evanescence of life. She constructs her smiling likeness with cigarettes, and below that, shapes them into a skull. Titled, In the Words of Sexton Ming, Just Remember When You smile, There’s a Skull in There (2018) Lucas’s works serves as a memento mori. It would also work well in an anti-smoking campaign. These works are reminders that what we enjoy the most may hasten our journey to the grave. Horsley might have also agreed with that. 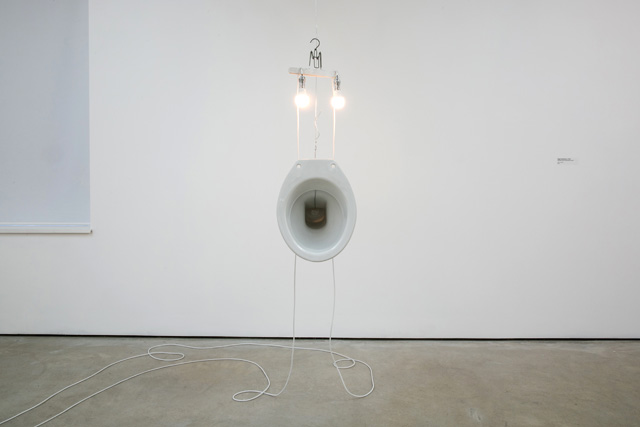 If all this sounds more than a little morbid, then Lucas’s portrait of Hambling provides us with some light relief. Two bulbs dangle from the skirt of a clothes hanger over a toilet bowl, which is transformed into a gaping vessel. Is this a face, or is this a body with two illuminated breasts and a cavernous womb? Most likely the latter. The title of this work is Magi (2012), a play on Maggi. Beyond any biblical associations, Lucas is turning her transformative power to words. Hambling reciprocated with two paintings of Lucas. The largest, Sarah Lucas II (2013), is a still life-cum-portrait. A grafted image of her friend’s face presides over the tools of her trade – the fried eggs, stuffed tights and phallic vegetables that populate her sculptures. 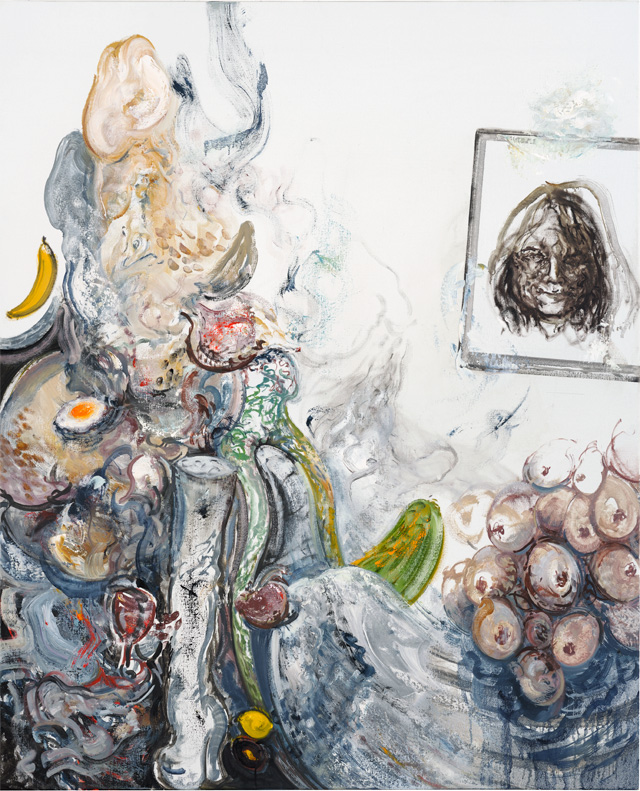 Shot through with references to religion, this is a show about death, friendship, the sacred and the profane, but most of all, it is about Hambling. Her own self-portrait is perhaps the most revealing. The longer you look at it, the more her likeness seems to lift out of the paint, and soon the squirming mass of smudgy swirls is not as formidable as it first seems. One blue eye is clear and her eyebrows are raised questioningly. Her mouth turns up almost to a smile. But she does not look directly at us. That challenging gaze captured by Teller instead looks off to the side almost coyly. There is vulnerability lurking in that strong face, a fragility that perhaps every artist in this exhibition has come to recognise in themselves and each other. 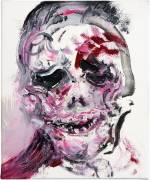