This group show of contemporary art at the Henry Moore Foundation considers the interior and exterior space of the body, its encompassing nature as a vessel and the places it inhabits. Within their forms, works manage to occupy, reveal and conceal varying densities of void.

In a juxtaposition with the work of Henry Moore, artists experiment with similar techniques of displacement and abstraction, while bringing new materials and concepts into materiality. The exhibition is set across the grounds of the Henry Moore Foundation, located at Moore’s old home in Hertfordshire, with two indoor exhibition spaces and a sculpture park. When grass is wet underfoot, sculptures either soak up the moisture, darkening in colour, or droplets form glassy balls on their surfaces. Rainwater fills up empty dimples and the British countryside is a comfortable setting for Moore’s works. Inside, works on paper offer another mode of visualisation, from tracing thoughts to telling stories, which cross dimensions from the imagination to paper and into realisation, filling their destined void in space.

Moore’s work is the starting point of the exhibition, with the figurative curves and dips of his sculpture synonymous with the words “body” and “void”. The extent of Moore’s influence is apparent in the selected works, which echo one another in material, shape and subject. Many of the artists even show direct reference to Moore within their work. Using an uncanny material for a clever copy, Sculpture by Henry Moore by Beuys (1961) by Joseph Beuys is an elastic band twisted at junctions like a figure eight into the shape of a reclining Moore sculpture. In a parallel play on scale, the sculpture is protected by a matchbox-sized cardboard box. Bruce Nauman’s 1966 Seated Storage Capsule (for Henry Moore) is an illustration on paper of a bespoke container for a Moore sculpture. Shaped rather like a cello, it is a specific void for the sculpture to inhabit, coloured in peach, lavender and yellow. With one arm at an angle and legs bent at the knees, Bruce McLean copies the pose of Moore’s Maquette for Fallen Warrior (1956) in his 1969 black-and-white photograph of himself, Fallen Warrior (1969). McLean is uncomfortably positioned, caught in a moment of lost control and photographed outside on a plinth like Moore’s sculptures. Paul McDevitt’s Sculpture in a Landscape (2003), made with coloured pencil on paper, shows a gaudy firework display exploding above a Henry Moore sculpture. McDevitt also recreates Moore’s Interior Figure (1939-40) in woven wicker, wood and concrete, where the new material completely changes the expression of the form.

Moore’s stylised and abstract, yet still strongly figurative, treatment of the body is echoed by artists in the exhibition, who also take on unique styles of sculpting the body. Thomas Schütte’s sculptures Stahlfrau No. 1 (2000) and Bronzefrau Nr 3 (2000) are complicated and entangled, in complete contrast to Moore’s work, where limbs double and torsos distort into complex psychological portraits. Smooth edges and undulating curves synonymous with Moore’s work echo in the works of Tony Cragg. Cragg’s Early Forms St Gallen (1997), a sculpture in bronze with a blue-and-green tinted hue, forms ripples and flows in bulbous motions, like an intestine, a phallus or a foetus. Similarly to Moore’s figure, the sculpture opens up internal inhabiting spaces within its form. Two internal ponds collect stalks and daisies, which float on a little puddle of rainwater. The aesthetic of the body is referenced less directly still in Sarah Lucas’s work. Her piece Nud Cycladic 6 (2010) is made of nylon tights, synthetic fibre, breeze blocks and steel wire, yet its form, like Cragg’s sculpture, is very human. It wraps itself up like an intestine that twists and knots, digesting something fiercely emotional. The tights are a membrane of stretched skin in an insipid flesh tone. Displayed close by is Moore’s Mother and Child (1967) made of rose aurora marble, whose colour – light pink with mottled orange imperfections – also references skin. Despite the hard, cold properties of marble, the surface is warm and soft.

The body itself encompasses a void, giving it the function of a vessel, which artists in the exhibition investigate. Damien Hirst’s Mother and Child Divided (originally 1993; exhibition copy 2007), reveals the animal form as a vessel for organs and offspring. Bisected from head to hoof, all the voids and matter that make up the cow are revealed. Stagnated in growth, the glass formaldehyde tank acts again as another vessel, that of preservation. Moore’s bronze Divided Head (1963) also has layers of outer protection; an abstract skull is suspended within a protective helmet. Standing Figures (1940), also by Moore, is a painting in brush and ink that shows red, green and yellow figures standing like mummies in a museum, or stacked Russian dolls, each one a vessel for her sister. So what voids does the body inhabit? Rachel Whiteread’s work looks at the measure of space within houses, buildings and objects, which she fills with concrete to solidify the mass. In this exhibition, her work Detached 3 (2012) captures the density of a traditional garden shed. The work, with its diagonal slats of wood and slanted roof, is comfortably placed at the bottom of Moore’s back garden. It is a space associated with DIY, storage and also a strange sanctum of leisure.

Other artists involved, including Keith Coventry, Anish Kapoor, Antony Gormley, Roger Hiorns, Simon Starling and Richard Long, show works that provide original insight into the theme in a continual interrogation of the body and the void it inhabits. In a reverent nod to Moore’s sculptural legacy, these artists, whose work is translated and interpreted across mediums and concepts, have Moore as a muse. It is always Moore’s works to which the viewer returns, contemplating the cycle of life, living, nature and mortality through the physical and psychological shape of the body. 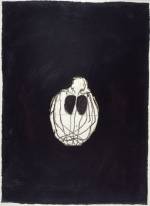 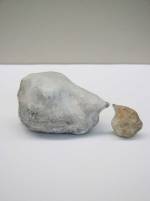 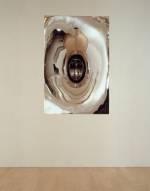 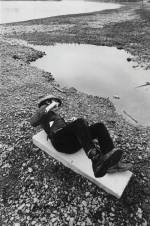 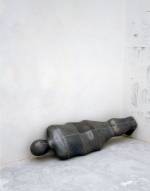