The Pot of Gold at the Other Side of the Atlantic. Cecil Beaton: The New York Years

The Pot of Gold at the Other Side of the Atlantic.
Cecil Beaton: The New York Years

Cecil Beaton’s love affair with New York City began when he sailed from his native England into New York Harbor. The year was 1928 and he was a starry-eyed 24-year-old looking for what he later called “the pot of gold at the other side of the Atlantic”. His expectations for the new venture were high; fueled by author Beverley Nichols’s descriptions of a Brave New World waiting to be conquered. Soon, Beaton’s infatuation grew into a full-fledged romance with New York’s high society.

Although Beaton’s acclaim as a photographer and designer began in England before he finished at Cambridge – British Vogue published his photographs of a 1924 student production – his association with aristocratic bohemians, called the Bright Young People, was tenuous. His father was a lumber merchant, albeit a wealthy one, and Beaton (like novelist Evelyn Waugh) acutely observed his friends’ mannerisms, prejudices and turns of phrase. He mastered them in hopes of leaping from the middle class to the aristocracy. Unfortunately, the gatekeepers would never completely open the door to him. Quick-witted, sharp-tongued Beaton would always be on the edge of things as he photographed, wrote about and socialised with the upper crust.

So New York was, in many ways, a more perfect arena for his social and professional ambitions. He charmed the city’s wealthy patrons with his impeccable style of dress and Edwardian sensibilities. Born in 1904, Beaton had an enduring vision of life coloured by the Edwardian era. He proclaimed that New York was “eggs-ill-ahh-rating”, and ran full speed on its robust economy, just prior to the stock market crash, and thriving entertainment industry.

Beaton maintained a home in England, but until his death in 1980 he spent much time in New York, living in rooms that he decorated for some of the city's top hotels. English to the core, he was a New Yorker in means and aspiration. His ability to recreate himself and repurpose his work in articles, books, photo shoots and new social connections was uncanny. He knew how to fan the flames of celebrity by producing seductive images and copy and associating with a Who's Who-worth of artists, entertainers and writers.

In 1968, England’s National Portrait Gallery gave Beaton a retrospective that broke new ground by including photos of living subjects and of people who were not British. In 1969, the exhibit travelled to the Museum of the City of New York (MCNY), where as “600 Faces” it added photos that Beaton took of Andy Warhol and the members of The Factory. Hanging photos of young, “hip” New Yorkers came on the advice of Beaton’s friend Lincoln Kirstein, co-founder with George Balanchine of the New York City Ballet.

Perhaps taking a cue from the National Portrait Gallery, which revisited Beaton in 2004, at the end of October 2011 MCNY opened a Beaton show, Cecil Beaton: The New York Years. The exhibit displays more than 200 of his photographs; sketches and drawings; set designs; costumes; vintage magazines; and collectible volumes of some of his books: illustrated diaries, histories of ballet and photography, commentaries on his world travels, etc. The celebrity of his subjects (eg Greta Garbo, Marilyn Monroe, Mona von Bismarck, Audrey Hepburn, Truman Capote, Mick Jagger, Warhol, Salvador Dali, Wallis Simpson, Maria Callas) and his relationships with them make that aspect of his work most appealing to the general public. But the show, organised by MCNY’s Donald Albrecht, curator of architecture and design, brings forward other sides of the artist’s activity with Beaton-esque aplomb.

The walls of the large exhibit space are painted a bright, energising white. Beaton-like illustrated swirls decorate partitioned areas, while one wall is painted with a 1940s wallpaper design that Beaton made for fabric manufacturer Zika Ascher. Association with the firm linked Beaton with such modern artists as Henry Moore and Matisse in the Zika Ascher line-up. (Recently, a Wiltshire-based interior design company produced a line of Beaton-inspired fabrics and wallpapers: http://www.cecilbeatonfabrics.com/main.html)

Laid out in glass cases, the vintage magazines and books are difficult to resist. Many people will long to turn the beautiful (and beautifully preserved) pages. Book collectors addicted to the lure of the rare should visit MCNY’s bookshop, where a few copies are actually for sale.

Albrecht’s catalogue, published by Rizzoli (UK£42.50/US$65/CA$68), is sectioned into genres: fashion, portraiture and performing arts, chronologically following Beaton’s career. Fashion illustration and photography primarily for American and British Vogue and Vanity Fair dominated his early years. In the 1950s, when editors and young photographers moved toward photorealism, Beaton focused on portraiture and theatre design. He once called theatre “a particularly apt medium for fulfilling our wistful cravings.” In his work for theatre, ballet and opera, Beaton fused his love of elegance, romance and historical associations into lavish affairs.

From the 1940s through the 1960s, Beaton contributed stage and/or costume designs for productions on both sides of the Atlantic. Just a few for the record are Oscar Wilde’s Lady Windermere’s Fan; John Taras’s ballet Camille; Frederick Ashton’s ballet Illuminations; George Balanchine’s Swan Lake; the Metropolitan Opera’s Turandot and La Traviata; and, of course, Alan Jay Lerner and Frederick Loewe’s My Fair Lady, on Broadway with Julie Andrews (costumes) and on the big screen with Audrey Hepburn (sets and costumes). Beaton also worked on the Broadway show Coco, starring Katharine Hepburn. Designing a show about couturier Coco Chanel was a natural for Beaton, yet it appears that after working with a tumultuous Hepburn, he resolved to retire from the theatre.

Cecil Beaton: The New York Years examines Beaton’s range from fashion and society portraiture to war photography and serious stage work while reflecting on the Beaton mystique. In the end, the man who called a variety of expensive New York City hotels home and had one of his few heterosexual relationships with an international film icon (Garbo) slips through our fingers. Still, his opportunistic love for New York is clear. One wonders if, at the end of his life, Beaton thought of his long-ago voyage. And if so, was he certain, as we are, that he found his pot of gold. 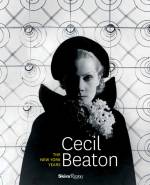 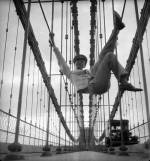 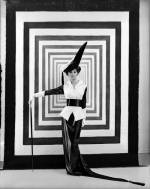 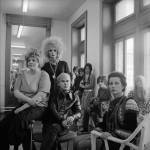 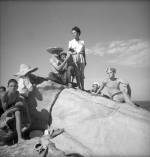 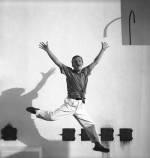 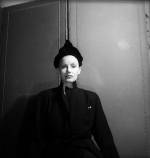 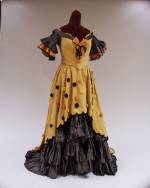 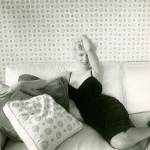