The Egg in a Box

The Egg in a Box

London's refurbished Royal Festival Hall (RFH) is this month reopened to the public with a star-studded series of performances. The 1950s design has been faithfully refurbished and improved by architects Allies and Morrison.

The RFH reopened in June 2007, celebrating a highly successful refurbishment project. Before he died, the late Sir Leslie Martin, who had been the chief architect for the project from 1951, had largely approved the revised plans submitted by architects Allies and Morrison. The initial architect for the London County Council (LCC) was Sir Robert Matthew. This had been a flagship project for the LCC under his chiefship, but the figure who really got the project going was Herbert Morrison, the Labour Party politician. He it was who had insisted that Matthew had Martin as his deputy architect, treating the RFH as a 'special project'. Completed in 1951, the building was to crown the South Bank site. So both Matthew and Martin shared credit for the project, although claims had been made, substantiated by signed drawings in the Matthew archive, that the 'egg in a box' concept for the hall was initiated by the former. Peter Carolin, Professor Emeritus of Architecture at Cambridge University, states: 'Though the "egg in the box" is clearly Martin's, from 1948 onwards commentators occasionally overstated Matthew's design role, not least in the origin of the central concept.'1

The suspended auditorium provides the building with its major attributes: the great sense of space that is opened out within the building, the flowing circulation from the symmetrically placed staircases and galleries that became known as the 'egg in the box'. And however incompletely it was realised, it is this central idea that provides the building with its major attributes … the changing spatial volumes and views that are presented from these different access levels, and within and enclosed by all this, the mass of the auditorium itself.2

One leading figure still actively in practice today is Trevor Dannatt, lately Professor of Architecture at the Royal Academy of Arts. While he proved a valuable construction critic of the current works, his attitude draws upon his experience. Now aged 87, he joined Leslie Martin and Peter Moro on the project in 1948, aged 28. Critically, his particular achievements were the stairs, the glazed screens, the galleries and the first canopy on the south side, now superseded. The latter was an elegantly tectonic, tension-wired projecting and covered lightweight structure. Rather than its removal, a fully-fledged expansion of this 'lightness of being' to a more generous width would have been more appropriate.

The achievement of the present refurbishment is to recover the original work, and to remove subsequent accretions. Great pains have been taken to restore the original colours, fabrics and ironmongery. More essentially to the 21st century functioning of a concert hall, major rethinking was done on the acoustics, by the American acoustician Larry Kirkegaard. The glass-blocked and patterned facades (so criticised by the Lutheran, Pevsner) had been removed early, in the l960s, and replaced at high cost by carefully smoothed stonework. Internally, Robin Day's original seating has been returned, re-covered and 're-fettled' (Day is still around in his 90s, beating even Dannatt). Great care had been taken in the 1950s to ensure that the door handles, stair ironmongery and doorsets, were impeccably high-quality. Now a small East London outfit (named Harbrine Architectural Hardware) came to the rescue. Four hundred and fifty doors were restored to their original specifications, as designed by Martin and Moro.

As in Morrison's 1940s concept of 'the people's place', a definite aura of that ethos emerges in the so-called 'cutlery' handles (in the main restaurant), the 'pub-style' handles (exterior entrances) and what were dubbed 'cigarillo-type' handles in the foyer, close by the auditorium. Such items will be more explicit when exhibited now at the Victoria and Albert Museum's related exhibition this month. Even the royal loo (adjacent to the royal box) has a special handle. Such was the often contradictory mood of the time. Elsewhere, Kirkegaard saw to the removal of the original sycamore-ply orchestra canopy and in its place has come an adjustable, state-of-the-art sound reflector. Could this have been the eviction of the then prevalent romantic affiliation to Scandinavian 1930s design? Certainly Asplund's 1936 courthouse was an influence. As for Aalto, all this came later. Although Martin admired Aalto and visited him in Finland in 1961, subsequently hosting him in Cambridge, the latter's own auditoria, designs such as the Culture House in Helsinki (1952 design) and Essen Opera House, (1959 competition design) were rather after the event for Martin. But the mutual benefit of the contact between Aalto and Martin could have enabled Aalto to benefit from some acoustic feedback for Finlandia Hall, Helsinki (Aalto's own acoustic solutions were not always successful), and there might have been an Aalto building in Britain - Martin certainly tried to arrange this for his friend, without success.

The 'people's place' ethos that so inspired Herbert Morrison was totally understandable in the post-war British austerity context of 1948. The Berlin airlift was on, food rationing was still the rule, and Morrison did all he could by backing the Festival of Britain to dispel the gloom by 1951, creating a celebratory mood. The Mark 1 Ford Zephyr cars and Morris Traveller estates that were coming on stream betrayed the inherent contradiction in the British approach to industrial design. So the Martin design team achieved a massive fulfilment of what Morrison sought to demonstrate. The fact that his grandson, Peter Mandelson, was the minister in charge of the disastrous Dome structure further along the river and its failure both economically and architecturally cannot be laid at Mandelson's door entirely, but Morrison would have had a few words for it.

London this month celebrates the reopening with high-quality musical performances and a hubris that will complement the architectural achievement that architects Allies and Morrison have renewed. London has back its own concert hall, half a century older and wiser. Simon Rattle strikes up, not to mention Alfred Brendel, Brian Wilson and the Ballet Boyz. It's all on at the RFH. 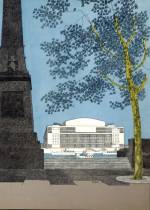