With glimmers of a cloak-and-danger cold war thriller, this look at the US artist’s 1958 UK debut considers the gallery design, remarkable for its time, and the murky matter of Pollock’s secret CIA support 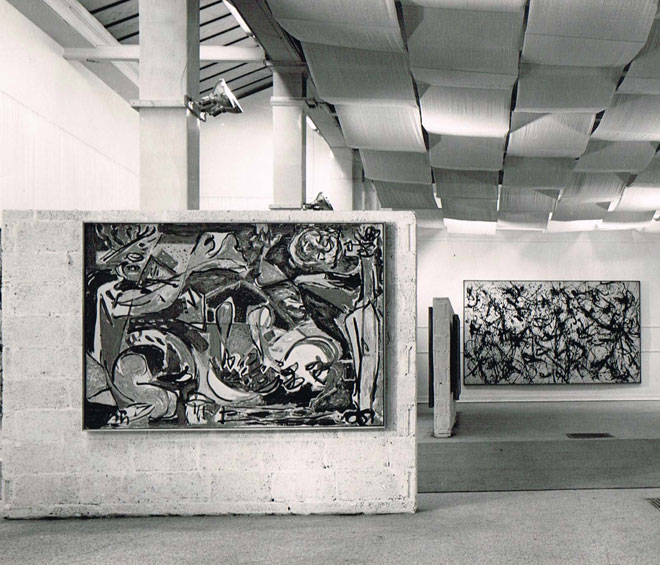 “The modern artist”, Jackson Pollock famously said, “is working and expressing an inner world – in other words expressing the energy, the motion and other inner forces.” With the benefit of hindsight, revelations by former CIA staff, and the material collected together for the exhibition Staging Jackson Pollock at the Whitechapel Gallery in London, it seems that the “forces” behind the painter’s work extend to government intelligence agencies, too.

This year is the 60th anniversary of Pollock’s premiere on UK soil. A touring show arrived at the Whitechapel Gallery in London in 1958, having first opened at the Museum of Modern Art in New York, following Pollock’s death in 1956, and subsequently at the Berlin University of the Arts. To mark the occasion, the Whitechapel is holding a modest exhibition that reflects on the organisation behind the original show: the gallery design, the administration and the murky matter of Pollock’s secret political support. The centrepiece is Summertime 9A (1948), a five-metre long painting included in the exhibition of 1958, in which a central band of exuberant black squiggles is surrounded by areas of yellow, blue and burgundy – colours attached to the action like loose clothes on dancing bodies. The painting was made during Pollock’s heyday using the “drip” technique, a short period of art-making between 1947 and 1950 that would come to define his legacy and make him a household name.

A small selection of archival material is also on display – typewritten letters between Whitechapel staff – along with a recording of an interview between Trevor Dannatt, the architect who designed the original exhibition, and Nayia Yiakoumaki, the current archive curator at the Whitechapel Gallery. Their conversation sheds light on the political climate of the cold war, in which the exhibition took place. Dannatt’s account of travelling to Berlin with the then-director of the Whitechapel Gallery, Bryan Robertson, to see the works that would eventually come to London, shows how high east-west tensions were running. As they flew over Soviet air space, he recalls, Robertson was sweating with nervousness. On arrival, however, the mood soon changed. The pair “were well received by the sponsor” of the travelling exhibition, Dannatt says. “They were CIA, probably.” 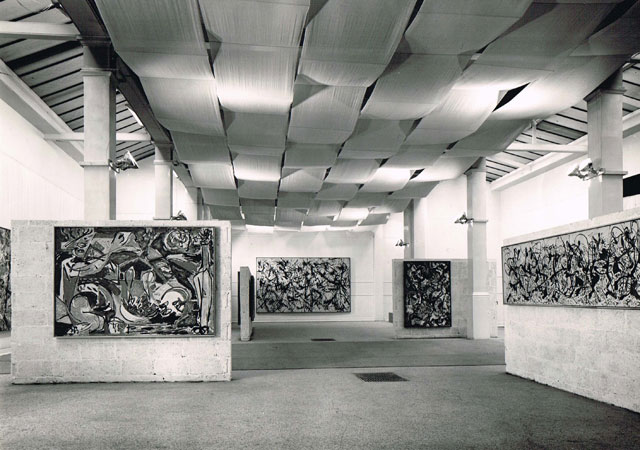 Suspicions of CIA involvement in the successes of abstract expressionism have been doing the rounds for some time, but it is only recently that they have begun to be widely accepted. In a 1973 article for Artforum, the critic Max Kozloff described the way the movement had been used as “a form of benevolent propaganda”. For many at the time, however, the suggestion appeared absurd. The artists themselves were often known anarchists, and prided themselves on their anti-establishment credentials – and therefore seemed unlikely candidates for clandestine support, especially from a government openly hostile to the avant garde on home soil. “Modern art is actually a means of espionage,” said Harold Harby, a Los Angeles council member from 1939 to 1942, espousing McCarthy-tinged paranoia. “If you know how to read them, modern paintings will disclose weak spots in US fortifications, and such crucial constructions as the Boulder [now Hoover] Dam.” 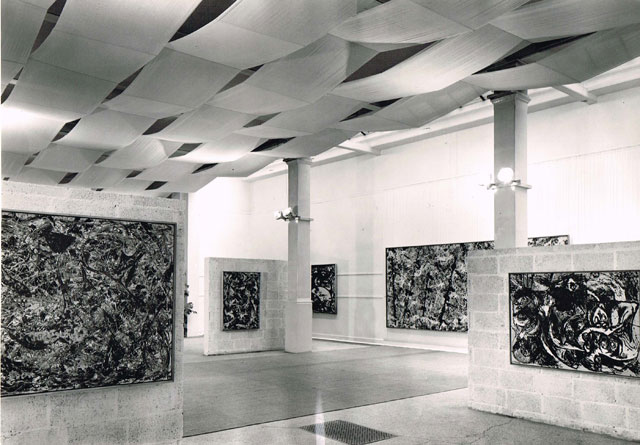 In contrast to philistine attitudes back home, the CIA had a dynamic, intellectually engaged vision for the role of modern art in promoting US interests abroad. From the outset of its foundation in 1947, the intelligence agency considered the arts a powerful and necessary tool for luring US intellectuals away from communism. The Propaganda Assets Inventory was created to exert influence over the western media by promoting anti-communist sentiment and pro-individualism in the arts. In 1950, the International Organisations Division was born, funding, among other things, the production of the 1954 animated film of George Orwell’s novel Animal Farm, and throwing its weight (and finances) behind abstract expressionism. 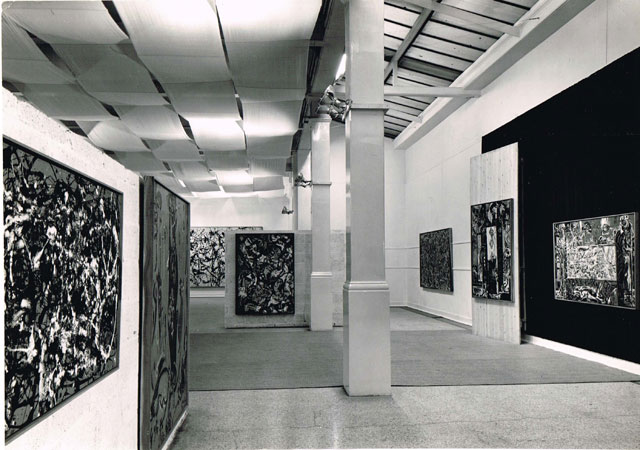 The reason for the CIA’s involvement? As the former CIA case worker Donald Jameson put it, the agency “recognised that abstract expressionism was the kind of art that made socialist realism look even more stylised and more rigid and confined than it was”. As an emblem of extreme individualism, it was rolled out on the global stage as an advertisement of the freedoms granted by western capitalist democracy. (Conspiracy theorists may be disappointed to discover that the artists receiving political support were likely to have had little clue what their art was being used for. This is because the CIA deployed a tactic called the “long-leash”, whereby their involvement took place from a point of remove sufficient that it was undetectable to those who benefited from it.) 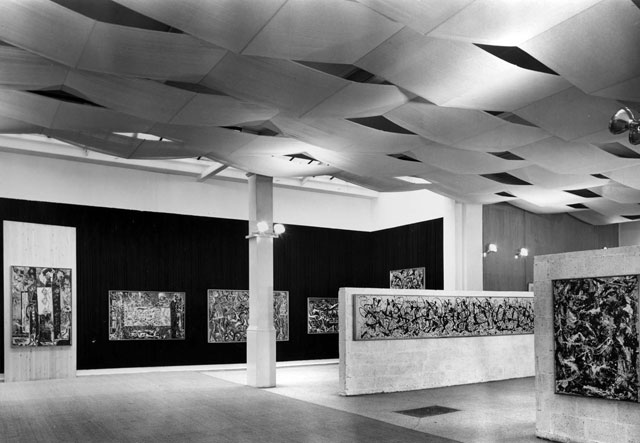 While the full extent of the CIA’s involvement is still a matter of debate, it is worth remembering that government agencies routinely promote their cultural interests abroad today. Such a practice can be seen in the global rise of the biennial, a form of soft, national propaganda; in organisations such as the British Council, which funds the promotion of British cultural values abroad; and in the embrace, in the west, of artists who openly criticise rival ideologies. (The extent to which Ai Weiwei has become a fixture in British institutions, for example, may speak as much to his value as an artist as to the wishes of institutions to signal their own political standing.) 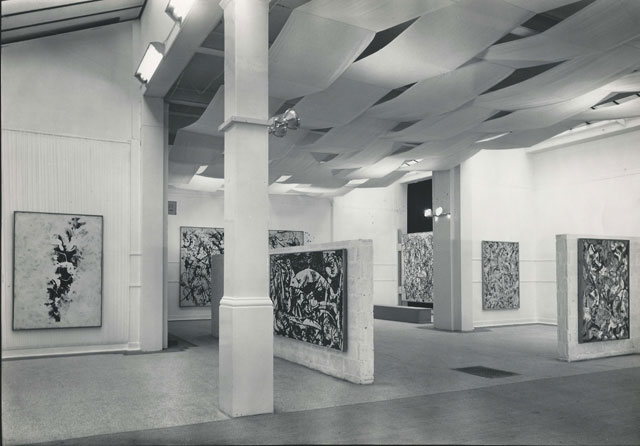 Staging Jackson Pollock has more to recommend it than glimmers of a cloak-and-danger cold war thriller. When Dannatt designed the 1958 exhibition, he aimed to create a “total artwork” that united the interior of the gallery and Pollock’s paintings into a single whole: a bold and remarkable intervention by today’s standards when the white cube reigns supreme. Dannatt was inspired by the German-American architect Ludwig Mies van der Rohe’s theory of minimal, “skin and bones” architecture, the theatrical spirit of the Festival of Britain of 1952 – for which Dannatt designed a tea stand – and the modernist interest in the grid. He divided the Whitechapel gallery with breeze-block walls on which to display Pollock’s work, attached drapes of fabric in rippling waves to the ceiling, and carpeted the floor in gridded sections. Images of the original installation are pasted on to the walls of the Whitechapel Gallery, offering a tantalising glimpse of an extraordinary vision in equally extraordinary times.