Jamie Fobert Architects’ new wing for Kettle’s Yard in Cambridge opened this month, doubling the education space and bringing its facilities bang up to date. How harmonious is the marriage of this incisive 21st-century building with the Georgian and modernist originals? 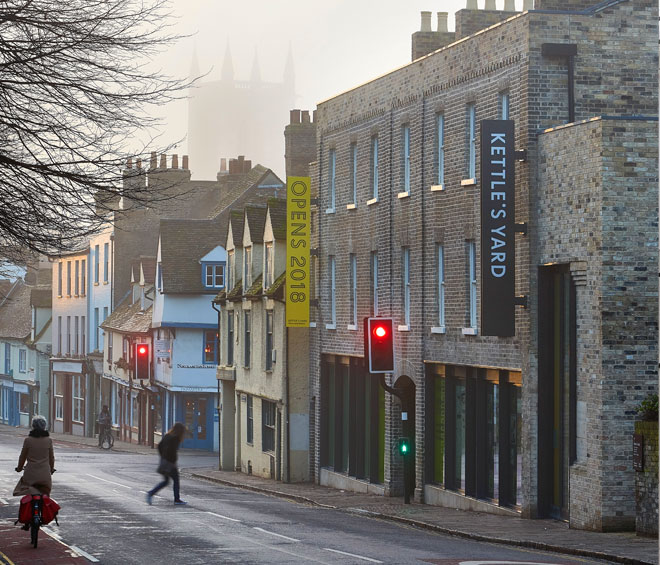 Kettle’s Yard has always been about alchemy, serendipity, poetry - the juxtapositions of unlikely objects to make new and delightful connections: a midnight blue Joan Miró over a luminous cut-crystal decanter, poised on top of a burnished wooden cider press; the placement of a pale-yellow lemon on a pewter plate. This Cambridge gallery, which started out in 1957 as four derelict Georgian cottages converted into a home for former Tate curator Jim Ede and his wife Helen, has also been about exquisite taste. Ede knew how to pick his artists – he championed Barbara Hepworth, Miró, Ben and Winifred Nicholson, Naum Gabo, Henry Moore and many others, back when modern art was either stolidly resisted (by the UK art establishment) or hung in characterless, vast, white rooms. His genius was to insert this work – charged with shifting social, aesthetic and political allegiances - into the framework of his carefully considered furnishings and finds as if there were no hierarchies: a droplet of blue glass hung in a round window frame, or an arrangement of pebbles, offers a meditative moment every bit as serene as the smooth contours of a Hepworth nearby. In this way, you could say, he normalised – domesticated – contemporary art, softened its prickly, abstract, opaque or expressive edges. 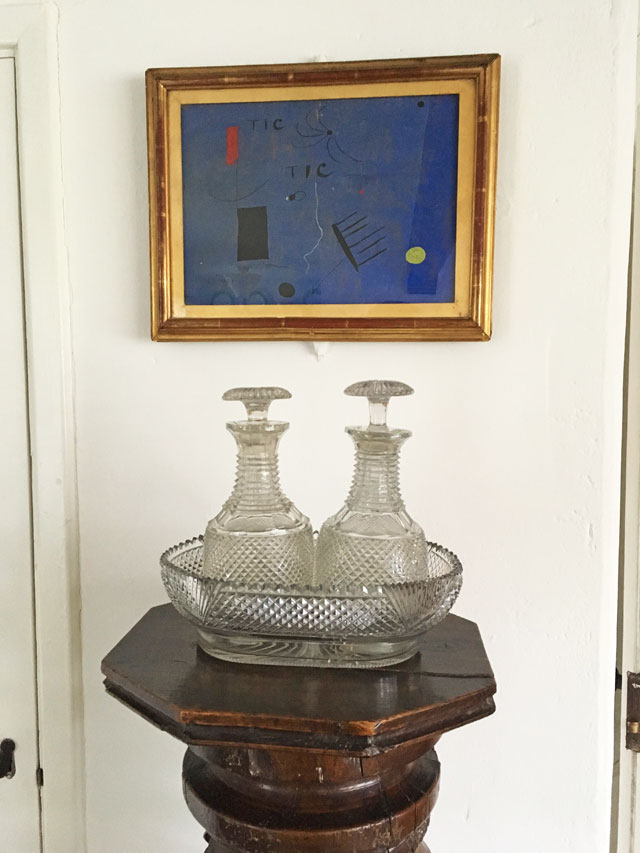 Given Gabo’s and Nicholson’s friendship with architect Leslie Martin – together, they had founded Circle, a modern art and architecture publication in 1937 - Martin was an obvious choice when Ede and his supporters realised the gallery needed a bigger, more hospitable wing, once the Edes decided to hand the house and their collection over to Cambridge University in 1966. But even the severe, double-height extension that Martin and his colleague David Owers completed in 1970 becomes a thing of normal – albeit gracious – living, filled with Ede’s choice of art and his shabby-chic furnishings. Floppy sofas, faded antique rugs, a grand piano and that delicious top lighting from Martin’s trademark rooflights carved into the ceiling - this extension oozed welcome and bohemian sophistication, hosting musical performances and events that became a crucial aspect of Cambridge cultural life. 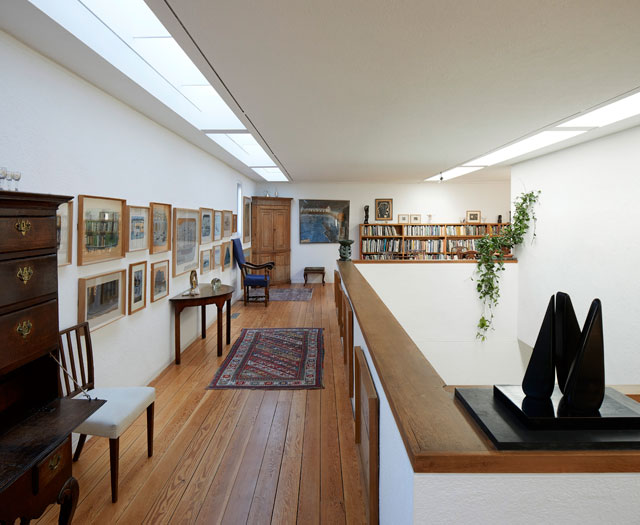 For these reasons – Ede’s talent at marrying the shock of the new with the ease and grace of the old and familiar - Kettle’s Yard is about as close to hallowed ground as it gets for architects and art lovers. And now this collection of converted cottages and their 70s addition have been joined by a thoroughly 21st-century, £11m extension, courtesy of Jamie Fobert Architects, newly annointed architect of the National Portrait gallery’s forthcoming £35.5m refurbishment and author of the recently opened extension at Tate St Ives. 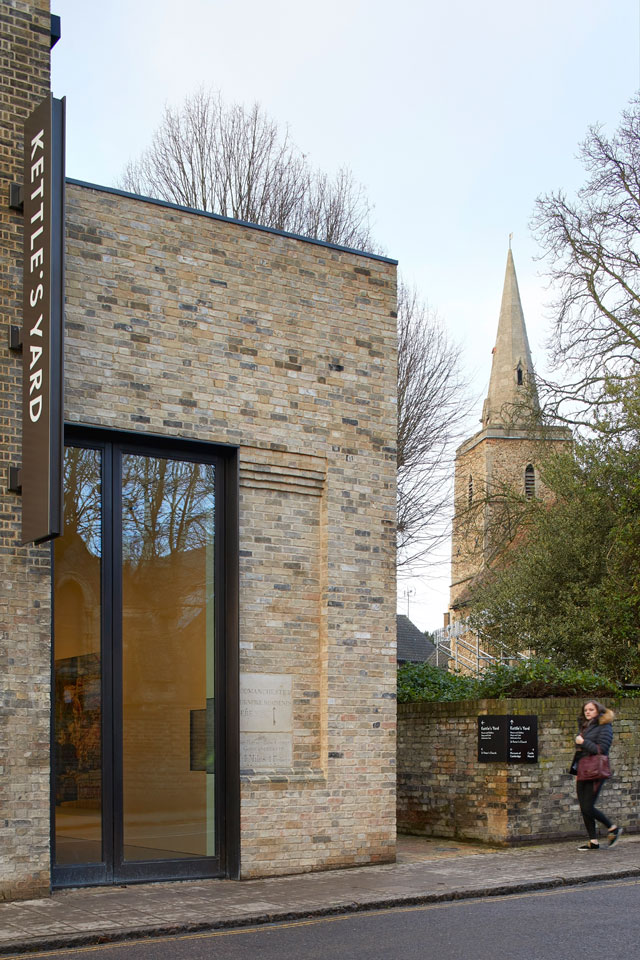 Fobert’s previous work is characterised by a materiality sympathetic to, but quite different from, the Kettle’s Yard aesthetic: yes, there can be beautifully detailed brickwork – of which Martin would have approved - but his projects are mostly boldly sculpted spaces carved out of concrete, glass and slabs of solid steel and bronze. His brand of contemporary modernism has a harder, more muscular edge to it than that found in Kettle’s Yard’s 20th-century addition. Fobert himself, while touring journalists and critics around the buildings, described Martin and Owers’s contribution as typical of that postwar period “where mid-century modernism became more soft, more gentle, very careful, very interested in natural materials, volume and light, and very unassuming in terms of its materiality”. 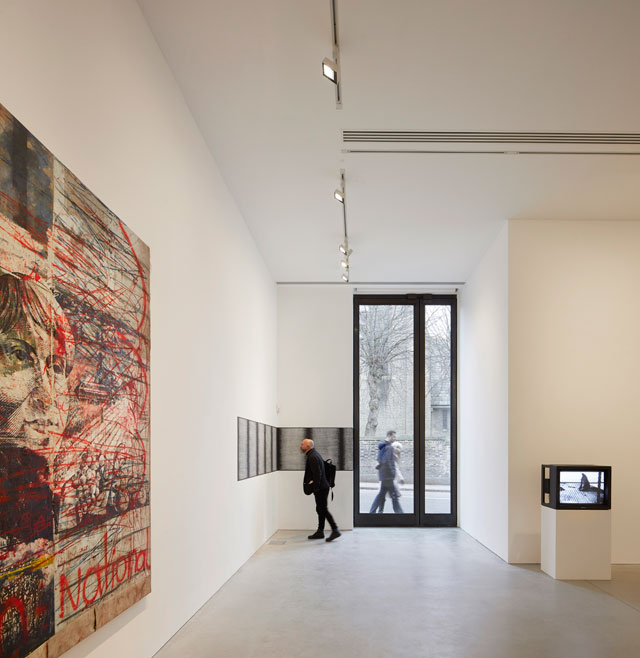 There is nothing unassuming about Fobert’s extension – at least, on the inside. The new wing is all decisive, clean spaces of concrete, timber, brick, bronze and glass. But on the outside, it is mostly clothed in the language of the past; the buildings that front on to these ancient streets have had their Georgian brick facades rebuilt pretty much as they were: thanks to the planners’ conservation-centric concerns, even chimney pots have had to be replaced, despite there no longer being any fireplaces to warrant them. As the builders removed the walls on to Castle Street, says Fobert: “They took every brick off in sequence and put them on palettes, and then rebuilt the wall exactly as it was.” 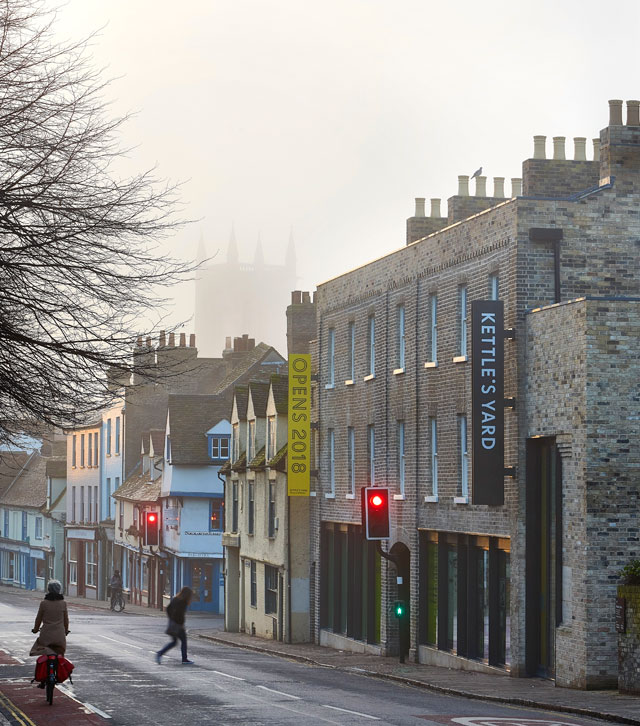 In planning this new incarnation, Fobert took inspiration from Ede’s writings, especially a description of the gentle transitions through each room and between buildings, and the way the house “develops in easy and individual stages”. Fobert says: “This idea of generosity and easy and individual stages was the kind of thing we wanted to achieve. There is such a seamless movement from the cottages into the house. Most people have no idea they have left Georgian cottages and arrived in a 1970s modernist masterpiece.” 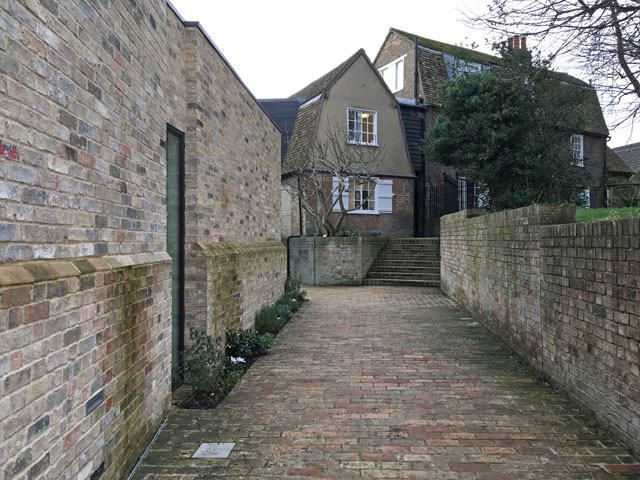 Those transitions, in the form of views and thresholds, have been nicely judged between this “masterpiece” and the new wing. There is a pleasing meeting of old courtyard brick with new inside Fobert’s entrance. Framed in black patinated bronze and glass, this wide entrance foyer has been built out into the tight courtyard that connects the different buildings in such a way as to make legible the multiple parts of this whole modern/modernist wing; a nice contrast with the tight and tricky circulation routes of the past. Huge glass doors open on to a wooden slab of a welcome desk, with a brightly lit shop and a cloakroom beyond. The 1970 extension of Martin and Owers is clearly visible ahead, with a small cafe tucked away in the right-hand corner. Immediately to the left, the brick floor extends to the edge of the foyer, then turns cleanly to concrete for the ramp and short staircase that lead down to the new galleries and education space. 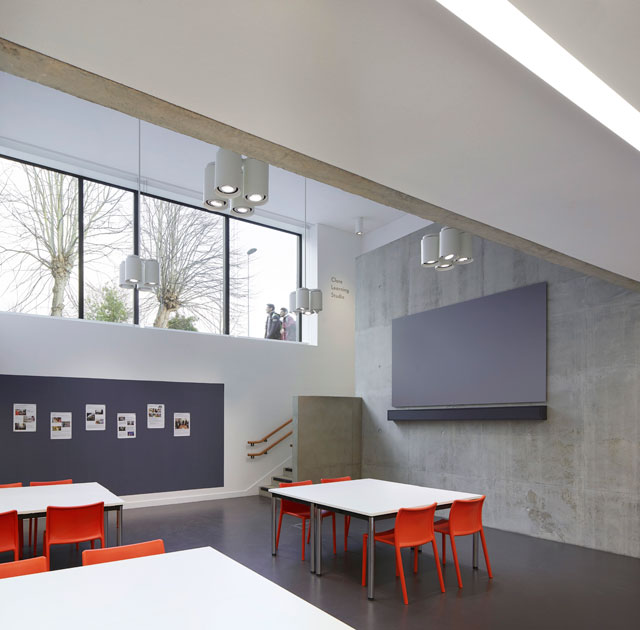 These new galleries are taller – at 4.4m, they are twice the height of the 1980s additions they replaced – more crisply detailed, more accessible and infinitely better lit. Long, deep rooflights have been inserted in the ceilings, replicating precisely the proportions of those in Martin and Owers’s extension, albeit on a larger scale. The new street-facing gallery has a double-height glazed door, which links the gallery to the passing pedestrians and allows huge works to be lifted in and out. The gallery’s new concrete floors are robust enough to handle a 10kN load, says Fobert, “so it could take a Richard Serra now”. These floors have a crude, honest materiality in tune with Martin’s favourite brick, while Fobert’s trademark material – mild steel – appears in a dramatic, zigzagging staircase that sculpts out the circulation space between the new wing’s upper floors; its edges and joins are left tactile and raw. 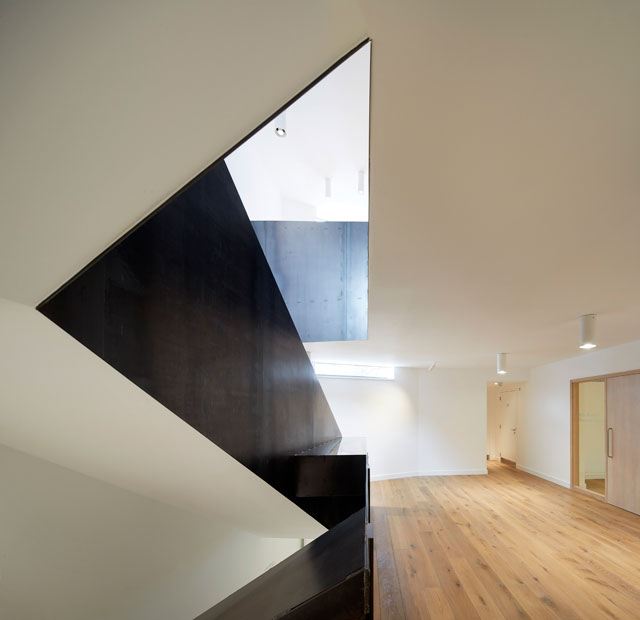 There are interesting angles, in tune with the nooks and crannies of the old Kettle’s Yard. A comfy window seat extends from the steel stair frame at the stair’s top, with a large window looking into the adjacent churchyard, where Nathan Coley’s new artwork broadcasts: The Same for Everyone. Another new view has been opened on the opposite side of the stair, linking this complex to the spires of nearby churches and college chapels. 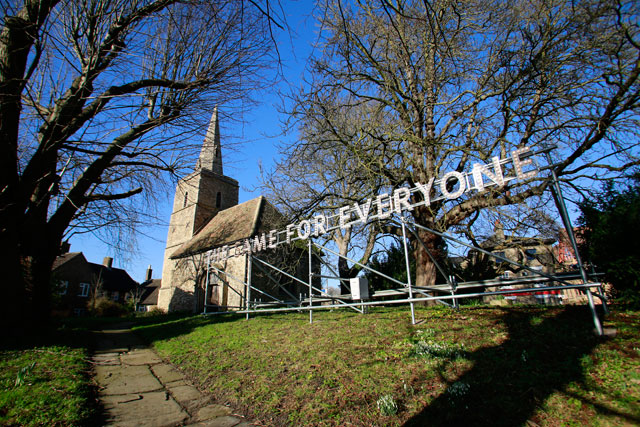 The Same for Everyone, Nathan Coley's commission for the churchyard.

There is a sympathetic use of wood (lovely hand-turned handrails throughout), and tasteful shop fittings that echo the simple domestic shelving and dining arrangements in the cottages. And the double-height generosity of Martin and Owers’s original extension finds an echo in the splendid education room and kitchen that has been dug into the basement – a further 1.5 metres of ground was excavated, right under the shop and foyer, to expand education capacity by 200%. In doing so, Kettle’s Yard gains an additional event space, and another new connection with the street, thanks to large windows at ground-floor level that reveal the interior activities (although blinds can be pulled down to maintain privacy for school events). 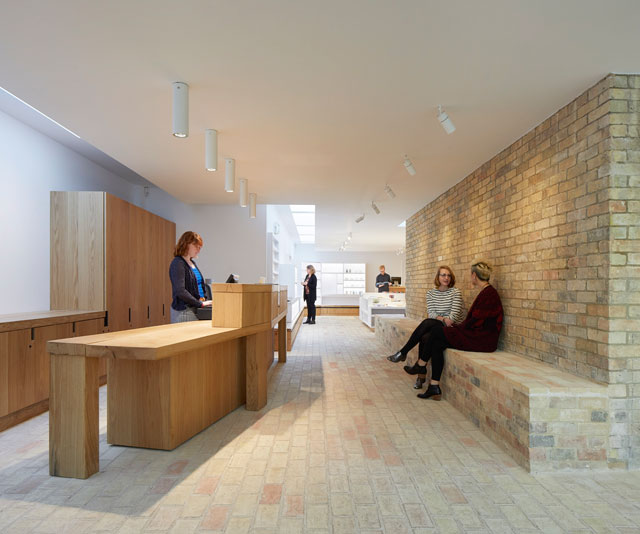 The folding of each generous-seeming space into this tight footprint, and within the profile of the former Georgian cottages, is little short of a miracle, squeezing every ounce out of the 1,000 sq metres of extra space. The scope and scale of the new wing and also the slow percolation of ideas and sensibilities has undoubtedly been facilitated thanks to the project’s lengthy gestation. Fobert was first appointed to create just a new education block, in 2004, by the then director Michael Harrison. However, the project was delayed and then, thanks to injections of new funding, the gradual acquisition of all the adjacent buildings, and a new director, Andrew Nairne (after Harrison’s untimely death), the refurbishment grew into this much more ambitious scheme. It involved demolishing every building except the cottages and Martin and Owers’s 70s addition, bringing the new scheme right up to its margins. 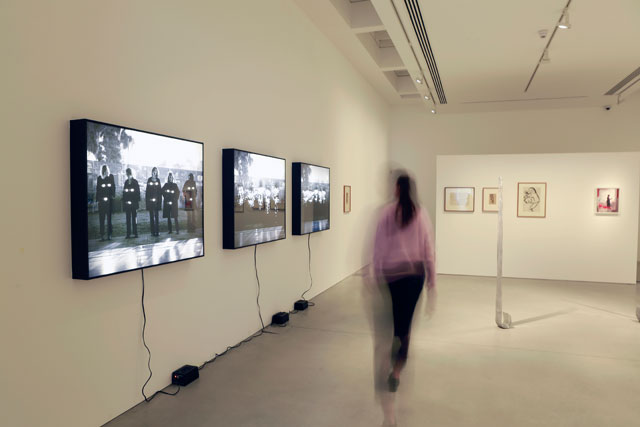 Because there was no way to get building supplies in via any of the smaller, busier side streets, it was necessary to crane it all over the top of the cottages. This forced an opportunity for the original buildings to be closed – for the first time in more than half a century - emptied, and gently restored. Apart from the whiteness of newly painted walls, and the bright, warm tones revealed in Leslie Martin’s beloved brick floors – which had darkened to almost black over the years – you would hardly know the original spaces had been altered (although there have also been major improvements to insulation, heating and air handling). Every pebble, lemon, platter and painting has been replaced in these spaces exactly as they were when the buildings were last open. Even the route to the cottages remains the same – up the brick path and in via a bell by the cottage’s tiny door. While welcoming the chance to rediscover old serendipities and the elegance of Ede’s interior arrangements, I question this obsessive duplication of the Kettle’s Yard of old; it smacks slightly of ossification – a sense of the original house and gallery as museum-pieces, rather than living, breathing examples of how contemporary art can enrich the modern home, as the Edes first intended. When questioned on this, Fobert says: “Jim moved things around for 40 years. But, near the end of his time here, things became very fixed because he felt he’d achieved an equilibrium between these different objects.” 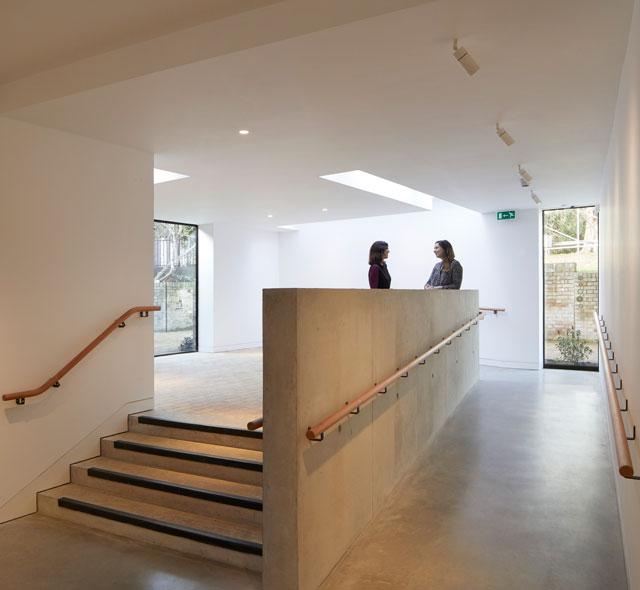 There are some uplifting new artist interventions, inside and out, commissioned for the opening exhibition, Actions. The image of the world can be different. Cornelia Parker chose the small suite of rooms where Helen Ede would take refuge while Jim was entertaining visitors to create a stippling of white blobs on their windows, using clay from the cliffs of Dover; like the clay imprint of a lace curtain, they evoke both privacy and delicacy. 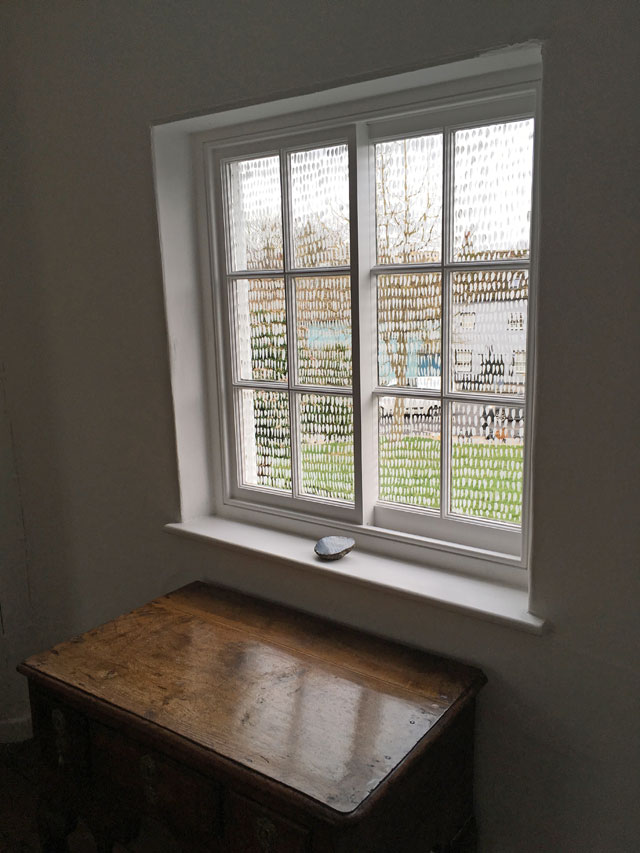 Edmund de Waal’s offering, Letters from Paris, II - two small, dark enclosures, fastened to a downstairs wall and each featuring one inky vessel – strike an odd note, albeit only in their display: they were meant to be unglazed (as depicted), but at the opening had been sealed with glass – to prevent theft, presumably - and consequently have a shiny, “do not touch” exclusivity to them that jars in a place where being an elbow away from an unprotected Gabo or Constantin Brâncuşi is all part of the thrill. 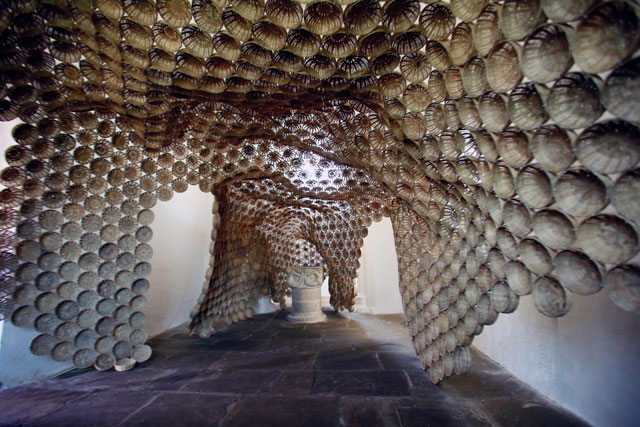 Ultimately, does Fobert’s new structure continue in the tradition of Martin and Owers’s addition – seamlessly enriching the experience of the art and the space while keeping the architecture in the background? Probably not. But neither was that Fobert’s intention. As he told the preview visitors: “In his very last interview … the interviewer said to (Ede): ‘If you had more money and more time, would you continue to buy European modern art?’ And Ede said: ‘Yes, of course I would. Oh, and I would build a big new gallery.’ So when we read that we said, OK we’re in the clear. They are meant to have quite different characters.”

• Actions. The image of the world can be different is at Kettle’s Yard until 6 May 2018. 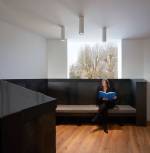