Comparisons and parallels will inevitably be drawn about this new, and very private house designed by nonagerian British architect Trevor Dannatt RA. Despite a prolonged and successful career Dannatt has personally eschewed publicity and promotion. But today in 2012 it is inevitable, given the critical interest this swansong project has already raised in the architectural press.

It happens that distinguished practitioners do reach advanced years almost by stealth. And if then documentation has any purpose, quite apart from society’s “honoraria”, it remains the responsibility of key journals to address such cases. This private house has been protracted in gestation and completion – and now stands as tribute to a benign and inspired client, and Dannatt’s own long-term and exemplary architectural London practice, Dannatt Johnson.

Leslie Martin had in his own monograph1 quoted Sir Ernst Gombrich to say that, ”a man can only be creative in relation to problems that he seeks to solve working… within an established medium” and also by extension “in any work where the professed aim is to create an atmosphere… creating a mood rather than transmitting a meaning”.2 From Dannatt’s key early house commission, the Laslett House, Cambridge (1958), inspiring to subsequent generations (even virtually cloned in Scotland recently) the architect has striven to achieve this familial atmosphere: even within their home, to living with the family over a short period. One recalls his outstanding Pitcorthie House, Fife, Scotland (1966) which, similarly to this new house, nestles amid mature hardwoods and likewise stands on a previously accommodated and ancient site with a clear view down to the Firth of Forth3 with a courtyard place of a simpler, linear plan disposition.

Today, 45 years later Pitcorthie still celebrates modernity, within a somewhat conservative community and the age-old yet contemporary essence of family life. From the start in southern England with this new house, it was somehow implicit that Dannatt would replicate such a “mood” and achieve a realisation of this individualising entity concealed within the West Sussex woodland and so his design still quietly resonates with this embodiment. The site is indeed exceptional, even in the afforested topology of downland West Sussex. An existing house, at first to be retained, was eventually discarded as the “parti” and benign meaning of the new building evolved before an enthusiastic client in drawn form. The ancient oak trees around the site and the forest context and open views have remained intact. It would be peremptory to assume that the influence of Alvar Aalto, and notably his Villa Mairea (1939) was a factor in Dannatt’s design philosophy. Whilst having long been an admirer of Aalto, he was careful not to let that early revising modernism prevail unduly. For one thing, this English site was as “English” in context and different in outlook as was that at Mairea with which Aalto was presented, itself so redolent of Finland’s wilder forests, although that element is naturally moderated by skilled and relevant planting today.4

Aalto’s vision of his beautiful client Maire Gullichsen descending the stairs was not replicated exactly but the occasion presented by Dannatt of these new stairs, located laterally to the similarly placed entry point, must have been compelling. In that initial situation, the genesis of the plan was perhaps prompted. In fact, looking at the disposition of the plan, as with Mairea, that early placement was pivotal. From that welcoming entrance, perhaps less directly, flows the internal layout: the salon and its library ante-space to the “right”, within its own cubic block and so then to the “left” by logical movement on to the central spaces for family and guests: the separate study is intended to facilitate this progression (symbolic chimney hearth to the left with sitting area; naturally well-lit kitchen area conveniently sited to the right). A degree of complexity here accrues, perhaps the product of a zealous office? This progression is actually a fairly sharp right-angled shift in direction. The pivotal interior punctuation Dannatt subtly articulates, firstly by an adjacent void (as also requested by the client) neatly opening up to the first floor, and secondly by a single column centred within the double-spaced opening – as if one’s guide had simply touched an elbow subtly to direct the guest. (The single column was also an occasional Aalto device.) A family/guest space of some formality, denoted as “dining room” but openly revealed, points up the southward view through the windows and so across a covered terrace to the pool, and thence the distant landscape beyond. To the west side from this communal space a small separate spiral stair connects above with the family and guest bedrooms and games room on the first floor.

Whereas Aalto at Mairea evolved a distinct collageism, in the view of Juhani Pallasmaa, generally over the composition of key elements and materials, Aalto thus achieved an undoubted harmony through a combination of “contradiction” and “opposition”. But in Dannatt’s view that process “is a metaphor which if consciously applied is likely to degenerate into ‘treatment’”. (ie that “modelling and interest” so beloved of provincial tutors of a certain generation). Collageisme is not so much Dannatt’s way, however, traces remain, say of Arts and Craft Movement materiality, especially noticeable in the smoothly detailed carefully honed brick coursing. More relevantly evident too is Dannatt’s personal affinity to the visual language of his own contemporary, the Swiss abstract painter Max Bill. Here indeed such a degree of  “contradiction” might yet have occurred, but fortuitously rather than “consciously”. The strictly orthogonal, rectangular swimming pool now recalls an early occurrence of the same form at Aalto’s Villa Mairea. But that pool form was early abandoned by Aalto, “morphed-out” over four phases of his overall design6 to a naturally curving landscaped pool, joined closely to the rusticised sauna and linked via that changing facility by a grass-roofed access route to the main house. For Dannatt, to have followed this precedent would have been banale, so consciously to contradict the Max Bill concept of “the rotated square”. So what to do? Dannatt inserts a trace of de Stijl collaging with the small first floor, south-facing window and balcony, which lead the eye inside or outside this insertion, directly over the equally rectilinear pool and so to the landscape beyond. The architect shows here his absolute discretion on a key point of collage as a winning move, decision made.

A major factor in late modern design is nonetheless the free use of quotation. Arata Isozaki uses at his iconic Museum of Contemporary Art, Los Angeles (1984–5), an endearing Aaltoesque wave motion in the profile of his lower level gallery overlooking a small court. In a rather earlier case James Stirling was strongly influenced by the Russian Constructivist Konstantin Melnikov’s Rusakov Workers Club (1927–8) in the block arrangement of the lecture halls at the Leicester University Engineering Building (l963). In both cases the derivation was purely conceptual, but legitimate within the modernist canon. Dannatt likewise still honours some precedent of Aalto in conceptual terms, via the Villa Mairea. But it is in no way a literal sense, for he resists the typological option. So the rectangular pool remains. Also subversively imposing, as always in England, may have been English landscape “picturesque” tradition: such as Lancelot “Capability” Brown’s mid-18th century play with “natural” water features still avidly pursued today and harmonised within golf courses. But Dannatt wisely resists any such deliberate deviation simply to follow a current consumer trend.

This new house now completed can be seen as bringing to fruition all those interacting ideas and influences that Dannatt has absorbed and developed over a remarkable 65 years of practice and participation in modernism. A perceptible risk of complexity, which can intrude, is subtly mitigated by the consistency of that simple but meticulous detailing of brick coursing, fenestration, internal and external joinery, combined with cool metalwork. This fruition seems to emulate, for Dannatt’s later career, just such an “Indian summer” (a typical expression in Sussex weather forecasting of an unforeseen extension of summer into autumn.) And while as considered above Aalto, still remains for Dannatt to be one clear stream of embodiment conceptually, it is this architect’s subtle fusion of all such precedent here, (and also a certain homage to his own contemporary painter Max Bill) that sings out: all incorporated within a superb English rural landscape of ancient trees and sweeping downs. The evolution of the European villa (as from Roman archaeology unearthed palatially at nearby Fishbourne) stands explicitly too in this scheme, typologically extended here into the 21st century by a late modernist. The confrontation of architects of a certain generation by “Postmodernism” was seen recently enough to cause some confusion, even apoplexy. But in this case, given a proactive but perceptive client, Trevor Dannatt, in his wisdom, has once again shown that an adaptive, revising late modernity can always resonate, offering an open future for the past, receptive to client needs, yet perceptive of the past. 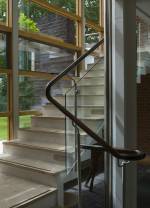 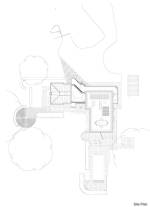