The Amazing World of MC Escher

The Amazing World of MC Escher

MC Escher was long ignored by galleries and dismissed by critics, yet there is arguably no modern artist who has profoundly influenced so many different fields, from cinema to graphic design, mathematics to video games

The relationship between art and the wider world has often been one of imbalance. While individual artists have been keen to absorb influences from many sources, the way these are often ultimately communicated back is through the relatively sealed environments of the private collection and the gallery. Myriad influences flood in, but they often return via narrow channels.

For an artist so concerned with symmetry and paradox, it is both fitting and ironic that the Dutch artist Maurits Cornelis Escher (1898-1972) should have been a victim of critical disparity. For decades, his iconic work has been ignored by galleries and treated at best as a juvenile curiosity by critics. Yet there is arguably no modern artist who has profoundly influenced so many different fields, from cinema to graphic design, mathematics to video games. A fascinating and extensive appreciation of his work at the Scottish National Gallery of Modern Art achieves a much more just equilibrium in the art world’s relationship with this intriguing artist.

Despite being associated with mind-bending flights of fancy, Escher was an artist profoundly wedded to the real world. The memories of his youthful travels in Europe would resonate for decades through his work. In his early depictions of Italian villages, it’s possible to see a type of naturalism edging towards formalism, abstraction and even pixelation. In the Alhambra and Islamic art generally, he found a world of infinity-aiming pattern that informed many of his later explorations, most obviously the tessellations of his Circle Limit series. While he obviously ignored the prohibition of graven images in his work, Escher followed the Islamic view that art could represent a form of paradise. He admitted to being inordinately happy undertaking his prints, longing for a second life to work solely on them. To Escher, this was heaven; a place of serenity where the universal laws of physics were everywhere and yet somehow might not apply. The relative tedium of his native surroundings – he spent most of his life in the Dutch town of Baarn – only pushed him further into the fantastical. In his various self-portraits, often seen in distorted reflections, such as Hand with Reflecting Sphere (1935), he appears in the role of an alchemical scientist scrying with a crystal ball, the confines of his hermitage behind him. Yet it is a sphere that seems to contain the universe.

Escher may have chosen an intimate private world, forgoing much involvement with art movements or social circles, but his outlook was huge. The view of mathematics and science as purely and coldly intellectual exercises is exposed as inaccurate in Escher’s work; they are at work everywhere in nature; indeed, they are how we interpret the cosmos. The first thought examining Relativity (1953) is that it is an impressive impossible construct; a denial of gravity. In fact, it is an examination of gravity, a manipulation of space that contains numerous gravity wells and logical perspectives. Each staircase makes sense to, and functions for, the figure on it. It is only in assembling that they appear to contradict each other. The gaze is turned back on the viewer and the limitations and quirks of how we perceive the world, issues that also become apparent when we ponder four-dimensional shapes or quantum mechanics, for example. We are enveloped within relativity (and circularity) as much as these mysterious ascending and descending figures, albeit with a sense of vertigo they seem to lack.

If Escher is an artist to whom scientists gravitate, he also resonates with purveyors of other disciplines. His tendency to warp reality to make us see the mechanics of reality afresh continually resounds. Philosophers and psychologists have been drawn to the Cartesian aspects of his work; his dreamlike paradoxes that seem to question the limits and formations of consciousness. Film-makers from Alfred Hitchcock to Christopher Nolan have been inspired by his visual perspective tricks. His presence is there in books from Jorge Luis Borges and JK Rowling. Game designers have inhabited his impossible worlds with characters; the latest Monument Valley being directly inspired by his Waterfall (1961) and Belvedere (1958). Indeed, his isometric manipulation of two-dimensional space to appear three-dimensional in a work such as Cycle (1938) had a huge influence on early generations of video games such as Q*bert, Head Over Heels and Marble Madness. In a sense, Escher was designing the landscapes and architecture of computer games before there were even computers.

This strength of influence also highlights what is perceived to be Escher’s weakness; he is viewed as an illustrator of the ideas of others rather than an artist himself. It is true that some of his work has become diminished by overfamiliarity, appearing in optical illusion books, social media confectionaries and camera-obscura exhibitions. The clever and unfeasible reciprocity of Reptiles (1943) or Drawing Hands (1948) is one-note, a note endlessly repeated in drawing guides until it sounds like nothing but background noise. The memento mori of Eye (1946) is technically impressive, but obvious to the point of triteness. Escher has never been entirely forgiven for his popularity in supposedly lowbrow spheres; a fate his contemporary Dali occupies, too, to an extent (Escher’s 1956 Bond of Union being a close parallel of Dali’s work of the same time). There were both too few and too many positions to assign Escher in the art canon; he was too straight and ubiquitous to be an outsider artist, too weird for photo-realism. There’s a strong case to be made that he was a bridge between Japanese woodblock prints and surrealism, between Renaissance perspective studies and op-art graphic design, and bridges get run over.

The joy of this exhibition is that it not only critically places the idiosyncratic artist in many roles, but that it also questions the act of placing altogether. Here is Escher as a modest yet colossal figure, a proto-game designer and a modernist Piranesi, who saw mathematics, philosophy and abundant puzzles in the most unlikely places, both man-made (Ascending and Descending, 1960) and natural (Day and Night, 1938), all around him. “Is it art?” is answered affirmatively, yet it is a self-reflexive wondering and much more interesting questions emerge from it. Where does the doubt or resistance towards Escher come from? Why must there be an either/or between art and illustration? And how self-contained and territorial, if at all, does art need to be from other disciplines? If art can’t include such a figure, or the games and films he inspired, the problem may well lie with it rather than him. 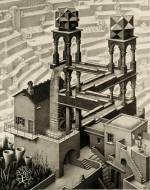 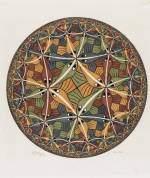 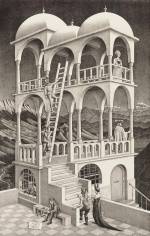 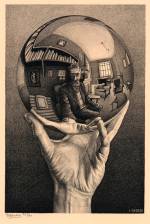