As part of the Artist Rooms series, the Scottish National Gallery of Modern Art in Edinburgh is showing 16 key works by Roy Lichtenstein, spanning three decades and three rooms. His wry sense of humour and memorable images are as relevant today as during his lifetime

In a world in which poor-resolution photographs and tabloid scandals have made obviously pixelated images commonplace, it is interesting to revisit an artist who intentionally used the technique in his work decades ago. Roy Lichtenstein (1923-97) created a series of recognisable and witty artworks that, though clearly far more crafted and pleasing to the eye than the accidental reproduction of a low-resolution photograph, nevertheless provoke a new uncanniness in their modern audiences. Before the internet, it would seem that Lichtenstein was already poking fun at its visual detritus with his panels of Ben-Day dots (a printing process invented in 1879 by illustrator Benjamin Day to reproduce printed images by using dots to recreate gradations of shading).

That may have been accidental, but his wittiness about comic books and the pop culture of his own time was more intentionally on point. In three rooms in the Scottish National Gallery of Modern Art, the works of Lichtenstein (16 altogether, from the gallery’s own collection as well as on loan from the Tate and the Roy Lichtenstein Foundation) inspire wry smiles and a certain fondness, with their tongue-in-cheek humour and dryly presented melodrama concerning the characters of comic strips and even modern art.

In Reflections: Art (1988), for example, in which the word art is spelled out in red with white shadows, set against a yellow background, Lichtenstein comments not only on modern art as an idea, but his own previous work, a painting from 1962, also entitled Art. That original work was itself based on a diagram from a 1958 printmaking manual, Silk Screen Techniques, where the word “art” refers simply to any artwork image to be printed. The print of the painting of the manual image created layers of witticism and, in the case of the later print, a sort of visual trickery, since its audience is made to think that they are seeing the painting through a new frame rather than a print with added “reflections”. Word play, visual illusion and witty reflection on what it is to create are all succinctly merged in this seemingly simple work.

In Lichtenstein’s other works from the Reflectionsseries, such as Reflections on Crash (1990), and Modern Art I (1996), similar techniques and a playful attitude to printmaking expand on this theme. In the former work, the print references an “original” painting that, in fact, does not exist, hinting at issues of what originality and reproduction really mean, while entertainingly giving Lichtenstein a parallel career, perhaps. The work exhibited here from the late 80s and 90s shows not only a retrospective and self-reflective quality, therefore, but also the consistency of Lichtenstein’s vision throughout his career, including, of course, his recognisable wit. The works from the 60s – the comic-book painting In the Car (1963) and Wall Explosion(1965), for instance – alongside the more recent work – including Reflections on Girl (1990), Modern Art I (1996), Composition III (1996) and Roommates (1994) – bear witness to the completeness and variety therein.

Throughout his career, Lichtenstein asked questions about how images permeate our lives and society in general. With the internet and the traffic of images that came with it, his work continues, even without conscious connection to the particulars of our modern society, to question how people relate to their representations and the representations of others. His emphasis on two-dimensionality and the artificial nature of a visual reproduction remains especially interesting; the transformation of people to objects through their representation in visual media was an idea that he played with memorably. As his wife Dorothy Lichtenstein remarked recently, during a talk at the Scottish National Gallery of Art, “[Roy] actually thought women were deeper than men and his work was rather ironic and speaking out against the two-dimensional role society puts women in.”1

He exaggerated the objectification and commodification of women (and people in general) to a point of absurdity, but remained sardonic and stylish in his treatment of the subject, referencing the bizarre melodrama that such characters were attributed, and the strangeness of that common combination of superficiality and overwrought emotionality found in advertising and pop culture. Such an observation remains as relevant now as ever.

The mass reproduction of images was also of great interest to Lichtenstein, along with many of his contemporaries involved in pop art, especially the uncomfortable combination of art and commodified image-making. In his series of prints that engage with the history of art, particularly Claude Monet’s Water Lilies as well as the work of Salvador Dali and Piet Mondrian, Lichtenstein comments on the way in which the fame and mass reproduction of those images affects their meaning. He reframes them, so to speak, by offering pastiches of those works in his own style, and, in so doing, exposes the way in which the many postcards and posters of these iconic works have possibly cheapened them, taking them to the level of mass advertising in their familiarity.

In Reflections: Art, too, Lichtenstein questions, with his signature dry humour and pop style, what indeed it means to create supposed “art”, to create something original, in a world where ideas and images can be repeated to the point of banality and absurdity. That seems a question that has never been fully answered, and remains at the heart of modern, conceptual art today, with pleas of seriousness and originality sounding ever hollow. Even the sardonic wit of Lichtenstein and his contemporaries has been imitated so much that it is hard to imagine a world where modern art and dry humour are not synonymous. To see Lichtenstein’s work and to realise how relevant it remains is also to feel slightly unfulfilled and disenchanted; indeed, has art progressed beyond the pop artists’ satirical glance?

Reference
1. Quoted in Roy Lichtenstein exhibition to open in Edinburgh by Shan Ross, the Scotsman, 12 March 2015. 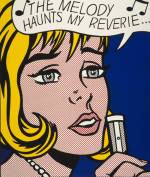 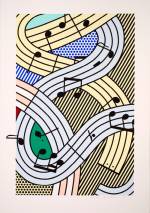 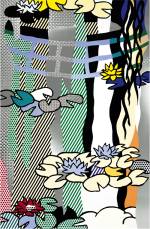 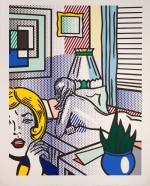